We assume that the United States Constitution would grant a competent person a constitutionally protected right to refuse lifesaving hydration and nutrition. [Majority opinion, Cruzan v. Missouri Department of Health (1990)]

I would have preferred that we announce, clearly and promptly, that the federal courts have no business in this field; that American law has always accorded to the States the power to prevent, by force if necessary, suicide—including suicide by refusing to take appropriate measures necessary to preserve one’s life…. [Judge Scalia (concurring opinion), Cruzan v. Missouri Dept. of Health (1990)]

Because I believe that Nancy Cruzan has a fundamental right to be free from unwanted artificial nutrition and hydration, which right is not outweighed by any State interest, I respectfully dissent. Nancy Cruzan is entitled to choose to die with dignity. [Justice Brennen (dissent), Cruzan v. Missouri Dept. of Health (1990)]

Recent advances in medical technology have enabled hospitals “to keep the human body alive for longer than any reasonable person would want to inhabit it,” as Justice Scalia has wryly put it. As many as 10,000 patients are being maintained in persistent vegetative states in the U.S. Respirators developed over the past two decades are capable of resuscitating people long after they have stopped breathing and suffered irreversible brain damage. Moreover, whereas in the past people inevitably died when they were unable to swallow and digest food, there now exist various methods of artificial feeding that maintain patients metabolically for years, even decades.

Although numerous state courts have been deciding right-to-refuse treatment cases since the well known Karen Quinlan case in 1975, the U.S. Supreme Court confronted its first such case this summer. At issue was the parents’ right to withdraw food and water from their daughter who had been in a “persistent vegetative state” for seven years.

On a cold January night in 1983, Nancy Beth Cruzan lost control of the car she was driving. She was found lying facedown in a ditch, not breathing and without a pulse. Paramedics on the scene, after managing to restore her breathing and heartbeat, transported her to a hospital in an unconscious state. It was estimated that she was without oxygen for 12 to 14 minutes.

Subsequent rehabilitative efforts proved unsuccessful. It was determined that Nancy suffered massive irreversible brain damage; she retained no cognitive or reflexive ability to swallow food or water to maintain her daily essential needs. She was diagnosed as being in a “persistent vegetative state,” a condition in which a person can live for years and years, exhibiting some natural reflexes but no significant mental function. To ease feeding, the hospital implanted an abdominal tube through which she was fed food and water.

After a number of years her parents were informed that she had virtually no chance of regaining her mental awareness. They then requested the hospital to withdraw all nutrition and hydration. The state hospital refused, and Nancy’s parents petitioned a Missouri court for permission to remove her feeding tubes.

The trial court granted their request, but the state appealed to the Missouri Supreme Court which reversed, holding that the parents had not proved by “clear and convincing” evidence that Nancy herself would have desired to refuse food and water under these conditions.

On appeal, the U.S. Supreme Court affirmed, holding that Missouri’s requirement of “clear and convincing” evidence in such cases involving incompetent persons was not unconstitutional.

At issue was Missouri’s procedural requirement that before an incompetent person can be denied lifesaving food and water, the guardians must prove by “clear and convincing evidence” that such deprivation of nutrition and hydration would be the desire and wish of the incompetent.

Although the Cruzans introduced evidence that several years prior to her accident Nancy had casually remarked to an acquaintance that she would not want to live should she face life as a “vegetable,” the Court held that this was not “clear and convincing” evidence of her wish regarding withdrawal of food and water. Furthermore, stated the Court, this evidentiary requirement is not an unconstitutional deprivation of Nancy’s “liberty,” as the parents contended.

The parents also argued alternatively that even if Nancy had not clearly expressed her wishes regarding refusal of medical treatment (in a “living will”), the courts should nonetheless heed the “substitutional judgment” of the family. The Court disagreed. Even though in this case the Cruzans’ motives were perhaps honorable, there is no “automatic assurance” that family members will always have the same view of refusal of treatment as would the incompetent person.

Although the Supreme Court denied the Cruzans’ request because of the absence of clear evidence of Nancy’s wishes, the Court nonetheless affirmed a competent person’s constitutional right to refuse medical treatment, including life-sustaining nutrition and water, even when that person is not confronting imminent death from a terminal illness (see majority opinion quote above).

This alleged constitutional right-to-die is very troublesome for various reasons. First, since a majority of states consider the taking of one’s life as a criminal felony; how can we then distinguish a competent person’s refusal of nutrition and water from suicide? As Justice Scalia properly noted in his concurring opinion, we cannot differentiate suicide from refusal of life-saving medical attention merely because the patient is permanently incapacitated and suffering. Suicide cannot be sanctioned just because the patient or family does not have the patience or fortitude to endure the suffering contemplated.

Secondly, we cannot rely on the false distinction between “action” and “inaction” resulting in death, saying, for example, that suicide is always an affirmative act, whereas refusing nutrition and water is passive. Starving oneself, suggests Justice Scalia correctly, is no different from putting a gun to one’s head.

Finally, it cannot be argued that unwanted (artificial or natural) feeding is an unlawful and unconstitutional violation of one’s “liberty, self-determination, or bodily integrity,” as the right-to-die advocates argue. This is because the state has a recognized interest in preventing suicide—an interest which arguably includes the right and duty of hospitals or medical authorities to invade and pump out the stomach of a person who has, for example, overdosed on barbiturates, despite that person’s contrary wishes.

Accordingly, the Court’s blanket affirmation of a competent person’s alleged constitutional “liberty’ to refuse even nutrition and water when death is not otherwise imminent, seriously threatens the state’s historical interest in preserving life and forbidding suicide.

Self Determination and Death With Dignity

Anglo-American law starts with the premise of thorough-going self-determination. If follows that each man is considered to be a master of his own body, and he may, if he be of sound mind expressly prohibit…medical treatment. The State has no legitimate general interest in someone’s rife, completely abstracted from the interest of the person living that life….

The philosophical and moral irony of such “thorough-going” humanism is that, as in the case of abortion, humanistic arguments are employed to sanction the very taking of human life.

This is not to say, of course, that a Christian patient must endure all heroic and extraordinary medical procedures calculated to prolong life for a few days or weeks. But surely the deliberate withdrawal or refusal of food and water when death is not imminent is essentially suicide or death by starvation, and accordingly is ethically and morally suspect. But healthy and unhealthy Christians should be guided, not by principles of “thorough-going self-determination,” “quality” of life, or the desire for a “dignified” death, but by a prayerful search to discover and submit to the will of the sovereign Giver of Life. 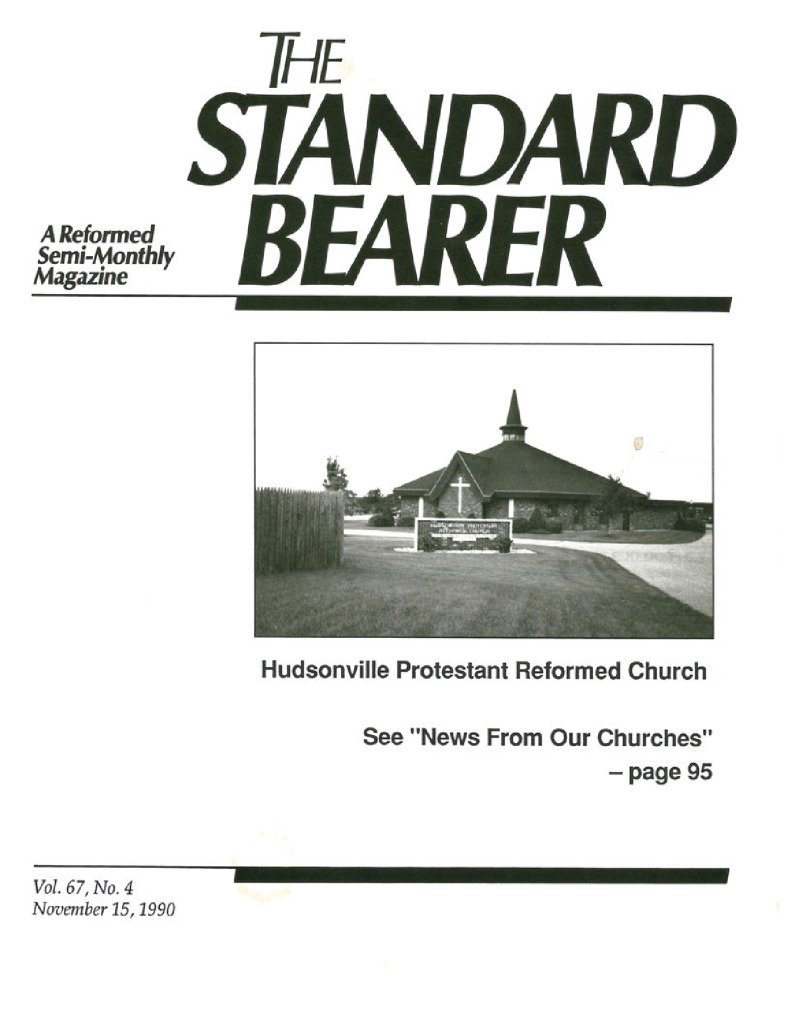