Suffering Because of Slander

Suffering Because of Slander

This is also a great evil upon the earth.

Then our enemy is not after our body so much as he sets himself to tear our soul in pieces.

And the damage is done. And there is almost no remedy against its devilish poison. You can cry against it and give testimony of the truth of the matter: it is of no avail. At least as long as the Judgment Day is far away.

There is nothing the devil invented that is as efficient as slander. It is gladly believed by all of us. We are inclined rather to believe the evil than the good of a person.

Yes, you can cry against it, but all such crying is weak. It is far better never to cry against it, that is, to the ears of man. The more you give testimony to man that “mine integrity” that is in you; the more you are torn asunder. The impression is made and you are powerless to uproot it.

The only remedy against slander is to tell it to God.

Cry to God and you will be healed of the tearing and clawing of your soul.

That is what David did in the Seventh Psalm.

It was occasioned by the “words of Cush, a Benjamite.”

We do not know its history. Neither does it make any difference.

I am glad that this psalm is found in the bundle of spiritual songs. It points the way to the only remedy against the poison of slander.

In this instance the slander amounted to this: this Cush told about David how he supposedly had rewarded evil for good. There must have been a person who was at peace with David. And Cush told the story around that David had played a dirty trick on that peaceable person.

Now the truth of the matter was that David had acted just in the opposite way. He had rewarded good for evil. He delivered a certain person who was his enemy without cause at all. In other words, he had acted as a child of God should always act.

Well, you can imagine the result. Slowly on this rotten story came to the ears of David: “Did you hear, David, what Cush the Benjamite, is telling about you? He tells it all around that you have played an evil trick to so and so; you know, David, that man is really at peace with you”. And you ought to hear, David, what the people think about you. They think it vile of you, that you have supposedly done this. There are others David, who do not exactly believe the story, but all the same, there are many who do believe in it!”

Can you imagine the result for David’s peace of mind?

Small wonder that David complains to God regarding enemies that try to tear his soul in pieces. He cries for help, because there is none to deliver. You know, as a rule we have enough to do about our own interest than to go out of our way to try to deliver the brother out of the hand of the slanderer. No, there is none to deliver. And mind you, David means that there is none at all who concerns himself about him who is torn by the devilish “words of Cush”.

Therefore David does the one sensible thing: he turns himself to God.

And let me assure you that this is the only and best way too. It does not help at all to turn to man. You will find that there is none to deliver.

O what wondrous consolation in going to God and saying to Him: Thou knowest Lord that this thing is not true. O comfort me then; speak to my heart of Thy wonderful love and lovingkindness. Pour Thy balm in my wounds for my soul is torn and rent in pieces by these devils!

It is clear from the text that David was not guilty.

Clear, because David tells God that if he really did this thing it would be alright to him to have his enemy persecute his soul, tread down his life upon the earth and lay his honor in the dust.

I assure you that if you are guilty you will never dare to say such things to God. Oh yes, to man you may be able to say great and lofty words. You may calmly and haughtily assure and affirm, be it ever so stoutly. But to God? Ah, but that is different. God knows it all.

But that is also the reason why you will finally grow calm again. That is, if you are really innocent. Tell the Lord that you have not done it and that He knows it; and I assure you that you will arise from your knees strengthened and comforted.

Hear David: Lord, if I really did it, then let a just and swift punishment find me! It is the language of innocence that is speaking.

From verses 6 and 8 we note in this connection David is gladly remembering that after all God is the judge and not man. He calls for the judgment day, nay more, he calls for that judgment now. He knows that God judgeth every day, even now, while David is being slandered in Israel.

He has realized that God’s own work of righteousness and integrity are present in his heart and that God certainly will never disallow His own work in David. He knows that God will glorify His work in David so that God be blessed forever.

All this history made David weary of the wicked life on earth.

Harken to him: Oh let the wickedness of the wicked come to an end!

It is the daily cry of the righteous. I assure you that this life is a continuous death. Death in our members that are upon the earth. Perfect death in heart and mouth and all the manifestations of vain men that surround us. He who has the power of death with his deathly host of devils about him to torment us as the day is long—I assure you that life at its best is but miserable.

Therefore, O God! let this wickedness speedily come to an end; but establish: Thou the righteous and the upright in heart!

And He does. And He shall continue these paths of equity and justice.

For He is angry with the wicked every day.

Go to now, you common grace enthusiasts! The Lord is angry with the wicked every day.

And the Lord gives testimony of this anger. He explains to us in unmistakable language the preparations for the final issue of this anger of God. God will whet His sword; God has bent His bow, and made it ready. In other words, when God beholds all the wickedness of the wicked, He delights to look upon His vengeance, that is, everlasting death in hell. He has already prepared the bow. God has prepared the instruments of the death of the wicked. He ordaineth His arrows against the persecutors. Even the present persecutors of David.

What terrible truths. I do not wonder that foolish men have for thousands of years endeavored to blunt the piercing sharpness of God’s arrows. Grace for the wicked. Forsooth!

And God is just. He does not judge unrighteously.

Listen: the object of His anger is described for us. And the picture is also true to life. Even your life and my life. This is the picture that is drawn for us by the Holy Ghost: He travaileth with iniquity, and hath conceived mischief, and brought forth falsehood.

No doubt David is still thinking of his slanderer. But the picture fits any and all ages and peoples and tribes that are disobedient to the heavenly vision of God in Christ Jesus the Lord. It is a picture which you may recognize with a shudder on all sides about you in the world. And sometimes also in the church of God.

It is the picture of wicked man under the imagery of a woman who is travailing with child.

That is, whatever the picture may portray, this is sure, his whole being is engrossed with it, even as a woman whose only thought is with the child she bore and now brings forth. There are no side issues in such a ease.

And such is the wicked, the reprobate.

His child, the occupation of his entire being is very iniquity, mischief and falsehood.

How sweet is the picture which the Holy Ghost draws of the true child of God. Because of Jesus in him he may humbly confess his uprightness of heart and his -integrity as we hear from the lips of David.

And even though also this psalm bears a strong Messianic stamp, so that only in Jesus Christ this integrity and uprightness finds its entire and central fulfillment, still, a principle of these virtues is also found in the man that is recreated in the image of that Son of God. It may be a small principle but it is there. And here I would exclaim: if that small principle is so wondrous and miraculous in its sweetness, what must the harvest be!

When Jesus came into our heart, the old leaven of falsehood and iniquity received its deathblow and honesty and purity were engrafted. And the life from above speaks and thinks and lives in every one of God’s own.

And the end of that people is in the words of this psalm: the praise of the Lord according to His righteousness. It shows that all the virtue of the Christian is rooted in the righteousness of God. The end is God’s praises. And the heart of the sweet singer of Israel has grown tranquil again. There is harmony in his heart. Harmony with God’s own voice.

Harmony that is heavenly, because whether you are listening at the gate of the new Jerusalem or listening at the cave of David, you will hear the same strains: I will sing praises to the name of the Lord most high!

And the elders and the beasts and the multitude join this anthem of praise. And the angels sing the choruses.

To such a theme all the people say: Even so, Amen! 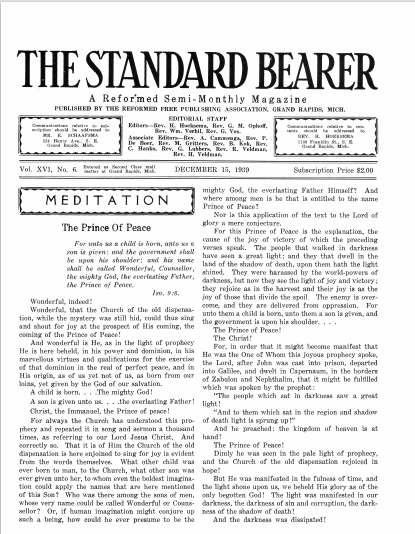