It stands to reason that when one writes a short article on the above mentioned subject he can not enter into every detail hence, several things must be taken for granted. Not having chosen this particular subject myself the undersigned does not know what was exactly in the mind of him who assigned it. Hence, it is very well possible that to a large extent

I will miss the particular point which was in the mind of our editor-in-chief who assigned all the subjects to the various contributing editors.

When we speak of submission to church government we have assumed already that there is such a thing as church government. We will not try to prove at length from Scripture that this is so but we go out from the assumption that there is. After all our readers are no little children who have never heard of church government. Let it suffice therefore that I quote one text from Scripture which plainly teaches that there is church authority and hence church government. I have reference now to the well-known text in Matthew 16: “And I will give unto thee the keys of the kingdom of heaven: and whatsoever thou wilt bind on earth shall be bound in heaven; and whatsoever thou shalt loose on earth shall be loosed in heaven. “Our reformed fathers have always explained this text, and that in connection with a host of other passages in Scripture, that the exalted Christ has given the Church authority, the power of the keys of the kingdom. We might also remark that our confessions deal with the subject of church government and church authority. In this connection we might mention Lord’s Day 31, which discusses the subject of the keys of the kingdom of heaven, while Lord’s Day 40 deals with the subject of authority and obedience as based upon the fifth commandment. Furthermore our articles of faith speak e.g. about the subject of church government in articles 30 and 32. And, finally, our reformed churches have their own church order which in more than eighty articles gives rules, regulations and stipulations for church government.

We should furthermore keep in mind that Christ is the supreme ruler of His Church. He holds the keys of the kingdom, He rules, decides, demands, lays down the laws. He opens and He shuts.

However, Christ has charged His office bearers on earth that they execute His commandments. In other words the church government rests with the officebearers. And they can and may do nothing else but execute the will of Christ which He has revealed in His Holy Word. Therefore the Bible is the guiding rule for church government. Church government must be in harmony with the principles of Scripture, the Church must always execute the will of Christ and always ask: “Lord, what wilt thou that we shall do.”

Furthermore, it is the conviction of reformed believers that the local church is autonomous. The highest authority in the church, under Christ, of course, is not the congregation, but the consistory. Of course we do believe that the various churches which are one in confession should together form a denomination of churches. And in our Protestant Reformed Churches we distinguish between three different kinds of church gatherings: Consistory meetings, Classical meetings, and Synodical meetings. However, the power of the broader church meetings is not a higher power but a delegated power to which the local churches subject themselves voluntarily by mutual agreement. Therefore the highest authority in the churches is the consistory and although the broader gatherings also exercise a certain authority, this is not of a higher kind and it is not dictatorial at all but more of an advisory nature as far as the local church is concerned, and of a delegated character as far as the common interests are concerned. We cannot enter into these things at present, we merely mention them.

And, finally, the church governs only in its own sphere and over its own subjects. Perhaps this sounds like a superfluous remark. However it is not, think of the conception of the Roman Catholic Church which even today, if it could, would subject to itself the power of the State.

Now, as to the question “must we submit to church government?”, the answer is of course an unequivocal: “YES!” That is rather self-evident. As well as a child must submit to his parents, as well as the citizen must submit to the civil government ruling in its own sphere, so also must a church member submit to church government. All this follows from the nature of the case. Scripture tells us that we must submit ourselves to the God-given authorities. God is a God of law and order in every sphere and domain of life. Hence the individual member must submit himself to the government of the local church, the local church must submit itself to the government of the Classis and Synod, provided of course that the latter stay within their own very limited domain.

Life teaches us, however, that many a time those who should submit themselves to church government, refuse to do so. This is often the case with discipline cases. Those found guilty by the church will deny the charges or ignore the decisions and demands of their own consistory, the latter being often times supported by the classical and synodical gatherings. In such instances the church has no outward power to compel the recalcitrant member to submit to its government. The civil authorities have the sword and can enforce their laws, the church has no sword but comes with the power of the Word, of the keys of the kingdom. But the keys do not administer bodily punishment, they bring no man in jail, they do not kill. The power of the church is of a spiritual-ethical nature. Knowing this the recalcitrant member also knows that the church cannot punish him bodily, or fine him or force him to confess his sin, or submit to its government. He must voluntarily, willingly, by way of persuasion submit to church government, but no church can ever force him.

But are there no consequences connected with insubordination to the church? Of course there are. If the recalcitrant party refuses to submit to church government the church will at long last excommunicate him and declare that he has no part in the kingdom of heaven. Hence, the consequences are very serious indeed. Or if the insubordinate person refuses to be governed by the church, he merely withdraws as member from that church and by that very act he no longer belongs to the jurisdiction of that church. Of course withdrawal is usually, although not always, a cowardly act, it solves no problem, it clears up no case, it settles nothing before God.

However, even so not all is said that should at least be mentioned in this connection. (Perhaps much more should be said but our space is limited). In the first place we must keep in mind that the church through its office bearers is certainly not a perfect and infallible institution. The church can make mistakes, errors, the church can do wrong. Therefore we reformed people believe in the right of appeal. Submission to church government is not and should not be a blind submission, that would be hailing the hierarchical system of Rome. In the second place no one should submit to church government, and in this connection I mean certain rules, regulations or decisions, when he is convinced in his soul that the church is positively wrong. Then the word of the apostles counts: “We must obey God rather than man.” Because in such instances the church no longer speaks the Word of God and functions as the agent of Christ but lords it over the flock. Submission must indeed be refused when the church demands things that are in conflict with the Word of God.

In the third place we also like to emphasize once more that the church only governs in its own sphere and none need to submit to the church when that church arbitrarily demands submission to her in respect to things that lie outside of her domain.

And, finally, only when the church wants to be nothing else but the instrument of Christ, submitting herself to the Word, and when the members have a supreme desire to be obedient unto Christ, we can expect the ideal relationship between the members of the church and the office bearers whom Christ has invested with authority. For then the governing church will seek to glorify Christ, love the truth, maintain justice and be never a pleaser of men. And on the other hand then those who must submit themselves to church government will do so gladly, cheerfully, in the consciousness that the church seeks their spiritual and eternal well being. 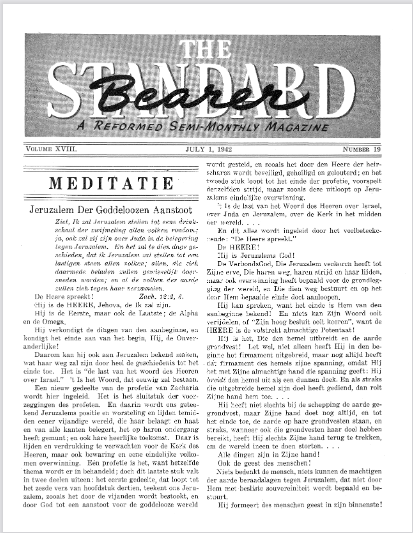