In the Concordia issue of April 26, 1951, appears another article by brother Van Spronsen of the Netherlands. I wish to quote from this article, also and particularly as it reflects upon recent happenings in Hamilton, Canada. I do not write this because I wish to throw additional oil upon the fire, but only for the sake of the truth and the record.

First, I refer to the following in the brother’s article, and I will underscore that to which I wish to call attention, page 6, first column, third paragraph: “Of course it is too bad that it goes that way, and if those people come to visit us we want to receive them cordially, even let them partake of the Lord’s Supper, still more, we even like to correspond with them, within certain limits, but by all means keep them apart and separate.”—end of quote. Now I do not know whether the brother refers to what may have happened in the Hamilton Protestant Reformed Church. The possibility exists that he may have received information from members of that church. I repeat: this I do not know. One thing is sure, however: the brother must have received some information to this effect. Why should he otherwise write this? And it is a fact that this did happen in the Protestant Reformed Church of Hamilton. I wish to say something about this. At the end of the particular quotation which appears in the brother’s article this expression occurs; but by all means keep them apart and separate, Brother Van Spronsen, we permitted people to attend the Lord’s Supper before we admitted them into our fellowship for their sake, to gain them, and not to keep them apart and separate. We will at present let the question rest whether it was exactly proper and correct to do what we did (our people will certainly understand our difficult position because of the steady influx of these immigrants), but the fact remains that we did this for the sake of these brothers and sisters in the Lord. I am quite willing, brother, to give an account of our action and explain it, but do not deem it necessary at this time. And what was the result of this action by the Hamilton consistory? What did the immigrants say? This: if we permitted these people to attend the Lord’s Supper they would say: they do permit us to attend the Lord’s Supper, but we may not become members; and, when we did not immediately accept them into our fellowship they would say: they do not wish to accept us as members but we may come to the Lord’s Supper. On the one hand they would criticize us because we permitted them to come to the Lord’s Supper, and, on the other hand, we were criticized because we did not accept them as members. If we did not immediately accept them as members they would tell us that we had no right to permit them to attend the sacrament; and if we would not permit them to partake of the sacrament we would be told that we refuse brothers and sisters in the Lord to eat and drink of the body and blood of Christ. But I repeat: we took the action we did for the sake of these brothers and sisters in the Lord.

Another expression in the article of brother Van Spronsen upon which I wish to comment is the following (page 6, third column), and again I underscore: “For I see many misunderstandings. I refuse to accept, e.g., what brother Reitsma writes in that same article, namely, that there are Liberated immigrants in Canada who teach “that God loves all the children who are baptized and would save them all,” and that “Christ at least merited the chance of salvation for all.” I hold myself recommended to receive the addresses of these Liberated brethren and sisters. They aren’t there.”—end of quote.

I wish to comment upon this also. I realize that brother Van Spronsen quotes here a statement of brother Reitsma. And that brother is well able to defend himself. However, the same statement has also been made by the undersigned in previous articles in the Standard Bearer. In fact, the undersigned has asked brother Van Spronsen to comment upon them. Until now he has not done so. I consider this statement of the brother as also an answer to what I have written in the past. And now he has the boldness to declare that this is not true. He refuses to accept what brother Reitsma wrote. He writes boldly that “they aren’t there,” Brother Van Spronsen, anyone who is acquainted with the things we experienced and heard in Canada must simply be amazed at what you write in this particular article. You say: “they aren’t there.” Brother, let me assure you that they are here, and that there are many of them. The undersigned once visited a brother and asked him: Do you believe that ‘God says to each child: I love you and wish to save you, and he answered: That is what I believe. This was said in the presence of two elders of the church of Hamilton. Others were also present. Statements such as: God loves all the children; God wishes to save all the children; God elected and reprobated upon foreseen faith and unbelief; Christ died for everybody (once I spent two hours at a place and the largest part of the time was taken up by a discussion whereby I sought to prove to them that Christ died only for the elect); John 3:16 and Matt. 23:37 quoted in support of a general love of God, were all made in the presence of witnesses. Why should I name the persons individually as brother Van Spronsen requests? Most of them have since then changed their address. Does not Brother Van Spronsen believe me? I am convinced that the members of the Hamilton consistory would not have the courage to deny the truth of the statements which I have attributed to these immigrants. Once, when the statement was made that God would save all the children, and it was remarked that in that case man would be stronger than God, the person answered: Well, yes, if you put it that way. Brother Van Spronsen, these things are true. I heard them repeatedly in the year of 1950. And therefore I call your action in your article: strange doing.

However, for the benefit of brother Van Spronsen I will now be a little more specific. We visited once last year a family in Orangeville, Ontario. I preached there in the house, and after the service we discussed our churches and the truth. The undersigned was asked the question relative the infants who die in their infancy. In the course of the discussion the statement was made that God elected and reprobated upon foreseen faith and unbelief. I showed them from the Canons that this was Arminian. Then the statement was made that God loves all the children. I asked the party whether God loves the same child when, after arrived at the years of discretion, he w6uld reject the word and gospel of the living God. Of course, the answer was in the negative. But they did wish to maintain that the Lord loved him when he was a child. When I asked the question finally how it was possible for God to love a person when he was a babe and later hate the same person after he had become eighteen years of age, the parents hesitated but a boy of some 13 years of age intervened with the remark: that is impossible, because then God would be changeable. Brother Van Spronsen, this is a fact. I am writing this because you asked for it. This was said in the presence of witnesses. In fact, at one of our later visits to the same place one of the older girls remarked that the Bible is full of the general and universal love of God. Why do I write this? Because I would have it clearly understood that I wrote the truth in my previous articles. Brother Van Spronsen, remarks such as I have quoted in this paragraph and in the preceding are not reformed, have never been reformed, but are Arminian.

Another thing. The brother writes in his article that he sees many misunderstandings. Now I wish to ask him this question: Will you please show us where we misunderstand you and the view of the Liberated? Brother, do you have any doubts as to what we believe? You know what the Declaration means. I am convinced that Professor Schilder knows what it means. I am also convinced that the immigrants in Ontario, with whom we have been in contact, know what this document means. I am sure that there is no misunderstanding as far as our position is concerned. But, what do you believe? Have we not asked Prof. Veenhof more than once to explain statements which he made in his writings? Why is it that we do not receive an answer? What objection do you have against our doctrine and please give us the grounds for your objection.

Finally, is it not rather strange that not one word has been written by a writer in the Netherlands in connection with the action by the Hamilton “Protestant Reformed Church” whereby they first suspended and later deposed a Protestant Reformed minister, who, according to the testimony of the entire consistory, never said one word which, in their opinion, was in conflict with scripture or the confessions? And, brother, you know the history of this utterly wicked and scandalous deposition. It was therefore with mixed emotions that I read the following statement in your April 26 article: “And it is also because of that that they can so easily suspend and depose office bearers.” Brother, we are fighting for the truth. The immigrants themselves here have said that the Liberated and the Protestant Reformed conception cannot exist side by side. We are not fighting for a truth. We are not fighting for the definition of a word, such as the word: covenant. We are not fighting for a personal idea, one or more persons’ opinion or opinions. We are fighting for the truth of God’s eternal and sovereignly particular grace, for the truth that God loves only the elect, would save only the elect, and will save only and surely all the elect. We are no “genadewinkeltjes” but are resolved to keep that which we have. Tell us, please: what do we teach in conflict with scripture or the confessions? 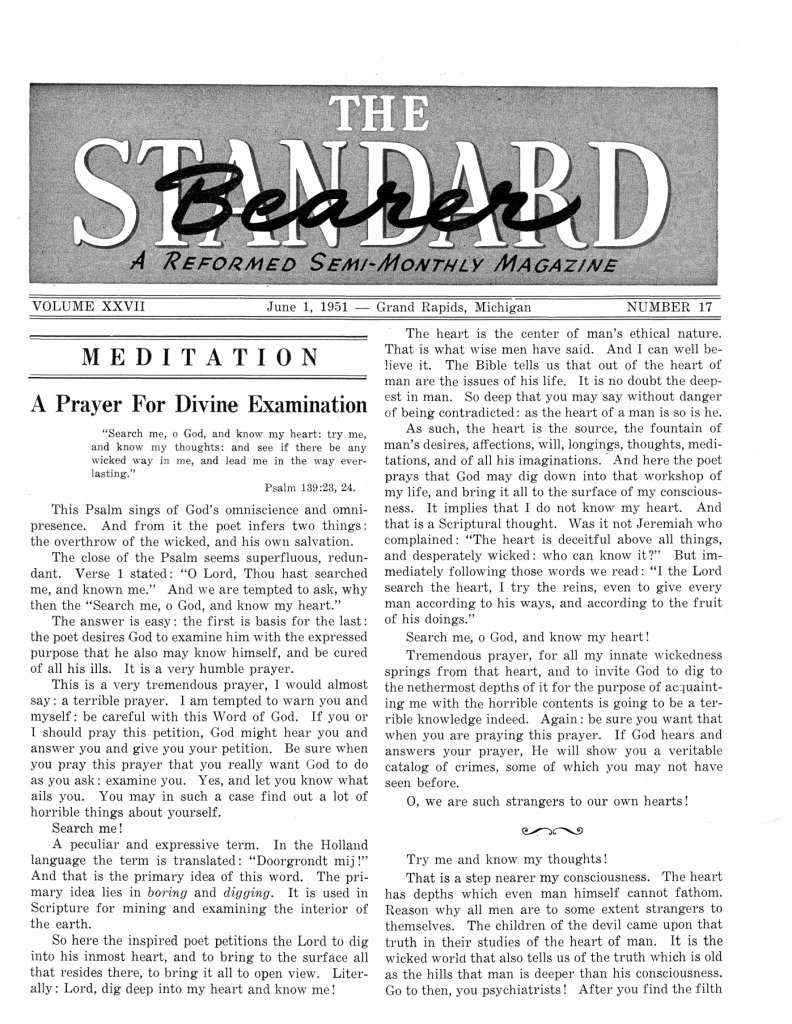