In an editorial in our November 15, 1981 issue I criticized the Editor of The Banner for editorially decreeing that articles 27-29 of the Belgic Confession are non-functional in the Christian Reformed Church. Literally he wrote: “And the kind of thinking about the church that is recorded in the Belgic Confession is no longer functional in the Christian Reformed Church.” I suggested that this was contrary to the Formula of Subscription as well as contrary to the adopted gravamen procedure of Editor Kuyvenhoven’s denomination.

As it turned out, Editor Kuyvenhoven met with criticism from within his own denomination also. And in The Banner of December 7, 1981 the Editor takes cognizance of this criticism that he “did not do justice to the Belgic Confession” and states: “I will try to say more clearly what I had in mind.”

Now frankly, my impression is that Editor Kuyvenhoven stated things rather clearly, and even bluntly, in his first editorial on this subject. And my impression is, too, that in his editorial of December 7 the Editor is not hi& usual clear and forthright self. He does not address himself directly to my criticism; nor, in my opinion, does he clearly answer his critics in “Voices.” Nevertheless, it seems plain to me that the Rev. Kuyvenhoven has not retreated from the position for which I criticized him, namely, of writing off the Belgic Confession without benefit of gravamen and contrary to the Formula of Subscription. If that is not his position, let him plainly state this and let him retract his original statement. Then we will at least have clarity.

In the first place, the Rev. Kuyvenhoven goes to the heart of the matter in the first part of his editorial when, he writes as follows:

The Reformers and the Belgic Confession know two churches, one true and one false. They also, know some sects, but these have no right to the name “church.”

Can one know the difference between, the true church and the false church? Yes: “These two Churches are easily known and distinguished from each other” (Art. 29).

Today nobody thinks in terms of two churches—real, down-on-earth churches—of which one is true and the other false, and nobody would say it is easy to distinguish between the two. In the October editorial I said that we surrendered this point of view with finality when we adopted the word “denomination.”

From these lines it is plain that Editor Kuyvenhoven is maintaining his claim that “the kind of thinking about the church that is recorded in the Belgic Confession is no longer functional in the Christian Reformed Church.”

Twice more the Rev. Kuyvenhoven confirms the fact that he still holds Articles 27-29 of the Belgic Confession to be non-functional.

First of all, referring to the use of the word “denomination” and its introduction into the Revised Church Order of the CRC, Editor Kuyvenhoven writes:

This is what I meant when I said that the views of the Reformers and the thought patterns of the Confession are no longer ours. If Christian Reformed people thought and spoke in confessional terms, they would call Billy Graham a preacher without fixed charge and the Protestant Reformed Church (should be: Churches, HCH) a sect. But we don’t do that.

Now without commenting on the advisability of the change in the Church Order to which the Editor refers, I must say in general that I do not share his aversion for the word “denomination.” He calls it “a bad word—as bad as the word ‘layman.’ ” I find it a rather innocent word, as well as necessary. After all, it only means “a group of churches of the same name.” Thus, the Christian Reformed Church is a denomination; the Protestant Reformed Churches are a denomination; the Orthodox Presbyterian Church is a denomination. What is wrong with this? To be sure, as soon as that word “denomination” is given a specific identity, it also becomes incumbent upon the Reformed believer to apply the test of the marks of the true church and to make a judgment accordingly. The problem, it seems to me, does not lie in the word “denomination” but in the failure to adhere to Article 29 of the Belgic Confession. Meanwhile, it is plain again from the paragraph just quoted that Editor Kuyvenhoven maintains that the Belgic Confession, 27-29, is neither functional nor functioning in his denomination.

Incidentally, the Editor is quite welcome to call our Protestant Reformed Churches a sect—on one condition, namely, that he can prove it by applying the test of the marks mentioned in Article 29. At the same time, I would seriously urge him to apply that same test to his own denomination and to take earnest cognizance of the test-results.

Once more the Editor takes the same position, principally, when he suggests that the confession should be rewritten:

We meet these evangelicals with a confession about a true church that is to be known by three marks: true gospel preaching, right administration of the sacraments, and faithful exercise of Christian discipline. These marks are important, also today. But they are very formal signs of the true church. Article 29 also gives the marks of true Christians. These are recited less frequently among us.

If the Reformed churches would take their confession seriously, they would now say in their own words what they believe concerning the church of Christ. Such a new confession would not invalidate the Belgic Confession, but it would articulate the same faith in a situation that was unimaginable at the time of Guido De Bres.

Notice, first of all, that the Rev. Kuyvenhoven wants the confession of the church rewritten; he wants a new confession. And he claims that such a new confession would not invalidate the Belgic Confession, but would simply “articulate the same faith in a situation” that is different from that in which the Reformers lived and in which our confessions were composed. But this is impossible for three reasons. In the first place, Editor Kuyvenhoven has already in effect declared the Belgic Confession invalid: it is non-functional in his denomination. How, then, can a new confession about the church ever express the same truths as does our present confession? In the second place, it is exactly the nature of confessions that they give expression toprinciples of truth. But principles do not change, but are applicable to all changing and changeable situations. Why then would a new confession be necessary? In the third place, Editor Kuyvenhoven exaggerates the difference between the situation in the time of Guido De Bres and the situation of our own day. It is true, of course, that since the time of the Reformation denominations, all claiming to represent the church, have multiplied vastly and that there are many more than at the time of the Reformers and the time when our confessions were written. But we must not imagine that in Reformation times the situation was as simple as Editor Kuyvenhoven pictures it to be. For one thing, there were not only the churches of the Calvin Reformation and the Church of Rome. There were also the Lutherans and the Zwinglians. And while there were indeed significant differences between the latter and the churches of Geneva, the Calvinists, nevertheless these three recognized one another, had contact with one another, and certainly did not exclude one another from the true church, while they were at the same time united in their condemnation of Rome. For another, we must remember that there soon appeared differences in the family of the Reformed churches. These differences were, of course, partly national and geographical. But in the nature of the case there were also differences as to the confessions which the various churches eventually adopted. There were even serious differences as to the form of church government in some of the churches. Now it is true that today the number of these differences and the number of denominations is vastly multiplied; but that is only a difference of degree, and it is a process of multiplication which, in fact, began with the Reformation itself.

We must, therefore, insist on applying the principles of our Belgic Confession to today’s situation. There is no need of change, let alone the fact that Reformed churches in general would today not be spiritually and doctrinally strong enough to write a sound confession about the true and the false church.

Finally, I am perturbed about Editor Kuyvenhoven’s view of the marks of the church. True, he says they are important. But he calls them “very formal signs of the true church.” The contrary is true. These marks are not mere formal signs. They are essential.

The reason why these are the marks is connected with the very nature of the church. The church is built upon the foundation of the apostles and prophets, of which Jesus Christ is the chief cornerstone. There simply is no other foundation possible—not for the true church! If the church is to be built, it must be built on that foundation. And whoever proclaims anything else than the pure doctrine of the gospel is not building upon that foundation; he builds on another foundation, and he builds a mere human institution. It pleases Christ to call and to build His church through the preaching of the Word. Men may raise all kinds of objections against preaching and against sermons—as they do nowadays. They may devise various glamorous substitutes for the preaching of the pure doctrine of the gospel. Or they may corrupt and adulterate that pure doctrine of the gospel. The fact remains that it pleases Christ to gather His church through the preaching of His own Word. You can never change that! Where the Word is preached, there is Christ; there is the voice of the Good Shepherd; there the sheep hear His voice; there they follow Him; there He gives them eternal life! This we must never forget!

For remember: the church needs Christ! It is only in living connection with Christ, the Christ of the Scriptures, that the church is the church, and that the members possess the life of Christ. And the only contact which we have with Christ as long as we are in this present world is through His Word (not man’s word), through His sacraments, and through Hisgovernment and discipline. Where these are missing, Christ is missing. Where they are corrupted and to the extent that they are corrupted, there the members are being separated from contact with Christ their Head, and there the church must either repent or perish!

This is the life-and-death seriousness of this entire question of the marks of the true church! 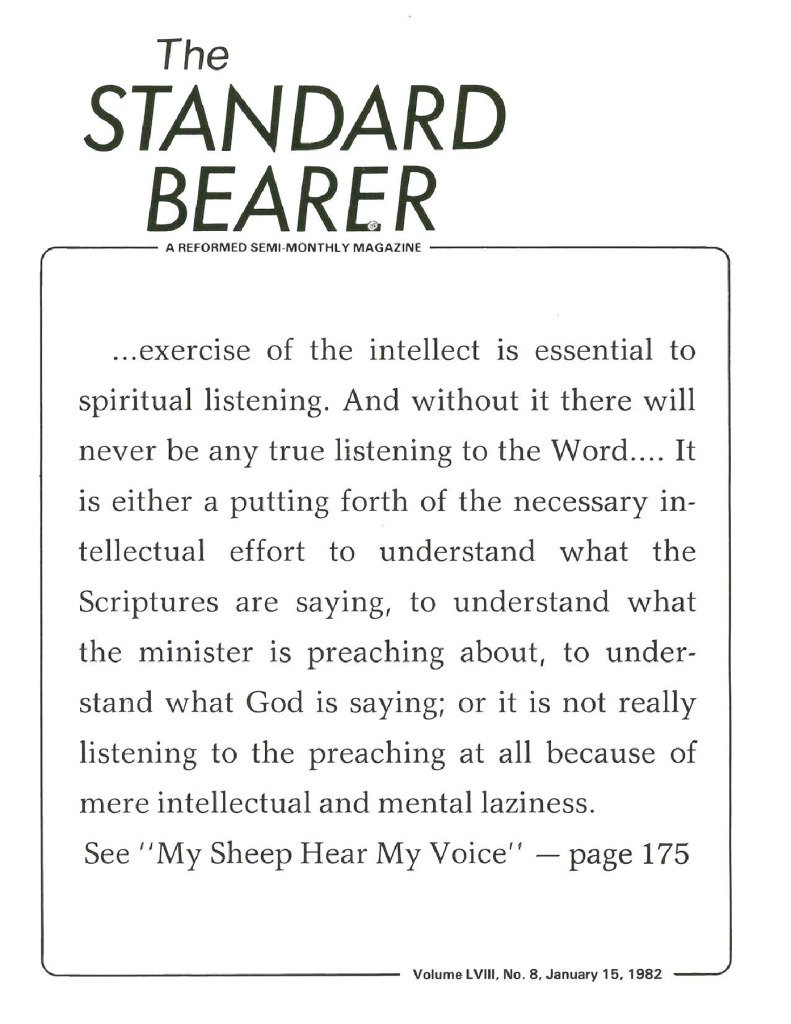