THE SHINING FACE OF STEPHEN Acts 6:15

There stands Stephen before the entire Sanhedrin. All the eyes of all the members of this Jewish court are fixed upon him. The text says “they gazed upon him all . . . . . and they saw”, that is, while they gazed on him they saw something very significant on the face of this man who had been forcefully hauled into their court. They saw his face as it were the face of an angel!

As the writer relates this scene he only records what the impression was of those who saw him. He does not tell us anything more of the nature of this strange and wonderful countenance of Stephen; he does not tell us how this face had received this wonderful appearance. However, we cannot escape the conclusion that this face reflected the glory of the risen Christ, the glory of the heavenly, already in the earthly. For the Spirit of God and of glory rested upon him, to be sure. (I Peter 4:14) Do we not read that the opponents in the synagogue of the Hellenists could not resist the wisdom and the Spirit by which he spake? (Acts 6:10) And was he not one of the seven who were “full of the Holy Ghost and of wisdom?” (Acts 6:5) There must be some connection between Stephen’s spiritual relationship to the risen and glorified Lord of glory, and the angelic appearance of his countenance! And that was the glory this Jewish counsel beheld. Was this Sanhedrin not led by Annas, Caiaphas, the Sadducean high priests and the rest? And had they not had before them another man, the Christ of God, whom they had condemned as worthy of death because he said he was the Son of God? (Matthew 26:63) Well, here stands a man before them who reminds them of the words of this Jesus Who said, “From now on ye shall see the Son of man seated at the right hand of power, and coming in the clouds of heaven.” (Matthew 26:64)

Were not the very heavens “opened” here as a completed state and fact, and would not Stephen see the Son of Man standing at the right hand of God. Are these “wolves” not now reminded here of the “LAMB” whom they had slain, from the countenance of Stephen, and presently from his lips?

It is a glorious hour for Stephen.

For this wicked Jewish court this is something dreadful to gaze upon. For this Sanhedrin has a covering over their heart so that they cannot, believingly see the more excellent glory of grace. They do not understand that the glory of the law which killeth, hath no glory by reason of the greater glory of God. (II Corinthians 3:10, 11).

On the face of Stephen is reflected the “sign” of the Son of Man, Whom Daniel sees in the night visions upon his bed, and Who came in the fulness of time and ascended on high, and who now continues this work here on the streets and in the synagogues of Jerusalem, from out of heaven. For here in this courtroom will clash the mountain in Arabia, which leads to bondage (Sinai) and the heavenly mount Sion, Jerusalem above, whither Jesus, the Mediator, has ascended! (Heb. 12:24; Galatians 4:21 ff.)

For the children of Sarah are free!

The children of the desolate are more than of her who hath the husband! (Galatians 4:27; Isaiah 54:1)

ARE THESE THINGS THUS? Acts 7:1

In the mouth of this Jewish Sanhedrin this question was meant to be a pretended, formal question of a court which would introduce formal inquiry into the justice or injustice of the charge before them. For the charge and accusation is of the worse degree. It is a charge of wilful, uninterrupted blasphemy with which Stephen here stands cited. He had not ceased to speak words against this holy place of the temple and against the law, as given by Moses and all the prophets!

Stephen stands here contemned as being a heretic who is worthy of death. He speaks contemptuously of all that is held holy by God, so it is alleged. This was all implied in his preaching Jesus of Nazareth, Who was preached as having been delivered for the offenses of the sins of God’s people and having been raised for their justification. This meant that the temple had been broken down, and had been rebuilt by Jesus in three days, and that now the ceremonial laws had been superceded by a better covenant, based upon better promises. It meant the fulfillment of the Abrahamic promises “in thee shall all nations be blessed.” (Galatians 3:8, Genesis 12:3)

This question was possibly not meant by the high priest Caiaphas in this pregnant sense. It was possibly meant on the low level of a mere formality. This man was to be processed by the court. His doom is prejudged by this high-priest without a doubt. But God has a higher and more important cause and purpose. Stephen must stand here before this Sanhedrin—a testimony unto them!

Stephen need not become anxious and distracted as he stands here suddenly before this counsel. He will presently address them, refute them, condemn them with the Word of God, the sword of the Spirit. For it is not Stephen who speaks, but the Spirit of our heavenly Father is speaking through him, by his lips. And the Scriptures will be opened; the true meaning of Israel’s place as a nation will be set in bold relief; it will become evident that now truly the “Romans shall come and take away both their place and nation.” Their place and nation was taken away at Calvary! Their house is left desolate as a Jewish nation. For God does not dwell in temples made with hands!

Jerusalem, Jerusalem, that killeth the prophets. Here is where the Lord was crucified. It is the city which is spiritually Sodom and Egypt, both wicked and enslaved. But to them were the oracles of God entrusted. And they shall hear these Scriptures of which they have been custodians, and which Scriptures, though read by them every Sabbath, are neither understood nor believed!

Yes, these things are thus, though in sense at once far more exalted and glorious than this petrified priesthood in Jerusalem and the accusers understand!

Shall Stephen deny the meaning of the blood of the Lamb of God which is the fulfillment of the promise? Shall he gloss over the cruel and unbelieving opposition of the reprobate Israel at every step and juncture of the history of God’s Covenant?

He will confess Christ before men, and be confessed by Him before the Father in heaven!

THE CHIEF POINTS OF STEPHEN’S APOLOGY

Perhaps it is important that I first say just a word about the term “apology” as I employ it here, and as it is a fit term to express the answer of Stephen (?) to the Sanhedrin. The term comes from the Greek language. It literally means: to speak away from. That means that the speaker is on the defensive, one might suggest? I would rather say that good “apology” is very offensive in nature. It is positive defense of the truth of the Gospel, of God, His truth, His judgments, His salvation, His love, and His glory. It is never used in Scripture in the sense in which in our English parlance it generally comes to mean “an admission of error or discourtesy accompanied by an expression of regret.” (Webster)

In our present writing it means nothing more and nothing less than a “formal justification.” In the Bible the term is translated “answer” in I Corinthians 9:3, II Timothy 4:16, and I Peter 3:15. It is translated “clearing of one’s self” in II Corinthians 7:11. Finally, it is translated “defense” in Acts 22:1, Philippians 1:7, 17. In each of these cases it is ever taken in the positive sense, and never in the sense of expression of admission of error and regret.

Here we have true “apologetics!”

It is the apology of the ‘Lord Himself who has a “controversy” with sinners.

We may well write above this “apology” of Stephen the words of the prophet Micah “Hear ye, O mountains, the LORD’S controversy, and ye strong foundations of the earth; for the LORD hath a c-o-n-t-r-o-v-e-r-s-y with his people, and he will plead with Israel.” (Micah 6:2) For the Lord is here speaking by the Spirit of the risen and glorified Christ; and it is truly “controversy” of the highest order, full of the majesty of Christ. Here is truly an ambassador of God who says: be ye reconciled to God, as if God were speaking through him. It is here not a cheap hawking of the Gospel, but a pointing out of the tragedy of unbelief in Israel’s history, and an identification of these unbelievers with the unbelief of the reprobate Israel, to their eternal condemnation. This is the majestic triumph of which Paul speaks when he says, “Now thanks be to God, which always causes us to triumph in Christ, and maketh manifest the savor of his knowledge in every place. For we are unto God a sweet savor of Christ, in them that are saved and in them that perish: to the one we are a savor of death unto death: and to the other the savor of life unto life. And who is sufficient unto these things? For we are not as many, which corrupt the word of God: but as of sincerity, as of God, in the sight of God speak we in Christ.”

Such is the very bone and marrow of Stephen’s apology.

It is truly the controversy of the living God with Israel to whom the oracles of God were entrusted.

Was not that the preeminence of the Jew? (Romans 3:2)

But now there is the great confrontation. It is the confrontation of all Jewish legalism and particularism with the Gospel of the Promise to Abraham as uttered by the Lord of glory and with the universality of the Gospel to all nations, tongues, tribes and people.

The question is not who has the “Law” (Old Testament Scriptures) but rather who interprets the Scroll of the Book correctly; who gives the sense of the Spirit of prophecy and of fulfillment, Stephen or these Hellenistic Jews, Saul of Tarsus included! And in this Apology we are given an excellent case study,” incidentally, of good and sound Hermeneutics, (science of interpretation) solid and irrefutable exegesis, valid and legitimate conclusions. Besides, we have here the true viewpoint of any preacher who addresses the church of God in the world at any time, as elect and reprobate, believers and disobedient, the chaff and the wheat, as they are organically connected in the church of God in the world! Here is key-power of the highest order, opening the kingdom to believers, and closing it against unbelievers!

This controversy of the Lord as executed in the trial and apology of Stephen touches on the following points.

1. The giving of the promise by the “God of glory” to Abraham as it is for all nations, sketching this history up till the time of the law-giving through Moses. (Acts 7:2-16)

2. The time of the fulfillment of the promise by delivering Israel out of Egypt through Moses, and the giving of the law and the building of the tabernacle according to the pattern shown Moses on the Mount. (Acts 7:17-40)

3. The history of apostasy of Israel from Moses till the Babylonian captivity; the sin of idolatry and departure from the worship of the temple and its subsequent destruction. (Acts 7:43)

4. The true temple of God, the type shown Moses on the mount, in its fulfillment in the spiritual temple of God’s church. (Acts 7:49)

5. The Sanhedrin and all fleshly Israel placed in the class of those who always resisted the .Holy Ghost, being disobedient and unbelieving to the promise of God to Abraham, as this promise is gradually unfolded in the temple-worship, the shadows and types. 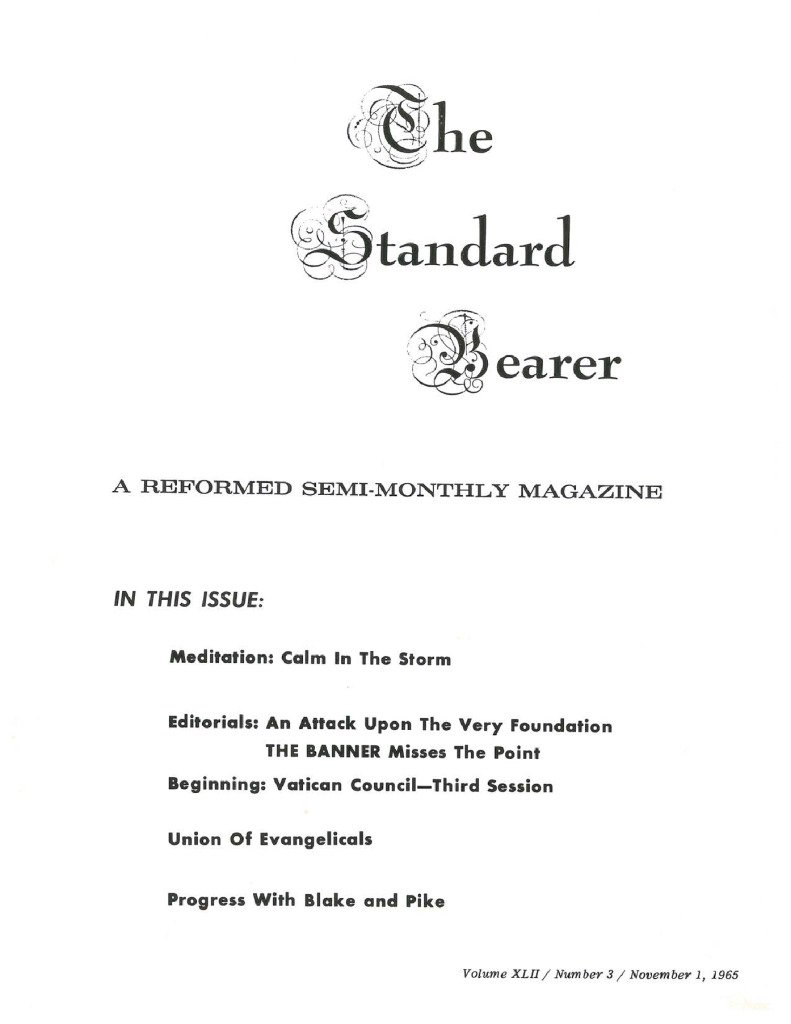