For some time now there have been growing tensions between the increasingly liberal Gereformeerde Kerken of the Netherlands (GKN) and a sister denomination in South Africa, the Gereformeerde Kerk of South Africa, sometimes referred to as the “Dopper” church. The latter is the smallest of the three Afrikaans churches. These tensions have had their occasion partly in the fact that the Gereformeerde Kerken of the Netherlands supported the World Council of Churches’ special fund to combat racism, and partly in the heresies in the GKN which have been tolerated and allowed to go unrestrained and undisciplined. Depending on whose news reports one read, sometimes it seemed that the former item was the chief reason for the tension (in connection, of course, with the whole controversy about apartheid in South Africa); and sometimes it seemed that the doctrinal aberrations in the GKN constituted the chief irritant. Personally, I tend to think that the two issues are not unrelated, both being facets of the growing liberalism in the GKN. And now these tensions have ended in an official break, a break initiated by the South Africa Church.

A Standard Bearer subscriber in Johannesburg, South Africa kindly sent me two clippings about this subject from The Star, a daily newspaper in that city.

“The Gereformeerde Kerk, smallest of the three Afrikaans churches, has decided to sever all ties with its sister church in Holland.

“The decision to break off relations was made in Pdtchefstroom last night by the general synod of the Kerk.

“The severing of bonds will have far-reaching implications, and brings to an end a relationship between the Afrikaans church and the Gereformeerde Kerk in the Netherlands which started in 1859. (Note: if this data is correct, it would mean that the original bond was established even before there were any Gereformeerde Kerken. The latter were established in 1892 through a merger of the secession movements of 183 4, the Afscheiding, and the secession under Kuyper in 1886, the Doleantie. HCH)

“The synod took the decision after considering a report by a committee which recommended the break.

“The decision is to be conveyed to the synods of the African and Coloured churches of the Gereformeerde Kerk, as well as the Reformed churches in New Zealand, Australia and USA.

“These last are also considering breaking ties with the ‘mother’ church in Holland.

“The decision to break off relations was made because of ‘heresies’ by some church members in Holland because the Dutch church supported the World Council of Churches’ special fund to combat racism.

“The acceptance by the Gereformeerde Kerk at its synod recently that according to Holy. Scripture racially mixed marriages cannot be regarded as unlawful or forbidden is highly significant.

“So too is the decision on common worship that no person should be excluded from participating in the life of the church on grounds of race or color. (Note: These decisions, of course, must be understood against the background of the South African apartheid policy and controversy. HCH)

“And while these decisions might have been long overdue for some, they might also have put other noses out of joint.

“For while the more powerful Ned. Geref. Kerk is not opposed to mixed worship, it remains firmly against mixed marriages.

“The Nederduitsch Hervormde Kerk, second largest of the three Afrikaans churches, is opposed to both mixed marriages and mixed worship.

“One man who is delighted about many of the decisions his church took is Professor Tjaart van der Walt, one of South Africa’s most eminent theologians.

“As head of the department of New Testament at the theological seminary at Potchefstroom and at Potchefstroom University, Professor Van der Walt has his finger on the pulse of developments in the annals of the Afrikaans churches.

“For the Gereformeerdes at Potchefstroom it was a tough decision to make and, as Professor van der Walt says, any split which severs ties of more than a century is serious.

“But even more serious, he says, are the reasons behind the decision to break bonds with the Dutch church.

“Behind the split is the fact that the Gereformeerdes here became deeply unhappy about the ‘radical and unreformed views and heresies’ of some ministers, theologians and professors of the church in Holland.

“One such man was Dr. Herman Wiersinga, a minister in Amsterdam who said that Christ did not die on the cross for our sins, but that it was more a shock tactic.

“This, says Professor van der Walt, touches on the deep significance of the Cross and the Crucifixion—the very core of Christianity.

“Another reason was the fact that the Dutch church decided to support the World Council of Churches’ special fund to combat racism.

“The Gereformeerdes in South Africa felt this was supporting ‘violence’ of liberation movements in Southern Africa.

“Another matter which played an important part in the decision to split was the report on homosexuality by some Dutch ministers. This report suggested that not only should homosexuality be considered, but that congregations would also have to accept a homosexual minister who was living with a man in the rectory.

“Professor van der Walt believes any attempts to reconcile the two churches will be difficult.

“He does not regard the decision to split as moving towards isolation. Instead, he is happy with the Gereformeerde Kerk’s international relations with other churches—especially other reformed churches overseas.

“He says too that the church’s missionary work in South Africa is a manifestation of Christian unity.

“He is also happy with the decisions which the synod took—particularly those about mixed marriages and common worship.

“He believes that his church is moving in the right direction in other areas. One of these was his church’s critical stand on the issue of migratory labour.

“And while he believes his church is beginning to face up to socio-political issues, he would like to see the church become radical and outspoken.

“He prays for the day when his church and all other churches in South Africa will meet on a common platform.

“But however satisfied Professor van der Walt may be about the mood and direction of the synod, some of its own members believe the Gereformeerde Kerk will have to alter many more of, its attitudes if it hopes to be reconciled with organizations like the South Africa Council of Churches and other churches overseas.

“The Gereformeerde Kerk still has strong reservations about mixed marriages in South Africa, and churches overseas, including its former ‘sister’ church in Holland, still accuse it of supporting the Government’s policy of apartheid and separate development.”

We can only applaud the decision to sever relations with the GKN. It was long overdue. And this holds true not only for the Gereformeerde Kerk of South Africa, but also for all Reformed denominations which have maintained ties with the GKN. It also holds true for the Reformed Ecumenical Synod, which until now has not shown the courage to enforce its own constitution and its own anti-World Council advice. From the point of view of the principle, the GKN has long ago and in many ways forsaken the doctrine and discipline which constitute the very basis of unity for Reformed churches. It was, therefore, wrong—principally wrong—for other Reformed churches to continue in any kind of unity with the GKN. And from the point of view of practice, the fact that others continued to maintain ties with the GKN has only afforded the latter the opportunity to introduce its corrupt leaven into other Reformed communions. Frankly, I have no expectation that the GKN will be moved to return from its evil ways; but perhaps the breaking of ecclesiastical ties will contribute to stemming the tide of liberalism somewhat in other Reformed churches.

Meanwhile, in my opinion there are ominous signs that already all is not well in the South Africa church. The talk of being radical and outspoken and of facing up to sociopolitical issues has the all-too-familiar ring of the liberalism which has already infested other Reformed denominations. 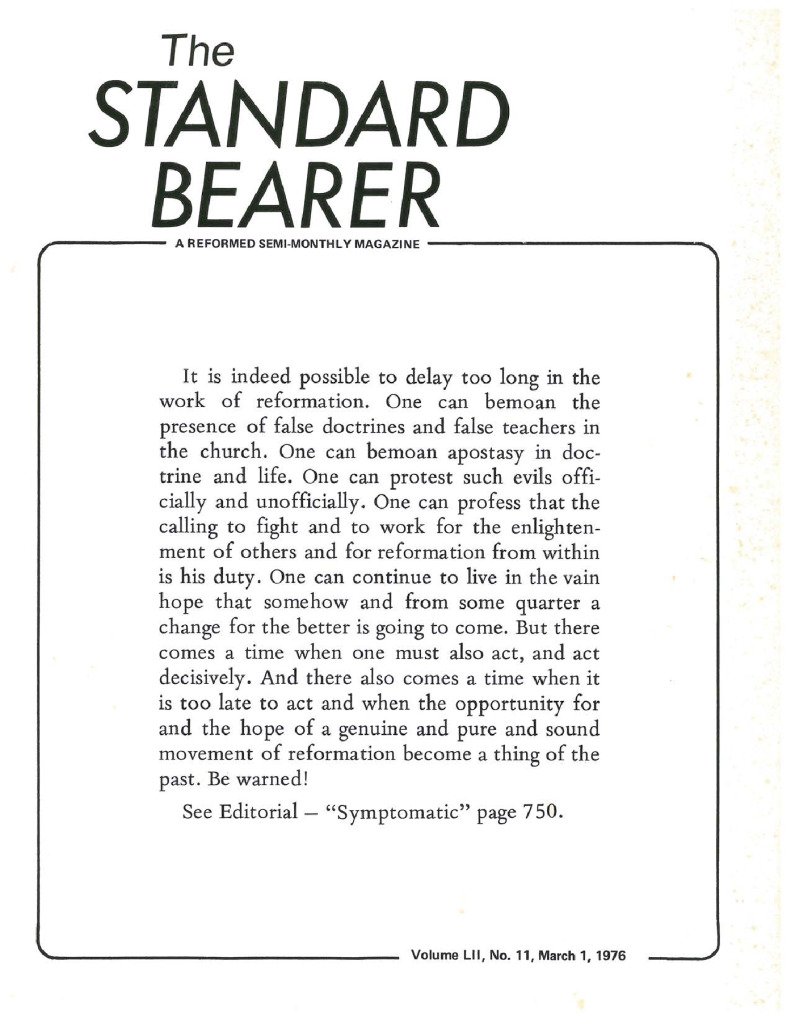