We live in a modern society that disdains God’s gift of life. Of course, it is generally not the case that human beings have such contempt for life that they have no desire whatsoever to live. Most people want to remain alive and healthy, and would extend their lives if they were able (so long as life goes according to certain criteria). Nevertheless, society at large has contempt for life as a gift from God. That is because, as soon as one admits that God has given him life, he would also have to admit that such a God must be served (cf. Rom. 1:20). But, society refuses to serve God, and therefore professes, “It’s my life to live as I please!” In contrast, by God’s grace we confess: “That I with body and soul, both in life and death, am not my own, but belong unto my faithful Savior Jesus Christ.” Our life is not ours to determine how we live and die; we belong to God, who created us and redeemed us with the precious blood of His only-begotten Son. Society’s disdain for life as God’s gift manifests itself in a multitude of ways. It is true that the entirety of an unbeliever’s life is rebellion against God. But, this rebellion becomes especially evident when people reject God’s will and decide for themselves to end either their own life or the lives of others. All life is given by God, and therefore is owed to Him and is to be used in His service; murder and suicide rebel against this principle.

Society’s disdain for life as God’s gift is manifested, firstly, in its murder of children in the womb. We con­fess that God has given us life, knitting us together in the womb. The psalmist says, “My substance was not hid from thee, when I was made in secret, and curiously wrought in the lowest parts of the earth” (Ps. 139:15). Already in the womb, there was an “I” being made in secret, a human being with a personality. Just because that personality is not expressed as vividly as when he or she matures, or just because a child in the womb is not able to care for himself/herself does not take away from the fact that he/she is a person. What a horror, then, that society would deem that children in the womb may be killed by abortion. The World Health Organization estimates that worldwide there are 56 million abortions per year (35 abortions each year for every 1,000 women aged 15 to 44).1 By the numbers, the horror of abortion in modern society goes beyond many pandemics.

Not only is society’s disdain for God’s gift of life man­ifested in its attitude toward its youngest members in the womb; the fact that many contemplate, attempt, and car­ry out suicide shows the same disdain for life. The World Health Organization estimates that some 800 thousand people die from suicide every year,2 and many more con­template and attempt it. Although we may not realize it, many of us reading this article have friends or acquain­tances who have contemplated suicide.

As believers, we confess with the inspired apostle Paul that God is the giver of life: “he giveth to all life, and breath, and all things” (Acts 17:26). Of course, God not only gives life and preserves it; He also takes it away at His appointed time. When God took all ten of Job’s children in one day, Job confessed, “.the Lord hath taken away” (Job 1:21). The psalmist understood this also: “thou takest away their breath, they die, and return to their dust” (Ps. 104:29).

Although the authority to give life and take it away is ultimately God’s, it is becoming more and more acceptable in our society actively to end one’s life. It was once considered a horrible sin to attempt or commit suicide; more recently, it is seen only as a sign of mental illness. The point is not that mental illness plays no role in sui­cides, but that the rebellion of sin is minimized.

Not surprisingly, such disdain for life as God’s gift has also come into the realm of the aged and infirmed. Many who face life-long debilitation or the prospect of a slow and painful death (for example, terminal can­cer) believe they have the right to end life on their own terms with physician-assisted suicide. Some call it “aid in dying” or “death with dignity;” but, whatever the name, assisted or not, suicide is condemned by God. The sixth commandment requires that I not “dishonor, hate, wound, or kill my neighbor” and also that I “hurt not myself, nor willfully expose myself to any danger.”3 The sixth commandment clearly includes a prohibition of suicide. Not that suicide is unforgivable; but, like all murder, it is a dreadful sin.

As regards abortion, a couple might not hate their unborn baby in the sense that we normally think about hatred. But, they view their unwanted child in econom­ic terms: “If we have to care for this child, we won’t be able to pursue our desired careers and have the standard of living we want.”

Similarly, much has been written about quality-of-life issues with respect to suicide and assisted suicide (not to mention involuntary euthanasia). Some define quality of life by their physical, or emotional, or mental health. If they should experience excruciating pain, they might imagine they have the right to end their lives, even though palliative care would be effective in mitigating their suffering. Understandably, people often refer to terminal cancer and Alzheimer’s in these discussions. Some have declared they would not want to continue living once their Alzheimer’s resulted in no longer being able to interact meaningfully with their family. Others (young and old) measure their quality of life by their friendships; if they become lonely, they deem their life not worth living. In short, if people’s expectations for quality of life are not met within certain limits, they have little or no desire to continue living.

‘Quality of life’ thus becomes the determining factor as to whether people will be happy or not. Never do the wicked ask, “What has God ordained for me?” or “How will God have me submit to this circumstance?” The wicked want nothing to do with submission to the will of God; they will determine for themselves what standard has to be met in order for them to be happy. Indeed, when one reads the literature concerning as­sisted suicide, “death with dignity” is largely about autonomy. People want to determine for themselves what quality of life is acceptable and then how, when, and where they die when their standard is not met.4 The ‘quality of life’ idol thus takes God’s place in the minds of those who desire to take their lives. Their concern is not God’s government over body and soul, life and death; rather, their concern is with their own ‘right’ to govern life and death. In many ways, (assisted) suicide is one last fist in God’s face that says, “Not Your way; my way! I belong to myself.”

In contrast, the Christian approach to life and death is the truth “that I with body and soul, both in life and death, am not my own, but belong unto my faithful Savior Jesus Christ.” What a wonderful truth for the living and dying saint to meditate upon!

Knowing that we do not belong to ourselves, we sub­mit to God’s will of decree and His will of command, “willing and ready henceforth to live unto Him.” Liv­ing unto Him, involves the whole of our lives, up until the time that God takes us out of this world. Living unto Him, we will acknowledge that God determines our calling to love Him and our neighbor.

That we are not our own means we do not have the authority to determine for ourselves how we live, or how and when we die. God, in His providence, might fill our bodies with painful and debilitating cancer. He might afflict us with Alzheimer’s so that fellowship with family seems impossible. We might feel like a burden to our families. But, we are not our own when it comes to deciding what quality of life is acceptable. In all these circumstances, we continue to belong to our faithful Savior Jesus Christ, who so preserves us that without the will of our heavenly Father, not so much as a hair can fall from our head. Indeed, all things that afflict us are subservient to our salvation.

Although different saints in Scripture struggled with questions of life and death (for example, Job and Jeremiah),5 especially the apostle Paul exemplifies a right attitude toward life and death. Through his many God-given trials, he learned to be content in whatsoever state he found himself (Phil. 4:11). As he contemplated life and death, the Holy Spirit put this confession in his mouth: “For to me to live is Christ, and to die is gain” (Phil. 1:21). What a lovely confession in whatever cir­cumstance we find ourselves. On the one hand, we con­fess that to remain in this life is for the glorious purpose of knowing, and serving, and enjoying Christ. On the other hand, death is gain; it is “an abolishing of sin and a passage into eternal life” (Lord’s Day 16).

The apostle struggled with both the desire to depart from this life and to remain: “For I am in a strait be­twixt two, having a desire to depart, and to be with Christ; which is far better: Nevertheless to abide in the flesh is more needful for you” (Phil. 1:23-24). This re­minds us that until God takes us out of this world, it is more needful for us to remain. A disabled saint or an el­derly saint might consider themselves to be a burden to family and church. But, God keeps them in this world for the time being because it is more needful. Their continuing presence in this world serves the good of the church and the glory of God. It does that, for example, by giving them opportunity to speak to others about their hope in God. Similarly, it gives opportunity for others to be blessed as we minister to them. God will determine when it is best for us to depart out of this life and when to remain is more needful.

Exactly because we belong to God, we do not dis­dain life or seek to end it. Rather, we value life as a gift from God. Glory be to Him for the life He has given us now and the glory that awaits us!

4  See for example, the book A Dignified Ending by Lewis M. Co­hen. 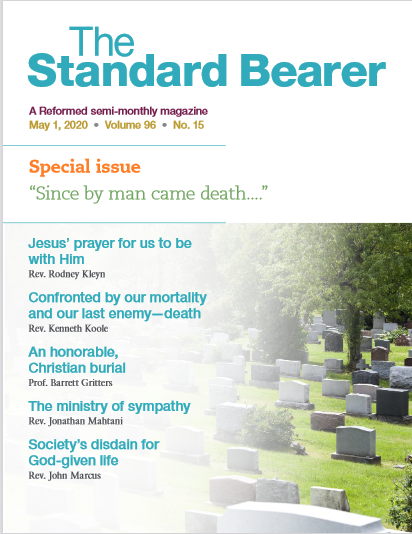