Thy Church rejoices to behold
Thy judgments in the earth, O Lord;
Thy glory to the world unfold,
Supreme o’er all be Thou adored.
Psalter #260, 4 (Psalm 97:8, 9)

Psalm 97 is not usually listed as one of the imprecatory psalms. Every list of them is different, but Psalms 35, 69, 109, and 137 are psalms that are always included. Certain parts of them are “considered to be among the most troublesome passages,”1 but nearly all the psalms contain imprecations.

Imprecations are curses. The imprecatory psalms are those in which the author wishes or pronounces evil upon others, evil from God, asking Him to curse and destroy evildoers. They are very specific in what is asked, as for example that the little ones of Babylon might be beaten to death against the stones (Ps. 137:9), and that this be the happiness (blessedness) of those who carry it out. They are not just wishes and prayers, however. Because they are part of the inspired Word of God, they are in fact God’s curses and pronouncements of judgment and destruction.

These psalms are not popular. C. S. Lewis, in his Reflections on the Psalms, has a whole chapter with the title, “The Cursings,” in which he calls these imprecations “devilish” and sinful and denies that they reflect the attitude of God.2 In other words, Lewis refuses to believe that they are the inspired and divine Word of God.

What is worse (we expect no better from Lewis’ brand of Christianity) is that most of the modern church world has rejected these curses, if not explicitly, then by implication. They are no more liked by most Christians today than they were by Lewis.

Pick up any modern hymnbook and you will see what I am talking about. Hymns rarely speak of God’s judgments and never in the same terms as the psalms. It is difficult to find in any hymnbook a reference to these judgments, much less to our praying for them and rejoicing in them.

I have on my shelf the Worship and Service Hymnal that was used at one time in the Reformed Church of America.3 In it are 543 hymns, mostly traditional hymns, and a few psalms. Of the 543 only four speak at all of God’s judgments, and the strongest of them with the rather mild words, “Then before our King the foe shall disappear.”4 There is nothing in them of the imprecations that are everywhere in the psalms.

Indeed, you would hardly know from the majority of hymns that there is a day of judgment coming, that all unbelief and wickedness will be destroyed and God’s enemies forever punished. There is no evidence in the hymns that “the church rejoices to behold [God’s] judgments in the earth” or that the coming judgment day is expected with “most ardent desire” by God’s people as a part of their joy and blessedness. You would think from the hymns that God never pronounced a single word of hatred, curse, or destruction.

In its de facto denial of God’s wrath and judgment, the modern church is only following the example of Isaac Watts, who did more to destroy the singing of Psalms than anyone else and who also denied the inspiration of such imprecations, considering himself in his emasculated versions of the psalms “more of a Christian than David.”

In his metrical versions of the psalms, he said of the imprecatory parts of Psalm 69, the same psalm that has Christ’s own words as the crucified One in it, “I have omitted the dreadful imprecations on his enemies.” Of Psalm 92: “Rejoicing in the destruction of our personal enemies is not so evangelical a practice; therefore I have given the eleventh verse of this Psalm another turn.” He considered Psalm 137 and others not “so well suited to the spirit of the gospel” and omitted them entirely in his version.5

Our own Psalter6 is somewhat weak at this point. While usually not omitting the imprecations, it does at times weaken them, as for example in its metrical version of Psalm 137, where the words “Happy shall he be, that taketh and dasheth thy little ones against the stones” are rendered, “How happy he who shall repay the bitter hatred of her foes.”

If we believe these psalms to be the inspired Word, then our attitude toward them must be different from that of C. S. Lewis. We must take the position of Calvin, who says in his explanation of Psalm 137: “We are to notice…that the Psalmist does not break forth into these awful denunciations unadvisedly, but as God’s herald.”7 Then, we view them as “profitable for doctrine, for reproof, for correction, for instruction in righteousness, that the man of God may be perfect, throughly furnished unto all good works” (II Tim. 3:16, 17).

But why sing them? In some ways we have already answered this question, but we should be as clear as possible about the reasons. Interestingly, the great English theologian and high Calvinist William Ames answered this question nearly four hundred years ago and gave three reasons. He offered them in answer to the question, “How may we sing those Psalms aright, which contain dire imprecations in them?”

8. A. 1. We may upon occasion of those imprecations meditate with fear and trembling, on the terrible judgments of God against the sins of impenitent persons.

9. 2. We may thereupon profit in patience and consolation, against the temptations which are wont to [habitually] arise from the prosperity of the wicked, and affliction of the godly.

10. 3. We may also pray to God that he would hasten his revenge (not against our private enemies but) against the wicked and incurable enemies of his Church.8

There are some points in Ames’ words that are worth emphasizing. In his first point he mentions the fear of God, something sadly lacking in modern Christianity, and something both necessary and valuable—necessary in that it leads to the knowledge of God (Prov. 2:5) and valuable in that it is the beginning of wisdom, of knowing how to serve and glorify God in every area of life (Prov. 9:10).

The second thing mentioned is the problem that Asaph faced in Psalm 73 and that is indeed a habitual problem for God’s people, that the wicked prosper in their wickedness and the righteous suffer. Singing of the just judgment, the wrath and curse of God, is a reminder that all will be right in the end, and for that reason, too, the church does indeed rejoice to behold God’s judgments evident in history and recorded in the imprecatory psalms.

In 10. 3. Ames makes the very valuable point that this is about God’s enemies, not about our private enemies. We may sing these imprecations and sing them joyfully without violating our calling to love our enemies by doing good to them that hate us and praying for those who despitefully use us and persecute us (Matt. 5:44). We leave, then, the matter of the judgment of those who do us wrong with God, while rejoicing in His righteousness and justice.

One modern writer puts it this way, “Hatred may be moral repugnance not personal vengeance,”9 and that, I believe, is to the point. There is no need, when singing these psalms, to hesitate, with the thought that we may only be expressing sinful and inappropriate feelings of our own.

Then, too, the word of Christ dwells in us richly (Col. 3:16), for the psalms and not human compositions are the word of Christ. The psalms are His word in a very special way, in that in them He Himself speaks personally of all that He experienced as our Lord and Savior when He was touched with the feeling of our infirmities. Any doubts of that are laid to rest by Psalm 69, one of the major imprecatory psalms, and a psalm in which He speaks plainly as the suffering Savior.

What is more, when Christ’s word in the psalms, including these imprecatory psalms, is sung, then He joins His voice with the singing church, as Psalm 22:22 and Hebrews 2:12 remind us. Then He too, the one through whom God executes His just judgments, carries out the word of His curse, destroys all wickedness, and rejoices with His church as she beholds God’s judgments. It is better to join our voices with His, even in singing of terrible judgments, than with men who deny the inspiration of these judgment words.

6 The Psalter (Grand Rapids: Eerdmans, 1927), p. 324. This is the metrical version of the psalms originally copyrighted by the United Presbyterian Board of Publications in 1912.

8 William Ames, Conscience with the Power and Cases Thereof (no publisher’s information: 1639), “The Fourth Book of Conscience Concerning the Dutie of Man Towards God,” p. 44.

9 John Piper, “Do Not I Hate Those Who Hate You, O Lord” (http://www.desiringgod.org/articles/do-i-not-hate-those-who-hate-you-o-lord). 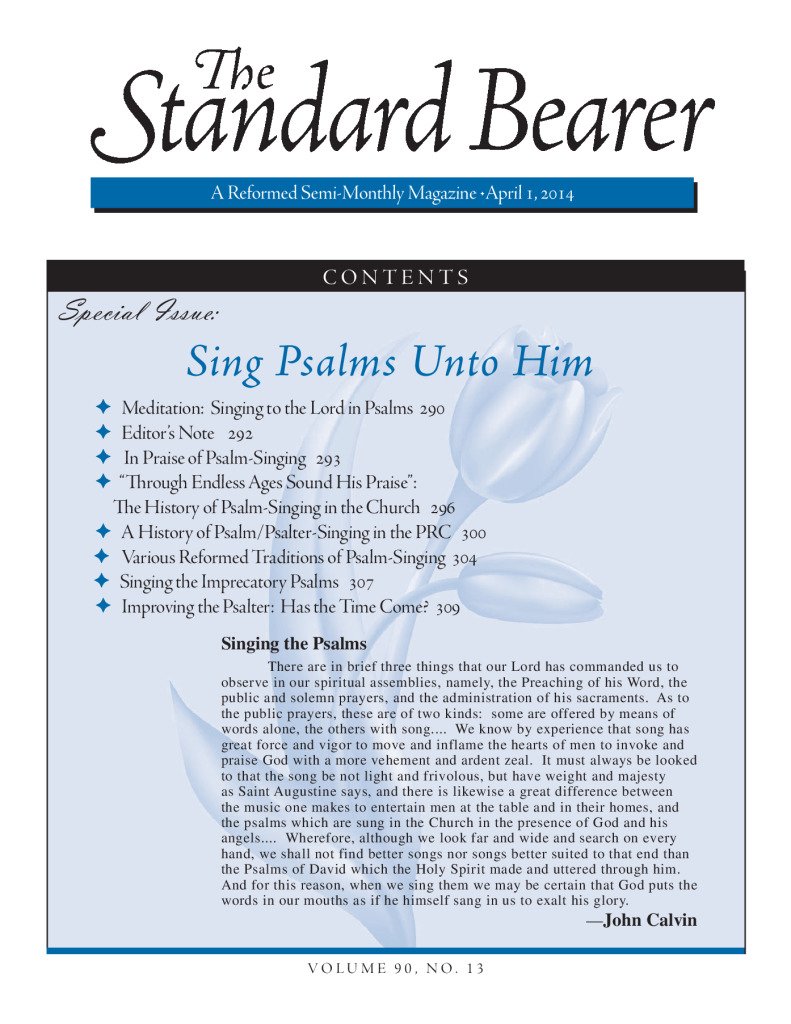