Signs in Society (2) The Feminist Movement

Signs in Society (2) The Feminist Movement

In the last article on signs of the times we began a consideration of various signs in the realm of our society. It was pointed out that these signs, while not perhaps as noticeable or spectacular as those in the realm of nature, are nonetheless very significant for us. And just because they are often overlooked, the importance of seeing and understanding them needs emphasis.

On the basis of Scripture, particularly Revelation 13, the point was stressed that the antichristian kingdom will be of such a nature that it will encompass and control all of life throughout the world. In order to bring about this unity, whether political, religious, philosophical, military, scientific, or any other kind, a certain measure of social unity is necessary. That is, the .peoples of the world must be united both internally and as nations to a degree that will make possible a voluntary union under the universal reign of the antichristian forces. This means that the sharp diversities, clashes, differences, and variations that exist among people must be reduced or eliminated altogether in order for unity to be accomplished. Somehow a measure of cooperation must be worked among those of different races, cultures, backgrounds, religions, economic classes, and life-styles. This will be no easy task, and will require time; but that it will come about is undeniable on the basis of Scripture. (The result, of course, will be that no place will be found for the church on the earth, and the great persecution will come about.) But the question that confronts us as those who live in the end times is this: Can we see now any evidences of this “leveling” effect in our society, so that we can perceive the rise and development of the power of antichrist? If so, what are they? This question we answered in the affirmative last time. Now we turn our attention to the concrete signs in society.

One evidence of the trend toward social unity and equality is the feminist movement, sometimes also termed the women’s liberation movement. This movement or social trend is very broad and diverse, including many shades and types of philosophies within its confines, from the very radical to the relatively conservative. It has both its secular and religious sides, and has intruded into American politics, as is evident from the current debate concerning whether the deadline for approval of the Equal Rights Amendment to the Constitution may be rightfully extended. Indeed, this movement touches most facets of American life today.

Now it is impossible to examine here the pros and cons of this movement, or even to describe it in any kind of detail. Not only has this for the most part been done already, with varying degrees of capability and Scriptural accuracy, but also the subject is far too general for our consideration in Signs of the Times. We need not enter the debate with the likes of Letha Scanzoni, Virginia Mollenkott, and Nancy Hardesty, all “evangelical” proponents of this movement, nor identify ourselves with Larry Christianson and Marabel Morgan in their opposition to it. Rather, it is my purpose to chronicle briefly some of the development of the feminist movement, and try to draw a few conclusions from it.

The definition and origin of this trend are as difficult to identify as the movement itself. In general, the women’s liberation movement refers to the rejection of the traditional roles and place of women in all of society, and the assumption of new, supposedly freedom-bestowing roles. But, contrary to popular belief, it is not of recent origin. In fact, its roots can be traced all the way back to the abolitionist movement before the Civil War; it continued throughout the last century, surfaced again in the early 20th century in the woman suffrage movement, and now in our time has appeared again, both broader in its scope and more radical in its goals. The feminist movement itself is not something new, then; but what is different is the fact that as manifested today its proponents want nothing less than a total revision of the existing social order. The traditional role, economic place, and status of women must be altered to give them equality with men.

But what are the causes or forces that have made this movement possible and have given it its impetus in recent years? From a Scriptural perspective, of course, this matter must be viewed in the context of the development of antichrist. In the deepest sense of the word’ the devil is behind this movement, controlling and influencing those who participate in it, and attempting to use the whole feminist movement as part of his effort to achieve the “leveling” effect necessary for the attainment of social unity and coherence. If the most basic difference among humans, i.e., the sexual difference of male and female can be practically eliminated in most or all of life, then indeed a great stride toward social unity has been taken. This means, then, that the feminist movement is part of the development of sin in the world, and an important part. We must remember that, as sin develops organically in the history of the human race, the measure of iniquity of society on all levels and in all ways must be filled, before the world is ripe for the manifestation of antichrist and the judgment of God in Christ.

But such a development does not take place in a vacuum, in the abstract; it has concrete causes and manifestations, means which the devil (under the sovereign control of God) uses to bring about this development of sin. Some of these may be enumerated and briefly described here. For example, women are joining the work force at ever-increasing rates. In 1940, only 8.6% of all mothers worked outside the home. In 1970, the figure was 38.2% and climbing. It is true that for some of these women such work has been and is a financial necessity, but that is becoming less and less true. It is also true that many have opposed this trend, insisting that the woman’s place is in the home; but the trend continues. Reinforcing this trend has been the radical change that has taken place in the role of wife and mother in the home. Families are smaller today than in former years, freeing the mother for other activities. Further, children are born when their mothers are younger than was previously the case; the mean age of the American mother at the birth of her last child is now about 26 years. In addition, the life span has increased considerably, so that by the time that the youngest child enters school, most women have 30 or 40 productive years ahead of them. They often turn to employment outside the home. Still more, because of the advent of effective contraception methods and because children are an economic liability today instead of an asset (they are no longer a necessary labor source), many women are electing not to have children, or at least, to have fewer.

Another closely related factor is the development of technology to the point where the duties of women are greatly eased. Even as recently as 60 years ago, days which some can still remember, the life of a woman was one of back-breaking manual labor and ceaseless, dawn-to-dusk toil in a battle to satisfy only the basic needs of life. One needs only to enter a modern home to see that proportionately very little time need be spent on meeting survival needs with all the modern inventions and gadgets that are available. Small wonder then that women today have ample time and opportunity to turn their attentions and energies elsewhere.

Another factor that contributes to today’s liberation emphasis is the increase of education among women. Many women today are highly trained in professional and technical skills. But because males have opposed their equality in many work-related fields, their economic achievements and status have remained inferior. This has led to a rebellion on the part of women against what they consider to be unfair treatment. This, in fact, was one of the major factors behind the Equal Rights Amendment, intended to eliminate such discrimination.

But what do we say about all of this? Perhaps we make jokes about “Rosie the Riveter,” about women wearing the pants, etc., at the same time being more than half serious. Or we can attempt to find all sorts of social factors which influence today’s developments; and this we must do, too, although never limiting ourselves merely to such a perspective. But from a Scriptural viewpoint, what do we say? First, the movement will undoubtedly continue. It may assume different forms, may recede and reappear, but it will continue. It must, until the necessary degree of social unity is brought about. Second, we as the people of God must not only see and be aware of current trends and tides and movements, but must take our stand and be prepared to suffer the consequences. The church is not immune to the influence of such things as the feminist movement. Abundant proof can be produced of the upheaval concerning the place of women in the church and the radical departures from the Scriptural norms on the part of many. And the cause, more than anything else, is that the church, in an effort to be contemporary, has imitated the world in this. We as the people of God are called not to lose the antithesis between church and world, but to remain faithful to the demands of the Scriptures. Surely this will result in isolation and persecution against the true church, according to the prophecies of Scripture. But our calling is to take an informed and faithful stand nevertheless and never to compromise, as the spirit of the age would dictate.

And finally, we must remember the purpose of all of this. God is in control, though that may not always be equally apparent to us. He controls both the nature and the pace of the development of signs in society, as well as the end of them, which is the coming of Christ for salvation and judgment. And as we can see the time of the end drawing nearer (and even the increasing pace of social development is a sign of the end), we must more and more look beyond this social order and this world to the city of foundations, remembering that we are citizens of the heavenly order and kingdom. And that kingdom we shall inherit in the way of faithfulness to the command to keep ourselves unspotted from the world. 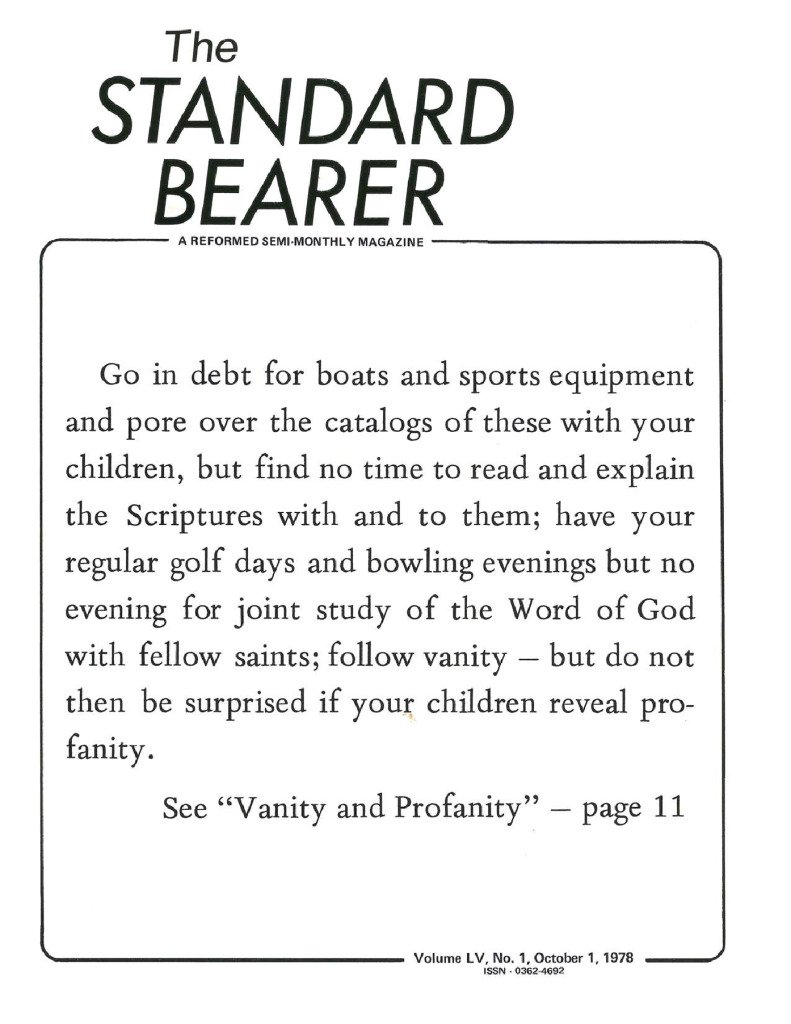