“Should We Use Unleavened Bread in the Lord’s Supper?”

“Should We Use Unleavened Bread in the Lord’s Supper?”

Last summer while vacationing in Minnesota for a couple of days I happened to meet a Lutheran minister. After becoming acquainted somewhat, we fell to discussing matters of religion and theology, especially the differences between the Reformed and Lutheran branches of the Reformation. As could be expected, the subject of the meaning of the Lord’s Supper came up, and along with that the question of the symbolism involved. My acquaintance volunteered the information that in some Lutheran churches grape juice is used rather than, wine in the observance of the sacrament. When I challenged this practice, he readily conceded its error, but immediately countered with a question of his own: did we use unleavened bread in our observance of the sacrament? I immediately saw the implications of his query and realized that my answer would make me vulnerable to criticism, but had to answer truthfully that we did not. He, of course, pointed out the inconsistency, which I was forced to admit.

This conversation made me stop and think about the subject, and then investigate it further. My investigation proved fruitless as far as our churches were concerned; to the best of my knowledge our Protestant Reformed writings have not touched the matter; a search of my memory revealed that the subject never came up in the course of my seminary training; and even a colleague was nonplussed when I put the question to him. All of this served to increase my curiosity about the subject, so I began to study and delve into it, coming up with the facts and conclusions presented in this article. There are several questions which must be answered about this matter in order to arrive at a proper understanding and solution to the problem.

First, what is the significance of unleavened bread in Scripture, particularly in connection with the Old Testament feast of the Passover, which is closely connected with the Lord’s Supper?

The meaning or significance of unleavened bread is two-fold; In the first place, from a primarily historical perspective, it symbolized the bread of affliction eaten by the children of Israel when they departed from the bondage of Egypt, and which they had to eat annually in the Passover feast in commemoration of their deliverance. Evidently this unleavened bread was of a somewhat bitter taste, and not the most pleasant or appealing of foods. In this respect it was intended to remind Israel of the bitterness of their bondage and affliction under the Egyptians, so much so that in Deut. 16:3 this bread is called the “bread of affliction.” Also, it was intended to remind Israel of the speedy nature of their delivery from bondage, an exodus so swift that they did not even have time to prepare leavened bread. Such is the direct teaching of Deut. 16:3: “Seven days shalt thou eat unleavened bread therewith, even the bread of affliction; for thou camest forth out of the land of Egypt in haste: that thou mayest remember the day when thou camest forth out of the land of Egypt all the days of thy life.” In the second place, and most importantly, unleavened bread is in Scripture the symbol of spiritual purity. Leaven was the symbol of corruption and impurity, and by implication the absence of leaven implied freedom from impurity. Just as in the physical sense of the word the yeast placed in bread dough spreads throughout the lump, and in a way introduces impurity into it (though that impurity may be desired), so also in the symbolic sense: leaven represents the pervasive and powerful influence of corruption. Because of this Israel was expressly forbidden not only to use, but even to possess or come into contact with leaven during the entire seven days of the Passover feast, on penalty of being cut off from the congregation, cf. Ex. 12:18-20. That the presence of leaven meant corruption can be seen further from Ex. 23:18 as corroborated by Ex. 34:25: “Thou shalt not offer the blood of my sacrifice with leavened bread.” Clearly the implication is that leavened bread would corrupt the sacrifice. This idea is also directly supported by Christ Himself, for He warns His disciples in Matt. 16:6, “Take heed and beware of the leaven of the Pharisees and of the Sadducees.” As verse 12 of the same chapter indicates, He referred to their corrupting doctrine and influence. Thus we can agree with Fairbairn, who states: “There can be no doubt that it mainly pointed . . . to holiness in heart and conduct, which became the ransomed people of the Lord—the uncorrupt sincerity and truth that should appear in all their behavior.”¹

Secondly, did Christ use unleavened bread in the institution of the Lord’s Supper as the fulfillment of the Passover? We may answer that without doubt He did. As a Jew who observed the law of God perfectly, He certainly obeyed the command respecting the use of unleavened bread during the entire Passover. There simply could not have been any leavened bread at the last Passover in the upper room. And since the Lord’s Supper was instituted at the same time as and in direct connection with that last Passover, it necessarily follows that unleavened bread was also used in the institution of the sacrament of communion.

In the light of these Scriptural facts, what is to be our position and practice? Should we as Protestant Reformed Churches use unleavened bread in our observance of the sacrament of the Lord’s Supper? I believe that we should, for three main reasons.

The first reason is that we should stay as close to Scripture as possible. This is always a good principle to follow in all matters of doctrine and practice; the more Scriptural we can be, the more sound we are. And this applies also to our practice regarding the Lord’s Supper. If the symbolism of the Supper includes the use of unleavened bread, particularly as instituted by Christ, then this should be our practice also. We must not become “symbolistic,” i.e., put too much significance in the outward signs. Neither, however, may we ignore or subordinate a proper and significant Scriptural symbolism when it is there. To put this matter into perspective: we would not think of using milk or even grape juice in place of the wine in the sacrament. Why don’t we be Scripturally consistent and use unleavened bread as well?

The second reason concerns the necessity of preserving the unity between the sign and the thing signified. The bread and wine are obviously the major elements in the sacramental symbolism. With the significance of the wine we are probably familiar. Wine in Scripture is the symbol of joy: Psalm 104:15 says that God gives wine “to make the heart of man glad”; Ecclesiastes 10:19 tells us, “A feast is made for laughter, and wine maketh merry.” Bread, on the other hand, (in this case unleavened bread) is the symbol both of bitterness and affliction and of purity and uprightness. Now why did God choose bread and wine to be the symbols of the sacrament? Surely there must be a reason. Christ through the sacrament means to teach and apply to believers certain spiritual truths. What does He teach and apply in the eating of unleavened bread? He teaches the bitter knowledge of sin and corruption. Through proper self-examination the believer knows his sins and the curse due to him for them; and that knowledge is not pleasant, but bitter and distasteful. And when he comes to the table of the Lord, he eats the bread of affliction, the bread of the bitter knowledge and consciousness of his sins: But at the same time he eats the bread of purity and freedom from guilt and corruption, for he has confessed those bitter sins and knows that for the sake of Christ’s death and resurrection they are forgiven. Then, and only then, does he drink the cup of joy, the joy of the forgiveness of his sins. Thus the bread is always first and the wine follows, both in the sacrament and in the experience of the Christian. In the way of the bitter acknowledgement and confession of his sins, and in the way of spiritual purity for Christ’s sake, the believer is assured joyously that his sins are forgiven. In this light the eating of unleavened bread takes on a full and beautiful meaning of the child of God.

Thirdly, this meaning becomes even fuller and richer when we realize that the sacrament is a reflection to us of Christ. The elements of the sacrament in the final analysis point not to our experience, but to Christ. The wine is the symbol of His blood, not only as to its color and its being poured out, but also as to its significance of the joy of forgiveness to be found in the blood of Christ alone. And the unleavened bread points to Christ’s body, not only as to its being broken or as to its being the staff of life both physically and spiritually, but also as to its significance. It points us to the bitter affliction that Christ suffered for us, even to the extent that He allowed His blessed body to be nailed to the cross in our stead. And it also points us to the great truth of Christ’s purity: He was the sinless one in His whole being, also as to His body, for He was God in the flesh. He who knew no sin became sin for us, even in the way of partaking of the bitter bread of affliction unto death.

The use of unleavened bread: Scripturally correct, a practice instituted by Christ and fulfilled in His own death, and the experience of the Christian in partaking of the Lord’s Supper. Should we adopt this practice? By all means, at the same time remembering that this is a matter of practice, not of doctrine, though it is connected with and based on doctrine, as all practice must be. Obviously this is not a matter of earth-shaking doctrinal importance, nor is it a matter of spiritual life or death for the Christian. But it is a matter of practical Scriptural consistency. Thus it is not mandatory, but desirable; not necessary, but advisable, to adopt this practice. Let us as churches adopt this practice as a continuing part of our contribution to the development, practice, and preservation of the Reformed faith of Scripture. 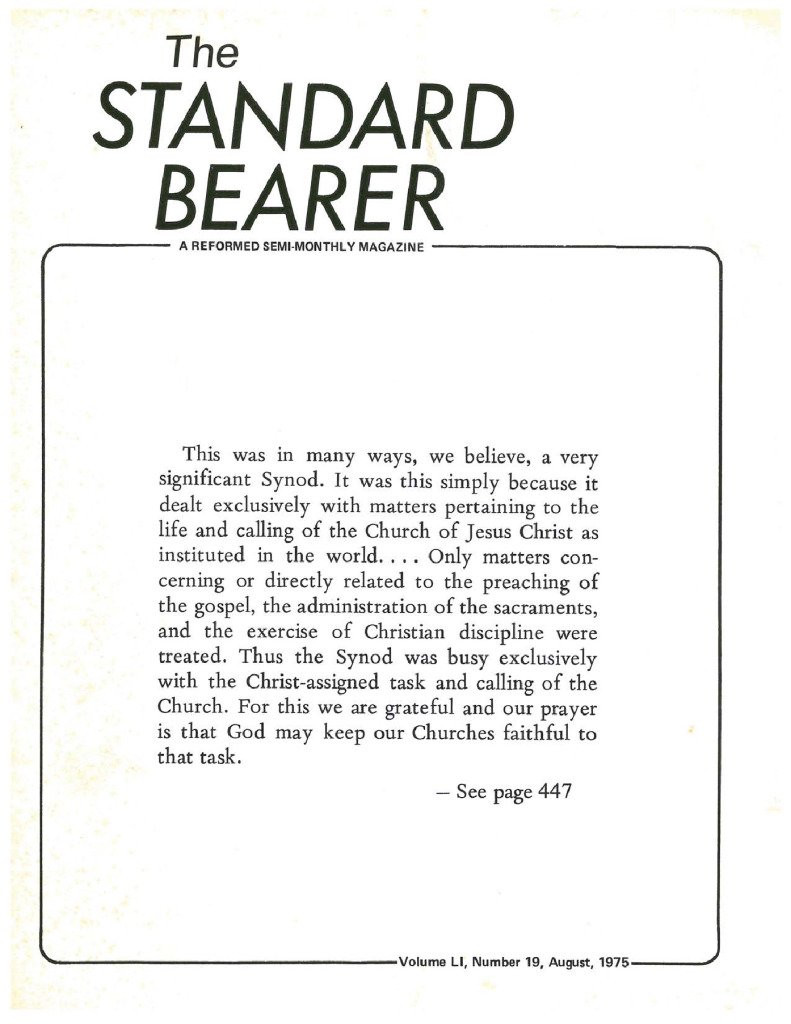