Should Our Adolescents Be Encouraged To Partake Of The Lord’s Supper?

Should Our Adolescents Be Encouraged To Partake Of The Lord’s Supper?

This was the subject of discussion at the fall meeting of our League of Men’s Societies. And it was suggested that my introductory treatment of the subject should appear in writing for the benefit of all and to stimulate further discussion. Seeing that I have just finished the treatment of our Canons and have not yet begun my treatment of the Netherland Confession under my usual rubric, discussion of the above subject can conveniently be inserted at this point.

It goes without saying that this subject is of important practical significance, and is, in fact, close to our hearts. For, first of all, it concerns our covenant youth, who ought to be very much the concern of every parent and every elder and pastor. And, secondly, it concerns the celebration of the sacrament of communion, a matter which is at once of significance and of interest to every, believer. Hence, we need spend but few words on the interest and the seriousness of the subject.

A brief definition of terms is essential, first of all, for an intelligent treatment of the subject. We are all aware what is meant by the Lord’s Supper. But let us stress a few important elements. The Lord’s Supper is the second of the sacraments, one of the means of grace that are appointed for the strengthening of our faith. It is the sacrament of covenant communion and fellowship, even as baptism is the sacrament of incorporation in the covenant of grace. In distinction from baptism—as becomes especially plain in infant baptism—it is characterized as a sacrament by conscious and active participation in the part of believers. In baptism we are passive: we are baptized. In communion we are active: we partake, we eat and drink the body and blood of Christ. Moreover, it is to Se remembered that the means of grace are essentially one. The Lord’s Supper belongs with and follows upon baptism, essentially cannot be and therefore by us may not be separated from baptism. And the two sacraments, in turn, belong with the preaching of the Word as the primary means of grace.

The next term requiring definition is adolescents. The age of adolescence is the age of youth. Taken broadly, it covers the years from 12 to 20, although we must always remember that you cannot mechanically break life up into exact periods. One could say much of the characteristics of this period. These are in many ways one’s formative years. They are also the years in which the individual begins to assert his independence, whether for good or for evil. I think we must remember especially in connection with our subject that adolescence is the age of transition. It is the age in which one is partly a child, yet not completely a child any more; it is also the age in which one is to an extent grownup, yet not completely an adult. However, in our subject the term must be more narrowly defined. Obviously the subject is concerned with the period ofearly adolescence. And by this term we understand the period from approximately 12 years of age to approximately 15 years of age. That this is the meaning of our subject is plain from the fact that otherwise our subject proposes nothing extraordinary. After all, most of our covenant youth make confession of faith and partake of the Lord’s Supper in late adolescence. Besides, it is exactly this question that has been discussed occasionally in our circles and that has recently been raised again by some in connection with a recent discussion of the discipline of members by baptism. Hence, we shall have especially our early, or younger, adolescents in mind when we try to arrive at some conclusions in regard to our subject.

Finally, there is the term encourage—a very broad term indeed. It could mean ecclesiastical encouragement; it could include merely parental encouragement. It could include merely the exercise of spiritual influences—preaching, catechism, personal admonition and pastoral labor. It could also include encouragement by ecclesiastical decision, adoption of a general rule or policy which either merely allows or that definitely prescribes and stipulates participation in the Lord’s Supper by such covenant youth of 12 to 15 years old.

I. Should covenant youth of 12 to 15 years old be encouraged to partake of the Lord’s Supper before they make confession of faith?

By way of introduction, let me state: first of all, that I can nowhere find that this idea was ever considered by Reformed churches; nor can I find that any concrete plan or thoroughly developed proposal of this kind was ever advanced by any Reformed authority. A suggestion along these lines is made by the Rev. H. Hoeksema in his treatment of Lord’s Day XXVIII in “Eating and Drinking Christ,” pp. 14, 15: “The church consists of believers and their children. Other members there are not in the church in the world. In the church, therefore, one is either a professing believer or a child that has not yet come to years of discretion. But one who remains a baptized member and never confesses his faith in the Lord Jesus Christ is a monstrosity that certainly should be eliminated by proper disciplinary measures. In the Church of the Refugees in London it was customary to demand of its members to make confession of faith and come to the Lord’s table when they reached the age of 18 or 20 years. After this age they were no longer considered as members of the church of Christ in the world. Now it may be true that this rule was too stringent. Various factors may have to be taken into consideration that make it impossible always to apply a rule of this nature. Nevertheless, it must be confessed that this practice was based upon a principally sound conception of the church as the gathering of believers and their children.

“For the same reason I often wonder whether the practice of our churches not to administer the Lord’s Supper to children before they have reached the age of adolescence is not an error. Surely, long before they reach this age, they are able to discern the Lord’s body. There is, it seems to me, not sufficient reason to withhold from them this sacrament, by which they are nourished with the body and blood of Christ and in which they commemorate Christ’s death, until they have finished the course in catechetical instruction that is required in our churches and are capable of making a complete confession of faith. Let it rather be demanded of them that they continue to attend catechism until they have finished the course, but in the meantime, let them partake of the Lord’s Supper at least at a much earlier age than is usually the custom in our churches.”

More than a rather indefinite suggestion, however, the above cannot be called. Apart from this, I have heard oral suggestions of this idea, and, incidentally, also heard it claimed that this was the theory and practice of John Calvin—a matter to which we will return presently.

Hence, we can but outline a hypothetical plan, which might contain the following elements. 1)All children of believers, when they reached the age of 12 years, would have the communion table opened to them, either by permission or by definite, binding rule, and that, too, prior to confession of faith. It would thus become common practice in our churches that covenant children would partake of communion when they reached the age of 12. 2) Such children would be required to continue their catechetical training, and confession of faith would be expected of them when they reached the age of 15 or 16 years. 3) If in the interim between the age of 12 and the age of 15 or 16 such children would reveal an attitude of indifference or opposition toward their catechetical instruction or toward the means of grace in general, or if they walked in an ungodly manner, they would be barred from the Lord’s table. 4) If such adolescents made no confession of faith by the age of 16, they would begin to be the objects of discipline, with a view to eventual excommunication in case of impenitence by, say, the age of 21. Others might propose variations of this plan, some with less stringent requirements. But here we have at least the main lines of such a plan. And besides, it might be expected—if, at least, this early participation in the Lord’s Supper is beneficial and produces fruit as a means of grace—that the requirements should be rather stringent. If 12 is the age when one partakes of the Lord’s Supper, and 15 is the age for confession of faith, then 21 (the age of adulthood is certainly becoming a relatively late ages for not having made confession of faith.

However this may be, let us now consider some possible arguments in favor of such a plan, I will present them very sketchily.

1) Such a plan would be in harmony with the fact that baptism and the Lord’s Supper belong together and are essentially one and inseparable as sacraments, and that therefore those who are baptized have a right to the Lord’s Supper and ought to partake of it as soon as they are able.

2) A covenant child in the period of early adolescence is quite able to discern the Lord’s body, is thus able to partake, and therefore ought to partake of the Lord’s Supper.

3) In this way the Lord’s Supper may actually serve as a means of grace, along with the preaching of the Word and with baptism, not only for adult members of God’s covenant but also for our children, at least when they reach the age of 12. Thus our covenant youth would reap the advantage of having their faith strengthened through the means of this sacrament, and so instead of being a goal attained throughconfession of faith the sacrament of communion would be a powerful means to lead covenant youth toconfession of faith.

4) Early participation in the Lord’s Supper would serve the purpose of making covenant youth more conscious of their actual place in the church, would thus bind them more closely td the church, cause them to “live along,” with the church, and would thus also serve as a means of restraint as far as a worldly and ungodly life is concerned.

5) This plan is in harmony with the usual manner of conversion in the sphere of, the covenant. While public confession of faith is necessary, it his too often equated with a so-called “conversion experience,” whereas actually conversion is a gradual process for covenant youth. It is therefore much more realistic to take our children along with us to the Lord’s table as the expected and natural thing in their religious life.

6) This plan is in harmony with the position that baptized adolescents do not “join church” or become members of the church through confession of faith, but are already members of the church from their infancy, and are therefore also subject to discipline and some form of excommunication in case of indifference and impenitence.

What do you think of the above? Can you perhaps adduce more arguments?

My own answer to Question I is a very strenuous and decisive No. And my reasons I will give next time, D.V. 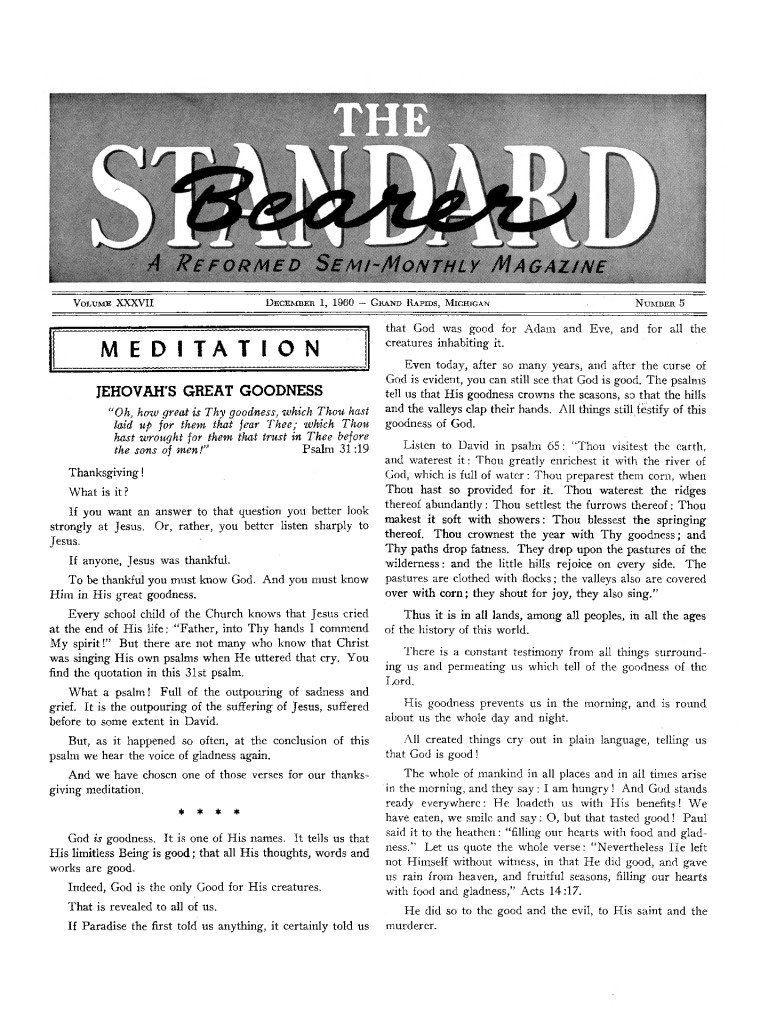