Sheep in the Midst of Wolves

Sheep in the Midst of Wolves

Then it comes to the training of their children, some Christian parents put themselves above the Lord Jesus.

Christ has certainly declared that between His followers and the world there is a difference as of sheep and wolves; but they seem to know better, and think that their children and the children of the world are all of one sort.

So they see not the least danger ahead when their baptized and Christ-consecrated children associate and are on intimate footing with children of their years, from families where Christ is not known. And when the choice stands between children of a somewhat lower social rank from Christian homes, and children of their own more highly social rank but who stand outside of the faith, all too frequently they give the preference to that more highly social association for their children.

Worse yet, when a school must be selected for their children, be it a lower or a higher grade school, even then many parents are wiser than the Lord Jesus, and do not believe that here too there is mention of sheep and wolves.

In general, they are in favor of Christian education. Of course by itself this is better. And, everything else being equal, they would give their preference to a Christian school.

But when everything else is not equal, and as a Christian school either requires more expense, or does not offer like privileges, or is not of one’s own social rank, it is dismissed from further thought, and the child is sent among wolves, as Jesus would say—but as, to improve upon Jesus, they say: amongsociety people.

But, you will say, Jesus did the same. He did not keep His disciples apart. For He Himself declared it, in the very word to which appeal is made: “Behold, I send you forth as sheep in the midst of wolves” (Matt. 10:16).

And this is so, only with this difference, that Jesus sent them among wolves when they were ready.

Nowhere in Holy Scripture do you read that when He chose Peter and Andrew, John and James, and others as His disciples, the Lord Jesus first sent them to the schools of the Scribes or to the then University in Jerusalem.

These men had first been at school with John the Baptist. Truly no “respectable” school. In the wilderness, with a man clothed with camel’s hair, and all sorts of sinners and publicans as pupils. A strikinglypeculiar school.

And then Jesus had formed a school for Himself, and in two classes, if you will, had taught the twelve and the seventy each by themselves.

And so greatly concerned is He lest His disciples should come under wrong influences that, when He meets the masters of other schools, He almost always carries on the conversation Himself and shields His disciples.

So the Lord Jesus, who evidently thought altogether differently about it from such parents, has trained His disciples quite apart from and outside of the influence of the official schools.

And only then, when this had been done, when their education was sufficiently finished and they were prepared, only then did Jesus appoint them, to begin their official ministry, and sent them out into the world, saying: “Behold, I send you forth as sheep in the midst of wolves.”

And of course this then is necessary.

When our children are matured and ripened, they must go out into the world; then there is no more room for delay. Jesus Himself prayed in John 17: “I pray thee, Father, not that thou shouldest take them out of the world, but that in the world thou shouldest keep them from the evil.”

To fight for Christ against the world is the calling in life also for our children. Thereby alone shall they once obtain the crown. And of course you cannot fight the world while you keep yourself apart. For this you must go out into the world. And as a sheep of the fold risk yourself among wolves.

But such parents do not mean it in this way at all. They do not say: “My son is mature at an early age and burns with such zeal for Christ, that he is ready now to go out among wolves to fight for his Savior.”

No, nothing of this.

If such zeal for the Lord Jesus had been fostered by them in their sons, they would be the first to send their children to a school where the Christ is held in honor.

But they have not fostered this zeal from infancy. This zeal is not kindled in their child. For this reason their children find the wolves so nice and pleasant, and they say: “Father, let us rather go out among the wolves. Such strong, noble animals. With those sheep, things are so tame.”

And then such parents answer: “Well, my boy, I do not want to compel you. If it can make your life more pleasant, go out among the wolves. But let them not bite you. Look out.”

Such is the condition.

A condition which is possible only when one accords his own insight a higher place than Jesus’ utterance, and does not really believe what Jesus says. When in general one believes in Jesus, but does not give himself captive to His word.

And after having so weakened oneself by all sorts of shallow, superficial representations, one proceeds to reason further about as follows: “My child has always been present when the Bible was read. I have always set him a good example. Really inimical he is not. And, moreover, so long as he is not converted, it makes no difference whether I send him to a Christian school or not; if he truly is a child of God, his Savior will protect him even among wolves.”

Oh, our heart is deceitful above all things, and desperately wicked: who can know it? (Jer. 17:9).

And this is called loving one’s child. Such are parents that have made the Baptism vows. And every evening you may find such parents on their knees, praying that God will keep their child.

But of what it is to tempt God, such worshipers seem to have no faint idea.

One thing, however, may be asked of them, and that is, whether, after such a loveless weakness with respect to their children, they think that they can find ground for such praying in any internal address of the Holy Ghost?

Consider indeed, what is implied in that sharp antithesis which Jesus makes between sheep and wolves.

Does Jesus mean to say thereby that His followers, without exception, are all so gentle and so dear; and that on the other hand the people of the world are as malicious as a wild animal?

Not in the least. With such self-complacency and with such self-conceited looking-down upon the people of the world, Jesus’ saying has nothing to do.

You have seen in the meadow how violently sometimes a sheep can butt and be anything but lovable.

But this is the point: A wolf is strong in defense of his own domain, and this makes the people of the world so much stronger in the world than you, so that you are no match for them, so that your child standsdefenseless over against them, and certainly is lostwhen he comes among them.

This first. And in the second place, the people of the world are fanatical in their zeal for the world, and are bent upon inspiring your child, who now still resists, with the spirit of the world. They cannot rest until your child is become part of the world. For this reason Jesus calls them wolves. They want to make your child like unto themselves, identify him with themselves, and thus spiritually devour him.

And in the face of them we and our children stand as defenseless sheep, but as lambs of the flock of our Lord.

Not as a hart or an ox, which a wolf attacks also, but very definitely as “sheep.”

Simply because a hart defends himself till he drops, but a sheep, when the wolf comes, flees to his shepherd.

And so the lesson is this.

First keep your children with Jesus, and under the shadow of His wings educate them until they are ready.

And when they are ready, send them out into the world, let them out among wolves, but as sheep, i.e., as young people whose shield is the Lord. 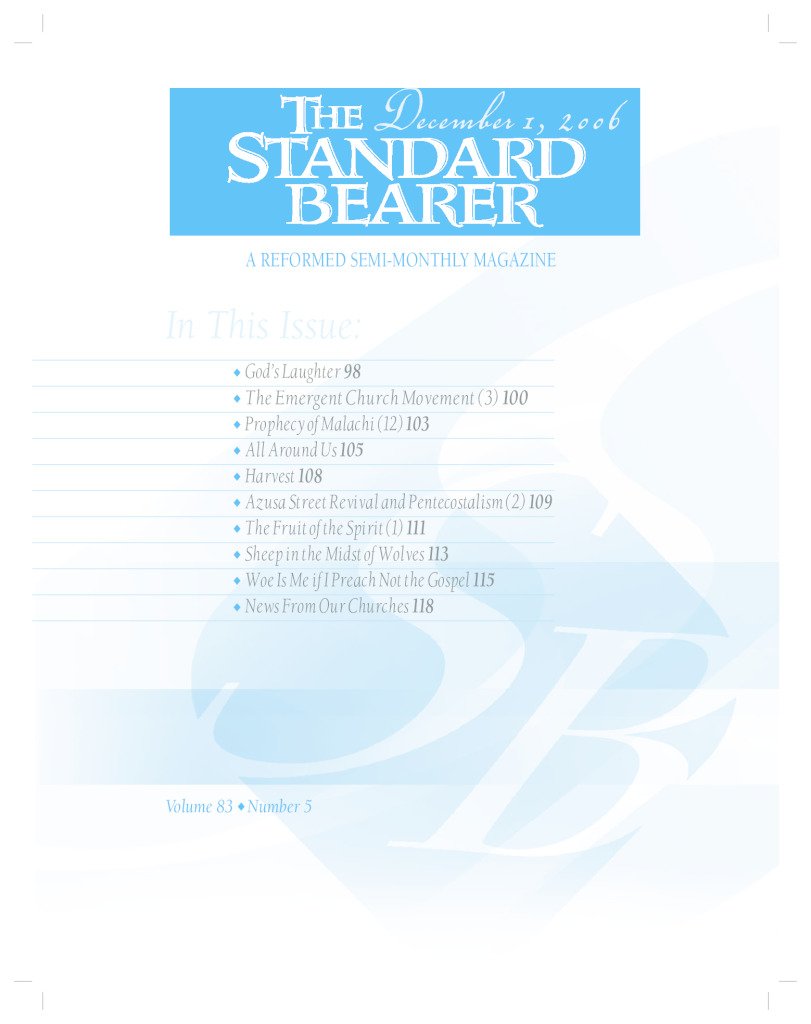