Separated Unto the Gospel of God (1)

Separated Unto the Gospel of God (1)

Beloved graduates, esteemed colleagues, members of the Theological School Committee, delegates of synod, brothers and sisters in Christ: The epistle to the Romans is a monument in the New Testament Scriptures.

The epistle to the Romans has always held this important place in the estimation of the church. I need only remind you of the importance a right understanding of this epistle had at the time of the Reformation. One commentator has written:

The Reformation was undoubtedly the work of the Epistle to the Romans…and the probability is that every great spiritual revival in the church will be connected as effect and cause with a deeper understanding of this book (Frederick L. Godet, “Introduction,” Commentary on the Romans, vol. 1, p. 1).

The epistle to the Romans is the true masterpiece of the New Testament and the very purest gospel, which is well worth and deserving that a Christian man should not only learn it by heart, word for word, but also that he should daily deal with it as the daily bread of men’s souls. It can never be too much or too well read or studied, and the more it is handled the more precious it becomes, and the better it tastes.

When anyone understands this Epistle, he has a passage opened to him to the understanding of the whole Scripture.

This epistle was written by Paul to the church that was at Rome.

Rome was the capital city of the entire empire, the city of the Caesars. In this large, pagan city there was a true church of Jesus Christ. At the very heart of heathen culture and life, God had planted His church.

Fundamentally, of course, that is always the position of the church; always the church is called to exist in the Rome of this world.

The apostle’s purpose in writing the epistle was to set before the believers at Rome the fundamental doctrines of salvation. He intended to give them an overview of Christian doctrine. He wrote a summary of all the important truths of the faith. His purpose was to set forth “the gospel of God.”

The Gospel of God

We have the gospel of God in the sacred Scriptures. The apostle points this out in the verse that immediately follows his description of the gospel as “the gospel of God.” Of this gospel He says in Romans 1:2, “Which he had promised afore by his prophets in the holy scriptures.” There is the most powerful proof here for the divine inspiration of the Bible. Notice that the apostle speaks of “His” prophets, that is, God’s prophets. They were God’s prophets inasmuch as they were God’s instruments to proclaim His Word. And he says “holy” Scriptures. They are “holy” Scriptures because they partake of the holiness of God their author.

The important point that must be emphasized is that the gospel cannot and may not be separated from Holy Scripture. We have the gospel of God in the Scriptures. God does not any longer speak the gospel directly as He once did in the Garden of Eden or at various times throughout the Old Testament. But God has breathed forth the infallibly inspired Scriptures, so that those Scriptures are the announcement of the gospel to the church today. To undermine, therefore, the trustworthiness, the infallibility, and authority of the Bible at any point is to attack and to deny the gospel.

But what is the content of the gospel that Paul preached and that is set forth in Holy Scripture? Paul summarizes the gospel of God unto which He had been separated in verses 3 and 4:

Concerning his Son Jesus Christ our Lord, which was made of the seed of David according to the flesh; and declared to be the Son of God with power, according to the spirit of holiness, by the resurrection from the dead.

The content of the gospel is God’s Son, the Lord Jesus Christ. The gospel concerns who Jesus is. He is a real man, of the seed of David according to the flesh. But also and at the same time He is the Son of God. The gospel concerns what this Jesus has done: born, suffered, died, and risen from the dead. The apostle mentions in the text the central importance of two great events: Jesus’ incarnation and resurrection from the dead. These two events are the beginning and the end, the bookends, of Jesus’ saving work, His life and ministry on earth. It begins with His incarnation and birth. It climaxes in His resurrection from the dead.

That Christ is the content of the gospel comes out later in this same chapter. In verse 9 the apostle says, “For God is my witness, whom I serve with my spirit in the gospel of his Son, that without ceasing I make mention of you always in my prayers.” And again in verse 16: “For I am not ashamed of the gospel of Christ: for it is the power of God unto salvation….”

This is the gospel!

The blessed good news of the gospel!

What this comes down to is grace. The gospel of God is the gospel of grace. The apostle does not say that in so many words in this text, but that is clearly the truth that he teaches. The gospel is the gospel of grace inasmuch as it proclaims that salvation is altogether the work of God alone. From beginning to end, it is the work of God. God in eternity has determined a people and ordained their salvation. God sent Jesus Christ. As the Son of God, Christ did God’s work on behalf of God’s purpose and for God’s glory. Calvary was the accomplishment of God’s will. And God raised Jesus Christ from the dead. Salvation is God’s work entirely. Nothing of this great salvation is the work of man. Nothing. 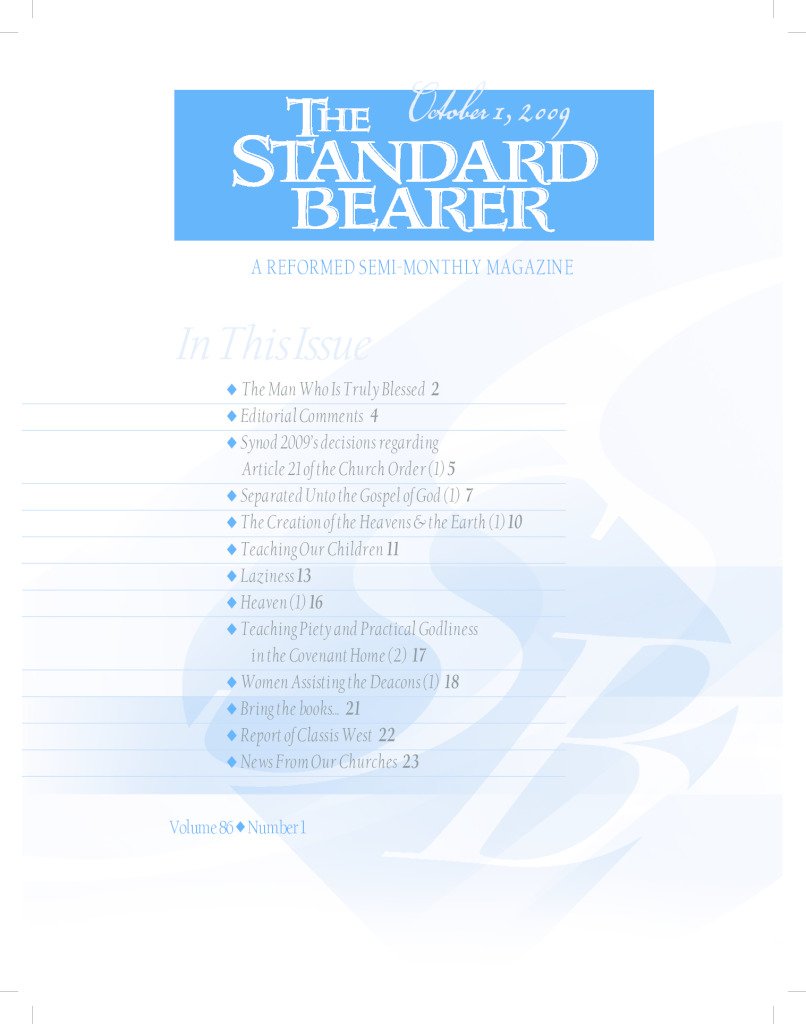