Seeking the city that continues

Seeking the city that continues

“Let us go forth therefore unto him without the camp… for here have we no continuing city, but we seek one to come.” Hebrews 13:13-14

One year comes to an end and another year begins.

The ending of the year reminds us of the end of all things and the final judgment. And we are instructed to be ready for the day of the Lord.

The beginning of the New Year also instructs us to look ahead. And it is well that we look beyond the final judgment all the way into eternity.

In eternity we have a city that continues, a city that endures and is eternal. Here, in this present world we have no continuing city. The word of God before us indicates that we seek that eternal city. Notice, that this is not an exhortation but a statement of fact concerning all true believers. Because of our imperfect faith there must also be an exhortation daily to seek this continuing city that is to come. This we must do during the New Year and until Christ comes. And that seeking must dominate our lives.

Here we have no continuing city.

There may be a reference here to the city of Jerusalem. Remember that the book of Hebrews was written to Hebrew Christians, some of whom were inclined to abandon the Christian faith in order to return to Judaism and the worship of the temple in Jerusalem. The theme of the book of Hebrews is that what these early Christians had in Jesus Christ is far superior to what could be found in Judaism with its earthly temple in Jerusalem. In keeping with that (although not mentioned in the book) Jerusalem and its temple were soon to be destroyed. Jesus Himself prophesied that the city of Jerusalem and the temple would be destroyed (Matt. 24:2). In AD 70 God destroyed the city and the temple by Roman legions. God did this in part as a judgment upon apostate Israel and in part because the earthly temple had lost its significance. It is very possible that the holy writer had the fall of Jerusalem in mind. Certainly the Jews have no continuing city.

In contrast, we have a continuing city beyond death.

The holy writer of this epistle has already described this continuing city in chapter 11 in connection with the faith of Abraham, Isaac, and Jacob.

As they lived in the earthly Canaan, these patriarchs sought a city that has foundations, whose builder and maker is God (v. 10). All the cities built by men have no sure foundation. These are the foundations of human philosophy, politics, and effort. For that reason these cities shall certainly one day perish. But the city that God builds has a sure foundation—the blood of the cross of Jesus Christ. Thus it is the continuing city that has no end.

Furthermore, this continuing city is a heavenly city. According to verse 16 as Abraham, Isaac, and Jacob sojourned in the earthly Canaan, they desired a better country, that is, a heavenly country in which God has prepared for them a city. This heavenly city is prepared not just for these three patriarchs but for all the true seed of Abraham with whom God has established His covenant (Gen. 17:7). And this true seed is known by their faith. All true believers in all ages are the true seed of Abraham from whom God has prepared this enduring, heavenly city.

This is a beautiful figure for the glories of heaven that await us and all true believers in Jesus Christ. The Bible uses different figures to describe the glory of heaven, each figure emphasizing something different. It is referred to as the tabernacle of God, as Father’s house of many mansions, as the heavenly Canaan, and as the New Jerusalem coming down from heaven.

Here the glories of heaven are referred to as a continuing city. This figure emphasizes some beautiful aspects of the glory of heaven. Even as a city is a community of people under one king or government, so also in heaven will there be the community of believers under the kingship of Jesus Christ. In this city or community all true believers will find the blessings of God in Jesus Christ as they have never experienced them before. In Jesus Christ they will enjoy perfect fellowship with God the Father through Jesus Christ. And in that fellowship they will enjoy loving fellowship among themselves as fellow citizens of the heavenly city. And of this glorious bliss there will be no end.

Here we have no continuing city, but we seek one to come.

To seek something speaks of an earnest desire for something. It also implies that one does all in his power to attain the thing that he desires.

So also we seek the continuing city that is to come.

The “we” includes all the true seed of Abraham who have the same faith as Abraham.

The fact that the true believer seeks the heavenly city of God arises out of his faith.

Faith does not seek the things here below but the things that are above. That is, faith is not interested especially in things earthly and physical—earthly riches, pleasures, position, power, and so on. Faith is interested in the things that are eternal—the continuing city that God has reserved for His people in Jesus Christ with all its spiritual riches and pleasures. Faith is interested in the earthly only in so far as it is necessary to serve the Lord God and enjoy a foretaste of the eternal riches that are to come.

And so the believer is one who seeks the continuing city that is to come.

This leads the believer to go forth to Jesus Christ outside the camp.

This language draws our attention to the great Day of Atonement in the Old Testament, when the priest sacrificed a bull (for himself) and a goat (for the people), the blood of which was brought into the Most Holy Place for a sin offering. The bodies of these animals were taken outside the camp (later the city of Jerusalem) to be burned. The fact that these offerings were repeated yearly indicated that they did not cover the sins of the people and make them holy to the Lord.

But Jesus has suffered outside the city gate to make the people holy through His blood (v. 12). He was crucified on Golgotha, a hill outside the city of Jerusalem. This was done purposefully to show that His crucifixion, by which He suffered the curse of God for the church, was the fulfillment of the Old Testament ceremony of the Day of Atonement.

This is how we will attain the continuing city that is to come. Christ’s death on the cross is the foundation of this continuing city. Only as we cling to the cross by faith and find ourselves sanctified in His blood will we one day enter into this city.

This seeking of the eternal city of God must control our lives for the new year and for every year the Lord gives us during our earthly pilgrimage.

Interestingly, what is stated as a fact in this passage for the true believer is also given as an admonition in other passages, although using different language:

If ye then be risen with Christ, seek those things which are above, where Christ sitteth on the right hand of God. Set your affection on things above, not on things on the earth (Col 3:1-2).

The necessity of these admonitions is the sad fact that the believer in weakness of faith does not always seek the things that are heavenly and eternal but the things here below. His desires are too much earthly and not enough heavenly. He becomes distracted by the things that perish, losing sight of the things that continue. This also hinders him from going outside the camp to be sanctified in the blood of the Lamb.

Let us this year and every year that remains live in the faith of our spiritual father Abraham, who looked for a city which hath foundations, whose builder and maker is God. 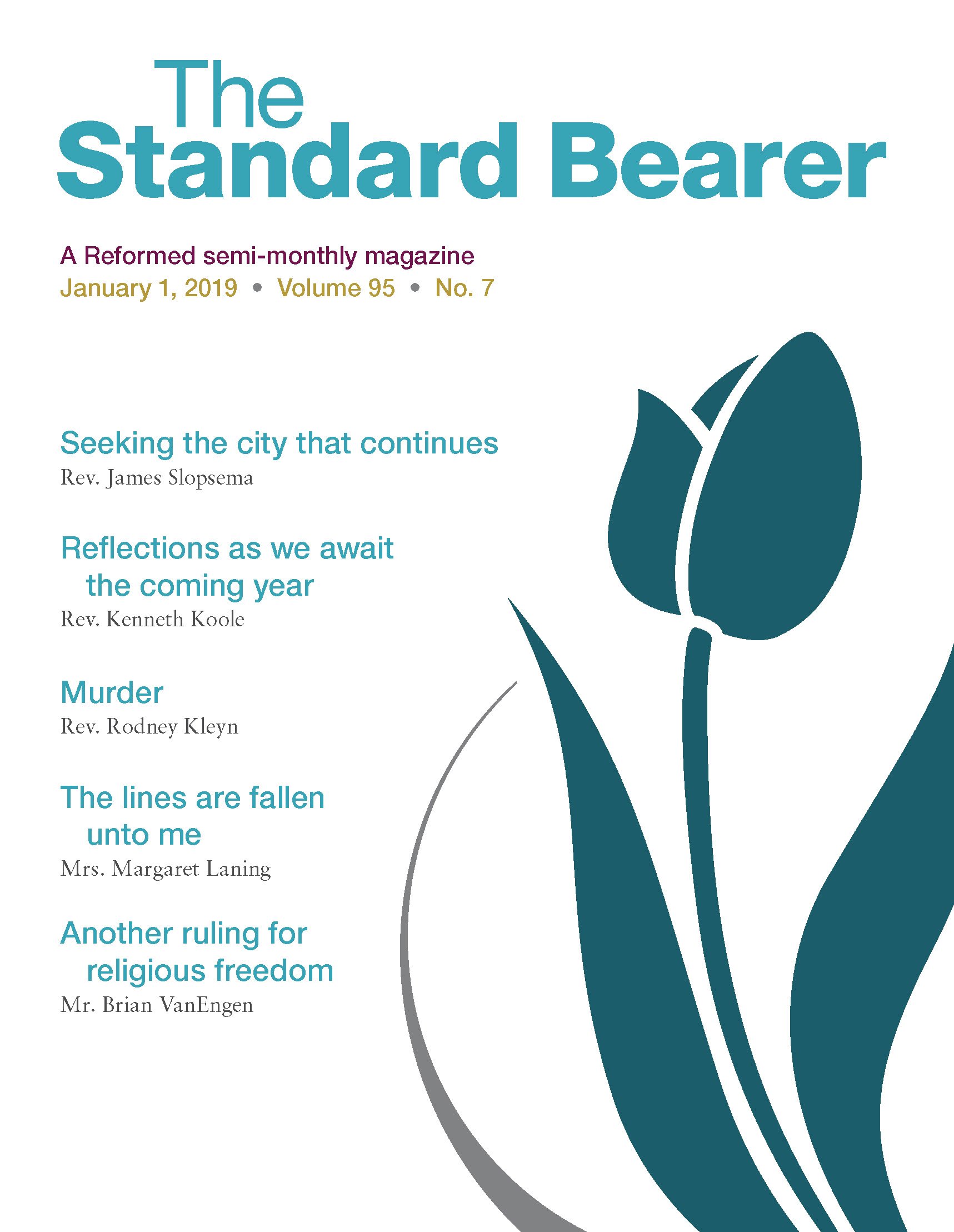