“But we see Jesus, who was made a little lower than the angels for the suffering of death, crowned with glory and honour, that he by the grace of God should taste death for every man.”

Crowned with glory and honour!

Which He attained forty days after His resurrection when the Lord Jesus ascended into the highest heavens.

During those forty days He showed Himself alive, making no less than ten appearances to His disciples; thus giving to them infallible proofs that He had not been overcome by death, and that, as the living Lord He would be with them unto the end’ of the world, applying unto them the salvation He had accomplished for them through His suffering, death, and resurrection.

Also during those days instructing them concerning the things of His kingdom, and the operations of the Comforter, the Holy Spirit, Whom He would send unto them.

And, O, how they needed that instruction! Were they not to be His witnesses unto the ends of the earth? But how could they be faithful witnesses unless they themselves understood first the things concerning His glorious work of redemption? How necessary, therefore, it was that they understood perfectly the meaning, the manner, and the necessity of His coming into the world, and of His saving work accomplished in His suffering, death, and resurrection. Moreover, also now they must understand the significance of His ascension into heaven, and unto the Father, whence He would receive and dispense unto them the Holy Spirit, Who would lead them into all the truth, and sanctify unto them the benefits He so graciously merited, for them.

And now, on the last day of the forty, He led them out unto the Mount called Olivet, from which place He would take His leave of them and return to the place whence He came.

It is concerning this glorious ascension that the text speaks.

Significantly, in the context the writer to the Hebrews had been reflecting on the creation of man, and the resultant high position man sustained in relation to the rest of creation. He was crowned with glory and honour, and placed over all the earthly creation as king under God. Musing on what the psalmist had said (Psalm 8), the author of this epistle quotes from the Psalm, and then shows how the sweet singer saw only in part the extended glories the Lord had in mind for man. “What is man, that thou art mindful of him? or the son of man, that thou visitest him? Thou madest him a little lower than the angels; thou crownedst him with glory and honour, and didst set him over the works of thy hand. Thou hast put all things in subjection under his feet. . . .”

Of this glory bestowed upon man by virtue of his creation, our Psalter picks up the refrain:

O what is man, in Thy regard

To hold so large a place,

And what is the son of man, that Thou

Dost visit him in grace.

In man Thy wisdom hath bestowed

A pow’r well nigh divine;

With honor Thou hast crowned his head

Thou hast subjected all to him,

And lord of all is he,

Of flocks and herds, and beasts and birds,

And all within the sea.

Great and glorious, indeed, was the honour God had bestowed upon the highest of all the creatures!

But in all this, so the psalmist noted, man was nevertheless created a little lower than the angels. He was earthly, while they were heavenly. Paradoxical as it may seem, therefore, though man was high, yet was he low.

However, God had in mind something much greater for man. As king of creation only that which was earthly was subjected to him. He must be exalted to still greater heights! He must have all things, also those in heaven, in subjection under his feet. The time must come when also principalities and powers, angels and devils, must be subject unto him.

This, the writer to the Hebrews says, we do not yet see!

But we see Jesus!

We see Jesus crowned! In His ascension and coronation we see the beginning of an accomplished fact. In Him we see the first principle of the high estate the Lord of heaven and earth has destined for the highest of all His creatures who must reign with Him.

And be sure that you pay special attention to the fact that it is Jesus Who is so crowned!

For He took on Him the flesh and blood of the children of men, and became like unto His brethren in all things, sin excepted. Not always was He like unto His brethren. From eternity He is in the form of God. Yea, He is God, the Wholly Other! Supremely exalted above all creatures, possessing in Himself the complete divine nature. The infinite and glorious God!

But wonder of wonders, He became man!

Paradoxical as it may seem,—God became!

The Infinite came into the finite. The Eternal came into the temporal. The Unchangeable became changeable man, a child of time; while He remained the eternal, immutable God. He took on Him the form of a servant, while He remained in the form of God. He became the Son of man on the earth, while He was simultaneously the Son of God in the bosom of the Father.

The Son of God, Who became the Son of man, also became a little lower than the angels!

Nay, rather, it is m His incarnation, His coming into the flesh, that He is made lower than the heavenly creatures. Thus He assumed the position of the first man, who was of the earth, earthy. However, in relation to that first man, there was this difference in position,—while the fast man Adam could fall, and did fall from his high estate, the last Adam, the Lord from heaven, would not fall, but through the way of perfect obedience would bring that position to its exalted heights. He would be crowned with glory and honour, not as lord over the earthly creation, but as Lord of all, even above the angels.

Shall He attain to these glorious heights, He in His human nature must ascend into heaven!

That place in God’s creation, higher than the starry firmament, where the omnipresent God is enthroned in the beauty of holiness, and where He is pleased to receive the praises of men and angels, and all His creatures. From before the very eyes of His disciples He is taken up to the right hand of God, where He is given a name which is above every name, and before Whom every knee shall bow.

In that very nature in which He was conceived and born, by which conception and birth He was made a little lower than the angels—in that very nature He is crowned with glory and honour such as the first man of the earth could not know.

It is with the glory of Him the living God, Who alone is glorious, that He is crowned. And that glory is the radiation of all divine virtues. A foretaste of that glory the Lord received when in the presence of His disciples He was bathed in glory on the Mount of Transfiguration, before the cross. Now His exalted human nature experienced the perfection of that glory at the right hand of God. Then the glory of God rested upon Him as a crown not only, but penetrated His whole nature.

When the King of glory entered the gates of righteousness He received all that authority and power God could give Him, not only as the symbol of victory, but as a reward of merit; the highest honor the creature could receive,—to rule in the Name of God over all creation in heaven and on earth. And with power and authority shall He rule until all is brought into subjection under His feet.

The ground for this coronation lay in His suffering of death. Here evidently is referred to not merely the fact that He had, been overcome by death, but more particularly the fact that He had come into the world to die. We are wont to speak of His passive and active obedience. We do not wish to quibble about this distinction. Rather we would emphasize here, in the light of the text, that the Son of God, Who became Son of man, came into the world to die. And this implies that His death was substitutional and propitiatory. He was not a victim of circumstance, who was simply overcome by death; but, as the Head of His people, He laid down His life for them.

By the grace of God!

No wonder He is crowned with glory and honour!

Not once while He was in the flesh did He think it a matter of robbery to be equal with God. But He made Himself of no reputation, became all Servant, and humbled Himself even unto death, in order to pay the penalty of our guilt, and to merit for us righteousness and life. Not once did He, like our first father Adam, bend to the wiles of Satan, and imagine that He could be God’s equal. But in willing obedience He subjected Himself to the shameful and bitter death of the cross; while He lovingly passed under the vials of God’s wrath, until God said it was enough. All His wrath toward His people had dissipated: and God could see His beloved people once more in perfect righteousness. Therefore God hath so highly exalted Him, and given unto Him a name above every name.

O, it is true, we see not yet all subjected to Him!

But we do see Jesus!

We behold in Him the beginning of our own exaltation and the hope of our crown!

And that is enough to tide us over until that day when He shall return in His glory to give unto us also the crown of life that fadeth not away!

With our eye of faith firmly fixed on Jesus, we shall overcome all our present woes, even death and the grave. We shall be glorified together with Him.

And when all shall be perfected, according to the plan of God, then He with us shall be subjected unto God; in order that God may become all in all. 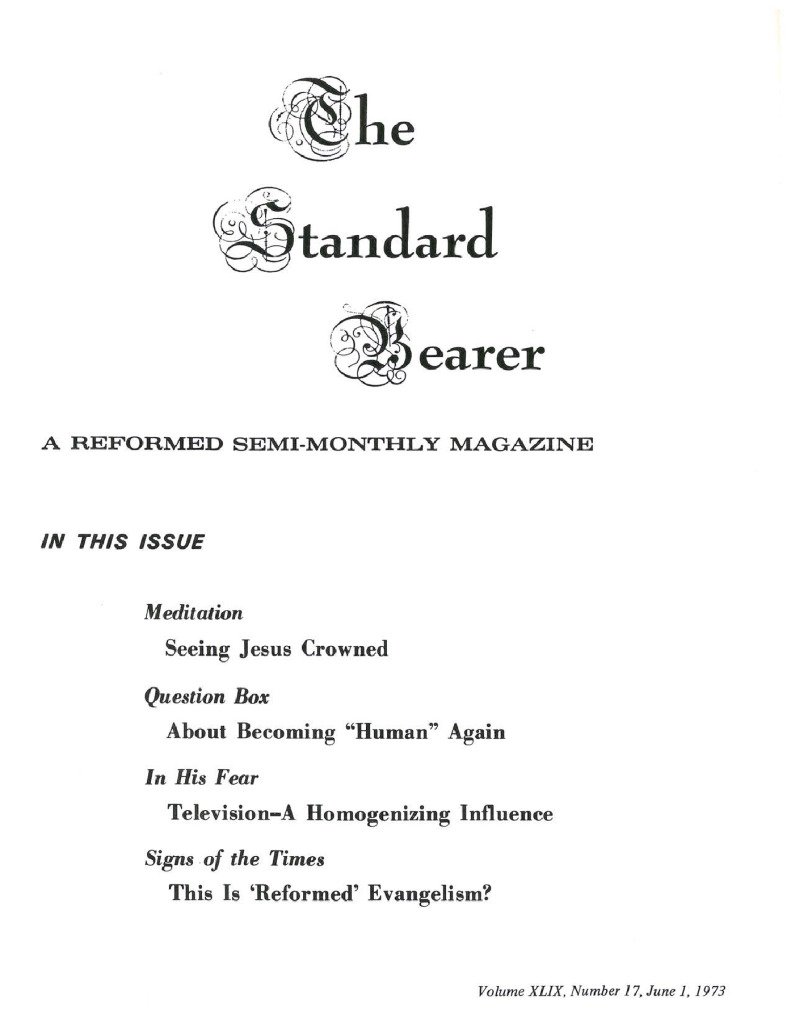