Members, Friends and Supporters of the RFPA

Another year has quickly flown by, and once again it is our privilege, on this special 50th anniversary, to bring to you tonight our annual report on the activities of your Board and Staff, during the past twelve months. This has been an eventful year for your Board and our Business Manager, who was able through the grace of God, to report to us monthly, consistent growth of theStandard Bearer. We surely can see the fruits, of laboring in His vineyard. He has blessed the efforts at spreading His word and the truth through the written page, far beyond our fondest hopes and expectations, by allowing the Standard Bearer to reach into the far corners of the earth. He has given us the financial backing enabling us to produce the Standard Bearerin ever increasing quantity, and most importantly, the dedicated servants who devote many hours every two weeks, producing spiritually enlightening articles for our paper.

Let us give you a few interesting facts:

The 10 for 2 offer has proved to be, the most successful means of increasing our subscription list. Since its inception, we have had 564 responses to this campaign, adding 114 new regular yearly subscribers.

You have also seen the inserts in the Standard Bearerperiodically through the year, urging our subscribers to send in names of interested friends, in order that we might send them a free copy of the Standard Bearer; and your response to this has been gratifying. Over 500 sample copies were requested, resulting in 49 new subscribers. The Board feels this is an excellent way of reaching brethren in other denominations, and we urge you to continue sending in names for free copies throughout the year.

Our last report in 1973 informed you that 1,525 copies were being printed each issue. With this report, we are happy to inform you that 1,700 copies of each issue are now being printed, and 125 additional copies for those desiring bound volumes. Of special interest is our growing list of subscribers in Canada and Australia. More than 100 copies of each issue are mailed to Canada and 75 to Australasia. Over 100 copies are mailed to such countries as Japan, India, Mexico, Germany and even behind the iron curtain to Budapest, Hungary. A grand total of 250 new subscriptions were received during the past year, increasing our subscription list by approximately 15%.

Postal rates have been increasing drastically. It now costs 16e to mail one copy to a foreign country. Our publishing costs have increased 20% during the year. However, we are thankful for the fact that our financial status has kept pace with all these increases, and the Board is determined not to increase the cost of subscriptions, as long as our loyal supporters and churches continue to make up the deficit between publishing costs and subscription income with their many gifts. Our treasury was also given a considerable boost this year through a gift of $4,200 from our former Oaklawn congregation, who specified that this money be used in the distribution of the Standard Bearer in the Chicago Area.

It is most gratifying to all those involved in publishing the Standard Bearer, that a major portion of our time and efforts can be devoted to distribution, and that our financial needs are so wonderfully taken care of by you, our supporters. Retiring this year are the brethren R. Bos, F. Huizinga, and C. Kuiper. We wish to thank these men for the hours spent on the Board during the past three years, and we know that they have enjoyed seeing the growth of the Standard Bearer during these years. A word of thanks also to Mr. Pipe, who continues to handle the mailing of our paper, and also to our able business manager, Mr. Vander Wal for his untiring efforts.

In concluding this report, the Staff and the Board of the R.F.P.A. continue to covet your prayers and your support for this kingdom work, on this our 50th birthday. 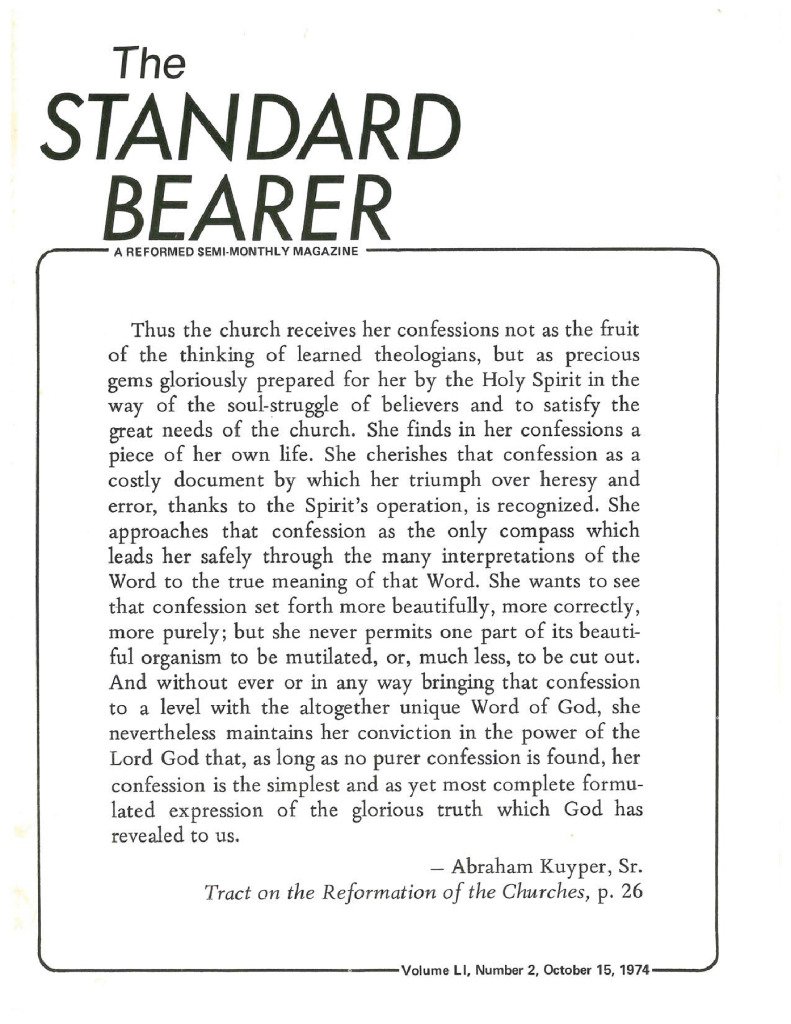