Rev. Herman Hoeksema, in his book The Protestant Reformed Churches in America, makes the following statement:

Although the first issue of the periodical [the Standard Bearer] appeared in October 1924, the purpose to publish a paper devoted to the development and dissemination of the Reformed truth was conceived much earlier. In fact, in their brochure: Om Recht en Waarheit (For Justice and Truth), the Reverends Danhof and Hoeksema already announced their intention to publish a monthly paper in which they might develop the truth. Even before the monthly was published, several brethren interested in the cause of Reformed truth had organized a society under the name “Reformed Free Publishing Association” for the purpose of making possible, from a financial aspect, the publication of literature prepared by the two above-mentioned ministers. Through the efforts of this association the first issue of the Standard Bearer, then edited by the Reverends H. Danhof, G.M. Ophoff and H. Hoeksema and Mr. G. VanBeek, appeared in October, 1924.

Thus began the RFPA and its publication of theStandard Bearer some 82 years ago. Much has happened in those intervening years. The goal of the RFPA, “the publication of literature…in the cause of the Reformed truth,” has been realized not only in the continued publication of the Standard Bearer ever since that first issue, but also the continued expansion of the work in publishing other printed materials in the cause of the Reformed truth. Under the providential care of our heavenly Father, that work of publishing the magazine expanded over the years into the formation in 1963 of a special committee (Permanent Commit for the Publication of Protestant Reformed Literature) to publish books. Then in 1995 that work was merged into the RFPA. Also the original intent of the organization of the RFPA to provide the financial support for this work of publishing the Reformed truth has been blessed over these years by continued financial support for this endeavor.

As we look back at the past year of the work of the RFPA board and its staff, we could list many facts and figures of the work during the times since our last association meeting. This reporting is now ably handled by the RFPA Update, which is published and sent to the association members twice a year. You are kept informed of current and soon to be published books as well as news about the circulation of theStandard Bearer. Once again we were able to produce four books, three of which were book club items. The board, through its book and publishing sub-committee, continues to work on future publications so that we are able to maintain this rate of new publications as well as the reprinting of past books that have proved to be of continuing value for the cause.

Perhaps the major activity of the past year to report to the Association was our move into new facilities in Georgetown Township (Jenison, MI). Perhaps you have noticed the new address on your copy of theStandard Bearer and mailings from the RFPA. This move is the culmination of many years of development. The final impetus for this move was the request of the denomination seminary that we vacate the part of the seminary building, the lower level, that the PRCA had most graciously made available when our expanding books side of the RFPA needed more and more space. A letter of appreciation was sent to the Theological School Committee for their willingness to have the RFPA book operation as a “boarder” for many years. We should also express our public appreciation for the providential use of their space as our book operation has grown through the years.

The significance of the move into our own building is that the RFPA now has a “home.” For many years the work of the RFPA has been conducted in various places— First Church basement, private homes, rented and loaned storage buildings, seminary offices, and lastly in the lower level of the seminary building. The erection of our own building means the consolidation of most of the operation of the RFPA into one building; this includes the business aspects of both the books and the Standard Bearer. The mailing of the Standard Bearer is now done from the new building. To mark the consolidation of all RFPA business activities out of one office, the board has instituted a unified bookkeeping system. All business transactions are now run through one set of electronic books, although the two divisions of the RFPA, theStandard Bearer and the books are kept separate.

Production of books and publication of the Standard Bearer require the dedicated efforts of many laborers in the cause of the Reformed truth. We give thanks to God for His gifts of the Spirit to the many individuals who have contributed to the work of the RFPA, which have made possible the many years of publication. First, we have a dedicated staff: editors, writers, managers, and volunteers who make the work possible. We are blessed with ministers and others who are willing contributors to the various rubrics in theStandard Bearer, as well as those who produce manuscripts for our book division. They should be encouraged by your expressions of appreciation and your regular reading and use of their writing projects. Mention should also be made of the men who are willing to serve on the board of the RFPA, giving of their time for the cause of promoting the Reformed truth through the magazine and books. Our prayer is that God will continue to raise up servants willing and able to continue the work of the RFPA for the years until the return of our Lord and Savior.

Details of the move to the new location were given in the last Update, and many pictures of the new facility are available on the RFPA website www.rfpa.org. If you were not able to attend the open house held this spring, you are encouraged to “visit” the RFPA building on the web and see what a fine facility we have. If you do not have a computer with Internet access, find someone who does, or visit your local library and have someone give you a virtual tour. You will also see many other items on our website, including electronic, searchable copies of theStandard Bearer going back to the year 1975. This database is being expanded each month as we add more back issues

When mention is made of all the volunteer work that goes into the production of our magazine and books, mention should also be made of those who assist by financial gifts. Our operations are possible only through the dedicated giving of supporters of the RFPA, as is born out by the annual financial report. We can report that the new building is without debt: the total cost has been covered by special gifts for the project and using funds on hand from giving over the years.

One of the benefits of the RFPA website and our participation in the Christian Booksellers Convention is the wider international notice of our publications. Many are taking notice of our faithful production of soundly biblical and Reformed materials. There has been interest in our publications and a desire to translate this material in other languages. Permission is usually given if the group or individual is willing to agree with our translation agreement, which they are asked to sign. This agreement allows them to translate and publish if they give credit to the RFPA as the source and provide us with copies of the finished product. One of the issues involved with these translation projects is the request for financial help in the work of spreading the Reformed truth. The RFPA is sympathetic to the needs of these groups, but currently is not organized for this type of “evangelism.” Here is where others among our supporters, especially evangelism arms of our supporting churches, can work with the RFPA. The board would like to hear from these committees as to your interest in the support of such projects. You can contact the RFPA office to let us know of your interest.

As we begin another publication year and look back at the past season and 82 years of operation, we can give thanks to our heavenly Father for His faithfulness in providing the means for this work. Our prayer is that He will work by His Spirit to guide us in this work for the cause of the kingdom of God. 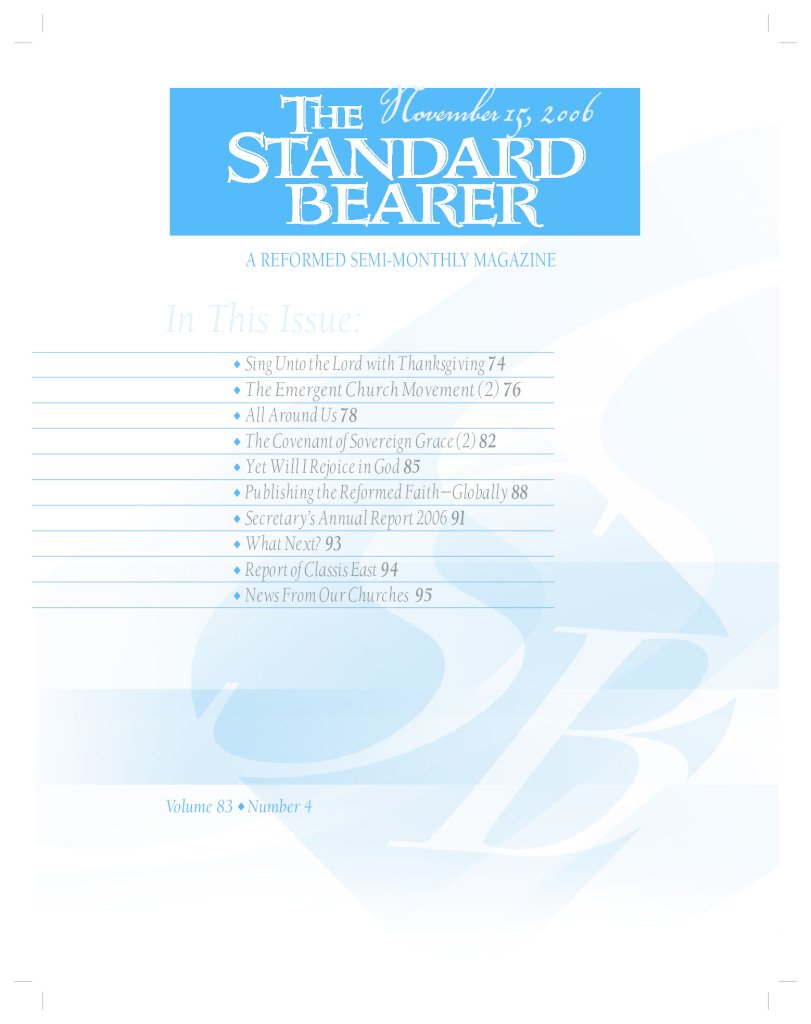