On the fourth day of the creation week, God said, “Let there be lights in the firmament of the heaven to divide the day from the night; and let them be for signs, and for seasons, and for days, and years” (Gen. 1:14). The word seasons in this verse does not refer exclusively to our four seasons; in fact, it refers to the four seasons only potentially, since our seasons did not begin until after the flood. But there are many other kinds of periods or seasons that are controlled by God through the heavenly bodies, especially the moon; “He appointed the moon for seasons” (Ps. 104:19). Included here are the woman’s period, the tides of the seas, bird and animal migrations, animal estrus seasons, optimum time for-planting, and so on. God rules providentially through the sun and the moon, governing these day-to-day affairs of His creatures.

The seasons of the year began after the great, universal flood at the time of Noah. When the “fountains of the great deep were broken up, and the windows of heaven opened,” the earth was tilted on its axis twenty-three and a half degrees from normal. The result of this tilting is that the pathway of the direct rays of the sun is not endlessly upon the equator, but the sun’s pathway “moves” between twenty-three and a half degrees north (our Summer solstice) and twenty-three and a half degrees south (our Winter solstice), passing the equator only on the vernal and autumnal equinoxes. Thus, when God had received as a sweet smelling savor the burnt offerings of Noah and his family after 375 days of confinement in the ark, God promised that while the earth remained “seed time and harvest, and cold and heat, and summer and winter, and day and night shall not cease” (Gen. 8:22). From the time of creation until the flood, not only did it not rain (Gen. 2:5, 6), but there were no seasons either. Seasons, rain, the water cycles, and storms all belong to the world that now is, rather than to the world that then was (II Pet. 3:6, 7). It is likely that during prediluvian history there was a universal, warm climate; this would explain the presence of fossils of tropical life forms, both flora and fauna, in the Arctic regions.*

Scripture also uses the term seasons figuratively to represent a period of time, determined by God, and characterized by a definite set of circumstances. We may read of seasons of rain (Deut. 11:14), the season of the wilderness wanderings (Josh. 24:7), the fruitful season of the righteous man (Ps. 1:3), the night seasons and their tears (Ps. 16:7, Ps. 22:2), animals given their meat in due season (Ps. 104:27), a time and a season for every purpose under heaven (Eccles. 3:1), that God changes the times and the seasons (Dan. 2:21), a season of convenience (Acts 24:25), a season of sorrow (II Cor. 7:8), the saints reaping of a reward in due season if they faint not (Gal. 6:9), the requirement that the Word of God be preached in and out of season (II Tim. 4:2), the times and seasons just before the Lord’s return (Acts 1:7, I Thess. 5:1), the pleasures of sin which satisfy but for a season (Heb. 11:25), a season of heaviness brought on by manifold temptations (I Pet. 1:6), and the season of Satan’s loosing (Rev. 20:3). The child of God may always be confident that the length of all these seasons, as well the circumstances that define them, are ordained by God for his temporal and eternal welfare.

Someone has asked, a bit impatiently, “If Winter’s here, can Spring be far behind?” Granted, most people do not enjoy the Winter as much as the other seasons. But it is God who “giveth snow like wool; he scattereth the hoarfrost like ashes. He casteth forth his ice like morsels: who can stand before his cold? He sendeth out his word, and melteth them: he causeth his wind to blow, and the waters flow” (Ps. 145:16-18). Winter ought not to be the season of our discontent. There is beauty in “the sweep of wind and downy flake.” The crisp air is invigorating and’ conducive to work. Home life is enriched with simple pleasures. (Remember J.G. Whittier’s Snowbound from American Lit. class?) Favorite books are found and re-read; new books are given a careful reading. And the snow itself teaches us what we are through the blood of Jesus Christ. Even whiter than that! 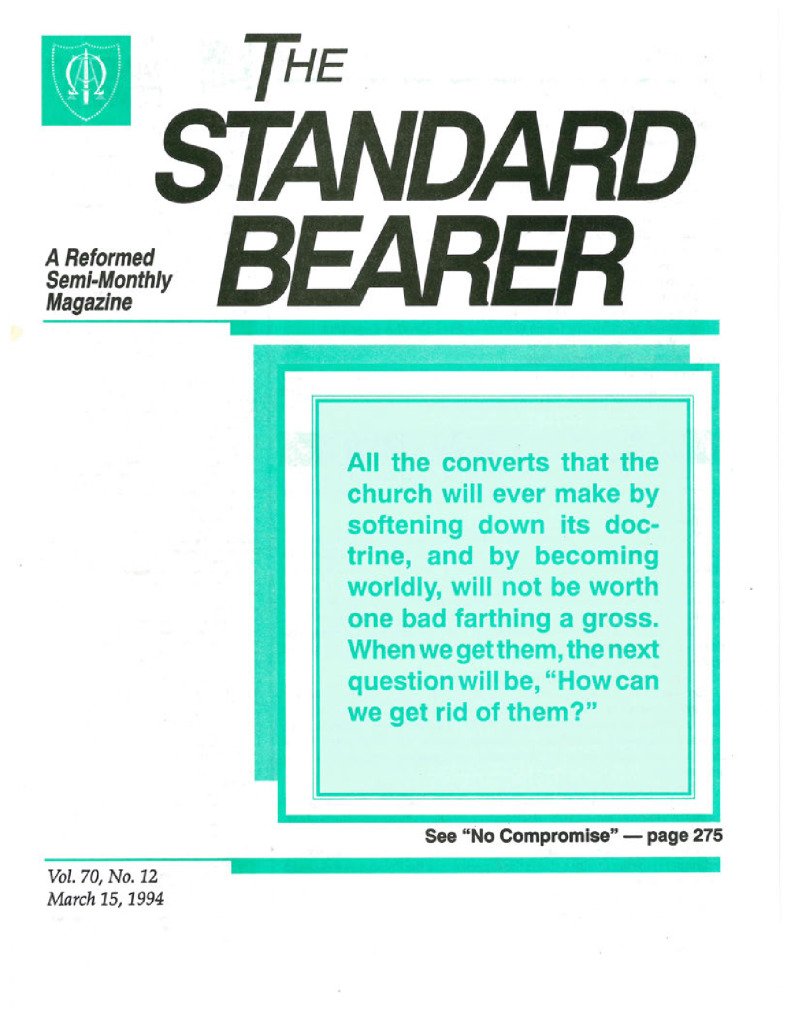