I found much in the July 2018 editorial on Synod 2018 encouraging, though I would like to voice some concerns.

First, Prof. Dykstra uses phrases such as “works are excluded in salvation,” yet the Scriptures at times say that our good works do play an important role in our “salvation” (for example, I Tim. 2:15; I Tim. 4:16). Some Reformed creeds explicitly state we cannot be “saved” without “good works” (for example, Tetrapolitan Confession, Chapter 5: “We utterly deny that any one can be saved unless by Christ‘s Spirit he be brought this far, that there be in him no lack of good works, for which God created him”; and Waldensian Confession 1662, Conclusion: “We are usually [wrongly] accused of believing that…good works are not necessary for salvation”). Of course, these verses and creeds are us­ing “salvation” in a broad sense to include, for example, sanctification, so they in no way deny justification by faith alone, while presumably the professor is using the word in the narrow sense of “justification.” It seems to me that the present controversy is better served by using creedal, technical words such as “justification” (Belgic Confession, Arts. 23-24) and “righteousness” (Heidel­berg Catechism Q&A 61-62) where possible, instead of non-technical and ambiguous words such as “salvation,” which have a broad range of meanings and can easily lead to misunderstandings. Perhaps some of the present controversial statements are only unorthodox if words such as “salvation” are assumed to be meant in the nar­row sense of “justification.”

Second, the brother quotes synod as saying, “Nec­essarily, then, the doctrines of the unconditional covenant and justification by faith alone are compromised.” If synod judges the minister’s statements as compromis­ing the unconditional covenant and justification by faith alone, why would they not be heretical? Synod declared the statements to be “out of harmony with the Reformed confessions”—is that not, by definition, declaring the statements heretical? And if such compromising state­ments are not heretical, why is the minister who made them subject to a theological examination to determine his “understanding and convictions,” something per­haps unprecedented in the history of the PRC, and de­spite the minister already having submitted a written response which Synod 2018 judged “orthodox”?

Third, why does Prof. Dykstra place before the read­er the threat of deposition and even excommunication? Was this threat of excommunication made officially by synod or is it the personal viewpoint of the editor of the SB? While I would certainly want to avoid the sin of slander, especially against an officebearer, the officebearer in question is awaiting his theological examina­tion, so that there is uncertainty and ambiguity about his teaching.

Member of the Limerick Reformed Fellowship, Republic of Ireland

Thank you for taking the time to reflect on the July editorial on the Synod of the PRC. I will try to answer your concerns.

First, your letter states that “Prof. Dykstra uses such phrases as ‘works are excluded in salvation’…” While it is true that the quoted phrase was used, it was immediately explained in the rest of the sentence which was not quoted. There it becomes plain that works in salvation as such, that is to say as fruit, are not excluded. The full sentence reads: “Works have no place in salvation in the sense that works contribute to, earn, or merit salvation.” And the rest of the paragraph gives further explanation:

Further, works are not an instrument to obtaining salvation or the blessing of salvation. Rather salvation is all of grace. All of salvation is in the crucified Christ. Salvation’s benefits flow to the believer through the bond of faith, for faith appropriates Christ with all His benefits. Works are but fruits of thankfulness.

As an aside, the quotations in your letter are from Protestant confessions, containing much Reformed doctrine, but you recognize that they are not explicitly Reformed confessions. At any rate, those isolated state­ments cannot be understood apart from these creeds’ strong affirmation of the truth that our good works are the fruit of God’s saving work in us. The Tetrapolitan teaches that good works are “ascribed to none other, than to this one only Spirit.” And the Waldensian creed states that “.those who are united to [Jesus Christ] by a living faith ought to and really do give themselves to good works” (Art. 20). And when Article 21 speaks of the necessity of good works, it gives as the reason “since God prepared them so that we walk in them.” That reminds the Reformed believer of how the Heidelberg Catechism starts the answer to question 86, “why must we still do good works?” “Because Christ, having re­deemed and delivered us by His blood, also renews us by His Holy Spirit, after His own image; that so we may testify…”

You also express con­cerns with Synod’s lan­guage that the erroneous statements “compromised” the doctrines of the un­conditional covenant and justification by faith, and are “out of harmony with the Reformed confessions.”

You wonder how synod can declare these things about the minister’s state­ments, and yet these state­ments not be considered heretical. Brother, you have expressed in writing what many have asked me personally, so I am thankful for the opportunity to clarify.

First, concerning heresy, understand that there is no official Reformed definition of heresy. However, in their Church Order Commentary on Article 80, Van Dellen and Monsma give a description of heresy that contains the generally recognized elements. They write:

When one deviates from one or more of the fundamental teachings of Holy Writ, as expressed in the confessional standards of the Churches, and that consciously and purposefully, he is guilty of…heresy.

They go on to distinguish heresy from other teach­ings to which someone might object.

The Church Order does not refer to variations from genuinely accepted teachings but which are not definitely expressed in our confessional writings. Neither does Article 80 refer to slight variations regarding subordinate truths. Nor is it the implication that one who unintentionally, through the use of a wrong term or otherwise, states a matter erroneously, thereby makes himself worthy of discipline. The deviation must be conscious and deliberate.

The key point is that heresy is a deliberate devia­tion from or contradiction of fundamental teachings of Scripture as expressed in the confessions.

In that light, then, synod spoke not of heresy—teach­ing that directly contradicted the confessions, or teach­ing that clearly deviated from the confessions. Rather, synod spoke of certain doctrines being “compromised.” The word “compromise” can have various shades of meaning. The sense that best captures it here, I believe, is “injure.” Perhaps an illustration is in order. One can speak of a human body’s immune system being compromised by a virus. One can speak of a virus compromising the security of a computer. Something is present that ought not be. Something needs to be stopped. If it is not, it will do serious damage to the entire system—take over the body’s immune system, or, permanently shut down the computer. This is a se­rious matter.

Finally, as to the warning issued at the end of the ed­itorial, it was my own. Since the time that the editorial appeared, synod approved Rev. Overway’s Formula of Subscription examination. However, the warning had nothing to do with his examination. My warning was about the teaching itself and the fact that synod, in its condemnation, did not declare it to be heresy. For that reason, members of the PRC may not declare it to be heretical. 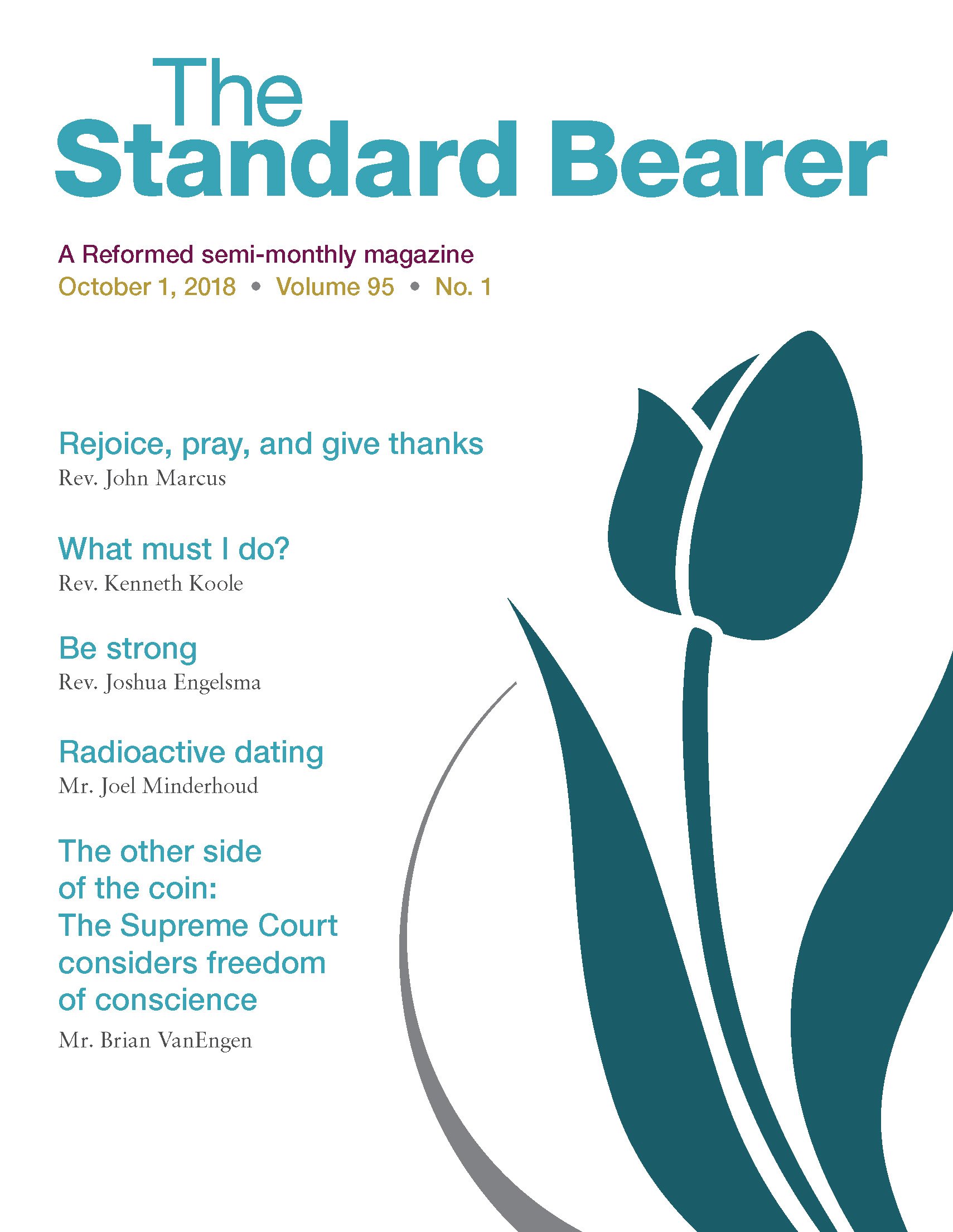