Running Into the Strong Tower

Running Into the Strong Tower

The name of the Lord is a strong tower: the righteous runneth into it, and is safe. Proverbs 18:10

With this issue we are once again at the beginning of a new year. Many thousands will greet each other with a “Happy New Year.” Many of these will do so thoughtlessly, not realizing the implications of their words. Others may do it out of habit, not caring whether that happiness is realized or not. Some say it with doubt or fear, not knowing whether that happiness will be theirs or not.

In all of this there is an element of wistful vanity. For what blessing can we bestow upon another if the blessing of God is not upon us? What real happiness is it that does not have its source in the eternal city that hath foundations, but instead in the temporary earth that is surrounded by death?

In general, the new year will be much like the old. It will be a year of labor and sorrow. There is not a way out, for this is reality. What then shall the church say? Shall she join the world in its vain pursuit of a happiness of this world? Shall she boast of chariots and horses, tanks and guns, in order to put her confidence in them? God forbid! Rather, we should mention the name of the Lord, for it alone is a strong tower.

The truth of God in Proverbs is often emphasized by contrasts. In verse 11 we see the rich fool who puts his confidence in riches, who is not rich in God, who belongs to the unrighteous rich. Riches are contrasted with the name of the Lord as the ground of our confidence. The figure of a city as an imaginary stronghold stands opposed to the solitary high and strong tower. This is the vain safety of the unrighteous as he hides behind his imaginary wall contrasted with the sure refuge of the righteous in the tower.

The calling of the church is to draw this contrast sharply at all times. It may seem dangerous to leave the city of things that are seen and run to a solitary tower, yet there is no other way. You must choose either-or, for you cannot put the tower of God in the city of the rich fool. The righteous alone run to this tower, and that by faith. Here, he is safe.

The strong tower as designated in the text is the name of Jehovah. He reveals Himself to us, first of all, in His creation. The name of the Lord is in all the works of His hands, as seen in Psalm 8:1, 9. The brute creation reveals God in the sun, moon, stars, mountains and valleys, oceans and seas, forests and fields. He is also revealed in the living creation: man and beast. All are called forth by His Word and are so many letters spelling the name of the Most High. He causes the sun to rise and to set, clouds to gather and the rain to fall on the thirsty land. He makes the seed to sprout and prepares food for man and beast. He directs the whole creation to the end that He has determined from before the foundations of the world: the glory of His everlasting kingdom (Ps. 75:1).

Yet God’s name is not revealed in all its glory in the creation; that is only so when we see it in the name of and in the light of Jesus. It is only when we behold the whole glorious name of the Lord from the standpoint of that one name that it becomes the strong tower of refuge into which the righteous runs for safety. Apart from that one name, the revelation of God in the things that are seen surely brings the name of God to us as a name of power and might, to be glorified and feared, but it also reveals the wrath of God. It proclaims that God is angry with the wicked and that He will visit them in judgment and punishment in time and eternity (Rom. 1:18). Man by nature does not flee to such a name, for it is a terror for him. He flees as far from it as possible. It is a name of consuming fire. Who would flee to that? It speaks to us in the curse that all creation bears—thorn, thistle, barren desert, roaring volcano, in hail and fire, in pestilence, death and war.

But the name of Jesus reveals to us God as the God of salvation. It is not simply another name for them that seek refuge in that high tower; but in the light of the name Jesus, the creation that speaks death takes on new significance, so that we are not filled with fear but are assured of salvation. It is God’s eternal purpose to glorify Himself in the revelation of His name. For that purpose He ordained His Son to be Christ, the Head of the church, the Firstborn of every creature. He gave the church to Christ in order that all the fullness of God in Christ might shine forth in everlasting beauty. He determined that this church in Christ should be glorified through the deep way of sin and death unto righteousness and the everlasting life of the resurrection. That name was revealed in Christ’s entire ministry as the reconciliation in the accursed tree and death of the Son of God (II Cor. 5:19), and in His resurrection and ascension. And when He makes all things new, God shall tabernacle with men forever more.

We have in our text a figure of a refugee that is pursued by enemies in an open plain. The enemy rushes in from all sides, determined to destroy him. There appears to be no way out. But, in the center of the vast open plain, he sees a solitary tower rising. Into it he runs for safety.

So it is with the man that runs into the safe retreat of the name of Jehovah. He is in a hostile country with many enemies surrounding him, all seeking his destruction. This includes the powers of darkness, the forces of sin and death, the devil and the world, the sufferings of this present time, sickness and pain, want and famine, greed and hatred, prison and death. But the name of Jehovah is revealed to him as a safe retreat. It is a tower that rises above the world of things that are seen. It is strong, for it is the name of eternal and unchangeable love that will never let those who seek refuge in it perish. It is the name of almighty power, against which no enemy can prevail. It is the name of infinite wisdom that has designed all things to be subservient to its purpose: the safety of those that seek refuge in the tower.

The running into this tower is an act of faith, as seen in the figure itself. If you flee into the tower when you are surrounded by enemies, you cut off every means of escape. You risk everything in that tower and put all your stakes in the safety of that tower.

So it is with the name of Jehovah. It means that you place complete confidence in that name, trusting in Him as the God of your salvation in life and in death, in peace and in war, in health and in sickness, in prosperity and in adversity. Therefore, your trust is in nothing else but His name. This implies that you are fully assured that the name of the Lord is powerful to save, no matter what powers of darkness may oppose or threaten your destruction. It also implies that you are conscious of your need, your sin and guilt, your death and helplessness, all your miseries, and that you take them all to that tower in the confidence that in it there is escape from them all.

Thus, the antithesis must be maintained. It is either-or, God or mammon. If you put your trust at all in mammon, you cannot at all put it in Jehovah. For deliverance from death unto everlasting glory you seek refuge in Christ as the resurrection and the life; or you plead entrance on the basis of your own deeds.

The runner in this case is the righteous because the running is an act of faith and only the righteous possess faith. He is delivered in principle from the power and dominion of death by the Spirit of Christ, and walks in newness of life.

Therefore, in the light of this truth, may you have a happy and blessed New Year. May it be understood that this benediction has no reference to the imaginary happiness of the fool in the rich man’s city, but only to the real and imperishable happiness of those who run into the strong tower of the name of the Lord. In that tower there is happiness for the new year—and forever. 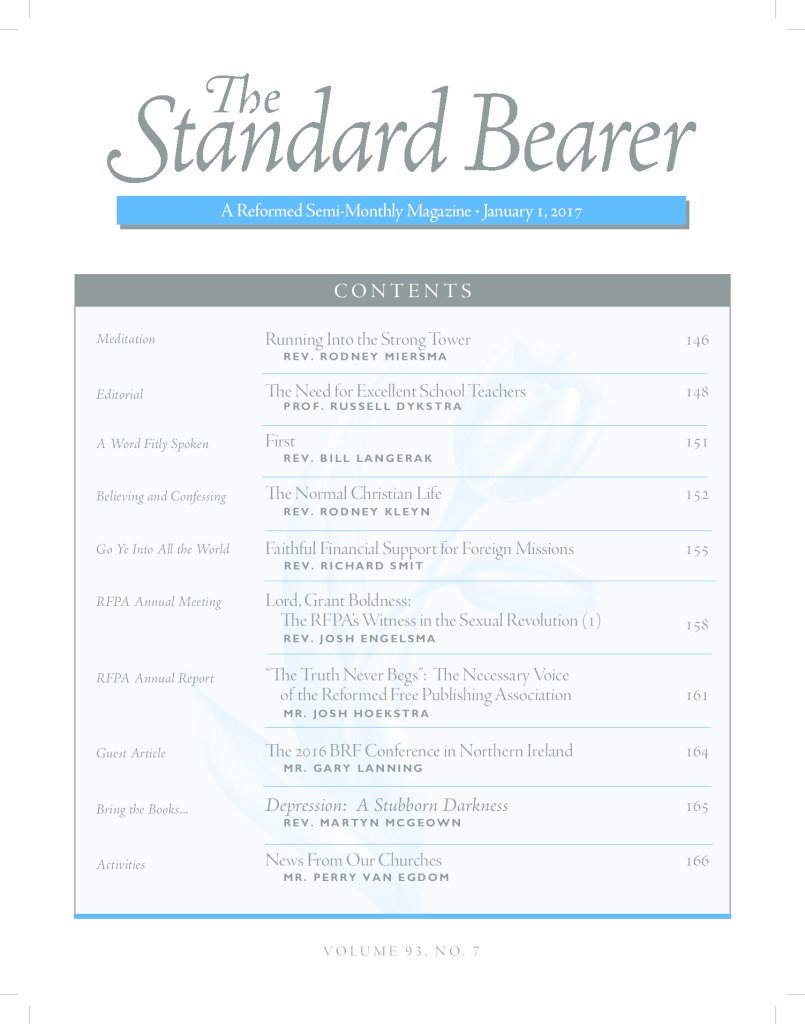