“The abortion matter is not before us in the first instance, and coming as it does after nearly 20 years of litigation in Roe’s wake, we are satisfied that the immediate question is not the soundness of Roe’s resolution of the issue, but the precedential force that must be accorded to its holding. And we have concluded that the essential holding of Roe should be reaffirmed. Yet it must be remembered that Roe v. Wade speaks with clarity in establishing not only the woman’s liberty to terminate her pregnancy but also the State’s important and legitimate interest in potential life.”

On June 29 of this year the Supreme Court finally released its decision in the prominent case of Planned Parenthood v. Casey. At issue were several Pennsylvania abortion restrictions challenged by Planned Parenthood: a 24-hour waiting period; a spousal notification requirement; prior notice to a parent of a minor requesting abortion; and abortion facility reporting requirements.

Many pro-life organizations, and even the Bush administration, filed briefs in the case imploring the Court to use Casey to overrule the notorious Roe v. Wade. Some Court watchers predicted that, because Reagan/Bush appointees now have a narrow majority, the Court would finally jettison Roe’s erroneous notion that the Constitution guarantees women a “fundamental right” to abortion on demand.

Surprisingly, it was not to be. Three “moderate” justices (Kennedy, Souter, and O’Connor) joined the liberals Blackman and Stevens to form a joint majority that reaffirmed Roe’s “central holding” that the constitutional concept of “liberty” embraces “a woman’s right to terminate her pregnancy in its early stages.”

Not unimportantly, the Casey Court also adopted the Roe concept of viability- “the time at which there is a realistic possibility of maintaining and nourishing a life outside the womb.” Before viability, the Court held, a woman must have the unimpeded right to terminate her pregnancy; after viability the State may interfere to protect its interest in protecting life. Thus, although the majority rejected the trimester framework of Roe, it nonetheless retained the viability test to “balance” the State’s interest in protecting life over against the mother’s “own conception of her spiritual imperatives and her place in society.”

But the majority also held that the woman’s right to abortion-on-demand is not inconsistent with the State’s “profound interest in potential life.” Accordingly, Casey held that states may raise certain abortion restrictions before viability so long as these restrictions do not result in an “undue burden” on the woman’s right to an abortion-on-demand. “Undue burden” was defined as a “substantial obstacle in the path of a woman seeking an abortion of a nonviable fetus.” Thus, although States may regulate abortion-on-demand, they may not prevent it, at least before viability. In conclusion, Casey affirmed Roe but substituted the trimester framework with the undue burden test, keeping the viability standard intact.

The Doctrine of Precedence

The Casey majority opinion is especially noteworthy, however, because of the majority’s stated rationale for reaffirmation of Roe – the doctrine of precedence. This historic judicial doctrine obligates a court to abide by and follow previous decisions. Declaring that “the legitimacy of the Court would fade with the frequency of its vacillation,” the three moderates more or less reluctantly felt compelled to join the two liberals on the Court and reaffirm Roe, its soundness or lack thereof notwithstanding. The majority also surmised that overruling Roe would possibly be interpreted as “surrendering to political pressure,” and accordingly, to “overrule under fire . . . would subvert the Court’s legitimacy.”

We believe that Roe was wrongly decided and that it can and should be overruled. One cannot ignore the fact that a woman is not isolated in her pregnancy, and that the decision to abort necessarily involves the destruction of a fetus. The Court was mistaken in Roe when it classified a woman’s decision to terminate her pregnancy as a “fundamental right….” In our view, authentic principles [of precedence] do not require that any portion of the reasoning in Roe be kept intact. It is our duty to reconsider constitutional interpretations that depart from a proper understanding of the Constitution.

In addition, the dissent scoffed at the majority’s new “undue burden” test or standard to determine which State abortion restrictions will now be permissible and which regulations must be struck down by federal courts:

In that this new standard is based even more on a judge’s subjective determinations than .was Roe’s trimester framework the standard will do nothing to prevent judges from roaming at large in the constitutional field guided by their own personal views. The “undue burden” standard is plucked from nowhere . . . and will engender a variety of conflicting views.

Although the minority dissent of Justice Scalia and his colleagues is very effective in exposing many of the errors and inconsistencies of the majority joint opinion, the dissenting opinions are also very disappointing in an important respect. This is because the dissent refuses to acknowledge the obvious “personhood” status of the fetus.

Rather than assert the life and liberty rights of the fetus, the dissent merely argues that the abortion issue is essentially a legislative not a judicial issue. Justice Scalia’s dissent is typical in this regard:

The States may, if they wish, permit abortion-on-demand, but the Constitution does not require them to do so. The permissibility of abortion, and the limitations upon it, are to be resolved like most important questions in our democracy: by citizens trying to persuade one another and then voting.

In other words, Justice Scalia’s view is that, since reasonable people have differing views on abortion, and since the Constitution arguably says nothing about it, the question should be resolved by a vote in each state’s legislature. The Supreme Court (whose duty is to interpret the Constitution) has no business deciding abortion issues arguably not addressed in the Constitution.

Accordingly, even the dissent in Casey affords Reformed Christians little hope that in the near future the life of unborn children will be afforded deserved Constitutional protection. For contrary to Justice Scalia’s assertion, surely the issues of the right to life and when “personhood” begins are decidedly not political questions to be decided by a majority vote in some state legislature. The right to life is society’s most fundamental right, and the Supreme Court may not abdicate its responsibility to render a decisive and final decision in this regard, affording necessary legal protection for the unborn. 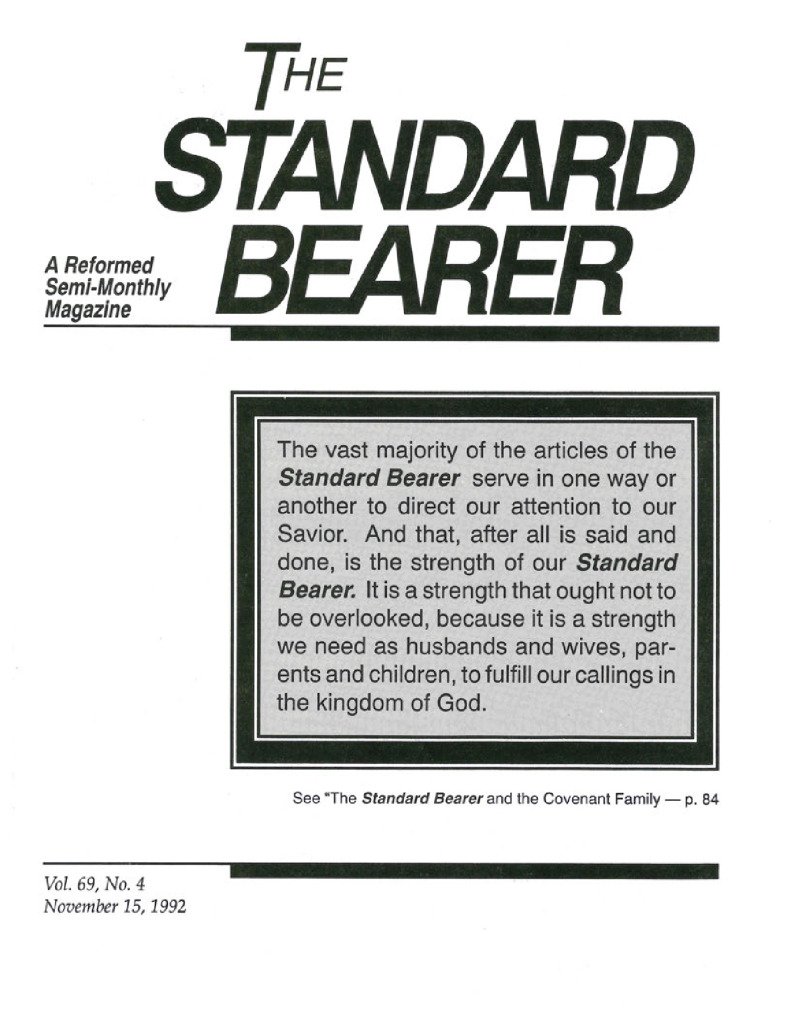