The history of the spread of the gospel is a fascinating one. It is the account of God raising up brave, gifted individuals and using them to penetrate heathen cultures and customs by the proclamation of the gospel. Robert Morrison, prepared by God to spread the gospel to China, was one of these men.

Morrison was born January 5, 1782, the youngest of eight children, to parents who attended a Scottish Presbyterian church. While in his teen years, he was apprenticed to his father, a manufacturer of wooden forms used in shoemaking. By the age of 19, Morrison felt compelled to the ministry and prepared for it by studying the Bible and learning biblical languages in his spare time. As he read articles in the mission magazines of the day, Morrison became increasingly interested in ministering to foreign nations.

Opposition from his parents, especially his mother, prevented him from acting on his intentions. He had promised his mother that as long as she was living, he would not leave her, to go abroad. He cared for her in her illnesses until she died in 1804 and then applied to the London Missionary Society (LMS) for foreign service. He was accepted and began training even though his family and friends continued to oppose his desire to go overseas. They saw in him tremendous gifts and encouraged him to pursue some of the many opportunities available for ministry at home. But, while family members might have called Morrison stubborn, God was working in him a steadfastness for foreign missions.

For a while, Morrison was not clear as to where he should go. He struggled between Africa and China and prayed that God would station him in that part of the missionary field where the difficulties were greatest and, to all human appearances, the most insurmountable. That is not a prayer that most of us would be so willing to offer to our heavenly Father. But Morrison desired to be spent by God in the service of promoting the gospel. After his professors encouraged him to use his linguistic gifts in China, Morrison made contact with a Chinese living in London who began to teach him the Chinese language. He studied a Latin/Chinese dictionary along with portions of the New Testament that had already been translated by the Jesuits.

Morrison was ordained in 1807 by the Scottish church for mission work in China under the auspices of the LMS. Obstacles continued, however, in that the society desired to send two men together, but there was no one to accompany him. In addition, all the ships going to China were from the East India Company, who refused to transport missionaries. Finally, he was sent alone on a ship that was sailing to Canton, China via the United States. On his voyage he had a conversation with the owner of the ship, who said: “And so, Mr. Morrison, you really expect to make an impression on the idolatry of the great Chinese Empire?” Morrison replied, appropriately: “No sir, but I expect God will.”

Morrison reached Canton in September of 1807 after a voyage that lasted nearly seven months. Once he began his work, he encountered many obstacles. It was nearly impossible to study the Chinese language with the intent of being involved in evangelism in any way. It was difficult to find a place to live or people who would assist him. God, in His providence, eventually led Morrison to two Roman Catholic converts who agreed to tutor him. These men were so afraid of getting caught that they carried vials of poison at all times to use in case they were captured. They would rather die than suffer at the hands of the Chinese authorities.

In spite of the loneliness and lack of support, Morrison made good progress in the first couple of years. The East India Trading Society was so impressed with the Chinese/English dictionary and grammar guide Morrison produced that they offered him a lucrative position as their official translator. Knowing that this would be the only way that he could continue in China, Morrison took the position and reluctantly became one of the first “tent-making” missionaries. Morrison translated the Bible and many pieces of Christian literature into the Chinese language. He also published a number of important works, including A View of China, for Philological Purposes, which contained an outline of Chinese chronology, geography, government, religion, and customs, designed for those who were studying the Chinese language.

William Marshman, one of William Carey’s colleagues in Serampore, India, had also started translating the Bible to Chinese about this time. Marshman’s version was finished more quickly, but Morrison was determined to have a more complete and accurate product. Morrison took the time to revise his translation thoroughly before printing, and consequently his translation was more widely used by the Chinese and became known as the most significant.

When his translation of the New Testament was made public in 1815, East India Company officials called for him to be immediately dismissed. Though his future in China was uncertain for a time, Morrison’s work as translator had made him so indispensable to the company that they never carried out their threat.

While living in China, Morrison became acquainted with Mary Morton, the daughter of a doctor who was also working there. They married and were blessed with three children, one of whom died in infancy. The East India Company restricted women from living in Canton, so Morrison had to leave his family in nearby Macao, a Portuguese colony. He traveled back and forth between the two locations until Mary’s poor health required her and her two small children to move to England. After six years of being separated from his wife and children, Morrison was reunited when they returned to China in the summer of 1821. Sadly, his wife died a short time later. The following year Morrison made the difficult decision to send his twelve-year-old daughter and seven-year-old son back to England, so that they could be brought up in the church and taught the fear of the Lord.

Because of the difficulties of bringing more missionaries to China, the LMS turned their focus to Malacca, where William Milne and his family resided and where a Christian college had been established. By the early 1820s a group of 60 Chinese were meeting regularly for worship in Malacca. This work became the launching point for mission work through Southeast Asia, including Singapore. Some of the believers from Malacca later moved to Singapore and were instrumental in helping establish Christianity in that city. The first Protestant missionary was sent to Singapore in 1819, the year that Singapore was founded. Rev. Samuel Milton stepped ashore on October 25, sent by the LMS.

Morrison also worked in Singapore. In 1823 he met with Thomas Stamford Raffles about the possibility of establishing a college to promote the gospel. While there was enthusiastic support initially, Raffles unexpectedly had to leave Singapore and no one else was willing to push for the project. To Morrison’s great disappointment, the plan never materialized.

Morrison returned to England in 1824 for his first furlough after 17 years of labor in Asia. While it took seven years for his first convert to be baptized, by this time a small church had been established. Many more Christians were believed to be in the area, but, out of fear of persecution, refused to make themselves known by attending Bible studies or worship services.

Morrison had become recognized for his work throughout Southeast Asia, and when he ar rived in England he unexpectedly found himself to be a celebrity. He was in high demand for lectures and conferences. He spent much time promoting foreign missions and recruiting missionaries for work in the lands he had visited. During his furlough he met and married his second wife, Elizabeth Armstrong, and returned to China in 1826 with her and his two children. Morrison was blessed with four more sons with his second wife.

While he continued translating and publishing much Christian literature, the majority of his time was spent as negotiator between the Chinese and the English, settling disputes over trade issues. Then troubles arose on both political and religious fronts. Due to political tension between China and England, war resulted. The conflict required Morrison to send his wife and younger children tearfully back to England in 1832. The Roman Catholic Church became increasingly incensed at his work, and in 1833 refused to allow the printing of any of his translations. Many faithful saints still tried to get his literature published, but it became much more difficult. Then, before he had even received word of the safe arrival of his family in England, Morrison died in the arms of his son at the age of 52, after a bout of sickness. His death providentially coincided with the forced departure of the East India Company from China.

A study of the life of Robert Morrison gives occasion for at least three observations. First, the opposition he faced in China was less from the heathen than from Rome. While this shocked and discouraged Morrison, we too must expect our chief opposition to come from the apostate church. Second, the history of Morrison’s life stresses the importance of a godly upbringing and parents who encourage their children to read good religious literature. It also is an inspiration to missionaries to write regular newsletters and mission related articles and to parents to make certain that their children read them. Finally, the history sets forth the impact that a person can have as a witness for God while laboring full-time in a secular occupation. Morrison was employed full-time with the East India Trading Society almost the entire time he was in China. Nevertheless he accomplished so much for the sake of the gospel that he is known as a significant figure in the history of missions to China and Southeast Asia.

The prayer that Morrison uttered was answered. God gave him the grace to persevere in one of the most difficult situations ever faced by a Protestant missionary. There were not more than a handful of converts when he died, but God worked through him a beginning. Morrison was able to write:

There is now in Canton a state of society, in respect of Chinese, totally different from what I found in 1807. Chinese scholars, missionary students, English presses and Chinese Scriptures, with public worship of God, have all grown up since that period. 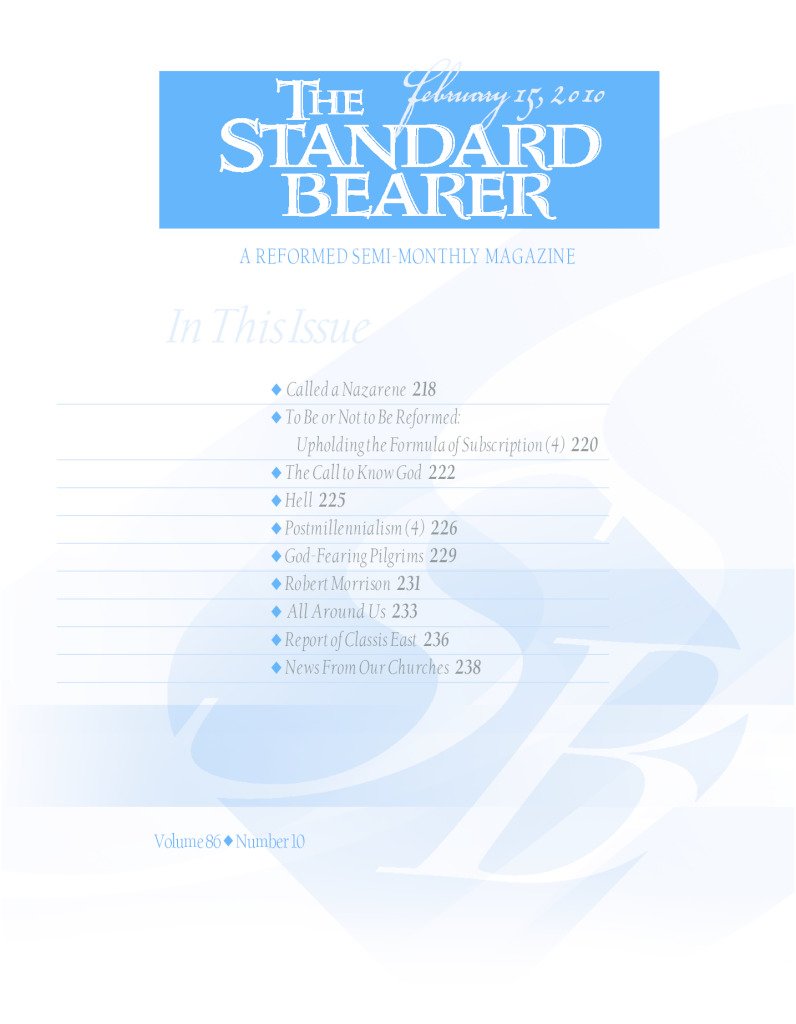