Rev. Hoeksema’s Anniversary and its Significance for our Churches

Rev. Hoeksema’s Anniversary and its Significance for our Churches

It is indeed an occasion for great rejoicing that has brought us together here this day. It is approximately twenty-five years ago that our highly respected, and greatly beloved brother in Christ, the Rev. Herman Hoeksema, was called and ordained unto the ministry of the Word and of the holy sacraments. In him the Lord has given unto His Church an outstanding and able minister of His Word, and equipped him with singular gifts wherewith to labor in that ministry. By the grace of God he did not squander or bury the talents entrusted unto him by his Lord, but labored faithfully and diligently in the calling unto which his Lord had called him. Even the boldest enemy would not dare to deny that he has spent himself in diligent service. He has always and uncompromisingly applied unto himself the saying, which he often he’d before us as students, “het is beter om te verslijten dan om te verroesten.” We, as Protestant Reformed Churches, end especially we who are now his co-laborers in the ministry of the Word, have greatly profited by his instruction, and feel that we owe him a great debt of gratitude. Therefore it affords us great pleasure to extend to him our sincere and heartfelt congratulations on this twenty-fifth anniversary of his ordination to the ministry of the Word of God, and add the hope and prayer that the Lord may continue to spare him for many years for his family and for our churches.

Our joy, however, is tempered with a feeling of sadness. The churches for which he had prepared himself to labor in the ministry, and in the which he was also called and ordained unto that ministry, and which at first did not fail to recognize his many promising talents by bestowing upon him many distinguished and signal honors, ruthlessly and cruelly cast him out when he was still on the very threshold of his career. They sought to silence him long before he had reached the zenith of his latent powders. He, who was hailed as a great and outstanding leader, was soon despised as an outcast. We may well ask, why this sudden and abrupt change of attitude on the part of the Christian Reformed Churches? Why did the churches, in the which he was so signally honored, heap upon him their enmity, their hatred and scorn, which finally led to Ills shameful deposition? Was it because he became a heretic and sought to inculcate false doctrines? Indeed not! Even the very Synod of 1924, which laid the foundation and basis upon which he was ultimately suspended and finally deposed, was forced to confess that he was fundamentally reformed, and to this very day there is none who would dare to deny this. The very opposite was true. Just because, according to the Formula of Subscription, he so courageously, unflinchingly, and uncompromisingly fought against the heresies of Arminianism and worldliness, and defended the truths of God’s absolute sovereignty, and of the antithesis of sin and grace, he heaped upon himself the scorn and enmity of the unfaithful and lukewarm Christian Reformed Churches.

Time does not permit us to go into detail, but let us briefly review the history of this case. It was a turbulent world twenty five years ago, when the Rev. H. Hoeksema was ordained into the ministry of the Word of God. Then, even as today, the world stood upon the threshold of a world-wide conflict. Then, as today, political, economic, moral and spiritual foundations were being shaken. In the midst of this turbulent world the Christian Reformed Churches, which for years had doctrinally been very weak, were being threatened with a stream of humanistic Arminianism, and of worldliness. Doctrinally, the truth of God’s sovereign grace was being sacrificed upon the altar of Arminianism with its passion to save souls for Christ, so prevalent in the American church world, and the truth of the Antithesis was giving way to a synthetical attempt to amalgamate the church with the world, Jerusalem with Athens. Spiritually and morally there was a spirit of worldliness, which at that time was beginning to reveal itself, and now has reached a stage of overwhelming proportions, as became evident at their last synod, in connection with the investigations of Calvin College. It was the firm conviction of the Reverends Hoeksema and Danhof, and they based their convictions upon the Word of God, that in Common Grace, which at that time was but a prevalent theory, but since 1924 has become part of the official and accepted doctrines of the Christian Reformed Churches, in the well-known ‘Three Points,’ lay the fundamental cause of much of the worldliness and doctrinal unsoundness of these churches. It was because they warned against this theory of Common Grace, which virtually denies the truth of God’s sovereignty and of man’s total depravity, and which principally denies the truth of the Antithesis and lays the foundation for the amalgamation of the church and the world, and therefore refused to submit to the-heresies contained in the ‘Three Points’, that they were suspended and finally deposed. No not because they were unreformed, neither because they were in disagreement with our Reformed standards, which we as Protestant Reformed Churches still maintain and love, but they were deposed because they were in disagreement with the heretical ‘Three Points.’

Yet, also in this sad history, we acknowledge the Sovereign grace of our God. Even as Joseph said unto his brethren, thus also we as Protestant Reformed Churches may say, “they thought evil against us, but God meant it unto good”. It was in the last analysis not man, but it was God that called the Protestant Reformed Churches into being, even though this does not leave the Christian Reformed Churches without excuse. God realizes His eternal purposes, also in respect to His church, even through the wickedness and corruption of men. Thus it is always in the history of the church. It often seems as though the enemy harms the cause of God’s kingdom in the midst of the world, but in reality they are but means whereby God realizes His eternal purposes. Heresies within the church have always inspired the militant church to a greater exercise of her faith; and worldliness within the church, has always spurred the faithful to greater watchfulness and prayer. If there had never been a heretic as Pelagius, a hierarchy of Roman Catholicism, a false teacher as Arminius, then there would never have been an Augustine, a Luther, a Gomarus or a Synod of Dordt. Even so the heresies contained in the Three Points’ were a challenge to the Rev. Hoeksema and his colleagues. How firmly, heroically, and uncompromisingly they met this challenge to defend the truths of God’s sovereign grace and man’s total depravity is a matter of history, and it is our hope and prayer that he as well as all of us may be faithful even unto death. 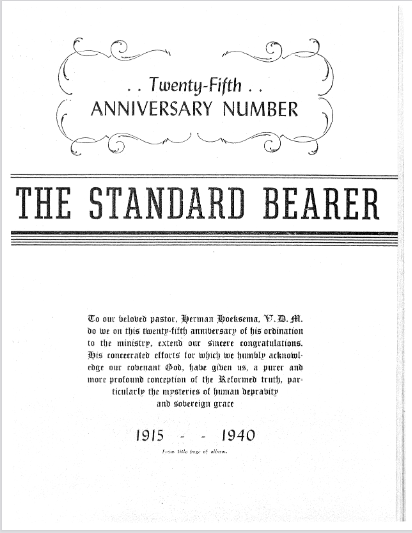