In our issue of September 15, 1971, page 488, we called upon the Reformed Journal to repudiate, the rank universalism from the pen of Gracia Fay Ellwood in its July-August issue. We referred especially to the following paragraphs of the Ellwood article:

What sort of supernormal events shall we look for? Our creed says that Jesus will return in glory, and that his Kingdom shall have no end—that is, no limit, for he is Lord of all. I am not sure just what it means that Jesus will return, but we can be sure that it means more, not less, than the wildest and most beautiful thing ever imagined. If his Kingdom shall have no limit we can expect that every moment of past time will be transformed; that is, every human being that ever lived, every animal, every blade of grass will be revealed as transformed and charged with the glory of God.

Let us hasten the great day! For he is able to do far more abundantly than all we ask or think!

We commented that the entire article was gospel-less and that there was much in this “sermon” which could be criticized. But we called special attention to the rank universalism which appears in the above paragraph in a magazine which purports to be “A Periodical of Reformed Comment and Opinion.”

We concluded our comments with the following call for repudiation:

But this universalism is about the worst thing they have published recently.

I would like to see a repudiation by a responsible representative of the Reformed Journal, and, along with it, some thorough-going “Reformed Comment and Opinion” about the entire miserably modernistic article.

Or do the members of the editorial staff. . . agree with this modernism and call it “Reformed Comment and Opinion?” Let them say!

Somewhat to our surprise, the Reformed Journalresponded to this call for repudiation, and in its editorial columns in the December, 1971 issue it published a repudiation.

A repudiation, that is, Reformed Journal style!

Or should I say: Dr. James Daane style? For true to style, Dr. Daane is again right—or, at least, half right this time—but dead wrong.

Here are the pertinent paragraphs of the repudiation proper:

Gracia Fay Ellwood’s “Birth of a New World” (July-August issue) was a beautiful, sensitive piece. Its conclusion, however, brought me up short: “If His Kingdom shall have no limit we can expect that every human being that ever lived . . . will be revealed as transformed and charged with the glory of God.” Ellwood writes more as a poet than theologian (But it was called a “sermon,” not a poem; i.e., proclamation and exposition of the Word of God. HCH); nonetheless I wondered about this apparent expression of universalism.

Professor Homer Hoeksema, editor of the Standard Bearer, the voice of the Protestant Reformed Church, (should be: Churches, HCH) wondered too. In an editorial, “Rank Universalism,” he challenged some responsible editor of the Reformed Journal to declare that this journal does not endorse one possible implication of Ellwood’s statement, that is, that all men will be saved. I herewith, at the request of the editorial staff of this journal, do so declare. For what follows, I alone am responsible.

To “what follows” we shall call attention later. But what about the above repudiation?

This is what I characterized as a repudiation,Reformed Journal style.

It leaves one with the distinct expression that theReformed Journal does what little repudiating it does only very reluctantly. In fact, and almost gets the impression that they do their repudiating only because someone caught the Journal with its hand in the cookie jar, that is, because the universalism was so brazenly obvious that even the Reformed Journal could not very well escape its implication. Some measure of repudiation was necessary.

But by all means the repudiation must be minimal! It must be tempered and qualified and carefully circumscribed. It must not be understood as a repudiation in toto of the Ellwood article. In fact, it must not even leave the impression of a total and flat repudiation of Ellwood’s universalism.

Notice how the Journal hedges.

First of all, in the editorial comments (unsigned) on the contents of this issue Dr. Daane’s article is introduced as follows: “James Daane, Journal-Editor and Director of the Pastoral Doctorate Program at Fuller, responds to a response to an article in the July-August issue, whose conclusion ought not to have appeared, according to some, in a journal that calls itself Reformed. Daane finds a certain irony in that charge.” Notice two things: 1) The concern is only with the conclusionof the article, as though all the rest were good. 2) Already here the Journal does not say flatly and objectively that this universalistic conclusion ought not to have appeared, but only that “according to some” it ought not to have appeared. I ask: does the Journal repudiate, or does it not?

In the second place, Dr. Daane qualifies his repudiation also. He calls the Ellwood article “a beautiful, sensitive piece,” as though all of the article with the exception of this one element of universalism was sound and Scriptural. Fact is that the article in its entirety was devoid of the gospel and thoroughly modernistic. Fact is, too, that even in the short quotation made by us there were other obviously bad statements. For example, “I am not sure just what it means that Jesus will return. . . .” And again: “Let US hasten the great day!” (emphasis added) Fact is, too, that the Standard Bearer did not ask only for a repudiation of the one element of universalism, but also for “some thorough-going ‘Reformed Comment and Opinion’ about the entire miserably modernistic article.”

In the third place, also Daane (and the editorial staff for whom he is the spokesman) fails to state that this was an instance of rank universalism, and therefore fails wholly to repudiate the error. He speaks of “this apparent expression of universalism.” I say: Not true; the universalism isobvious and literal. He speaks of “one possible implication of Ellwood’s statement, that is, that all men will be saved.” I say again: Not true! It is neither an implication nor a possible implication. The statement is as plain as the sun in the heavens. It has only one possible meaning for anyone who can read the English language. It is as brazenly and literally and totally universalistic as possible. Just read it again for testing purposes: “. . . every human being that ever lived . . . will be revealed as transformed and charged with the glory of God.” I ask: Why does Dr. Daane hedge?

In the fourth place, Daane evinces absolutely no sensitivity for the truth of the Word of God and of our confessions and no sense of the horribleness of denying that truth and teaching men to do so when, in the second part of his article, he minimizes Ellwood’s heresy still further, and, by comparison with Protestant Reformed theology, makes it come out smelling sweet as a rose. Writes he:

Ellwood’s “universalism” is an overextension of the grace of God, a version of “the triumph of grace.” It is, therefore, at worst heretical, heresy by definition being a distortion of a Christian truth. But Protestant Reformed theology, as this article clearly demonstrates (reference is to Rev. J. A. Heys’s “A Perfect Beginning,” in our October 15 issue, HCH), makes sin, indeed every moment of history, “perfect” and is, therefore, a universalism more demonic than heretical. It makes the fall as perfect as God’s creation, for each is said to be equally useful to “God’s purpose of uniting all things in Christ,” The clue to Ellwood’s universalism lies in God’s grace; the clue to Protestant Reformed theology’s universalism lies in sin. If one had to choose, it were better to choose Ellwood’s kind of universalism than that of Protestant Reformed theology, for God is on the side of grace, and with his whole being in creation and redemption and every moment of history against sin.

Again, we shall comment on Daane’s main thesis in this part of his article later.

At present we want to point out his insensitivity to the Reformed faith, the truth of God’s grace.

Does not Daane understand at all that universalism is not an overextension of the grace of God, and surely not a version of “the triumph of grace,” but a denial? Does he not realize that universalism strikes at the very heart of the truth of God’s grace: sovereign predestination? Does he not realize that a Reformed man ought to cringe at the very thought of universalism? Is he not horrified that he and his fellow Journal editors became co-responsible for spreading abroad such a wicked denial of the beautiful truth of sovereign, particular grace? Does he not have the grace to repudiate this wicked he wholeheartedly and forthrightly and with an expression of sorrow and repentance?

When one takes all this into account, he can only be left with the impression that Daane’s repudiation is at best partial, and at worst not genuine.

And this impression can only be confirmed when Daane launches his vitriolic and hateful attack on Protestant Reformed theology, once he has gotten the technicality of repudiating Ellwood’s universalism out of the way. To say the least, it surely is no sign of genuine repentance when one immediately turns about and points an accusing finger at someone else, to say, “But your sin is even worse than mine!” But this is what Daane does, and that, too, in a totally unjustifiable way.

It would seem that Ellwood must be insulted by this kind of partial repudiation and half-hearted support.

But a Reformed man, who will surely love and embrace the truth of sovereign, particular grace, can only be offended by this style of repudiation.

And Almighty God? This is an abomination to Him!

And He is the Judge! 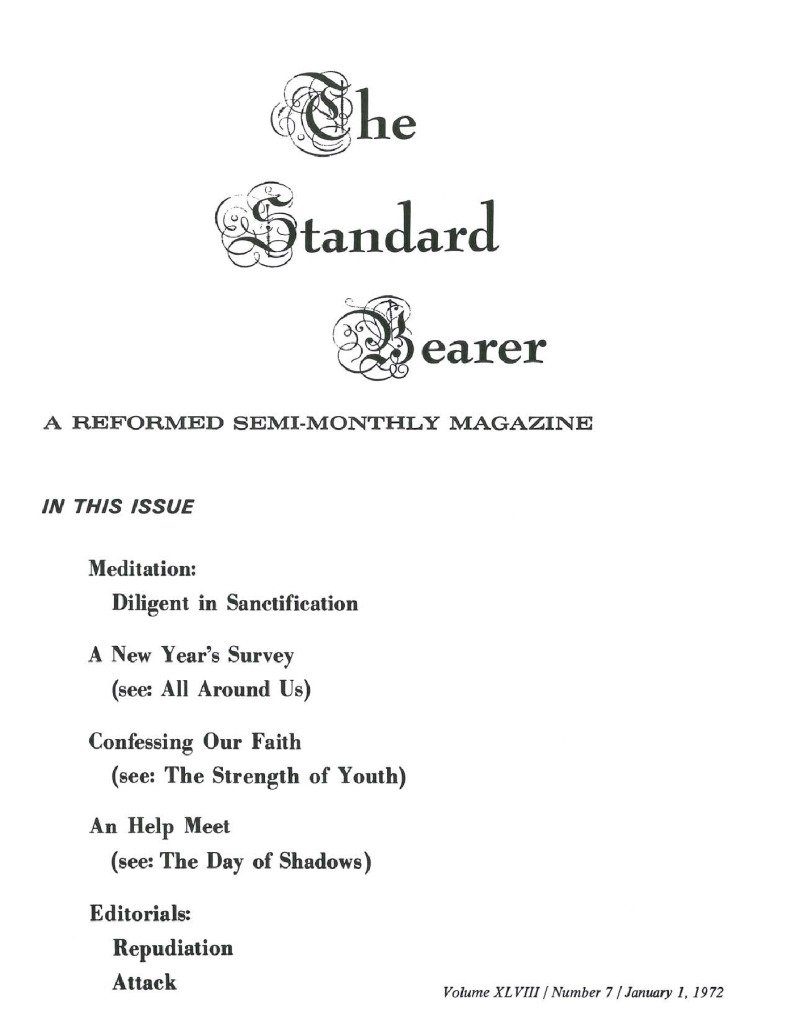