Reproving the world of sin: The practice of elenctics

In the wilderness of Judea, John the Baptist began to preach, saying, Repent (Matt. 3:2).

In some of His last words to the disciples, Jesus promised to send the Holy Spirit who would reprove the world of sin,[1] righteousness, and judgment (John 16:8).

In the Great Commission, Jesus sent us into the world, saying, “Repentance and remission of sins must be preached in my name among all nations, beginning at Jerusalem” (Luke 24:47).

O man of this world, what have you done with God? Last time we considered that profound question of elenctics that the believer puts to the unbeliever. That question seems to bubble up inevitably in the soul of the child of God as he or she lives in the midst of this wick­ed and perverse world. As we observe a sexual revolu­tion rolling over the world like a horrific, earthshattering tsunami; as we hear about a new law permitting the most extreme and nauseating forms of abortion; as we witness a stunning increase in iniquity in all spheres of life, from marriage to science and from entertainment to politics, we find ourselves crying out, “O man of this world, what are you doing with God?”

But the question arises too, or ought to arise, when we meet a man who is lost in the darkness of heathenism: offering incense to dead ancestors, bowing to images of Buddha, groveling before the myriad of Hindu gods, prostrating himself before Allah, or invoking the mother of Christ in prayer. Or when we face a man who imagines that God created the world long ago but has had nothing to do with it ever since; or that God is not a real person but some kind of mystical force sub­sisting in the world; or that there is no God. The ques­tion surfaces too when we hear the man of this world take the name of our God in vain or the woman of this world boast about her sexual exploits with a coworker. But it ought to arise too when we encounter any unbe­liever, even the friendly neighbor who does not feel the need for God in his life.

O man, you know about the true and living God, for God hath showed Himself to you in the things that are made! But what have you done with Him?

That question of elenctics must be followed by the practice. For God in Christ has loved, chosen, and redeemed us to be His witnesses to the world. He has given us to know and believe and understand that He is God, before Him there was no God, neither shall there be after Him. He, even He, is the Lord; and beside Him there is no Savior (Is. 43:10–11).

What, then, is this practice of elenctics?

Reproving the world of sin. The Greek word elengchein, which appears many times in the New Testament, means to reprove, rebuke, convince, or convict. The pas­tor rebukes those who sin and reproves the congregation in his preaching (1 Tim. 5:20; 2 Tim. 4:2); the bishop convinces gainsayers by sound doctrine (Titus 1:9); one brother tells another brother his fault in private (Matt. 18:15); believers reprove the unfruitful works of darkness by the light (Eph. 5:11–13). But ultimately, God alone can perform this act, though He uses us. “When he is come,” Jesus said about the Holy Spirit, “he will reprove the world of sin…” (John 16:8).

The practice of elenctics, in the context of missions and witnessing, is the act of reproving the man of this world for his sin of idolatry, showing him the error of his heathen religion, and calling him to repentance. The spirit of our age is against this. It is the spirit of religious tolerance. I suppose you have seen the bumper sticker with symbols of major religions and the single word “Coexist.” I remember working with a man at a summer landscaping job (a very easygoing man, I might add), who told me that he is against mission work in foreign places like Africa. He thought we should not be going out into the world trying to convert people to Christianity. We should certainly not reprove them of sin. Rather, we should celebrate their religions and worldviews. We should take delight in their customs and look for the beauty in them. We should all coexist and tolerate each other in this world. We should not be so proud to think that we are right when it comes to religion. We should humbly admit that we do not know what is true and false when it comes to religion. I think he may have even admitted that he was an agnostic. That is the spirit of our age, especially in the western world. But we must swim hard against that current, because the task of elenctics is an essential element of our mission as the church of Jesus Christ in this world.

Jesus calls us to reprove the world of sin, to preach repentance and remission of sins in His name among all nations!

Two missionaries of our Lord were faithful to this calling long ago when they came to a town full of heathen men and women. While preaching the gospel to the local pagans, one of the missionaries saw a man who was a cripple from birth. He performed a miracle of healing, saying, “Stand up on your feet.” The local people saw the wonder and shouted in their local tongue, “The gods are come down to us in the likeness of men!” The local priest took bulls and garlands to the gates of the city to prepare a sacrifice to the missionaries! O man, what are you doing with God? You hold the truth in unrighteousness and worship the creature more than the Creator! The missionaries ran to the people and earnestly reproved them, “Sirs, why are you doing these things? We are mere men just like you! We preach that you should turn from these vanities to the living God who made the heaven, the earth, and the seas; who for­merly let the nations walk in their own ways; but who never left Himself without a witness, for He did good, sent rain from heaven, and filled our hearts with food and gladness.” That elenctic message was delivered by Paul and Barnabas in the city of Lystra (Acts 14:8–18).

The practice of elenctics is to reprove the world of sin. According to J. H. Bavinck, who served as a Dutch Re­formed missionary in Indonesia in the 1930s, elenctics is “the conviction and unmasking of sin and the call to responsibility.”[2] That is no quick and easy task. We must not, ordinarily, imagine that we can just approach the man of this world, tell him to repent, and go on our mer­ry way. For the act of reproving the world often involves long and patient work on the part of the missionary and witness of Jesus Christ. It is the task of pulling down the strongholds of false religion and casting down imagina­tions and every high thing that exalts itself against the knowledge of God. It is seeking to destroy the wisdom of the wise and bring to nothing the understanding of the prudent. It is refuting the profane and vain babblings of man and the oppositions of science falsely so called, the philosophy and vain deceit that are after the rudiments of the world, and not after Christ.

The practice of elenctics is bound up with missions. Go into all the world and teach all nations. Allow me to make some distinctions. For there is a task of defending the truth of the Word of God as a warrior of Zion against the flaming arrows of the enemy who attack the fortress of the church from the outside. We call that apologetics. There is also a task of refuting by sound doctrine the gainsayers who rise up within the walls of the fortress, whose mouths must be stopped, lest the people of God be bewitched by those who pervert the gospel of Christ. This we call polemics. Then there is this task of going outside the walls into enemy territory, confronting the dweller in darkness face to face, and reproving him of sin, in the earnest desire of pulling him out of the fire (Jude 23). This is the task of elenctics. It is part of the work of the missionary and the witness of every believer.

When Paul stood before Felix, the Roman governor in Caesarea, he spoke to him “concerning the faith in Christ. And as he reasoned of righteousness, temperance, and judgment to come, Felix trembled” (Acts 24:24–25). Paul always took the opportunity to speak concerning the faith in Christ, the precious good news that Jesus died and rose again according to the Scrip­tures, and that those who believe in Him, by the grace of God, will be saved. But Paul did not hesitate at the same time to reason of righteousness, temperance, and judgment to come. He reproved Felix of sin and warned him that a day will come when he will be the one stand­ing before the Judge of the living and the dead. And Felix trembled.

But Paul always had a missionary motive.

Later he stood before Herod Agrippa. He asked the king if he believed that Jesus was indeed the Christ promised in the Scriptures. Agrippa replied that he was almost persuaded to be a Christian. Whereupon Paul expressed the missionary motive in his heart, “I would to God, that not only thou, but also all that hear me this day, were both almost, and altogether such as I am, except these bonds” (Acts 26:29).

Jonah, on the other hand, did not want to go to Nineveh to reprove them of their evil ways. Only when God sent a mighty tempest and brought a great fish to swallow him and carry him in its belly for three days and three nights was Jonah willing to preach repentance to Nineveh. God used his preaching too, in spite of his lack of missionary motive, to spare that great city wherein were more than six-score thousand persons who could not discern between their right hand and their left hand, and also much cattle.

The motive of elenctics ought not be to win an argu­ment with an unbeliever; not to show the absurdity of his heathenism; not to make ourselves feel good about ourselves; not merely to do what we know we must do. But the motive of elenctics is always, if it is the will of God, the repentance and salvation of the man of the world. This can only be done by the believer who not only believes in the Lord with all his heart, but whose heart also throbs with desire for the salvation of the elect who are still outside the walls of the city of God.

The Holy Spirit will reprove the world of sin and save the elect of God using believers who thrill to sing these words of Psalter #259, a versification of Psalm 96:

Till through the nations His name is revered;

Praise and exalt Him for He is almighty,

God over all let the Lord be feared (stanza 2).

Vain are the heathen gods, idols and helpless;

God made the heav’ns, and His glory they tell;

Honor and majesty shine out before Him,

Beauty and strength in His temple dwell (stanza 3).

Earth is established as He did decree;

Righteous and just is the King of the nations,

Judging the people with equity (stanza 5).

But how exactly should I do elenctics?

How do I unmask the sin of the man of this world, convince him of that sin, and reprove him for that sin?

Let’s come back to that next time.

1  The word elenctics comes from the Greek word elengchein which means “to reprove, rebuke, or refute.” 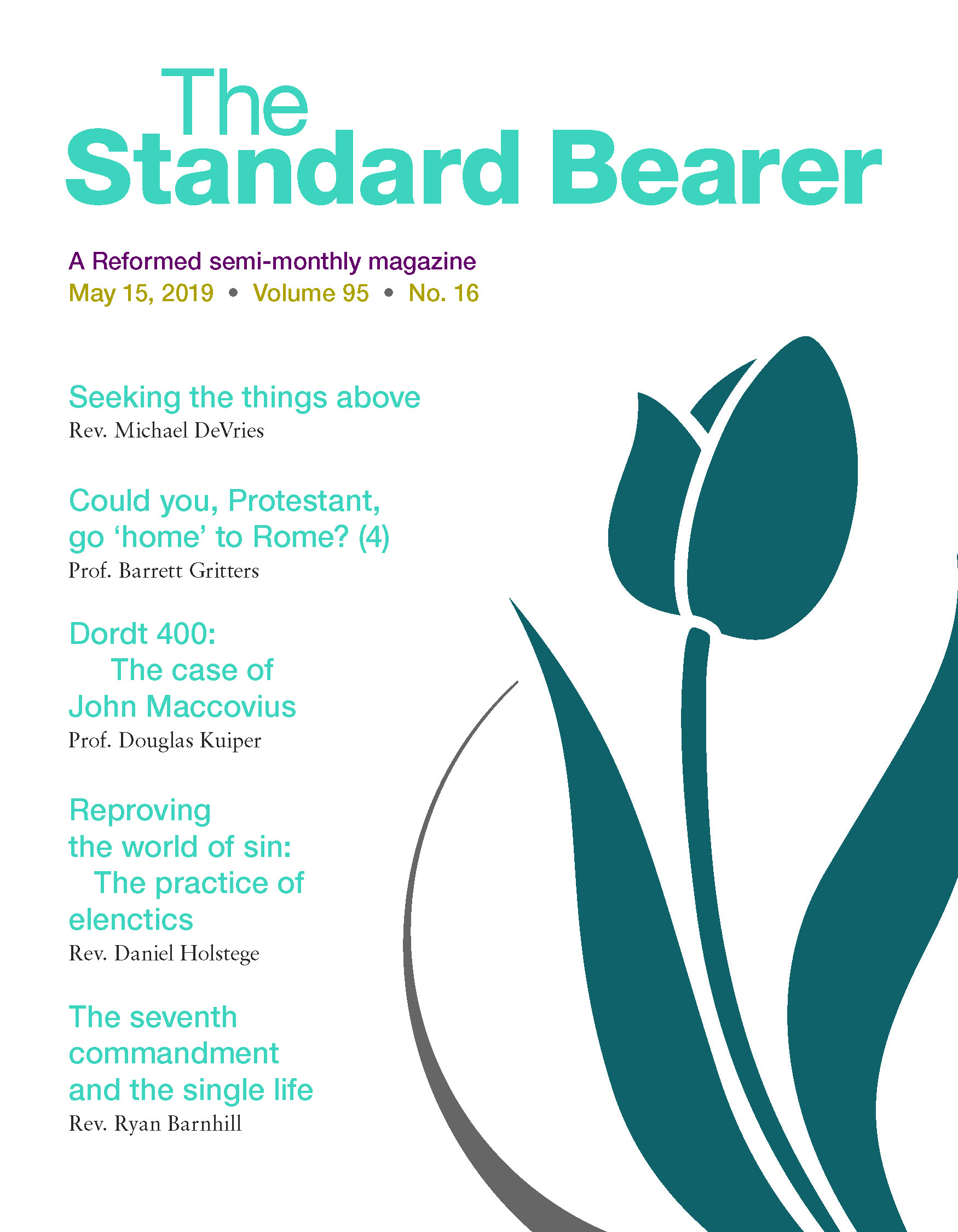