The Synod of the Protestant Reformed Churches convened in the parlors of the Fuller Ave. Church, beginning its first session Wednesday morning, June 7.

On Tuesday evening, Rev. G. Vos, of Edgerton, Minn., the President of the Synod of 1943, preached the pre-synodical sermon, taking as his text Eph. 5:1, 2: Be ye therefore followers of God, as dear children, and walk in love, as Christ also has loved us, and hath given Himself for us, an offering and a sacrifice to God for a sweet smell­ing savor.

On Wednesday morning Rev. Vos led in the opening exercise of Synod. After singing from the Psalter, he read a portion of Phil. 2 and led in prayer.

Then followed the election of the Moderamen, with the result that: Rev. A. Cammenga was elected president: Rev. R. Veldman, vice-president; Rev. B. Kok, secretary; and Rev. A. Petter, assistant secretary.

The newly elected president reads the Public Declaration while the delegates stand thus expressing their agreement.

The president speaks a word of wel­come and requests the wholehearted co­operation of all the members of Synod.

Sessions were held only in the morn­ing and afternoon, so that the com­mittees of pre-advice would have time to do their work in the evening. Three committees were appointed to make a careful study of all material that was brought to Synod and were asked to serve Synod with advice in regard to the matters that were placed in their hands.

In this sermon student Van Weelden gave evidence of the fact that he was able to bring out the truth of the text in a clear and logical manner.

The examination in Practica was con­ducted by Rev. G. Vos.

After the conclusion of the examina­tion, Synod met in closed session and by a unanimous ballot decided to make student J. Van Weelden a Candidate for the Ministry of the Word and Sac­raments in our Churches. Student Van Weelden was then called in and inform­ed by the president that Synod had de­clared him Candidate for the Ministry in Our Churches. In a very appro­priate and fitting way he addresses, a few remarks to the Candidate. The delegates then all rise and sing the Holland Doxology, “Dat’s Heeren zegen op u daal,” after which the president leads in prayer.

And so we have another prospective minister in our Protestant Reformed Churches, while two new students, Mr. Homer Hoeksema and Mr. Edward Knott, have been received into our School. These new students, with the other students we have, will begin their work at our school immediately. According to government regulations all Seminaries will continue their regular courses during the summer months: and so, too, at our school the regular course of studies will be main­tained during the summer.

The report of the Auditing Committee showed that our treasurer has a good balance in nearly all of his accounts. Due to this fact, the treasurer as well as the committee of pre-advice recommend­ed to invest $10,000.00 of this money in government bonds. This advice was adopted by Synod.

Because of the surplus in the Mission Fund Synod decided to reduce the assess­ment for this fund to $1.00 per family. While on the other hand Synod decided to increase the assessment for our Theo­logical School and for our needy churches at the rate of $1.50 per family, because the running expense of our School has increased, and the subsidy for some of our needy Churches was increased also.

In re the Church Order, Synod adopted the translation recommended by the com­mittee and decided to name it, “The Church Order of the Protestant Reformed Churches.” The By-Laws that were translated by this committee were also adopted by Synod with a few minor changes.

Synod further appointed a committee who shall prepare for printing the adopt­ed Church Order and By-Laws, and the Constitutions of the various committees, which they shall present to the following Synod together with the approximate cost of printing.

The appeal of Hudsonville’s Consistory was rejected because Synod denied that the transgression against the Church Order was made necessary by any pos­sible condition in Byron Center.

In re the matter of Psalter revision Synod decided to appoint a committee to purge the Psalter of doctrinal errors and if possible to make recommendation for some revision.

Fuller Ave. is the meeting place desig­nated for our next Synod, and so too, Fuller Ave. will be the calling Church for the Synod of 1945.

I have just given a brief resume of what was done at our last Synod. Much more could be added of course. If you would like to know more in detail what was done at Synod (and you certainly should be interested in what our Church­es do and decide) you will find all this information in the Acts of our Synod which shall soon appear in print and which can be purchased for 25 cents per copy. 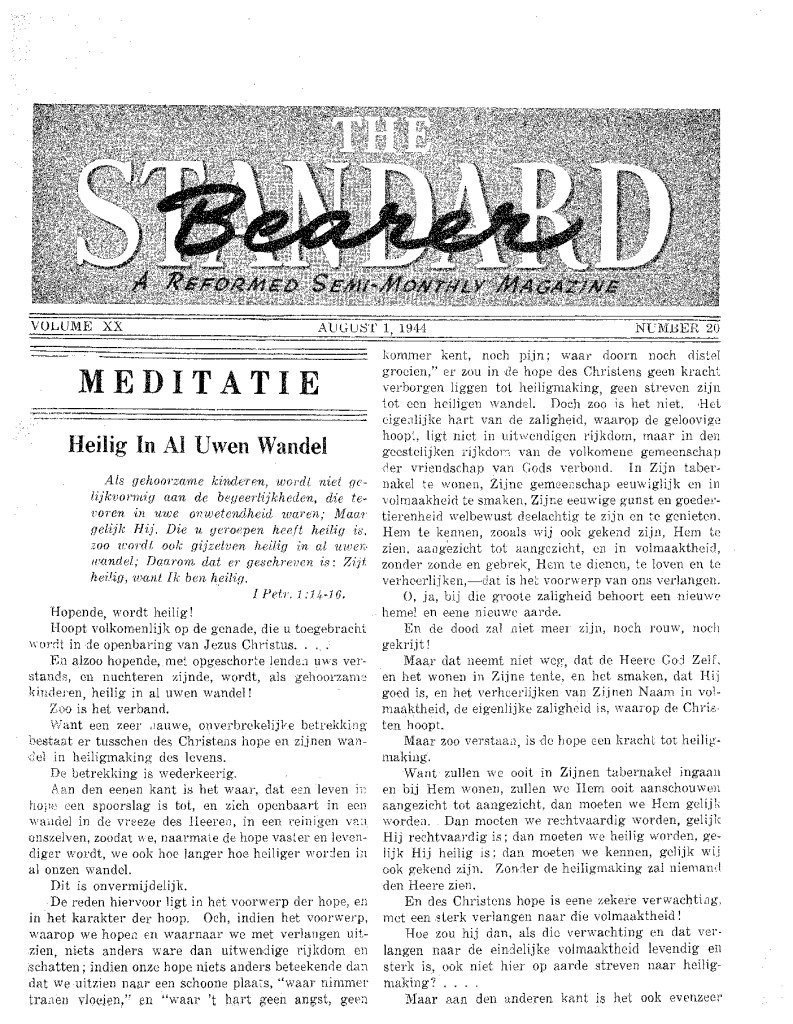