Report of Conference with DeWolf Group

Report of Conference with DeWolf Group

The report, however, makes clear that by “Protestant Reformed Churches” is meant the DeWolf group, i.e., the group of churches that separated themselves from us following the heresy of the Rev. DeWolf.

“The following excerpts from the report of the committee to confer with the Protestant Reformed Churches are of interest:

‘In response to a communication from the Protestant Reformed Churches (Rev. H. DeWolf group) requesting our Synod to appoint a broad committee (4 ministers and 3 elders) to discuss freely the differences and similarities between our churches, the Synod of 1957 appointed Rev. H. Baker, Rev. J. Weidenaar, Professor M. Monsma, Rev. A. Persenaire; and the Elders H. Bratt, C. Van Malsen, and C. Zylstra.

‘We are happy to report that all the meetings were characterized by friendly, fraternal, free, and frank discussions. It was agreed by both committees that during the entire year nothing was to be reported either in their or our church periodicals concerning the content of our deliberations. We felt that our discussions together should be an ongoing process and that publication of what this or that one had uttered on this or that point would be premature and might jeopardize the intent of the discussions, namely ‘to work for the unity of the church of Christ.’

‘There are basic similarities between the Christian Reformed Church and the Protestant Reformed Churches. Obviously we met as brethren in the Lord. We enjoyed our fellowship together and the discussion to such a degree that we can honestly say that we looked forward eagerly to our scheduled meetings. We felt increasingly that the barrier which has kept us apart for more than thirty years was in the process of being budged to the mutual gratification and delight of both groups.’

‘In order to achieve genuine unity we felt it obligatory to face squarely the differences which do exist between us. Only in this way is there hope of removing the difficulties, overcoming the obstacles, and leveling the barriers which keep us apart.

‘At the same time the Protestant Reformed brethren conceded that they might have misinterpreted the Three Points. In our interpretation of the Three Points we were able to remove misunderstandings and give assurance that they did not undermine the basic doctrines to which we both are committed. The possibility of a “vervangingsformule” was canvassed but it became increasingly clear that we cannot turn back the clock nor abandon the Three Points of 1924.

‘On the other hand we did feel that, without in the least rejecting the well-meant offer of salvation, which we believe’ 6 be both Biblical and Confessional, the placement of this item in the context of the favorable attitude of God to all men generally could and did give rise to a measure of confusion.

‘These are instances of some of the matters which engaged our attention. We believe that certain difficulties have been removed and that an atmosphere has been created in which further discussion will indeed prove fruitful.’

“Synod decided to continue the committee which is to confer further with the Protestant Reformed Churches in order that the gains achieved may be preserved and furthered in the fond hope that we all may be one in the Lord. It was also decided to request the committee to consider giving some publicity to the discussions.”

We knew, of course, of synod’s favorable response to the request for a conference by the DeWolf group, and that a committee was appointed to confer with the DeWolf group, but who they were was a secret to outsiders. Now we know who they were who met with a view to seeking unity of the two groups. We are inclined to say something about the constituency of these committees, but will refrain for the present.

It is indeed interesting to note why their conferences were held in secret, and to note also that the synod apparently did not wholeheartedly approve of this tactic. Though synod favored the continuance of the conferences, synod also requested the committee “to consider giving some publicity to the discussions.” One can hardly refrain from questioning the reason given for this secrecy. Of whom were the committees afraid? That some one on either committee might speak prematurely on a given point we could conceive as possible. But how would this jeopardize the intent of the discussions? Were those on the Christian Reformed committee aware perhaps that there might be some Christian Reformed members, ministers included, who are not interested at all in taking under their wing the DeWolf group? We have reason to believe this has a strong possibility. Or, was the DeWolf committee afraid perhaps that they have members who would rather return to us than subject themselves to the Three Points of Common Grace which they have condemned since 1924? Or, were the two committees as a whole afraid perhaps that if we got a hold of their minutes or knew of what this one said on this or that point, that we might make the whole thing look ridiculous before the eyes of the public and thus jeopardize the intent of the discussions to seek unity of the two groups? To say the least, the reasoning of the conference is not beyond questioning. The amusing factor in all this is the apparent fact that both sides of the conference were so intent on getting together that they would brook no interruptions.

What the basic similarities between the Christian Reformed and Protestant Reformed Churches of the DeWolf group were the report does not state. What is emphasized was the very friendly and brotherly atmosphere they enjoyed at their meetings. The impression is left that they were so friendly and brotherly that before any differences were discussed they felt that they were already one.

When we read the report of the differences discussed at the conferences, we concluded that they were satisfactorily removed. The Christian Reformed committee answered all the objections of the DeWolf committee. The Three Points do not jeopardize the Biblical and Confessional doctrines of the eternal decrees, the antithesis and irresistible grace. They have not been elevated to the position of a Dogma or fourth creed on Common Grace. They do not as a Dogma reduce the Christian Reformed Church to a Sect. In fact the conference proved from the Acts of 1924 that the synod in 1924 did not intend at all to make a Dogma out of Common Grace. And the DeWolf committee willingly conceded that they might have misinterpreted the Three Points, while the Christian Reformed committee showed them that they did. Thus the conclusion must be that though the Three Points are no established Dogma, they must nevertheless never be abandoned. Perhaps they could be stated a little differently so that no one could again accuse the Christian Reformed Church of embracing Arminianism in the First Point. For it was admitted that “the placement of the well-meant offer of salvation in the context of the favorable attitude of God to all men generally could and did give rise to a measure of confusion.” But even this concession should satisfy the DeWolf group. So we conclude finally that there really is no need for further conferences. That the synod nevertheless decided that the conferences continue is perhaps due to the fact that final arrangements must be made to officially take the DeWolf group as a whole into the Christian Reformed Church. 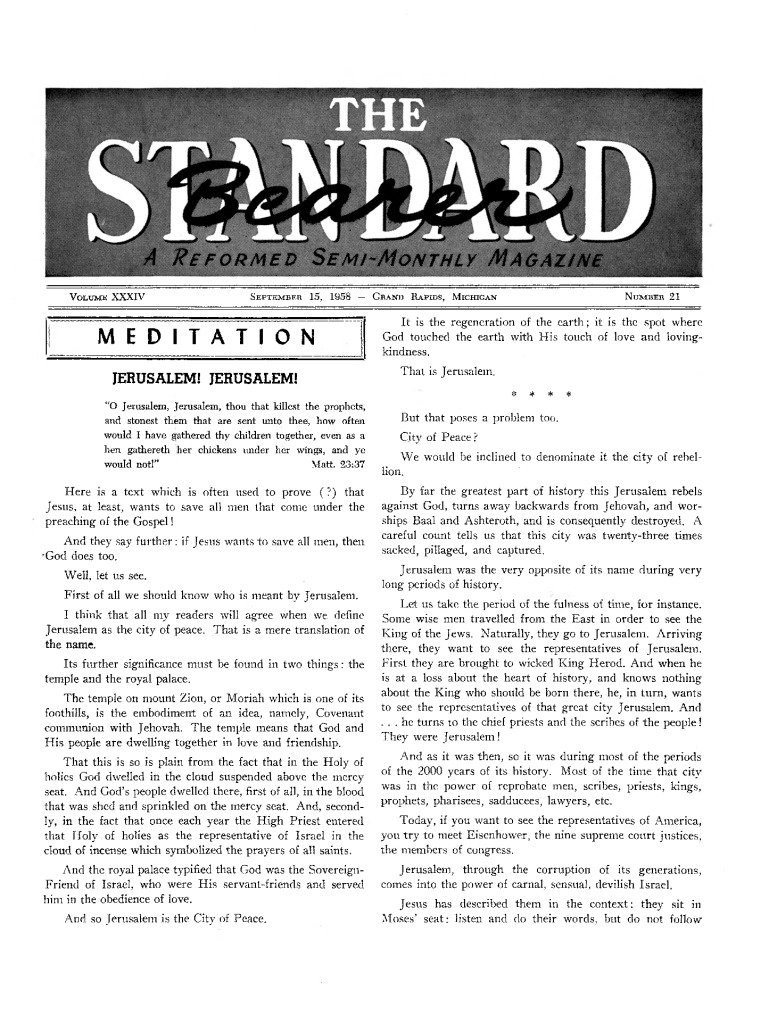