Classis West of the Protestant Reformed Churches met in Doon, Iowa on February 6. The Classis met a month earlier than the date originally scheduled, in order to examine the then Cand. M. Hoeksema, as was requested by the Ebenezer Church of Forbes, North Dakota. Nine ministers and thirteen elders represented the eleven churches of Classis West. Three ministers from the East, Rev. C. Hanko, Rev. J. Heys, and Rev. G. Van Baren, attended Classis as delegates ad examina. Rev. R. Moore ably presided over this Classis.

The main work of Classis was the examination of Mark Hoeksema, who had accepted the call to our Forbes Church. Cand. Hoeksema preached the required sermon, before the delegates of Classis, at a special worship service of the Doon congregation on the evening before Classis. The sermon was on Romans 1:16. In accordance with the requirements of the decisions appended to Article 4 of the Church Order, Classis examined the candidate in dogmatics, in his practical qualifications, in his knowledge of Holy Scripture, in his knowledge of the confessions, and in controversy, as well as in his ability to preach. With the concurring advice of the delegates ad examina, Classis approved the examination and advised Forbes to proceed with Cand. Hoeksema’s ordination. Classis expressed its heartfelt thanks to God for the gift of another pastor to His Church and for the gift of a seminary where young men are trained to be capable, faithful undershepherds of Christ. May God bless this young servant and make his ministry fruitful.

Classis also heard reports from its Classical Committee, its Taped Sermon Committee, the Stated Clerk, the Church Visitors, and the Delegates ad examina.

Attached to the Stated Clerk’s report was a letter to Classis from Mr. L. Regnerus, clerk of the consistory of the Oak Lawn Protestant Reformed Church. This letter informed Classis that all of the properties of Oak Lawn had been sold. The assets of the church, in the amount of $37,786.19, were divided equally among three funds in the Protestant Reformed denomination: the R.F.P.A., Domestic Missions, and the Emeritus Fund. The letter also stated that the necessary legal steps had been taken to disband the congregation and dissolve the corporation. Classis approved Oak Lawn’s distribution of its money, and sent the information to Synod.

Classis granted subsidy to Edgerton, Isabel, Loveland, Lynden, Pella, and Randolph. Forbes is to send its request to Synod through the Classical Committee of Classis West.

Classis decided to revise its classical diploma in conformity with the revision recently made by Classis East.

In its evening session, Classis conducted elections. The results were the following. Rev. J. Kortering was elected to the Classical Committee.

The next meeting of Classis will be held in Randolph, Wisconsin on September 4, 1974, the Lord willing.

On Tuesday afternoon, before Classis, the delegates and officebearers from the area attended a conference on the office of the deacon. Rev. R. Moore gave a paper on the subject of the offerings taken in our worship service. An animated discussion followed. The men decided to pursue the subject of the diaconate at a later conference. It was suggested that the conference be longer, perhaps two days, and that deacons be invited to attend. How such arrangements can be made remains a mystery as yet; suggestions are welcome. Rev. W. Bekkering was appointed to serve with Rev. Engelsma as the committee on conferences. 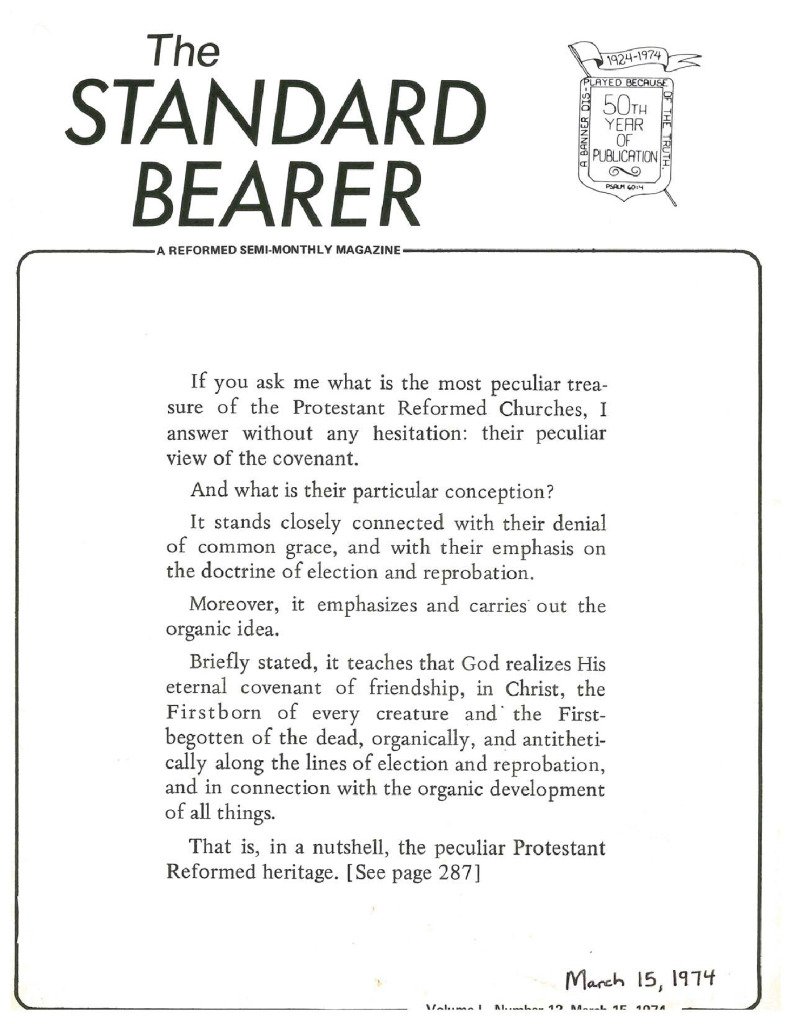