Classis West met in Hull, Iowa on March 2 and 3 in the midst of a snowstorm reminiscent of the famed Hull blizzard of March, 1965. More than a foot of snow fell on Wednesday with the result that the delegates were unable to get to their lodging in the country that evening. Since all travel by car was impossible even within the town of Hull, delegates were transported to homes in town by snowmobile. It was an amusing sight: delegates perched warily on the back of the suspicious machine, one arm holding the driver for dear life, the other arm grasping a suitcase, and a hat left to fend for itself.

The hostility of the elements was more than matched by the warm hospitality of the Hull congregation, some of whom put up five or six delegates on Wednesday evening. Indeed, in the good providence of our God, the One Who “saith to the snow, Be thou on the earth” (Job 37:6), the storm served to increase the fellowship of the delegates and the brothers and sisters of northwest Iowa.

Eleven ministers and fifteen elders represented the churches of the West. Missing after some sixteen years in the Classis was Rev. B. Woudenberg, who had accepted a call to Classis East. Classis bade him an affectionate farewell. Classis welcomed back, after a stint as home missionary, Rev. D. Kuiper, now pastor of the Lynden, Washington congregation. Four elders were present at Classis for the first time: A. Brummel (Edgerton); J. Sugg (Houston); B. Van Der Molen (Pella); and R. Wimberly (Houston).

Rev. M. Kamps, president of the previous Classis, led Classis in opening devotions. He expounded I Thess. 5:1-4. Rev. J. Kortering served as president of this Classis.

Classis witnessed the birth of a congregation and the death of a congregation. The congregation newly born is Houston, Texas. Classis received a letter from the Mission Committee informing Classis of their decision to organize Houston and of their advice that Houston affiliate with Classis West. The consistory of Houston also had a letter at Classis informing Classis that they were organized on February 15, 1977 and requesting Classis to receive the congregation in Classis West and to seat the elders sent to Classis. Classis granted the request and received Houston’s credentials.

The congregation that disbanded was Forbes, North Dakota. The agenda of Classis included Forbes’ request that Classis approve their decision to dissolve the congregation in Forbes. Since their acceptance into the Protestant Reformed denomination in 1960, their membership has declined. Their energetic efforts at church extension work. in the past few years under the leadership of their pastor, Rev. M. Hoeksema, had no positive fruit in church growth. Classis approved their disbanding. The sadness over this action was tempered by the knowledge that the saints in Forbes plan to move to other localities, so that they can join other Protestant Reformed churches. The actual disbanding of the church is scheduled for this summer; until then, the church will continue to meet for worship. Classis gave Forbes classical appointments until June.

Classis treated several overtures. It sent to Synod with approval of Classis an overture from Lynden that Synod improve our liturgy concerning public confession of faith. Lynden finds our present questions and answers “unnecessarily brief and barren.” Classis also sent to Synod with its approval an overture from Hull to change the By-laws of Synod, so that the Board of Trustees are empowered to appoint temporary replacements to synodical committees under certain conditions. Classis rejected an overture to change the time of Classis to the first Wednesday of April and October, spring blizzards notwithstanding.

A protest by a brother against a former decision of Classis was carefully considered.

Classis denied the request of a consistory for advice to proceed with the erasure of a baptized member, on the ground that the consistory did not furnish the Classis with sufficient grounds.

Six churches requested subsidy in the amount of $33,420. Classis approved the requests and sent them on to Synod. In addition, Houston made known its need for subsidy and was instructed to make a request to the Classical Committee.

The results of the various elections were:

Classis adjourned about noon on Thursday, having accepted the invitation of the Pella, Iowa congregation to hold the next meeting of Classis in Pella on September 7, the Lord willing.

On the Tuesday afternoon and evening before Classis, a large group of men, delegates and visitors, met in an Ofticebearers’ Conference. The topic was “Baptism on the Mission Field.” The men used the report of Synod’s study committee as an introduction to the subject and springboard for discussion. Rev. J. Slopsema chaired the meeting. There was an open, lively, and brotherly discussion of this interesting subject.

These conferences, a regular feature when Classis West comes together, prove to be good instruction and good communion.

The committee asks your suggestions regarding a topic for a conference in Pella. Send any suggestion to Rev. W. Bekkering. 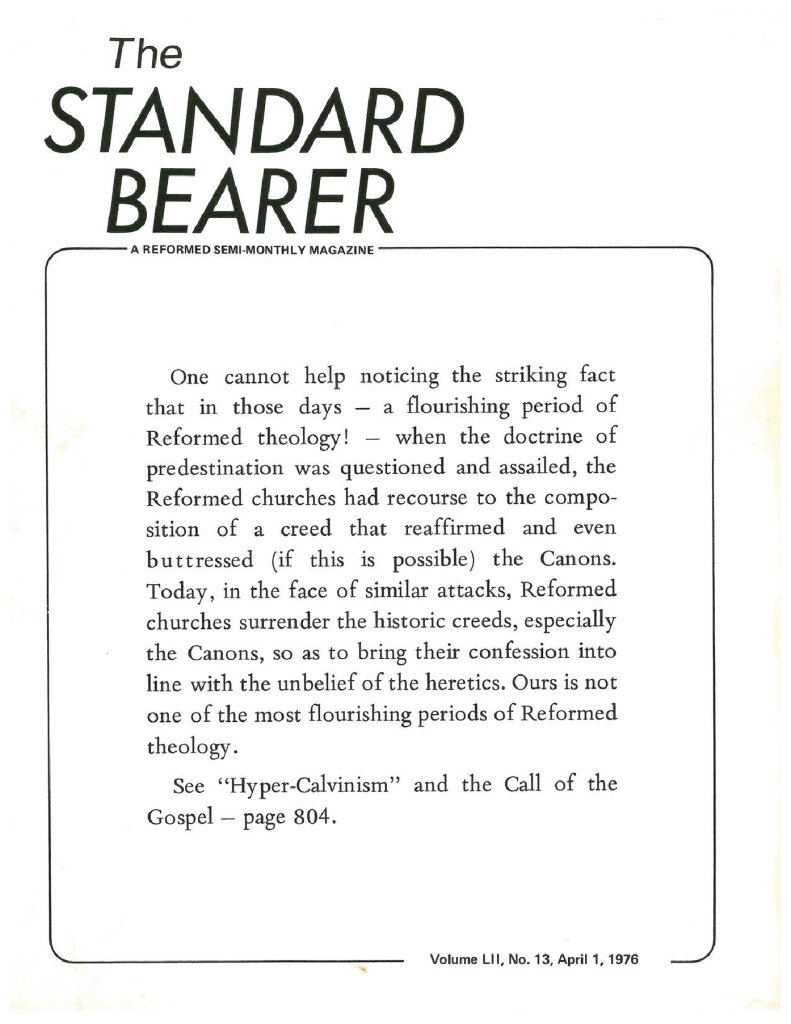