Classis West convened March 4, 2009, in the sanctuary of the First PRC of Edgerton, MN. Rev. M. VanderWal presided over this meeting.

The day prior, the delegates attended an officebearers’ conference on the theme Catechizing Our Youth. In his keynote address, Rev. S. Key pointed out that the Christian church, both in her early years and in the time of the Reformation and since, has placed great emphasis on the need to provide catechetical instruction. Rev. N. Langerak emphasized that this instruction must be both antithetical and relevant to the errors and problems the church faces in the twenty-first century. Mr. James Regnerus gave a PowerPoint presentation that set forth the need for elders to be involved in the instruction of the church’s youth, and gave practical tips for elders to use when they must teach. Rev. D. Overway concluded by reminding us that the goal of catechetical instruction is not head knowledge, but the holiness of our covenant youth.

The highlight of this meeting of Classis was the request of Loveland PRC, with the approval of the Domestic Mission Committee, that Classis approve organizing the Covenant of Grace Protestant Reformed Fellowship in Spokane, WA, into a congregation. Classis gave this approval, and the synodical deputies concurred with Classis’ decision. Loveland PRC was appointed as the committee of classis to implement this decision, and Rev. R. Miersma was appointed moderator of the new congregation. In giving this approval, Classis did not overlook the small size of the group. It did note that the group has enough men who are qualified and sufficiently trained to serve in office—enough even to allow for rotation of officebearers; that there is potential for growth both internally and from the large community around; that there is little or no other Reformed witness in the Spokane area; and that the group has become mature in the Reformed faith and unified in its life as a body of believers.

For a new sister, the family of churches that make up the Protestant Reformed Churches in America can be thankful to God.

Classis also approved the request of Peace PRC to grant emeritation status to Rev. S. Houck. With this decision of classis the synodical deputies also concurred.

Classis declared a protest against decisions of Synod 2008 to be not legally before it, because a protest against the decision of a body must be directed immediately to that same body—in other words, the protestant must bring his protest to Synod 2009, not to classis.

A brother overtures Synod 2009 to change the wording of Article 21 of the Church Order so that it would read: “The consistories shall see to it that there are good Christian schools, be they parental communal schools or parental home schools, in which the parents have their children instructed according to the demands of the covenant.” While protests of the decision of synod are not to come to a meeting of classis, overtures to Synod must come through one’s own consistory and through Classis. Accordingly, the brother had brought the overture to his consistory, which rejected it. The brother then exercised his option of bringing the overture to Classis, which declared the overture legally before it. After careful deliberation, Classis rejected the overture on the ground that the overture lacked clear scriptural and confessional grounds to make a change—something that is necessary when changing a document that has stood the test of time.

In addition to other routine labors, Classis approved subsidy requests for Bethel PRC for 2010 in the amount of $56,000, and for First Edmonton PRC in the amount of $20,376 CN ($16,318 US), and forwarded them to synod. Classis also provided classical appointments for its two vacant churches—Calvary (Hull) and Immanuel (Lacombe). The expenses of this meeting of Classis totaled $11,550.90.

Having accepted the call to serve as missionary to the Philippines, Rev. R. Smit tendered his resignation as stated clerk of the Classis. Rev. Douglas Kuiper was elected to finish Rev. Smit’s term as stated clerk, and Rev. J. Marcus was elected to finish Rev. Kuiper’s term as assistant stated clerk. Anyone desiring to address Classis West should note that this change is effective immediately, and all correspondence must now be sent to Rev. Kuiper.

Our prayer is that God’s name be glorified in the decisions made, and in the effect they have on our members and congregations. 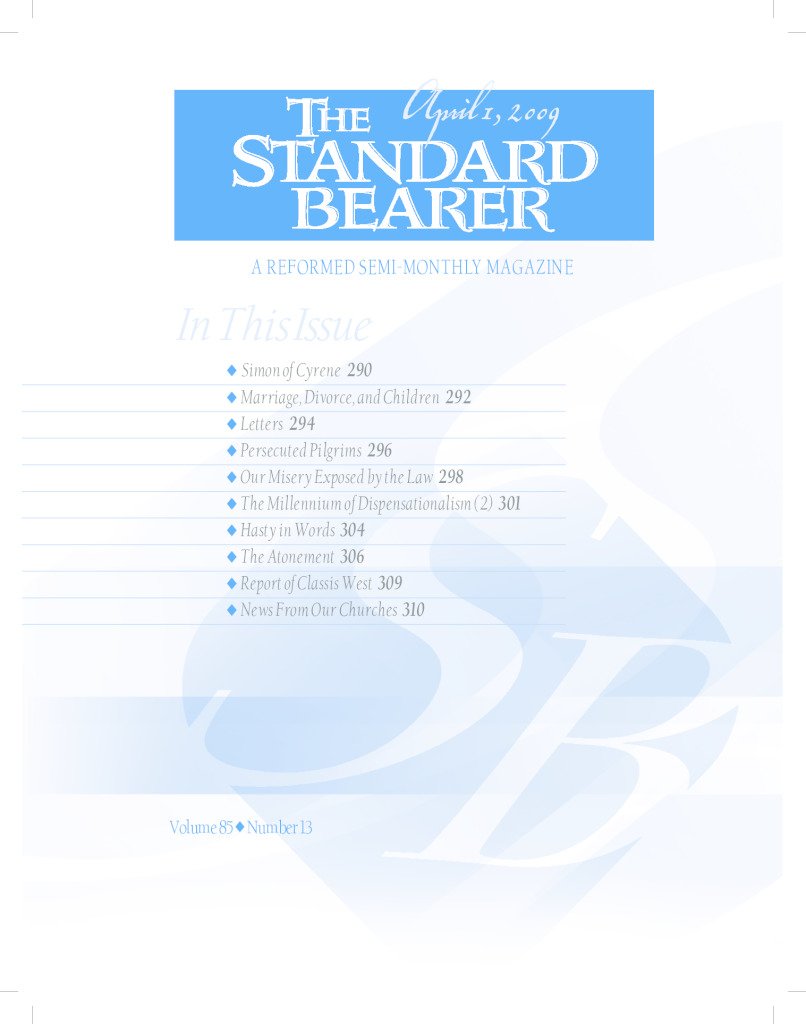