Report of Classis East of the PRCA

At the request of the Consistories of Faith, Grace, and Hope, the Classical Committee of Classis East called for the convening of a meeting today to consider the request of Rev. David Overway to be released from the ministry according to Article 12 of the Church Order.

Rev. Bruinsma led in opening devotions and declared classis properly constituted. Rev. N. Decker, by rota­tion, presided as chairman of the meeting. Because Michigan’s governor signed an executive order banning assemblies of more that 50 people effective at 9:00 a.m. on March 17 until 5:00 p.m. on April 5, a recommen­dation was made to adjourn and treat the items on the agenda at the regular meeting of classis on May 13. The motion failed. Instead classis passed a motion to meet in closed session in order to comply with the governor’s order. The Consistory of Wingham decided not to send delegates due to the possibility that they would not be able to return home or that they would be required to be quarantined upon reentry into Canada.

Classis passed the recommendation to approve the decision of Hope PRC’s Council to ‘grant Rev. Over­way’s request to be released from the ministry according to Article 12 of the Church Order’ on three grounds.

The synodical deputies from the West concurred with this decision. The chairman read appropriate vers­es from I Samuel 7 and encouraged Hope’s Council and Mr. Overway to find comfort in the unfailing help that God gives His people.

Other actions taken by classis include:

b. Approving a classical appointment schedule for five(!) vacant churches: Cornerstone, Hope, Kalama­zoo, Providence, and Unity PRCs. May the Lord send us pastors!

c. Approving the work of the church visitors in the labors they performed helping the Council of Hope PRC.

Classis adjourned around 2:30 p.m. May the Lord use these decisions for the good of those who are direct­ly affected, for good of our denomination, and for His glory. 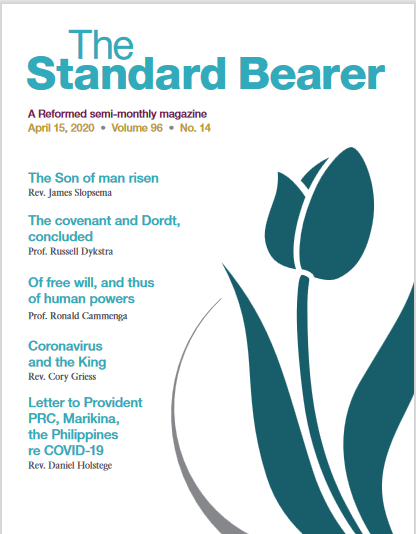