This meeting of Classis was held in Grand Rapids in the parlors of the First Church. Rev. H. De Wolf calls the meeting to order, leads the devotional exercises and presides at this session of Classis.

The credentials reveal that all the churches are represented at this Classis. After the credentials are accepted, the president speaks a few words of welcome especially remembering the delegates from our newly organized church at Chatham.

Rev. R. Veldman is asked to serve as clerk.

The brethren delegated to Classis for the first time sign the Formula of Subscription.

The minutes of the previous meeting of Classis are read and approved.

Advisory vote is given to the visiting ministers and to the Stated Clerk.

Classis decided to appoint a Committee who should investigate the status of the Stated Clerk and determine if possible whether or not he shall be an officebearer. This Committee was also instructed to investigate as to who is entitled to an advisory vote at a classical meeting.

A committee is appointed to arrange a schedule for classical appointments. Later in the day the following schedule was presented by the committee and adopted by Classis:

Classis decides that the Church Visitors shall be given an additional three months to finish their work.

The Consistory of Creston thanks Classis for the Classical appointments granted them during their vacancy.

Hamilton asks for Holland sermons that can be used for reading services. Rev. J. Blankespoor will send them a few that will take care of their immediate needs. And for the future needs a committee is appointed, consisting of Rev. Blankespoor and Rev. Vos, who will gather sermons from the various ministers of the Classis.

A consistory requests advice in re the erasure of a baptized member. After the necessary information is given by the consistory, Classis advises to proceed with the erasure.

A request from Fuller Ave. for clarification of the decisions in re the protest of Mr. Jonker, taken at our last meeting of Classis is placed in the hands of a committee, who shall study this matter and draw up a concept answer. Later in the day the committee came with the following advice:

“We advise Classis to answer the consistory referred to as follows:

1.  It is contrary to established Reformed Church Political procedure for one Classis to clarify the decisions of a former Classis upon a mere request for such clarification. The consistory of the First Church has the same information the Classis has, in the minutes and the archives.

2.  The decisions referred to are considered settled and binding unless it be proved to conflict with the Word of God or with the Articles of the Church Order. See Art. 31, D.K.O.

The questions of Art. 41 of the Church Order are read and answered satisfactorily by the Consistories.

The next meeting of Classis will be held at the First Church of Grand Rapids on the first Wednesday in Oct.

Elder Koster of Chatham briefly addresses Classis for the purpose of expressing the gratitude of Chatham to the Classis for everything that has been done for them.

The concept minutes are read and approved. The Holland Psalm 89:7 is sung. Rev. M. Schipper leads in the closing prayer. 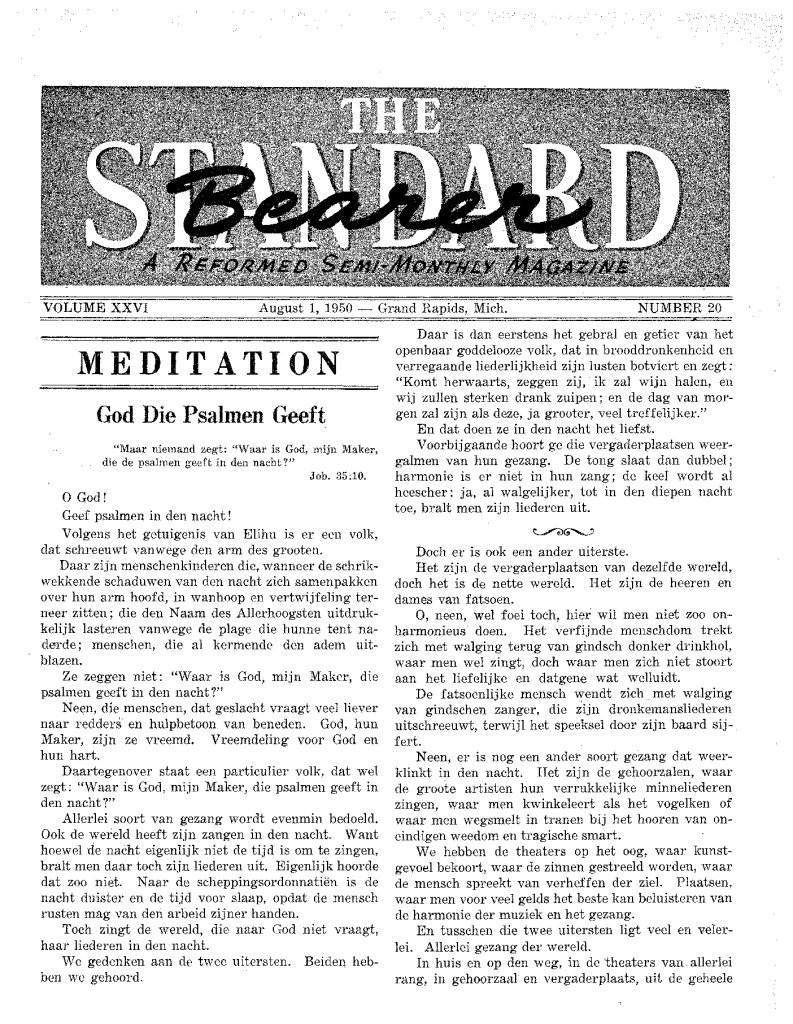