Greetings in the name of the Lord Jesus Christ Who gathers, defends, and preserves His church even unto the ends of the earth. Once again there are many exciting things to tell you about the Lord’s work in His church here in Singapore. He continues to cause His church to grow and prosper in His grace. On January 22 we celebrated the second anniversary of the institution of the church. This was a special Lord’s Day for us beginning with a special worship service where Pastor Lau preached the Word and concluding with an afternoon program of praise and thanks unto the Lord.

On January 29 we once again had the great joy and privilege of administering the sacrament of adult baptism in the church. This was the climax of many months of catechism instruction. Six young new Christians were baptized and another four were added to the church by public confession of their faith. There is a continuing need for holding catechism classes to prepare new people in our midst for baptism and membership in the church. Pastor Lau will be conducting the next session of classes which will begin in another week.

The last two months of 1983 were very busy for us. In the month of November we had the opportunity to be involved in a church camp in Malaysia which was sponsored by the church in Trengganu that we have been baving contact with. We gave a series of messages on the theme “By His Word.” We were also asked to lead a workshop on the Christian family. We are waiting upon the Lord for further direction in our involvement with the saints of God in this church. Last week two brethren from Trengganu visited us.

In December the ERCS had a students camp. This has become an annual affair for the church. Pastor Lau spoke at this camp on the theme, “The Lord Our Shepherd.” Pastor Lau was also invited to speak for a group of young Christians in Singapore who are not affiliated with the ERCS. This group of young Christians had quite a similar origin as the ERCS had.

Probably the most exciting development in our church so far this year is the purchase of a church property. Though the deal has not yet been finalized it is quite certain that it will be closed at the end of March. This place is actually an old pre-war two story terrace house. We hope to be able to convert the bottom story of this house so that it can be used for holding church meetings. The place however is not large enough to hold our present congregation. Normally the worship services are attended by about 180 people. The seating capacity of the new place would not be more than 100. For this and other reasons the church has decided to work towards starting a second congregation. The church is of the opinion that our present congregation is getting so large that fellowship and closeness of the members is declining. Most of all the church desires to expand the work of the preaching of the Reformed Faith in Singapore. It is hoped that by the grace of God this can be significantly expanded by having two congregations. There would be a number of other advantages of having two congregations. The second congregation would be formed, the Lord willing, through splitting our present congregation. This would also relieve the overcrowded conditions at our present meeting place. The second congregation would meet in the newly purchased building. The first congregation could also use this building in the event that it would suddenly have to vacate the present premise (something which is a real possibility since this place is slated for demolition at any time). In the future it is hoped that the church can purchase another old house in a different location in Singapore to house the present congregation. Then we would have two smaller congregations rather than one large one. After many months of searching we have found it impossible to purchase a large building that would be a proper church building which could hold a large congregation. This is especially because of the astronomical cost of real estate in Singapore. At present it seems more feasible to purchase old houses and convert them for use for smaller congregations. We rejoice and give thanks unto the Lord that He has caused the members of the church to give sacrificially and liberally with the result that we now have sufficient funds to purchase the property. There is still however great need for more money to enable the church to do extensive renovation of this place so that it can be used for church meetings. According to plans, our family will be living in the top story of this place. I will be pastoring the newly formed congregation in the beginning, the Lord willing. This arrangement will also help to raise the necessary finances for the place.

We are looking forward to another year of marriages in our midst. Already now we are giving marriage counseling classes to three couples who intend to get married later in the year. As usual we give such pre-marriage counseling for seven weeks to those planning to be married. The families in our church continue to grow as the Lord gives children. In the next couple of months three new babies will be born, D.V. In connection with all of this there is great need to address subjects relating to the Christian family. Plans are to have a three-day seminar on the Christian family some time in May.

The Lord continues to bless and prosper the work at Toa Payoh Mission. We intend to continue this work even after the second congregation has been started. At that time probably both congregations will be supporting this work and both pastors would continue sharing the preaching work there. Beginning next week we shall be having a series of three special gospel messages at the Toa Payoh Mission on the general theme of “Three Great Truths of the Christian Faith.” Later in the month of March Pastor Lau will be preaching a series of special messages relating to the suffering and death and resurrection of the Lord Jesus Christ. All of these messages will be specially adapted for newcomers to the mission who have never before heard the preaching of the gospel. The members of the church are working very hard to publicize these special services in the Toa Payoh area of Singapore.

The church now has six weekly Bible studies at various homes of our members in Singapore. These Bible study groups serve a very good purpose in the church and are well attended. It is possible for our members to attend such a Bible study in the area in which they live and they need not make long journeys in the evenings.

The Lord continues to bless and keep our family. We now have four children in three different Singapore schools. This is all pretty complicated. They also go at all different times of the day. They start leaving the house before 7:00 a.m. and do not all return until about 6:30 p.m. The Singapore government has become very strict on the second language requirements in the schools and is no longer allowing exemption for expatriate children. So we now have one taking Chinese Mandarin and one taking Malay. This requires that we have private tuition for them at our home. We have employed two tutors that each come two times per week for an hour and a half each time. This greatly adds to the busyness of our home. So in a few years we will be a multi-language family. Perhaps the Lord has some special purpose of this also.

The elders and deacons in the church continue to labor very faithfully. It is truly amazing how much time they put in every week and how devoted they are to their work. As the church grows and develops there are many issues to face and matters to deal with. The bi-weekly session meetings often last into the early hours of the morning. Though the office bearers of the church are very young compared to those of our churches in the U.S. yet we are thankful that the Lord has qualified them in an unusual way to lead and care for the church. There are always many very difficult pastoral problems to deal with that must be handled with a great deal of wisdom. As we labor together in the church of Jesus Christ there are sorrows and burdens as well as great joys. We urge you to continue to pray for His church here in Singapore. Thanks be unto the Lord that He continues to add to His church here those who are saved. 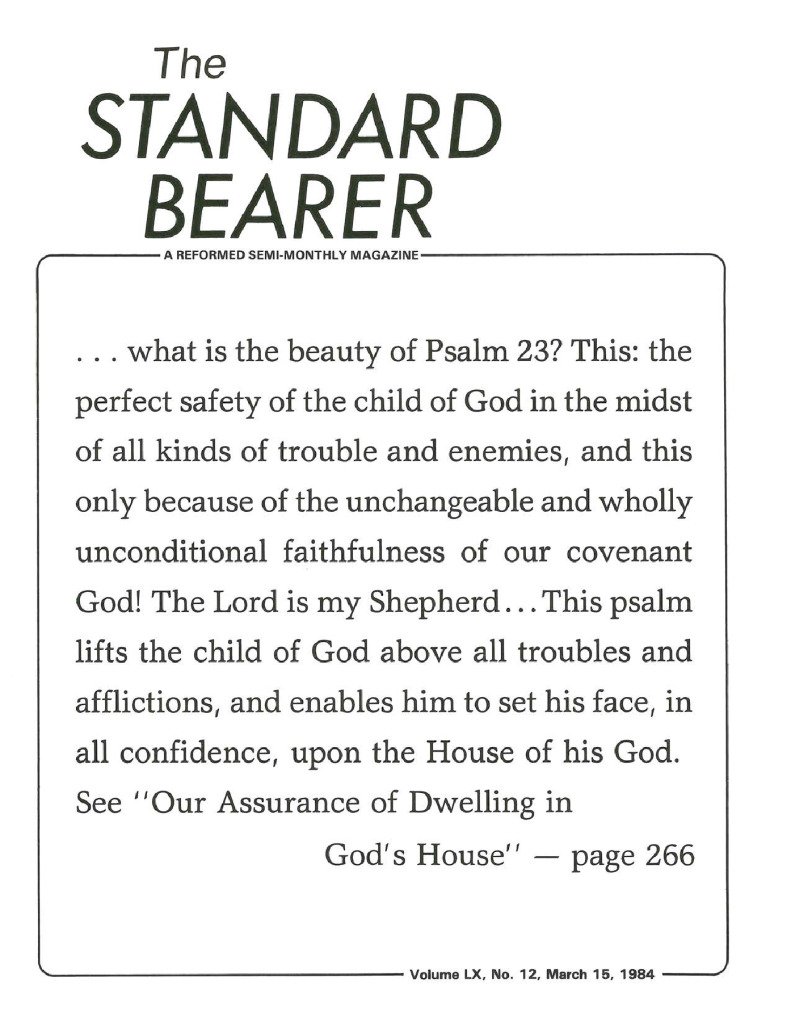