Soon after the great victory of the Reformed faith over Arminianism at the Synod of Dordt, the Reformed Churches in the Netherlands deteriorated in doctrine and life. Many reasons can be found for this rapid deterioration. The Netherlands had become extremely wealthy by means of worldwide trade, especially with the Dutch East Indies and the Dutch West Indies, and wealth is not conducive to spirituality. The Reformed Church in the Netherlands was a state church; that is, it was under the direction and control of the civil government. No good can ever come of this, for two reasons. One is that technically all citizens belong to the church, or at least the church is responsible for the spiritual welfare of all the citizens. Thus, within the church were many who were worldly, carnal, and godless, and it was difficult to discipline them. But another reason is that the spiritual welfare of the church was dependent on the doctrinal soundness and moral uprightness of the magistrates. Rarely does a nation have such magistrates.

Perhaps another reason for the rapid deterioration of the Reformed Churches was the spirit of tolerance that prevailed in the Lowlands. The Netherlands had been known throughout Europe, even before the Reformation, as a land where diverse views were tolerated and people were granted the right to express them at will. Such tolerance was not, of course, true in any absolute sense, and outrageous heresies could rouse the nation to righteous anger. Many in the Reformed Churches, ardent and passionate defenders of the faith, were what today would be called intolerant and bigoted, narrow-minded and condemnatory—while God would call them warriors in the spiritual battle of the ages. But, generally speaking, there was to be found more freedom of thought in the Netherlands than anywhere else in Europe.

One major factor in the deterioration of the Dutch churches was to be found in the inroads of heretical thought. Even though, for example, Arminians who refused to sign the Canons of Dordrecht were banished, they soon returned in full force to occupy pulpits in the land.

These inroads of false doctrine were related to the other reasons for deterioration that I mentioned above, but were also aided and abetted by the fact that refugees from all over Europe, especially from France, streamed into the Netherlands to find safety. Many of them took along their baggage of false doctrine. They were an infection that ultimately destroyed the body ecclesiastical.

All this is not to say that the Reformed faith was not maintained in many sections of the country. The Reformed faith always had its defenders, though, over the years, they grew fewer and fewer in number and weaker in influence. God preserved His truth in the land of our forebears for many years. It took the Secession of 1834 under DeCock to rescue it from almost total defeat.

One heresy that had nothing but bad effects upon the Dutch churches was the heresy of rationalism. It came into the Netherlands under the influence of a Frenchman by the name of René Descartes. This article is his story.

The Life of Descartes

René Descartes was born in France about 100 miles from the important city of Orleans. He was born, as the saying goes, with a silver spoon in his mouth and never had to work a day to earn his daily bread.

Descartes was of very poor health, but he possessed a brilliant mind. He was, for these two reasons, permitted to study at his own pace and by himself. This practice of studying by himself led him to form a lifelong habit of doing most of his work in bed in the morning. A change in this habit was to cause his death.

He was born Roman Catholic and so was sent to a Jesuit school in 1604, where he studied for eight years, although again at his own pace. After completing his studies with the Jesuits, he went to Paris and concentrated on mathematics, for his brilliance was especially in this field. Apparently his ill health did not prevent him from enjoying the pleasure of sin during these years, for his study of mathematics was done in connection with gambling and in an effort to “beat the odds.”

After four years in Paris, he served as a volunteer in the armies of various members of the royalty, among whom was Prince Maurice of Nassau, a relative of the savior of the Netherlands, Prince William of Nassau, and himself destined to rule in the Netherlands as a member of the House of Orange.

Travel and study occupied Descartes until 1623, when he settled in Paris. Applying himself especially to mathematics, he discovered and developed analytical geometry, by which discovery he became known as the outstanding mathematician in Europe, and his fame spread far from Paris.

Not only did he concentrate on math, but he also devoted his considerable intellectual acumen to developing philosophy. This was probably why Paris became extremely uncomfortable to him, for the Jesuits, who considered him their responsibility after his studies with them, did not take kindly to his philosophy, in which he seemed to be developing ideas that, in their implications, militated against the Romish doctrine of transubstantiation. He, as so many others, found the Netherlands to be a more congenial home.

Descartes stayed in the Netherlands for twenty years. There he wrote, taught, studied, and developed his mathematics and his philosophy. His ideas, especially in philosophy, were so radical that he was not altogether safe even in this land of tolerance. During the twenty years of his sojourn in this land, he moved no fewer than twenty times. He kept his place of residence secret, except for a few friends. Descartes claimed he did this because his studies required seclusion. The more likely reason is that the more he wrote, the more he made enemies.

Descartes did have influence in the Lowlands, especially in the University of Utrecht, where some of the professors were enamored with his philosophy. But he also had enemies. The Jesuits, having since the days of the Counter-Reformation set themselves up as defenders of the faith, were always hot on his trail. The Calvinists as well found in his writings and teachings serious threats to the Reformed faith. Descartes’ fiercest opponent was Gijsbert Voetius. We have met him before. He was a strong Calvinist who promoted in his writing and teachings the doctrines laid out by the Synod of Dordrecht, but he was also the antagonist of Johannes Cocceius, whose views we discussed in recent articles in the Standard Bearer.

Voetius fought bitterly against Descartes and made every effort to enlist the help of the civil authorities to stamp out this pestilential heretic. Voetius came within a hairbreadth of getting the magistrates to order the hangman to burn publicly Descartes’ writings. Voetius did succeed in getting Descartes’ philosophy stopped in the universities—but only for a time.

Both in 1644 and in 1648 Descartes returned to France in an effort to placate the Jesuits. He almost succeeded. But when he was coolly received in the royal court of France, and because he was fearful of returning to the Netherlands, he accepted an invitation from the eccentric Queen Christiana of Sweden to come to Stockholm to teach and write there. The move to Stockholm was difficult, but he made his way, with his books and manuscripts, to a land where he was promised safety from “persecutors.”

The demands of teaching and the rather rigorous climate were not conducive to good health. Teaching demanded that he get up at 5:00 in the morning. After living in Stockholm only four months, he caught a cold, which turned to pneumonia and resulted in his death. He died on the eleventh of February, 1650, almost 54 years old.

It is impossible and undesirable to go into Descartes’ philosophy in this article. It was a well worked-out system of thought that was a radical break from anything proposed in the past, but only the sketchiest of descriptions is necessary for purposes of this article.

It is necessary, however, to go back in time a bit to understand some of the influences on Descartes’ thinking.

Up until Descartes’ “breakthrough” in philosophy, the scholasticism of the Middle Ages had held sway. Among other things, scholasticism had attempted to harmonize the philosophy of Aristotle, the ancient Greek philosopher, with scriptural truth—at least scriptural truth as it was taught and maintained by the Roman Catholic Church. These efforts had reached their climax in the Summa Theologica of Thomas Aquinas. Descartes’ philosophy was a total rejection of scholastic thinking and, although such thinking had dominated in Romish circles and continental thought, Descartes wanted no part of it.

In Europe another movement had had powerful influence on the thinking of men. I refer to the Renaissance, a movement that started in Italy and spread swiftly across the Alps into all parts of Europe. The chief principle of the Renaissance, what my Church History professor in Seminary called “the material or subjective principle of the Renaissance,” was humanism. Humanism, briefly, set up man as the center of the universe. Man is in control of the universe, able to subdue it, the master of it. The universe is understandable by man’s powerful intellectual abilities, is intended for man’s pleasure, is to be subdued to advance man’s goals. What especially appealed to the theoretical mind of Descartes was the idea that man, by his own intellectual powers, could come to a thorough understanding of all things. 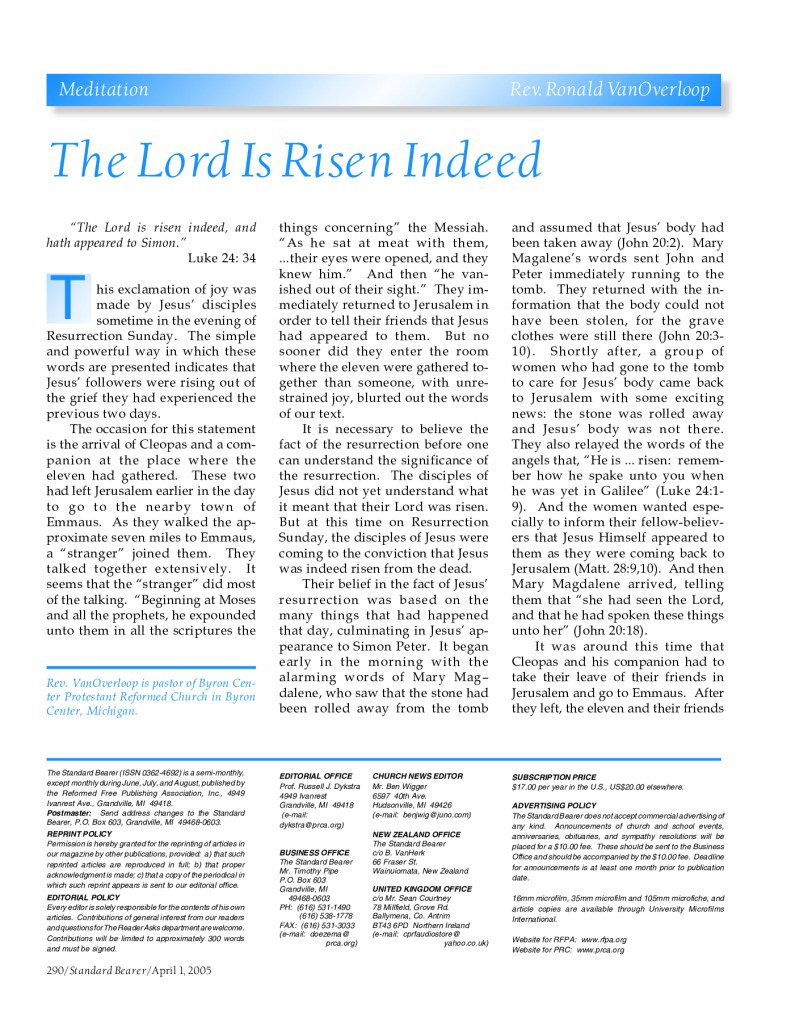