Remember the persecuted! Perhaps we think of the early Christian martyrs thrown to the lions. Perhaps we remember Stephen and others who were stoned to death by angry Jewish mobs. Perhaps we recall the heroic suf­ferings of the Reformation saints in the Netherlands. Martyrdom makes us think of the stake, the scaffold, and the dungeon.

Open Doors International, a Christian group support­ing persecuted Christians, reports that Christian martyr­dom doubled in 2013. The persecution of the church is a very serious reality for many of the saints today. They do not read about it in history books—they live it.

2,123 believers died for their faith in 2013 compared to 1,201 in 2012. Of course, those figures include only the ones whose deaths could be documented. Many other saints’ deaths (precious in the sight of the Lord) are known only to God. Moreover, the figures are only for believers who died for their faith. They do not include the many more who were threatened, intimidated, dispossessed, beaten, tortured, imprisoned, and enslaved. They do not include the number of church buildings destroyed, worship services broken up, women raped, children abused, and believers who have simply disappeared. It is tempting to view these numbers as mere statistics, but behind every statistic there is a widow mourning for her husband, there are parents weeping for their children, and there is unimaginable suffering endured by our brothers and sisters.

There are several organizations dedicated to providing information about the persecuted church: Open Doors International, Barnabas Fund, International Christian Concern, Release International, and Christians in Crisis are some of the best known.1

Open Doors International measures persecution with its World Watch List (WWL). Every year, the WWL documents the fifty countries in which persecution is the worst. The statistics and stories make sobering reading. For the twelfth consecutive year, North Korea ranks first, followed by Somalia, Syria, Iraq, Afghanistan, Saudi Ara­bia, the Maldives, Pakistan, Iran, Yemen, Sudan, Eritrea, and Libya. You can read the rest of the top fifty at the WWLwebsite.2

North Korea is the most difficult country in which to be a Christian. Christianity is illegal. Being caught with a Bible, praying, using the name of Jesus or of God, or any other form of Christian activity is punishable with death or a lifelong prison-camp sentence, which is a living death. It is estimated that some 50,000 to 70,000 are suffering in North Korean prison camps. One such Christian prisoner, Hea Woo, tells her story:

I could not tell you what the worst thing was I experi­enced. Every day in the camp was like torture. I often had to think about God’s plagues for Egypt. Being in this concentration camp felt like undergoing all those ten plagues at the same time. People were dying and their corpses were burnt. The guards scattered the ashes over the road. We walked that road every day and each time I thought: one day the other prisoners will walk over me.

Despite everything, I remained faithful to God. I re­mained faithful and God helped me survive. Not only that, He gave me a heart to evangelize other prisoners. Frankly, I was too scared to do it. I wanted to live. How could God ask me to tell the other prisoners about Jesus? I would die if they caught me. God persisted. He showed me which prisoners I should approach….

It was an encouraging message for those prisoners who walked on the edge of death each day. They were easily converted. Not only because of what I said. They saw the Spirit’s work in me. Sometimes I gave some of the little rice I got to others. When people were sick, I went to them and helped them with washing their clothes.3

Hea Woo is seventy years old. She was released and now enjoys freedom in South Korea. But such inconceiv­able suffering continues for some 70,000 of our brothers and sisters in North Korea, suppressed by the tyrannical regime of Kim Jong-Un. We who enjoy freedom to wor­ship, to teach our children, to read the Bible, and even to evangelize, can hardly imagine the daily life of a North Korean Christian, who, if he is caught, can be sent to one of those labor camps.

Of the rest of the top fifty persecuting nations of the world the majority are Islamic. When nations such as Somalia, Syria, Iraq, Egypt, and Afghanistan descend into civil unrest, it is the Christian minorities who bear the brunt of the persecution. In some of these nations, a purging of the Christian population is underway—there are about 1.3 million Christians in Syria, targeted by the rebel forces in that nation; it is reported that every two or three days a Christian is killed, kidnapped, or abused in Iraq; in September 2013, a bomb exploded at a church in Peshawar, Pakistan, killing 89 people and injuring many others. In other Islamic nations all religions except Islam are forbidden. In 2013 many Christian fellowships were raided in the kingdom of Saudi Arabia. The fellowships were closed down and the members arrested. The Mal­dives, an island in the Indian ocean popular with tourists, is far from idyllic for Christians. Ranking seventh in the WWL, the Maldives forbids all Christian activity, except for ex-pats. In Eritrea, a north African country, Christians are subject to raids, arrest, systematic torture, and imprisonment—often in metal crates in unbearable heat. There are an estimated 2.7 million Christians in Eritrea. WWL reports of one such saint: “Gabriella is an influential Christian in the underground church who was interrogated, tortured and kept in solitary confinement—but she never denied Christ. She describes her time in prison as ‘a honeymoon with Jesus.’” 4

A honeymoon with Jesus!

The letter to the Hebrews reminds us of these saints: “And others were tortured, not accept­ing deliverance; that they might obtain a better resurrection: and others had trial of cruel mockings and scourgings, yea, moreover of bonds and imprisonment: They were stoned, they were sawn asunder, were tempted, were slain with the sword: they wandered about in sheepskins and goatskins; being des­titute, afflicted, tormented; (Of whom the world was not worthy:) they wandered in deserts, and in mountains, and in dens and caves of the earth” (Heb. 11:35b-38).

We know that God gives His grace and Holy Spir­it—also to suffer—only to those who pray (Heidelberg Cat­echism, LD 45, Q&A 116). As the sufferings of the saints increase, let our prayers for the suffering brethren increase, “until [our] fellowservants also and [our] brethren, that should be killed as they were, should be fulfilled” (Rev. 6:11).

“Remember them that are in bonds, as bound with them; and them which suffer adversity, as being your­selves also in the body” (Heb. 13:3). 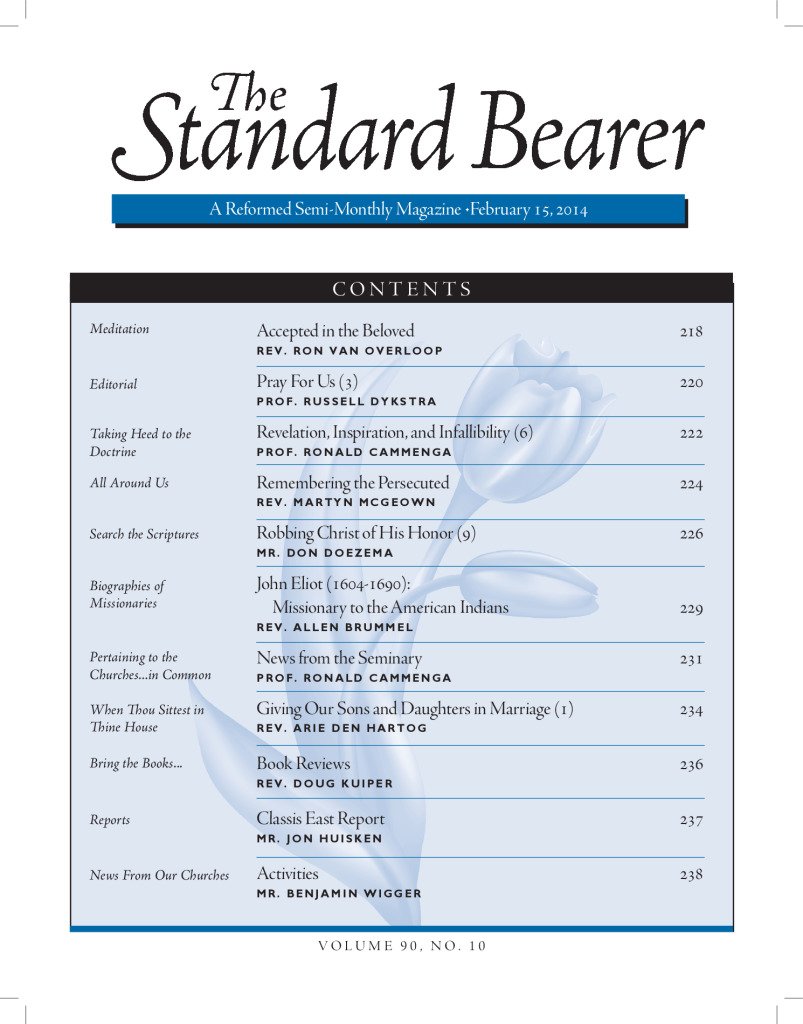