In the on-going debate about Scripture and its authority no little stir has been created by a brochure (in the series Kampen Exercise Books) from the pen of Dr. H.M. Kuitert under the title “Understandest Thou What Thou Readest?” This brochure is supposed to be about he interpretation of the Bible, according to its sub-title. In fact, however, it is about the Bible itself; and it is an obvious attempt to present in popular style and for the general reading public the so-called new theology concerning the authority and inspiration of Scripture which is current in the Netherlands and which finds its leading representatives in men like Dr. G.C. Berkouwer (to whom Kuitert dedicates this brochure in thankfulness for his “inimitable book,’De Heilige Schrift II'”!!!), Dr. Kuitert, and others.

Dr. Kuitert in his insistence that the writers of Scripture were time-bound, that is, limited in their views to the historical horizons of their own times (so that, for example, they could erroneously think and write as though the earth were flat and four-cornered, etc.), also refers to the Galileo-question.

Although one would think that some of these theologians would tire of threshing this old straw, especially since this argument has been repeatedly and effectively answered, they nevertheless continue to bring it up, Why, I do not know, except for the fact that it has been effectively used to deceive the simple sometimes.

In one of the Dutch papers, “Tot Vrijheid Geroepen,” G. Goossens has written a series of articles in which he criticizes Kuitert’s views as presented in the above-mentioned brochure. These articles have appeared under the title “Adamlessness in Kuitert.” In the second article (March, 1969) he very neatly answers Dr. Kuitert’s argument from the Galileo-controversy. In fact, he turns Dr. Kuitert’s argument against himself.

Because the Galileo-matter has been repeatedly brought up, also in our own country, and because Mr. Goossens treats this matter rather thoroughly and effectively, I am presenting a translation of a large section of one of his articles. All that follows in this editorial is a quotation and translation of the abovementioned article.

That the interpreters of the Scriptures are also strongly “time-bound” is illustrated by Dr. Kuitert by means of the well-known narrative of Joshua 10 (“Sun, stand thou still upon Gibeon; and thou, Moon, in the valley of Ajalon.”) and the Galileo-question.

A little further, on p. 26: “Although it stands there, today we say: ‘Anyone who would contend that Joshua 10:12, 13 would inform us that the earth stands still and that the sun revolves, has not understood what he reads.’

“Although it stands there,” says Dr. Kuitert, but the amusing thing is that Kuitert himself never tumbled to it that what he asserts one should literally read there does not stand there. The fact of the matter is that Joshua does not say of the earth that it stands still, does not turn upon its axis, or something similar. If Galileo in his time had only contended that the earth turned upon its axis—leaving the rest as it is—then the exegetes could not have attacked him with Joshua 10:12, 13, even with the best intentions in the world.

Yet that would not have helped him very much. For the simple reason that the (Roman Catholic) “interpreters” of the beginning of the 17th century, who busied themselves with Galileo’s “heresy,” were all cut from exactly the same wood as Dr. Kuitert today. And it was no different with Galileo.

By “time-boundness” of interpreters Dr. Kuitert would understand, not wrongly, that these live in a definite age, with a definite state of scientific development. Whatever is known of the universe and the course of the heavenly bodies or whatever is thought about these things, whatever is discovered in every sphere of natural science and is accepted as established, furthermore whatever—upon whatever ground that may be—is conceived and generally accepted as the truth,—all of this together constitutes the “world image” of a certain period. Not all contemporaries have that same world-image. One finds it in the sphere of science, and from that height some of it trickles down—all according to the ability of individuals to grasp it—to the masses. In our time men speak (as we are also assured by Prof. Van de Fliert in his brochure, “Fundamentalism and the basis of the geological sciences”) of “our world-image,” which—compared with that of earlier generations— “has attained to tremendous dimensions, in time as well as in space.” Well then, no one need dispute this. In another century—should the world still exist then—every scholar will be able to say that again,—perhaps after he is basically done with the “world-image” of the present generation for good and all. Who will say?

What Dr. Kuitert now wishes to do by recalling the Galileo-question is to support the popular fable that the earlier exegetes (i.e., those of the beginning of the 17th century) viewed the Bible as a book from which you could also learn astronomy, geology, biology, etc. etc. To that end they read the Bibleliterally. However, there is no truth to this.

If only those “interpreters” of the Inquisition had read literally! Then they would have readily comprehended that Joshua employed exactly the same word usage as they themselves and also as we still do today. We speak too, do we not, of the sun which goes every day from the east to the west? If on a summer day one should notice that in the evening at 10 o’clock the sun still stood just as far above the horizon as at 7 o’clock, he would cry out entirely correctly: “The sun is standing still!” We also speak (even today) of the tropics, or solstices, between which the sun goes and returns, (keerkringen, waartussen de zon heen en weerkeert). Dr. Kuitert observes correctly that Joshua 10:12, 13would tell us something entirely different than that which the interpreters in the days of Galileo read in it; but when he then continues “that the narrator avails himself of the knowledge which he has of the sun and moon,” this last assertion is, of course, nonsense. Just as well as it would be nonsense if someone who heard Dr. Kuitert assert at the Zandvoort beach that the sun set beautifully in the sea and the moon rose above the dunes in stately grandeur to the heavens, would assure us that Dr. Kuitert avails himself of the knowledge of the sun and moon which he has. Fortunately the Bible does not concern itself at all with “world-images.” It speaks common human language.

Hewn From The Same Wood

How is it now with those “interpreters” of 1616, and especially with those of 1633, with whom Galileo had trouble?

They certainly did not swear by the Bible, saying that it stands thus and so when read literally and that this is now the “world-image” of the “Biblical writer” and therefore also ours, and that whatever is not in harmony with it is heresy, etc., etc.

No, they swore by the science of Aristotle, who knew nothing of a Bible. Thomas Aquinas had been a genial coordinator, who had very neatly fitted together the doctrine of Aristotle and the doctrine of the church. Well now, entirely in harmony with the teaching of Aristotle the learned astronomer Ptolemy (also a heathen, as far as is known), who lived about 130 A.D., projected a world-image on the basis of his own observations and reckonings in which the earth stood in the center of the universe. The earth stood still, and the sun and the planets moved at enormous speeds around this center. All that was known about astronomy until the days of Ptolemy he had compiled in a book, named the “Almagest.” Far into the 17th century this scientific work was regarded by many men of science and by church authorities as the end of all contradiction.

Had Galileo but remained quiet and confined himself to his own scientific sphere, continuing to build on the teaching of Copernicus that the earth turns about the sun and also has its own revolution about its axis, etc., he would not have encountered much difficulty. But he found it necessary to make it clearly known that the traditional interpretation of Scripture erred on some points. For it was scientifically certain that. . .etc., etc. Against this the ecclesiastical authorities then took up arms, supported by the overwhelming majority of the men of science (who often were at the same time church authorities).

Actually they stood, without their knowing it, on the same standpoint as Galileo. They also swore by a certain science. In this instance, that of Ptolemy. Armed with those scientific spectacles, they read the Scriptures. They did not permit Galileo to put other spectacles on them.

They did not get it from Scripture that the sun turned about the earth. No, they had long ago gotten that from science, namely, from the Almagest of Ptolemy. And then they thought to find it also in the Bible.

Naturally, the fat was in the fire when in 1632 he wrote his “Dialogue” about the two chief world images, that of Ptolemy and that of Copernicus. In that work he let three persons argue about the pro and con of both world-images. The one was a confirmed follower of Copernicus, the other a fanatical opponent, well-versed in the teaching of Aristotle. In the book this one is pictured as a half-baked simpleton. The third plays the part of an impartial auditor, a kind of moderator—to use a modem word. It caught the attention, however, that Galileo put the arguments which the Pope and his prelates used in their opposition to the world-image of Copernicus in the mouth of that half-baked simpleton.

As is well-known, in 1633 Galileo was compelled to repudiate his teachings, which he did only out of self-preservation, with the words: “I declare that I believe, and always shall believe, what the Church acknowledges and teaches as Truth.”

All that can be deduced from the history of Galileo and his conflict with the ecclesiastical authorities is this, that those “interpreters” as well as Galileo and his supporters both swore by science. Actually the difference concerned only the question whichscience one had to adhere to, which world-image one had to have in order to be able to read and understand the Scriptures well This, then, is precisely the same question at issue today with Dr. Kuitert, cum sociis, and with many other scholars—also non-theologians. Again they swear by science. This time, however, by the teaching of evolution. Therefore we said: hewn from the same wood.

His opinion, that Adam and Eve did not exist and that there was no paradise, no serpent, and no fall, no finely formed human beings six or eight thousand years ago,—this he did not get from the Scriptures. No, the evolutionists taught him this. What was taught him about fossils and earth-strata has become for him decisive proof for the untenableness of that which the writer of Genesis relates to him as “having really happened.”

Prof. Van de Fliert has remarked in his previously cited brochure that the “fundamentalist,” who wants to see the trustworthiness of Scripture scientifically proven, must live in fear and anxiety for the results of an ever-developing science because this development might indeed also be able to disprove that trustworthiness.

This, however, is a completely erroneous presentation of matters. For those who should have to live in fear and anxiety are exactly the theologians like Dr. Kuitert and his fellows. For as soon as their evolutionistic world-image is toppled by newer results of scientific development—and those results are already among us—nothing remains of their entire theology, which is directed toward a “better reading and understanding” of the Scriptures.

That anxiety and fear then reveals itself in them also in a haughty self-withdrawal into an evolutionistic ivory tower,—inaccessible to scientific results other than those which appear to be a confirmation of evolutionism. 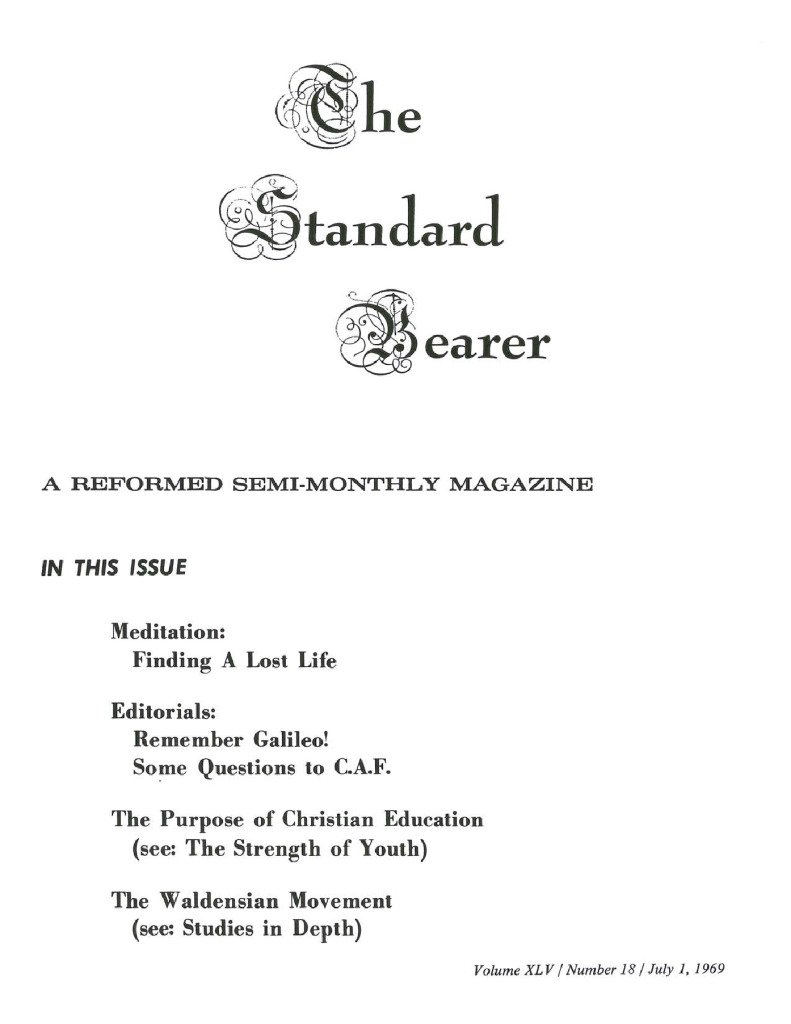