Relating to the catholic/universal church

Relating to the catholic/universal church

In my last article on the church catholic or universal (Jan. 1, 2018, SB, v. 94, p. 156), I addressed the need to recognize that the church redeemed by Christ is made up of all God’s elect people from different places, races, and faces—of difference nations, vocations, and denominations. Our weekly confession of this in the Apostles’ Creed should be more than habitual speech; we ought rather to believe sincerely that God preserves the existence of such a people here in this world, including those outside the membership of our Reformed congregations. We must be willing to recognize these brothers and sisters in Christ. Refusing to do so is a haughty and heretical attack against God’s Word, His people, and His saving work.

Not only should we recognize these members of the universal church, but we should relate to them as spiritual siblings. In order to avoid paying mere lip-service to the catholicity of the church, we should seek real relationships with her members. Of course, we must be wise and vigilant in our friendships with confessing Christians who differ in faith and life (whether inside or outside our church denomination for that matter); but there ought to be a degree of fellowship with other believers if we truly believe our confession of “an holy catholic church.”

When we come into contact with members of the universal church of Christ, we will find that many of their respective churches have no formal ecclesiastical ties with ours (nor should there be, in many cases). But whether we like it or not, God has established a spiritual unity in His church universal. While attending high school and college, I experienced this first-hand. I came into contact and enjoyed fellowship with many conservative Presbyterian and Reformed young people outside of my church affiliation. Among plenty of nominal Christians who did not care about doctrine or life, I discovered some young people who took Scripture seriously, and some who even proved themselves more biblically astute and sanctified than young people in my own church (including myself). As I joined these fellow Christians in an honest pursuit of truth together, I found some differences in our understanding of Scripture. There was a significant contrast between our stances especially concerning common grace, divorce and remarriage, and the covenant. And yet, while not dismissing our disagreement on these weighty issues, I realized that we also had much in common.

Spiritual unity, I have learned, is not an “all or nothing” idea. Rather, there are varying degrees of unity. Among the members of the universal church, I am spiritually united to some more than others, but I am still wonderfully united in some degree to all those who are elected, redeemed, and regenerated by Christ. This will and should determine the kind of relationship I have with each member of Christ’s family. To understand how we should approach believers in the catholic church of Christ, here is a principle to follow: Inasmuch as I agree in doctrine and life with others, to that extent I should have fellowship with them. This principle does not answer every specific question in the young person’s mind, but it should help in our friendship choices with other Christians. Those who sincerely hold to the same doctrines and life values as I do will be in closest relationship with me. Then, not neglecting those with whom I am most closely united, I may (and should) look outward to seek relationships with other Christians who differ slightly.

This concept is not a new idea, but is in fact part of an official stance of the Protestant Reformed denomination— a binding synodical position found in the Constitution of our churches’ Contact Committee. “The Protestant Reformed Churches in America, in obedience to Scripture as interpreted in our three forms of unity, confess that there is one holy, catholic church.” The doctrine of the universal church is the basis for what follows:

They believe, further, that it is their sacred duty to manifest the true unity and catholicity of the church on earth in as far as that is possible, not only in their denominational fellowship but also in conjunction with all churches which have obtained like precious faith with us, both domestic and foreign.”1

The very existence of this Contact Committee along with these statements is our official recognition that spiritual union already exists between the members of our churches and many of those in other denominations. Not only should we be aware of this unity, but we should make an effort to show it. What our churches hold to officially is what we as members should seek to carry out in our relationships with other believers.

To avoid misunderstanding, let me be very clear about what I am not suggesting. The young person seeking to recognize and relate to the universal church must pay careful heed to this. Do not twist these words to mean that we may minimize any truth of the Scripture or diminish the danger of any false doctrine. Do not wrest this teaching to excuse enjoyment of worldliness with nominal Christians. Do not imagine that we may date those who hold to false doctrine while ignoring the differences. Do not somehow take this as an allowance of fellowship with those who are under church discipline or who knowingly and willfully continue in sin.

On the contrary, here are four practical points that I am suggesting. First, show meekness and love in your interactions with other confessing Christians. On the basis of Scripture, the Canons of Dordt say,

With respect to those who make an external profession of faith and live regular lives, we are bound after the example of the apostle to judge and speak of them in the most favorable manner. For the secret recesses of the heart are unknown to us. And as to others, who have not yet been called, it is our duty to pray for them to God, who calls the things that are not as if they were. But we are in no wise to conduct ourselves towards them with haughtiness, as if we had made ourselves to differ (Heads 3 and 4, Art. 15).

Admittedly, we ministers may sometimes be a poor example in this. In our efforts to identify the truth and sharply point out the lie, we occasionally forget the call for meekness and love towards our spiritual siblings. God’s people must not emulate this spiritual flaw. As we bear witness to those in other churches, our priority is not beating them in an argument but winning their souls with truth and grace. Our approach should not be a quick-tempered bashing of others but a patient hearing before speaking the truth in love. The cause of the offence should only be the content of the gospel; it should never be the haughty spirit with which we too often wield the sufficiently sharp sword of the Spirit.

In the second place, while we may judge doctrine and life with the Word of God, let us not judge a person’s eternal destiny. Call false doctrine a lie. Call sin evil. Even warn about hell when we meet those who impenitently reject Christ and continue in sin. But identifying or suggesting our neighbor a reprobate is folly. We do not have God’s vision to determine an invisible soul unregenerate, nor do we have God’s foreknowledge to predict a soul’s future damnation. As we approach other Christians, let us remember that we are not saved from hell by the church we attend. We are saved by Jesus Christ alone, through faith alone.

Thirdly, pray for those in the universal church. You have brothers and sisters in all kinds of countries. You have spiritual siblings in the many States of America. You have fellow believers in various denominations. Pray for them. As you meet these specific people, pray for them specifically! Sometimes, we feel like we continually repeat the same things in our prayers. One reason might be that we are forgetting about many others in the catholic church for whom Jesus Christ is interceding in heaven.

My fourth proposition is to develop friendships with those of the universal church. Prioritize your relationships, so that you make your most important friendships with those among whom you have the most spiritual agreement. Start within your local church and denomination. Then proceed to cultivate relationships with those our denomination has “sister” and “corresponding” church relationships. And then as you labor alongside other believers in the work place, as you study among other Christians at college, as you find God’s people pocketed in unexpected places, carefully form friendships with them also. While we must always be on guard against false doctrines and temptation, we ought to rid ourselves of the phobia we have toward Christians whose weaknesses are different from our own—and whose strengths we may find valuable.

The doctrine of the holy catholic or universal church can be simply applied this way: love your neighbor. “As we have therefore opportunity, let us do good unto all men, especially unto them who are of the household of faith” (Gal. 6:10). If we refuse to recognize and fellowship with our spiritual family, God will one day powerfully and beautifully make our stubborn hearts realize what we missed. This is a vision of what will soon be: “After this I beheld, and lo, a great multitude, which no man could number, of all nations, and kindreds, and people, and tongues, stood before the throne, and before the Lamb, clothed with white robes, and palms in their hands; and cried with a loud voice, saying, Salvation to our God which sitteth upon the throne, and unto the Lamb” (Rev. 7:9, 10).

1 The Church Order of the Protestant Reformed Churches and Constitutions of Standing Synodical Committees, Rules and Regulations, By-laws, Forms, Declaration of Principles, 2015 edition, 40-41. 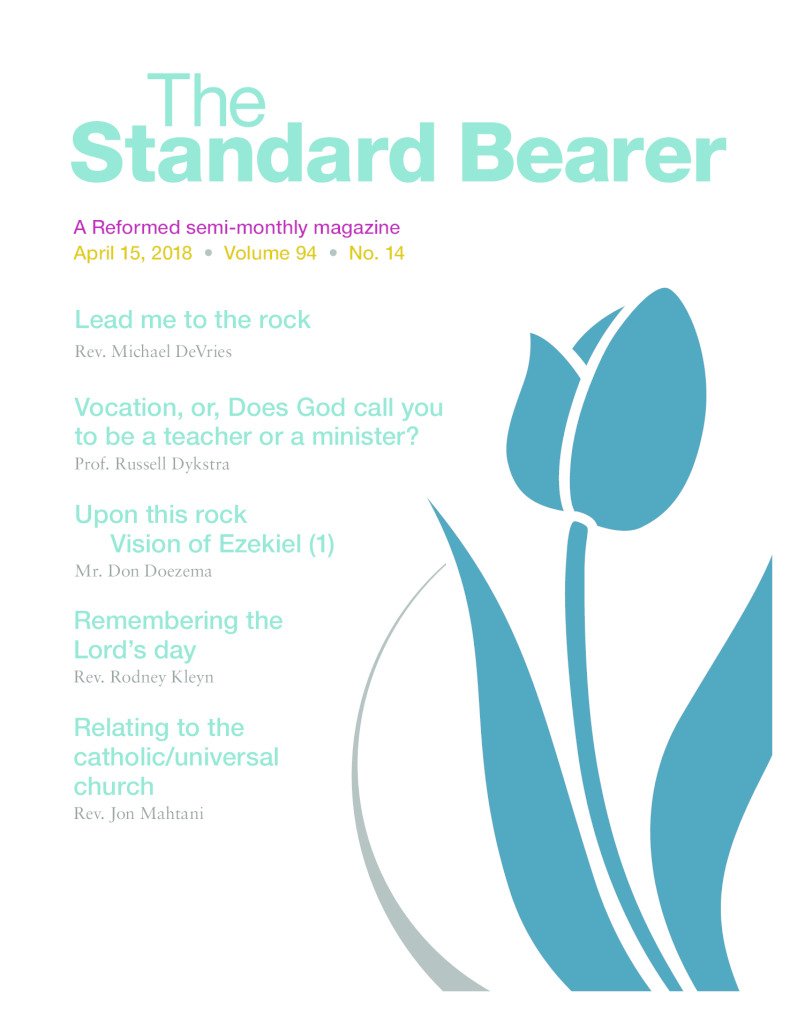