. This is the first of three anticipated installments of the written transcript of Prof. Hanko’s Reformation Day Lecture, delivered in Hudsonville on October 30, 1980.

At least 99% of those present tonight go under the name of Reformed. That name has come directly from the mighty movement of the Sixteenth Century called the Reformation. By using the name Reformed we confess that we are spiritually descended from the fathers of the Reformation. And by tracing our spiritual ancestry back to the Protestant Reformation of the Sixteenth Century we confess that we hold to the same truths which the Reformation held. We want to be identified with that movement; we want everyone to know that we stand for what the Reformers stood for; that we hold fast to the doctrines which they thought to be the truth of the Word of God; that we champion these truths as they did; that we confess them in the midst of the world as they confessed them; and that we are prepared to make the sacrifices for them which they made.

At this time of the year when the church of Jesus Christ commemorates the Reformation, she is not only called upon to recall that the Reformation is part of her own spiritual tradition, but the church is asked, yes, obligated before God to give honest answers to certain questions. Chief among these questions is the question of whether we are the faithful sons and daughters of the Reformation that we ought to be.

The Reformation was the name which was given to that movement of the Sixteenth Century because, through the work of the Reformers, God reformed His church. He made it anew. It needed renewing because, through the centuries in which Roman Catholicism had held sway, the church had lost her identity as the church of Christ. It had strayed so far from the doctrines of the Scriptures and had become so corrupt in morals and in life that, as the Reformers said, it was no longer recognizable as the church of the Lord Jesus Christ. No one who understood from Scripture what the church was and what it was supposed to be could recognize the church any longer in the Roman Catholic institute. It had to be re-formed. It had to be reformed after the pattern of the Scriptures and after the pattern of the church established by the apostles. God wrought that work. He re-formed the church; therefore we speak of the Reformation.

When we give to our churches the name Reformed, we mean that we want our spiritual lineage to be traced back to that mighty event: We want to claim Luther and Calvin and the other Reformers as our spiritual fathers. Once a year on Reformation Day we look back to that event which happened over 450 years ago and point to it with thankfulness to God and say to others and to ourselves, “That event belongs to our history as Reformed churches.”

But there is surely more. When we call ourselves Reformed, we insist that we are re-formed. And we are not only re-formed because 450 years ago the church was re-formed by the hand of God, but we are re-formed and, therefore, Reformed because reformation is always, in every moment of the church’s life, the calling of the church of Jesus Christ. That is why a motto of the Reformed Churches for the last 450 years has been: “Reformed, yet always reforming.” By this motto our fathers meant to emphasize that it is the essential mark of being Reformed that the church is always reforming. The two go together and are inseparably connected. You cannot, says this motto, claim to be Reformed unless you are a church always reforming. The one mark, which clearly marks churches that belong to the Reformation is the mark of continuous reformation within her own ecclesiastical life.

That is the question, therefore, that faces us tonight. Are we as a church always reforming? This is a question which faces all of us. Denominations do not enter into the matter directly. What has to be said is something that has to be said to all of us. I speak with equal intensity, equal earnestness, and equal concern to my own fellow saints within our own denomination. It is neither proper nor correct to say that other churches need reforming but our own do not. If we say this, we forfeit our right to call ourselves sons and daughters of the Reformation. We can best celebrate this glorious event of God, therefore, by asking ourselves before the face of God: Are we a church reformed, yet always reforming?

Why is it necessary that a truly Reformed church be at the same time a church which is always reforming? The answer is that, as long as the church of our Lord Jesus Christ is here upon earth, the church is not perfect. And, because the church is never perfect, the church is constantly open to the danger of decay and deterioration. This was true of the Romish Church. For many centuries before the Reformation it had so corrupted doctrine that the doctrine of the Scriptures was no longer heard. The truth of Christ and Him crucified was completely obscured by all the ceremonies, false rituals, empty liturgy, and doctrinal heresies which prevailed. Even more, the Romish Church took the Scriptures out of the hands of the people of God so that they might not read for themselves of Christ Who died for the sins of His people and of salvation which comes only through His cross. Further, the church had become so corrupt that not only was every moral depravity practiced in the church at large but it had become the normal everyday practice of the clergy, from the Pope in Rome to the lowest parish priest. One could no longer recognize the church of our Lord Jesus Christ in the Romish institute.

But what was true of the Romish Church is always true. Because the church is not pure, its tendency is always towards decline. There are especially two reasons why the church is never pure. One reason is that the saints, from whom the church is formed, are themselves saints only in principle. They are still sinners who have only a small beginning of the new obedience. The other reason is that there is always present in the church a carnal element. Scripture often refers to this and points out that the carnal and unbelieving element is even often a majority. This very truth elicited from the heart of the prophet Isaiah the anxious cry that the church is a hut in a garden of cucumbers, a beseiged city. “Except the Lord of hosts had left unto us a very small remnant, we should have been as Sodom, and we should have been like unto Gomorrah” (Isaiah 1:9). That truth is emphatically stated in Romans 9:6 where Paul states that it has never been true in all the history of the nation that all those who are of Israel are truly Israel. There are many who are of Israel but are not, in fact, Israel. This is always true of the church. As it was true in the nation of Israel prior to the coming of Christ, so it is always true in the church of Jesus Christ after Pentecost.

Nevertheless it is also a fact that there are certain times in the church’s history when, although there is a carnal element present in the church, the true people of God are so in control of the church that the doctrinal, ethical, and moral direction of the church is determined by them. That was the case in Israel, for example, during the time of King David and King Solomon. As large as the wicked element was and as numerous as were the reprobate seed within the nation, the direction of the nation as a whole, the doctrinal, spiritual and moral direction of the nation was determined by God-fearing people. When that happens the church fulfills her calling in the midst of the world and is blessed by God.

But there is always an opposite tendency in the church. And so it happens sometimes that not the people of God are in those positions of power and control, so that the ecclesiastical, doctrinal, and ethical direction of the church is determined by them, but the wicked are in control. That happened too, in the nation of Israel, repeatedly, and it was because of this that there was in the nation the need for reform. When godless Ahaz was king, he imported an altar from Damascus to set up in the holy place of the temple so that the gods of the Syrians might be worshiped. Along with this, false prophets and false priests corrupted the sanctuary and the Word of God. So evil did the nation become that God raised Hezekiah to bring reformation in the nation. The direction of the nation was determined by ungodly men. There were people of God in that nation, but the control of the nation was out of their hands. And the whole moral and spiritual direction of the nation was determined by those who were enemies of God and of His promise.

But sometimes the opposite happens. Sometimes the wicked come into control. And when the wicked come into control then there are unregenerated men on the pulpit, who do not preach the gospel of Christ and Him crucified. They hide the cross behind the words of men. There are unbelievers in the office of elders and deacons. The delegates to the ecclesiastic assemblies are unregenerated and unbelieving men and the decisions that affect the life of the church are made by men who are enemies of the cause of Christ and enemies of the gospel of salvation. When this happens the entire direction of the church, even though the people of God may be present in it, is determined by men such as these.

Now, it is very striking and very important that we understand that what is true of the church at large is true also of the individual life of the child of God.

The child of God is, from a spiritual and moral viewpoint, two different people. He is, on the one hand, a saint in whom dwells the Spirit of Christ and in whom is operative the powerful work of regeneration. But there is in that same child of God, as long as he stands on this side of the grave and is a pilgrim in this present world, the old man of his sinful nature, which hates God and is opposed to all that belongs to the kingdom of God and is ridden with sin and guilt. Both are present in the Christian so that what is true of the church at large is true of the individual child of God as well.

But there are times in the life of the child of God when the opposite happens and when the very powerful influences of sin that are rooted in his nature and are enemies of all that is holy become so strong in him that they determine the course of his life, his ethical and spiritual direction. 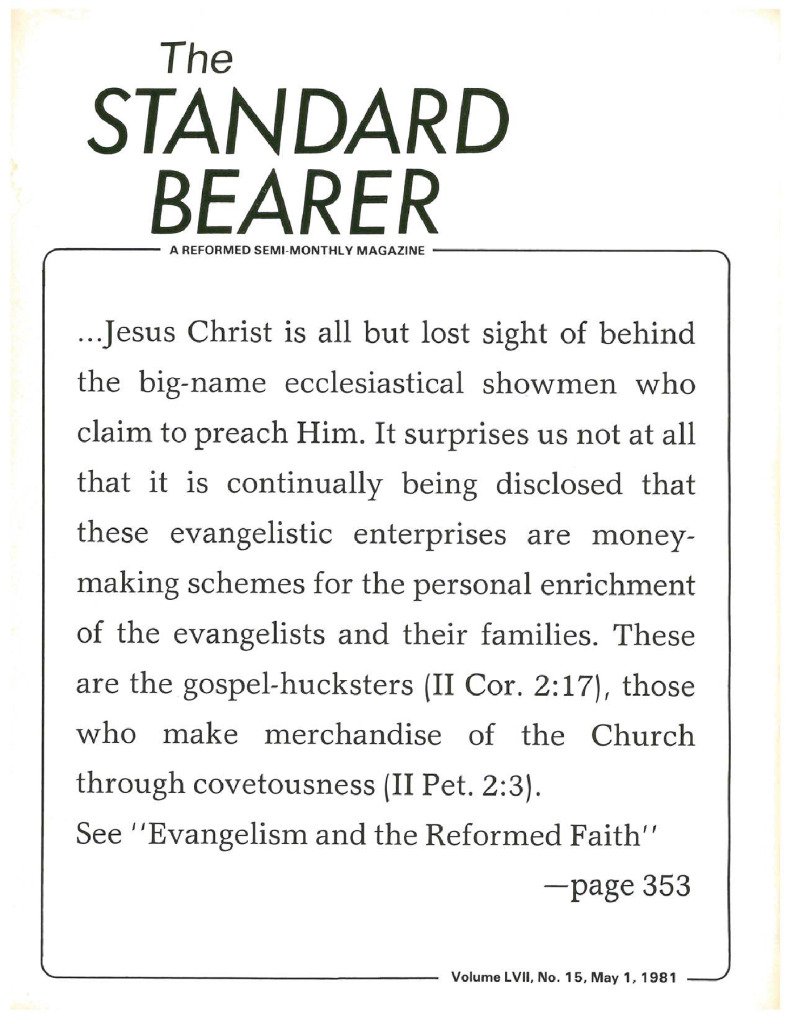