A previous article (April 15, 2013, p. 320) spoke of how today many are redefining the term redemption. The redemption of which they speak is very different from the redemption spoken of in Scripture:

–  They speak of a “redemption” for this world, rather than for the church.

–  This redemption would involve not a deliverance from sin, but rather some external changes in society designed to improve merely the bodily life of human beings.

–  Individuals of different religious faiths could join hands as “redeemers,” working together to bring this about.

This is a very serious, radical redefinition of a fundamen­tal doctrine of Holy Scripture.

Those who go down this road will likely end up rede­fining other doctrines as well. Consider, for example, the connection between election and redemption. Election refers to God’s eternal decree to redeem some people. That being the case, redefining redemption will likely lead to redefining election as well.

In this article we consider an example of this. We take a look at an attempt made by some today to change the doctrine of election, so that it will fit with this new doctrine of redemption.

Of our three Reformed confessions, the Canons of Dordt explain the doctrine of election in the greatest detail. According to Article 6 of the First Head of the Canons, we confess to believe:

the profound, the merciful, and at the same time the righteous discrimination between men equally involved in ruin; or that decree of election and reprobation, revealed in the Word of God.

This article of the Canons speaks of God’s decree con­cerning salvation as being one decree with two aspects (election and reprobation). Those who hold to the Reformed creeds, therefore, confess that God has eter­nally chosen to save some people, and has reprobated the others. This doctrine concerning both election and reprobation has been commonly referred to as double predestination.

There are many today, however, who refer to them­selves as Reformed, but who nevertheless reject this biblical teaching. Some even reject it explicitly:

It is our view that double predestination, despite being taught by some of the most significant theologians in the Christian tradition, is a mistaken interpretation of scripture’s depiction of election.1

This doctrine—taught in our Reformed confessions, and not just by some “significant theologians”—the three Calvin College professors, who wrote the book quoted above, come right out and reject.

Salvation for more than the elect

The elect are the ones whom God has unconditionally chosen to save from their sins. The elect and the saved, therefore, are one and the same.

But that doctrine does not fit well with the teaching that God desires to redeem this world. If God has elected to save only some people, then there is no redemption for those who are outside of the elect.

Thus a new doctrine of election has been sought. And one that appeals to many sounds like this:

To be chosen, to be elect, therefore does not mean that the elect are the saved and the rest are the lost. To be elect in Christ Jesus, and there is no other election, means to be incorporated into his mission to the world, to be the bearer of God’s saving purpose for his whole world….2

According to this new doctrine, the elect are not the only ones saved. There is a salvation for those who are outside the elect.

In other words, the elect are chosen by God to serve the non-elect. But is that the correct relationship be­tween election and service? Consider the following pas­sage from Romans 9:

(For the children being not yet born, neither having done any good or evil, that the purpose of God according to election might stand, not of works, but of him that calleth;) It was said unto her, The elder shall serve the younger. As it is written, Jacob have I loved, but Esau have I hated (Rom. 9:11-13).

God says the reprobate serve the elect. The church is not chosen for the sake of this world. Rather, God makes use of this world for the good of His church. This new doctrine turns this completely around.

This serves to illustrate that the changes being pro­moted today are not minor. God speaks of redeeming the church, but many are speaking of redeeming this world. God says that Esau shall serve Jacob, but many today are saying that Jacob must serve Esau.

2 Lesslie Newbegin, The Gospel in a Pluralist Society (Grand Rapids, MI: Eerdmans, 1989), 86–7. Rev. Newbegin (1909-1998) was an ordained minister in the Church of Scotland who became the Associate General Secretary of the World Council of Churches. He is quoted by the three Calvin College professors in a section of their book that promotes a “rethinking of the doctrine of election” (p. 357). 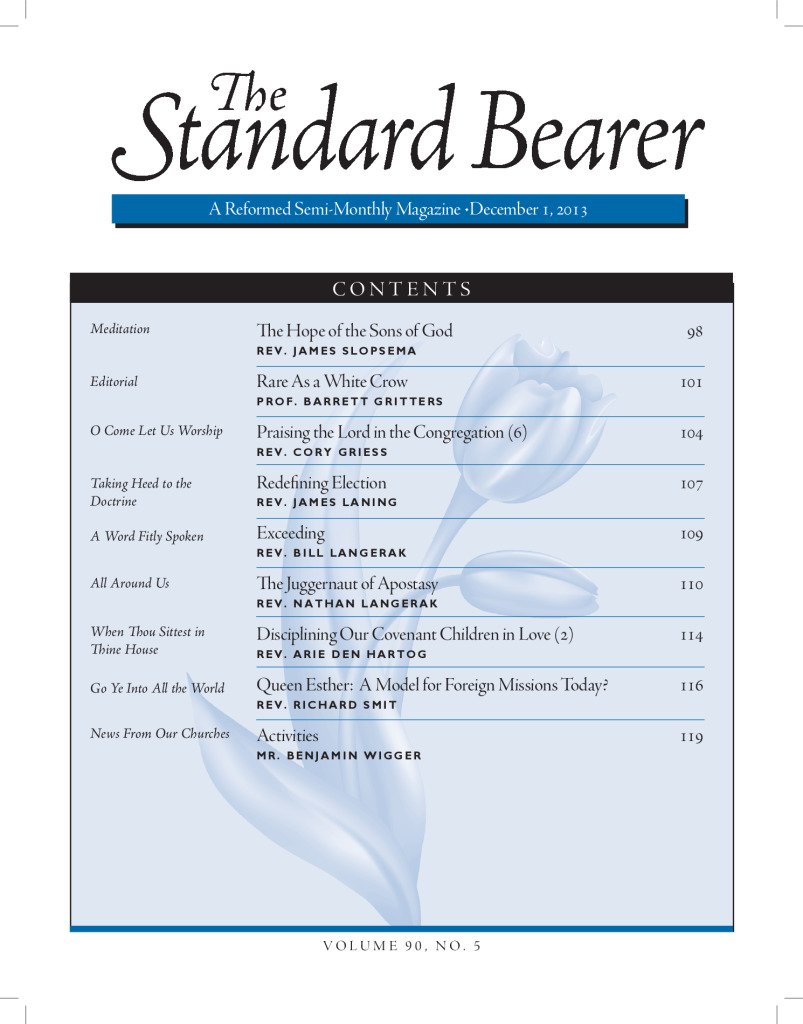