Recognition of Other Reformed Churches (1)

Recognition of Other Reformed Churches (1)

“Churches whose usages differ from ours merely in nonessentials shall not be rejected.”

Article 85 of the Church Order of the Protestant Reformed Churches arises out of the marvelous truth of the catholicity of the church. This article was included in the Church Order because the Dutch Reformed churches desired to acknowledge the Reformed churches found in other lands. With the church of all ages, they confessed “an holy, catholic church.” This “holy church,” according to Article 27 of the Belgic Confession of Faith, “is not confined, bound, or limited to a certain place or to certain persons, but is spread and dispersed over the whole world; and yet is joined and united with heart and will, by the power of faith, in one and the same Spirit.”

Believing the catholicity of the church, and believing it to be our solemn calling before Christ, the one Head of the church, to manifest the unity of His body, the Protestant Reformed Churches do not reject “churches whose usages differ from ours merely in nonessentials.” Article 85 is negative—deliberately so. Like the prohibitions of the Ten Commandments that are framed as they are on account of the tendency of our sinful nature, so is Article 85 negative. Always there is the tendency to suppose that our way is the only way and that those who differ from us in any respect are in error. Really Article 85 concerns the same sinful inclination to pride within a denomination that was addressed in Article 84. Only now the “lording it over” that Article 84 warns against extends to other churches and denominations. No such attitude may manifest itself in our dealings with other churches. On account of usages that are merely nonessential, they shall not be rejected.

What joy such ties have brought to the Protestant Reformed Churches throughout their history! And what joy they are at present!

The sum and substance of our present Article 85 go all the way back to the earliest history of the Dutch Reformed churches. Already the Convent of Wezel, 1568, concluded the articles that it had drafted for the churches by saying:

The ministers who have taken the trouble to compile these regulations want herewith publicly to testify before God and men that they in the determination of these points, which so far have been determined for the benefit of the churches in the Netherlands and their common and unified ordering, have in no way done this to the detriment of the other [foreign] churches, but that they have only taken into consideration the time, the places, the persons and other circumstances [peculiar to the Dutch Reformed churches]….

The Synod of Emden, 1571, did not include in its Church Order an article resembling our present Article 85. Nevertheless, the spirit of the article is contained in an article that the synod drafted specifically in reference to the French Reformed churches.

In all non-essential matters no churches shall be rejected that use a different method from our own.

The Synod of Middelburg, 1581, included a similar article in its Church Order, but added the word “foreign,” thus making explicit what was implicit in the previous articles.

In indifferent things the foreign churches which have different customs than our own shall not be rejected (Article 46).

The Synod of the Hague, 1586, reaffirmed the decision of Middelburg in Article 78 of its Church Order, as did the Synod of Dordt, 1618-19, in Article 85 of its Church Order. This is basically our Article 85, with one deletion. The Christian Reformed Church revision of the Church Order that was approved in 1914 dropped the word “foreign” from the article. VanDellen and Monsma report that the adjective “foreign” was dropped because the CRC “wanted the article to apply to Reformed denominations right in our own country, as well as to Reformed Churches of other countries” (The Church Order Commentary, p. 344).


Churches That Are To Be Rejected

The Belgic Confession of Faith makes very explicit not only the calling of believers to join the true church of Christ in the world and to manifest this church’s unity, but also the calling to separate from the false church (Art. 28). Concerning this false church, the Confession says that

she ascribes more power and authority to herself and her ordinances than to the Word of God, and will not submit herself to the yoke of Christ. Neither does she administer the sacraments as appointed by Christ in His Word, but adds to and takes from them as she thinks proper; she relieth more upon men than upon Christ; and persecutes those who live holily according to the Word of God, and rebuke her for her errors, covetousness, and idolatry (Article 29).

By clear implication, therefore, Article 85 of the Church Order warns against establishing official ecclesiastical relationships with denominations of churches that reject the fundamental doctrines of Scripture. We must not unite with churches that are not Reformed and that do not subscribe to the Reformed confessions. We must not cooperate in ministry with such churches. We must not join ecumenical organizations that include such churches that differ with us in essentials. To do so is to sin against the unity of the church and to sin against her Head, Jesus Christ. No Reformed church, for example, ought to be a part of the World or National Council of Churches. Unity, true unity, is founded on the truth of the Word of God, which truth is summarized in the Reformed confessions, the Three Forms of Unity and the Westminster Standards.

There is another implication to Article 85. That implication is that if ties exist with churches that at one time were faithful Reformed churches that differed with us only in nonessentials, but now it comes to it that an essential difference has arisen, the tie must be broken off. This is a real possibility. This has happened in the history of the PRCA. When this happens, work must be done to point out the essential character of the difference that has arisen. Discussions must be held. Exhortations must be given. Sufficient time must be allowed for instruction to sink in. And it must be clearly established that the difference is indeed an essential difference, a difference over the clear teaching of Scripture and a difference that concerns the Reformed confessions. There must be no breaking of official relationships over nonessentials, to be sure. But when it comes to the essentials, painful as it is, devotion to the truth and to Christ require the breaking of ties. Our relationship to Christ comes before our relationship to men. There may be no formal ecclesiastical ties with those who differ with us in the essentials of the Reformed faith.

But with churches who differ with our churches “merely in nonessentials” formal ties ought to be established. But what are these “nonessentials” that must not stand in the way of ecclesiastical fellowship? What are the determining factors and who decides? What is included in mutual acknowledgment? And what about the denominational committee that is directly involved in implementing all that is included in formal ecclesiastical relationships? These questions will be the concern of our next article. 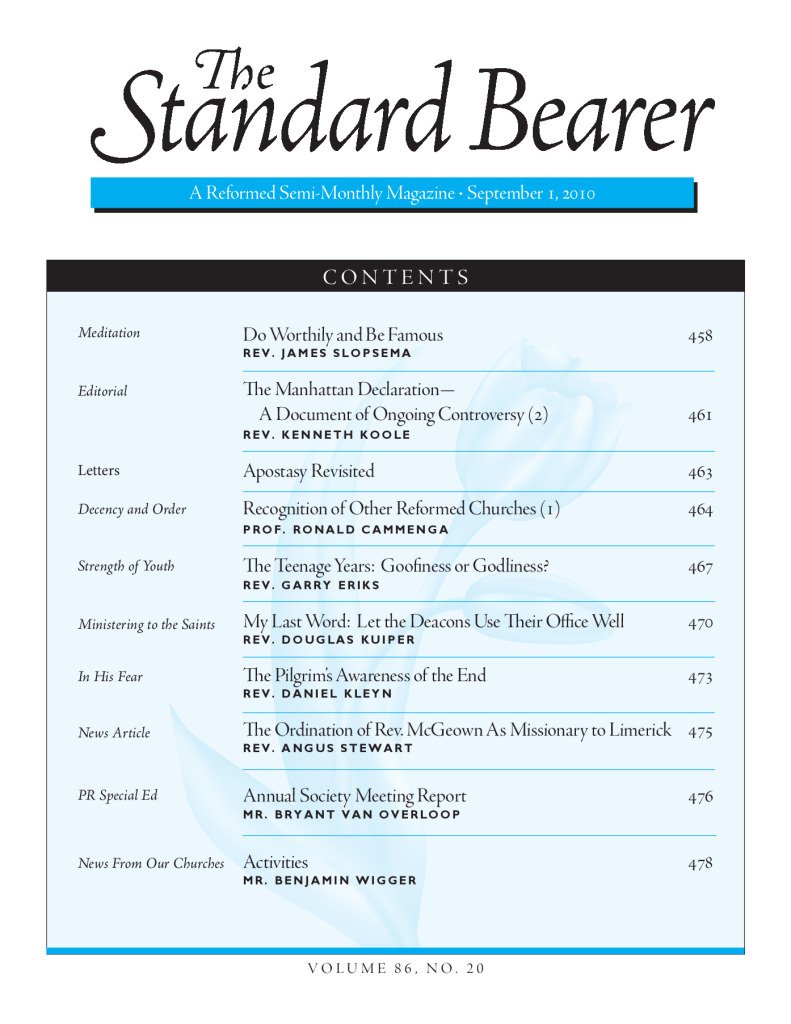