“For every creature of God is good, and nothing to be refused, if it be received with thanksgiving: for it is sanctified by the word of God and prayer.”

The relatively new Christians at Ephesus, where Timothy was serving as pastor, faced various errors. The devil is always attacking and seeking to divide! And he likes to make sinful extremes very appealing and seem so right. He has special delight in disturbing those who are young in the faith—such as were the saints at Ephesus. But thanks be to God for using these efforts of the devil as His way of bringing His children to greater spiritual maturity.

Some of the relatively young Christians at Ephesus yielded to Satan’s deceptions and concluded that it was good (and even necessary) to renounce all earthly things for the sake of their pursuit of the heavenly. They believed that holiness is found in abstaining from certain things that they judged to be evil in themselves. The examples given by Paul are: marriage and certain foods. Some today might add: certain clothes, alcohol, the use of Facebook, and such like. The list of things judged improper for a Christian was short for some. For others it was a very long list!

Paul knew the people well. He had ministered there at Ephesus for a few years. And he was well aware of Satan’s efforts to bring confusion and division wherever the Christian faith is found. Notice that he informs Timothy not to be surprised at these attacks, for God’s Spirit, through preaching and inspired letters, had warned that in the latter times some would apostatize from the faith. Further, the Spirit identified the attackers as seducing spirits and devils (I Tim. 4:1).

Then, by the inspiration of the same Spirit, the apostle advises his spiritual son Timothy how to instruct the saints with regard to these devilish attacks. Paul’s advice consists of two important points. First, “every creature of God is good.” This was God’s judgment after He had created everything: “And God saw every thing that He had made, and behold, it was very good” (Gen. 1:31). The good God created all things, and His work was good. And when Paul now writes this to Timothy, it is clear that the entrance of sin into the world does not change this. God’s creatures are still good. The fall into sin did not essentially change the creatures.

Therefore, every creature is good. Paul uses the present tense. It was the case at creation. It continued to be true in Paul’s day. And it remains true in our day. The reason is that sin is not in things, but in the heart of man. Real defilement is not physical, but spiritual and moral. Jesus taught this when He said, “There is nothing from without a man, that entering into him can defile him: but the things which come out of him, those are they that defile the man” (Mark 7:15). Jesus explained to His disciples, “out of the heart of men proceed evil thoughts, adulteries, fornications, murders, thefts, covetousness, wickedness, deceit, lasciviousness, an evil eye, blasphemy, pride, foolishness: all these evil things come from within, and defile the man” (Mark 7:21-23).

It is because every creature is good that Paul speaks of thanksgiving!

The second part of Paul’s advice is that the Spirit declares that every creature of God is fit for use by believers. They are to be received, not rejected (I Tim. 4:3), and to be enjoyed, for the living God “giveth us richly all things to enjoy” (I Tim. 6:17b). Sin is not in things, just as grace is not in things. Rain and sunshine in the right amounts, health and wealth, do not indicate, in themselves, divine love and favor. And sin and divine wrath are not in tornadoes, typhoons, cancer, or other things man judges to be bad. Good and evil are not in the creatures.

So we are taught by the Spirit to say, with important qualifications, that every creature is to be received. As any creature can be received to one’s spiritual hurt, so any creature can be received to one’s spiritual benefit and good. Again, good and evil are not in the creatures. In the new dispensation God has not forbidden the fruit of any tree, nor has He declared some creatures to be unclean. In fact, to show this to be the case, God even commanded Peter to eat what God had before said was unclean, declaring that God now had cleansed it (cf. Acts 10:10-15). And Paul is “persuaded by the Lord Jesus, that there is nothing unclean of itself” (Rom. 14:14). Further, Paul declares that “all things indeed are pure” (Rom. 14:20). Every creature is good, to be received and enjoyed!

The right manner to receive every creature is “with thanksgiving.”

Paul had just told Timothy that the devil would use some professing Christians to seduce into apostasy (I Tim. 4:1). These people might be well-meaning and well-intentioned, but the Spirit nevertheless identifies such activity in very harsh terms: their activity is “seducing”; they spread a teaching which is “of devils”; and they speak “lies in hypocrisy.” To teach and practice the conviction that certain creatures of God are inherently evil must be judged today with the same harshness. This form of legalism is very serious.

Paul instructs Timothy and the Ephesian Christians in the correct view. We are to see that God created each creature “to be received” as from God’s hand, with the purpose of using it for His glory. This makes all of God’s creatures to be gifts from Him. And this makes the creatures subservient to man, to be used by man for God’s glory.

The right way to receive God’s creatures is with “thanksgiving,” that is, in a conscious attitude of gratefulness. It acknowledges God to be the Giver of everything that comes our way. This makes us stewards of all that we are and of all that we have. The gift of God is Christ Jesus, who “came into the world to save sinners; of whom I am chief” (I Tim. 1:15; II Cor. 9:15). The attitude of thanksgiving praises and extols God in all His glorious virtues, and leads us to use His gifts to His glory and praise (cf. I Tim. 1:17 and I Tim. 6:15, 16). A heart of thanksgiving is so crucial for godliness. It frees one from all bitterness. Bitterness is that inner sourness that is caused by an attitude of coveting and jealousy because we believe that we have not received what we think is owed to us. Thanksgiving enables one to have the great gain of godliness with contentment (6:6). The ability to receive God’s creatures with thanksgiving is achieved by sanctifying them “by the word of God and prayer.”

God’s creatures are to be “sanctified.” The activity of just using them (over against abstaining from using them) is not sufficient. Use or non-use, in itself, is not enough. The use and the non-use must be to the glory of God. “He that regardeth the day, regardeth it unto the Lord; and he that regardeth not the day, to the Lord he doth not regard it. He that eateth, eateth to the Lord, for he giveth God thanks; and he that eateth not, to the Lord he eateth not, and giveth God thanks” (Rom. 14:6). “Whether therefore ye eat, or drink, or whatsoever ye do, do all to the glory of God” (I Cor. 10:31). This puts the use or non-use of everything into the realm of the spiritual. Strive to use every creature for Him, and not in a self-centered way. To do this we must learn how God would have us use the creatures He is pleased to give to us.

This is going to put us into the Word of God and on our knees in prayer. It is in God’s Word that we learn God’s purpose for His creatures. And it is in God’s Word that we learn how God would have His creatures to be used. Colossians 3:17 tells us how we are to sanctify God’s creatures: “And whatsoever ye do in word or deed, do all in the name of the Lord Jesus, giving thanks to God and the Father by him.” The Bible identifies us as redeemed kings of God’s creation in the service of God. So use each creature of God in His service. Specifically, Scripture declares that marriage is God’s institution, it is honorable (Gen. 2; Heb. 13:4), and it is a picture of the relationship God establishes with His elect. Scripture declares that meats are not to be rejected out of hand, as if there is holiness in not tasting (Col. 2:16-23), but they are to be used as gifts from God.

In addition to the Word of God, we are to use prayer to sanctify our use of God’s creatures. Prayer is a coming to God in order to confer with Him. It is a walking close to God so that we can sense the righteousness that God requires of His redeemed children, which inner righteousness exceeds the external righteousness of the Pharisees (Matt. 5:20). It is a living awareness of God and of His fellowship with us whenever we use one of His creatures. And then prayer will be the way we express our need for God’s help and blessing so that we can and do use His creatures correctly, namely, to His glory.

Let us use the occasion of a national Thanksgiving Day to be a God-given opportunity to use prayerfully God’s creatures to His glory and for our enjoyment. May God bless! 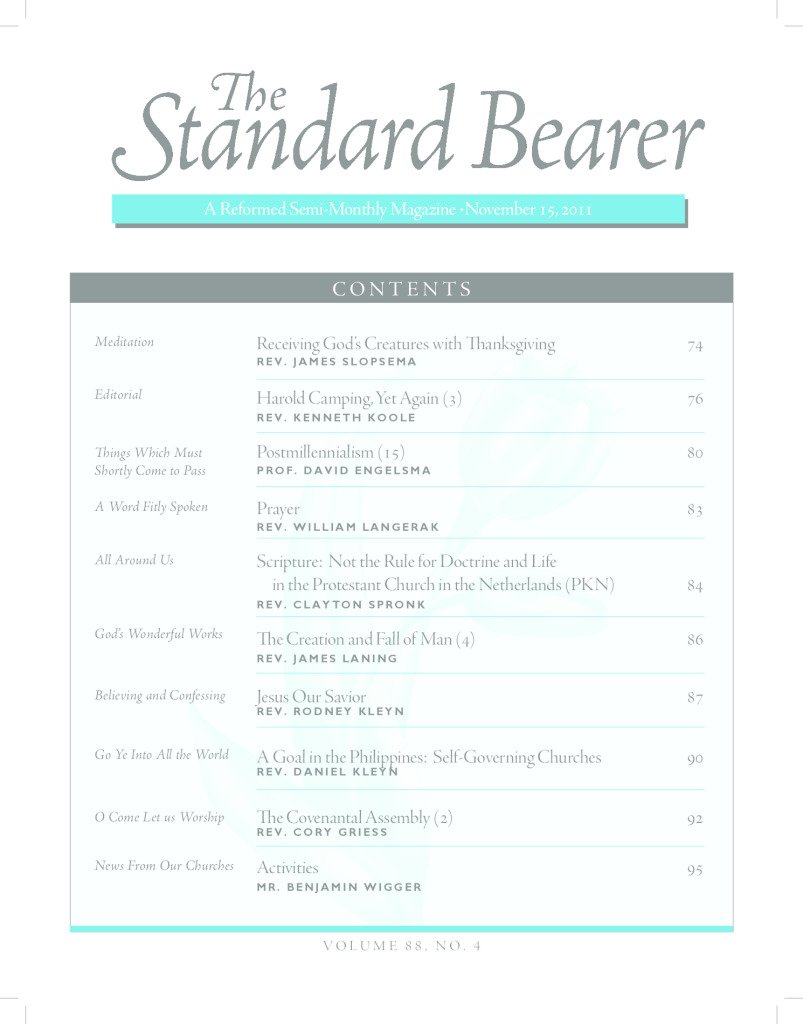