Reaching the Nations with the Gospel of Grace (An Evangelism Seminar in Houston, March 30-April 4, 1996)

Reaching the Nations with the Gospel of Grace (An Evangelism Seminar in Houston, March 30-April 4, 1996)

Rev. Miersma is home missionary of the Protestant Reformed Churches.

The Word of God in Mark 16:15 calls us to “preach the gospel to every creature,” that is, to proclaim the gospel to all who will hear without distinction, wherever God is pleased to send His Word. We are called to reach the nations with the gospel of grace. This calling we seek to carry out both here in North America and abroad as God gives us the means and opportunity, both by local church extension and as a denomination of churches through our mission work.

There is a difference between laboring among those who have heard the gospel in their generations and those who have not. It is not an essential difference, for the gospel which is to be preached is one and the same to all, but it is nevertheless a very real difference. Where the gospel has gone we are often confronted with small groups of believers who have had a form of the Christian gospel in their generations. They have come to or yet hold the pure gospel of the Reformation and are a remnant in the midst of a largely apostate post-Christian community.

This situation confronts us here in North America. Our society as a whole, by its European descent, has long known the Christian gospel and been shaped by it. It has also turned from it to its own imagination in willful unbelief and now in enmity seeks to suppress the truth of the gospel. It is a society of which Paul speaks when he says, “For the time will come when they will not endure sound doctrine; but after their own lusts shall they heap to themselves teachers, having itching ears; and they shall turn away their ears from the truth, and shall be turned unto fables” (II Tim. 4:3, 4).

We must see that God is working in a process of judgment in this apostasy in North America just as He did in the history of the church in North Africa, Asia Minor, and more recently in Europe. As He did with the natural branches of the Jews, God is also cutting off through unbelief those who have long stood in their generations in the olive tree of salvation as wild olive branches of the Gentiles (Rom. 11:9-21). It is but a remnant which are kept in their generations. Yet God is also sending the gospel to those who have never heard.

The result of this apostasy in the life of the Christian church also in the Reformed and Presbyterian community in North America is that we often meet those who are confused, misled by false doctrine, and spiritually drifting in their generations. They hold a form of the Christian faith mixed and confused with serious sinful errors of which they are unaware. They are not unlike the sheep of Israel of Jesus’ day over whom our Savior was moved with compassion, “because they fainted, and were scattered abroad, as sheep having no shepherd” (Matt. 9:36). Reaching the nations with the gospel of grace means that we have a serious calling to bring the gospel also to such wandering sheep who are departing in their generations and to labor to gather the remnant. This we are doing as churches in our mission labors with many scattered contacts, not only here in southern Colorado where I am based as home missionary, but also in the eastern U.S. in Cincinnati and Pittsburgh where I have also had opportunity to work on behalf of the churches this year.

We must not conceive of this calling, however, as merely the work of missionaries or ministers or the churches and evangelism committees. It is that to be sure. God gathers His church by faith through the Word preached. The church as the body of Christ is called to let its light shine in the world. But God uses the personal confession and witness of His people to draw men under the preaching of the Word to be saved. It was the personal confession of the Samaritan woman: “Come see a man, which told me all things that ever I did; is not this the Christ?” (John 4:29), which led the people out of the city and drew them to Christ to hear the Word preached (John 4:30). There is a living organic connection between that personal witness and its fruit in faith in Christ (John 4:39-42). Evangelism is the work of the church, but as such it is also the concern of every living member thereof, and that not only in prayer and support but also in personal witness. It is bound up with living a sanctified godly life in all gratitude that “by our godly conversation, others may be gained to Christ” (Heidelberg Catechism, L.D. 32, Q/A 86).

To return to that opening distinction, while we may distinguish, as we are called to reach the nations with the gospel of grace, between those who have known the gospel in their generations, as nominally Christian nations, and those who have not, the heathen, our mission work today does not. The recent labor in Myanmar, by the ERCS and Rev. Kortering, were with Christians seeking to know the Christian faith better, a remnant in a heathen land. Yet here in North America there are enclaves of immigrants from heathen lands who have never known the gospel with whom we must work.

This was vividly demonstrated at a recent evangelism seminar sponsored by Trinity Protestant Reformed Church in Houston. The theme of the seminar was “Reaching the Nations with the Gospel of Grace.” As part of its official work of church extension as a congregation, our church in Houston has been given an opportunity to preach the gospel to the Hindu community of Sindhi descent in Houston and to the Chinese immigrant community as well. While many today who have had the gospel in their generations will not hear, and will shrug off the Word in indifference, God has given Trinity an open door to speak His Word among those who have never heard the gospel in their generations. Some are recent converts who are just coming to know the historic Christian gospel of the Reformed faith, who have been taught the errors of the Arminians and Baptists or Roman Catholics. Others are yet heathens who have idols in their homes. But God has opened the door to preach among them the gospel of sovereign grace.

This was also the purpose of the seminar sponsored by the Christian S.I.N.D.H.I. outreach of our Houston church, as well as of my presence as missionary. While senior members of our churches up north who winter in Houston have been involved in aspects of this work, the purpose of the seminar was also to give some of our young people from Georgetown PRC an opportunity both to experience the work being done and to assist by their witness in it. (Houston has essentially the same weather as Florida in the winter, the same beaches in Galveston, and should be a destination for more of our senior members who must flee the cold, as it is a place where we have a church.)

The seminar consisted of preaching and teaching by Pastor Mahtani and me in the church, directed both to our young people and to the Sindhis invited to the meetings. It also consisted of our young people staying in groups in the homes of the families who are being worked with, both heathen and nominally Christian. It consisted, further, of going into the Hindu and Asian communities to meet with contacts and leave a witness by the presence of the young people with them.

The Lord also used the seminar to open doors to bring His Word both by the pastors present, whether in a shopkeeper’s office, in the presence of his idols, where the Word was proclaimed, or in after-recess discussions following the speeches and sermons. The young people by their group devotions in the homes in which they stayed were likewise given occasion to confess their faith. The families often sat in on their devotions, and these became discussions lasting into the late evening. Opportunity was also provided to confront error, as when what was supposed to be strictly an evening of recreation with one of the families became an occasion to confront the error of an Arminian “altar call.”

Several things stand out from the seminar. It is the Lord who opens the door both to preach and leave a witness. He has given such an open door to our Houston church. If we seek opportunity and fit occasion to confess our faith to others, God will give those occasions, according to His wisdom and in ways we had not necessarily foreseen. Our young people also have a place in such work. God is truly reaching the nations who have not known Him with the gospel of grace, also here in North America, not only in heathen lands. As the leaders gathered for prayer before the last meeting on Thursday night to bring the gospel to the Sindhis this was underscored. The nations of the Gentiles were represented in that gathering for prayer — Christian Sindhis, diverse European descendants, Afro-American, and Chinese. Seeking to reach the nations with the gospel of grace. This is the Lord’s great work. 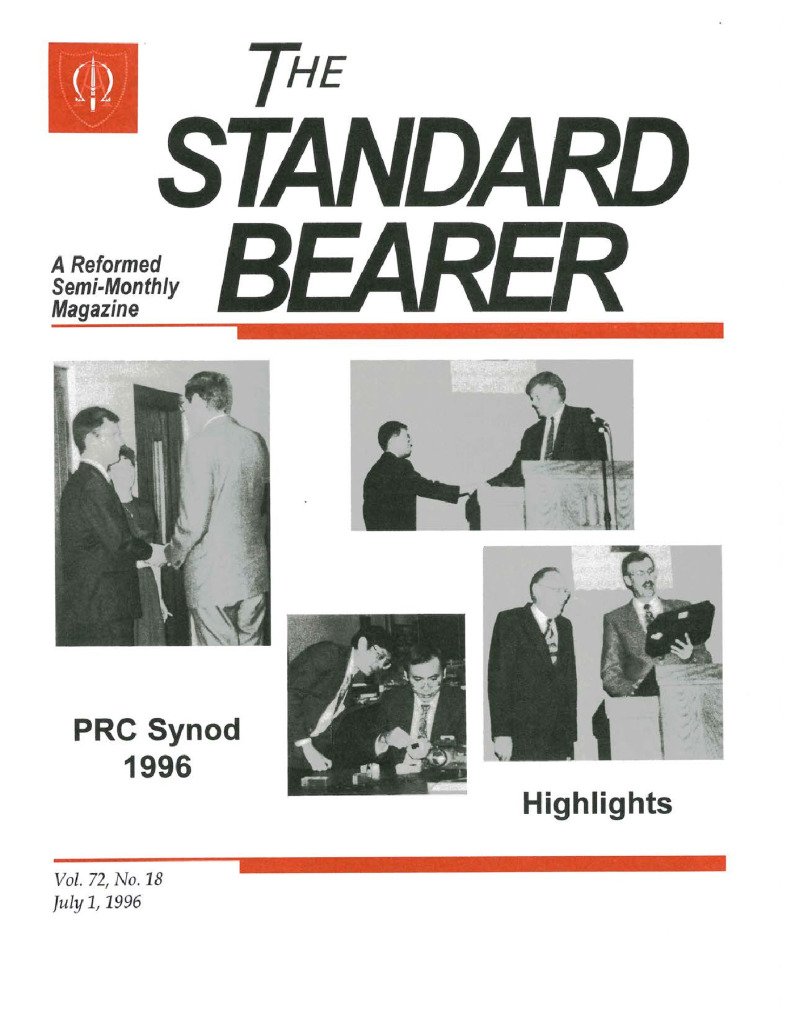