The rationalistic school of biblical criticism claims that in and after the Protestant Reformation the development of biblical textual, literary and historical studies was not possible because of the doctrinal bias and intolerance of the Protestant theologians. Romanism also hampered advance in this direction with its canons of the Council of Trent (1546), which prohibited not only other shades of interpretation, but thought other than that already imposed by the church. So, both Romanism and Protestantism had contributed to intellectual stagnation. Protestants with their insistence on the doctrine of justification by faith, and their basic principle of an absolute predestinarian theology were really no better than the Romanists with their papistical condemnation of the Copernican theory of the universe (1616), and the Inquisition’s denunciation of Galileo as “vehemently suspected of heresy,” together with hierarchical suppression of his scientific findings. This unbearable condition promoted by these two almost antipodal circles kept the churches for centuries in a bibliolatrous strait-jacket.

This attitude is still reflected against the investigator who stands in the line of the Reformation, regarding him as a serious hindrance to free thought, and a naive, surreptitious and half-baked would-be student as compared to the intelligent, logical, comprehensive and scholarly critic. This contention is not altogether without foundation in fact, as often the orthodox champions of Scripture have either ignored or underestimated the rationalistic principles of interpretation. Doing this is to err, rendering it impossible to learn the enemy position of “higher criticism,” and, consequently, to understand the more modified and subtler position of contemporary enemies. He is a poor soldier of Jesus Christ who neither knows nor cares where and how the enemies of Scripture truth are emplaced. While he withdraws to the snug (smug?) security of his “Maginot” (imagined invulnerability), the enemy out-flanks, by-passes and undermines his whole cause. He has made it easier for unbelief in its innumerable forms to infiltrate the ranks of the church, and experiences a defeat without a battle. Truth is fallen in the street! Faith in the Word of God is lost, the Christian world-and-life view blown away by the confusing winds of philosophical inanities. Many churches are like a citadel which may still stand, but with the sentries gone, the munitions plundered, the warriors dead—a mere shell. The kernel of truth has been surrendered in the interest of conformity to the world. Taking the whole armor of God requires knowing your sword and your enemy!

At the outset we must distinguish between biblical criticism and biblical investigation. Critics of God’s Word we are not; but rather investigators of it. Mere men cannot actually criticize the Word, but, instead, are criticized by it, since it is a “discerner (critic) of the thoughts and intents of the heart” (Heb. 4:12). We are commanded to investigate the Word, “Search the Scriptures . . . for they are they which testify of Me.” The purpose of such investigation is not to determine whether the Bible is trustworthy, but to apprehend the gift of eternal life (John 5:39). Study of Scripture, then, is not criticism, but biblical research.¹ The Christian researcher confesses, “I believe, therefore I investigate.” The critic says, “I investigate in order to determine whether I shall want to believe.” Biblical criticism endeavors to determine whether the manuscripts of the Scriptures are historically objective and accurate, whether the various books were actually written by the alleged authors, whether the writings originated from the times they have been thought to have originated, and to completely rationalize (humanize) the supernatural Christian faith.

1. Its Origins and Development. The origin of this method of interpreting the Old Testament began with Astruc, a Paris physician to Louis XIV (1753), who assumed that Genesis was written by two different authors. He drew this conclusion from the interchangeable use in Genesis of the two divine names, Elohim and Jehovah. Later, Eichorn (1781), independently of Astruc, also thought there were two distinct manuscripts which composed Genesis, and supposed them to be distinguished not only by these names of God, but by two distinct, separate literary styles and vocabularies. We shall show how untenable this is. But this general idea was further advanced in De Wette, who added the contention that the Book of Deuteronomy was so different in style and vocabulary from the rest of the Pentateuch that it could not possibly have been written in the Pentateuchal period, in fact, no earlier than Josiah’s reign, and so is a “pious fraud.” Deuteronomy, to this evolutionary critical school, was too literarily advanced to be from the time of Moses.

In 1853, Hupfeld theorized that Genesis was composed in part by a priest-contributor, thus suggesting a third writer in addition to the aforementioned authors. Astruc designated his supposed writers as E and J, for an Elohistic writer and a Jehovistic writer, the former presumed to be the earlier,² dating, as was theorized, not from Moses’ day, but near to the period of the judges. Hupfeld designated what he felt was the priestly section of the book P, and dated it as coming from the exile.

Graf, in 1856, claimed that the middle sections of the Penteteuch were written in the period of the exile. Wellhausen, agreeing with Kuenen and Riehm, adopted the hypothesis that all the Elohistic sections of the Books of Moses came from the post-exilic period. This became the basis of the Graf-Wellhausen theory of German “higher” criticism, i.e., literary criticism.

Vater came up with the idea that the five Books of Moses, particularly Genesis, were constructed from some major documents not only, but also from many smaller, disconnected fragments. Not only did he conceive of such compositions as E, J, P, etc., but also thought of E as not actually one sole contributor, but as representing at least four more of the same Elohistic school, so that we have E¹, E², E³, and E4 documents. Later scholars, addicted to this same fancy, saw in the J sections not only the work of one single Jehovistic writer, but what they assumed to be evidence of multiple authorship, and so designated J¹, J², J³, J4. Other scholars also designated the P sections into different P categories as P, Pg, Ph and Ps. Besides these subdivisions there were also parts of Scripture thought to be of a combined JE structure.

All this hypothesis is ostensibly traceable through complicated fabrications running throughout the Pentateuch. This is the partitionist or fragmentary theory of Scripture. It was subsequently emphasized as the documentary theory. These fragments were pieced together, Chinese puzzle fashion, by a string of unknown editors called redactors, and designated R, which eventually came to represent a myriad of compilers of almost astronomical proportions. In this way, no part of the Bible has been left untouched by the rationalist critics, but has been so shredded that it is no longer in that condition recognizable, understandable or respectable.³

More recently, all these previous theories have given way to a certain extent to another, which divides the books of the Old Testament into two basic parts, the one identified by the singular pronouns (thou, etc.), and the other by the plural pronouns (ye, etc.).

But does the employ of such grammatical construction point to two different documents (or authors, writers) of Scripture? May not the discourse, when in the plural, be directed to the entire organism of the church, and when using singular terminology be directed to the individual? There is no necessity in assuming double (multiple) authorship of the books of the Bible.

We may trace this dismembering of Scripture to the English 17th century naturalistic Deism, to French revolutionary skepticism, to American 18th century rationalism, 19th century “scientific” liberalism, and to 20th century pragmatic atheism. The destructive criticism, by whatever disguise it may wear, persists to this day, never having been entirely eradicated.

Still closer to our day, some scholars have used the designations J, E, D (Deuteronomy code) and P, but by them not the dusty Wellhausenianism is intended. What is intended is not early, middle and later periods of religious development, but rather various circles of tradition which existed simultaneously, contemporaneously, each having its own particular emphasis. Thus none of these four bodies of tradition, although all ancient, is more ancient than the other. But this trend of the theory is not generally accepted.4

2. Its Method and Result. The composition of Scripture was conceived of as a conglomeration of patched and repaired myths, confused traditions, strange fancies, actual mistakes, and continual (year by year, century by century) emendations appended to or inserted in the text. The implication was that the compilers and authors, J, E, P, D and R, and their various subordinates, though separated by time and place, and having nothing in common as to theme, thought, history or life development, yet had a basic commonality in forgery. It was the work of R (the redactor, the editor) to put all these fragments of fragments into some sort of order, making constant additions of his own, even transposing entire sections, in order to give a semblance of unity to the documents, thus attempting to weld together a harmonious whole.

There were said to be as many different authors of any one book as there were language differences and vocabulary distinctions.5 The expression “male and female” was said to have been penned by one writer, E, whereas a similar expression, “a male and his female,” was regarded as the peculiarity of the other writer, J. Does this theory of a long dynasty of ghost writers have sufficient evidence to entrench it firmly against the possibility of valid challenge? Are there not many instances in the literary field where a given writer is most fertile and proficient in the use of synonyms? Is it not the purpose of synonyms to present principally the same meaning, but with a different shade of thought? It depends upon what the writer had in mind when he wrote, “a male and a female,” or “a male andhis female,” or whether simply, “man and woman.” Upon what authority, or for what earthly reason, are we bound to believe, as the critics claim, that no one man can be the author of two different styles of writing? 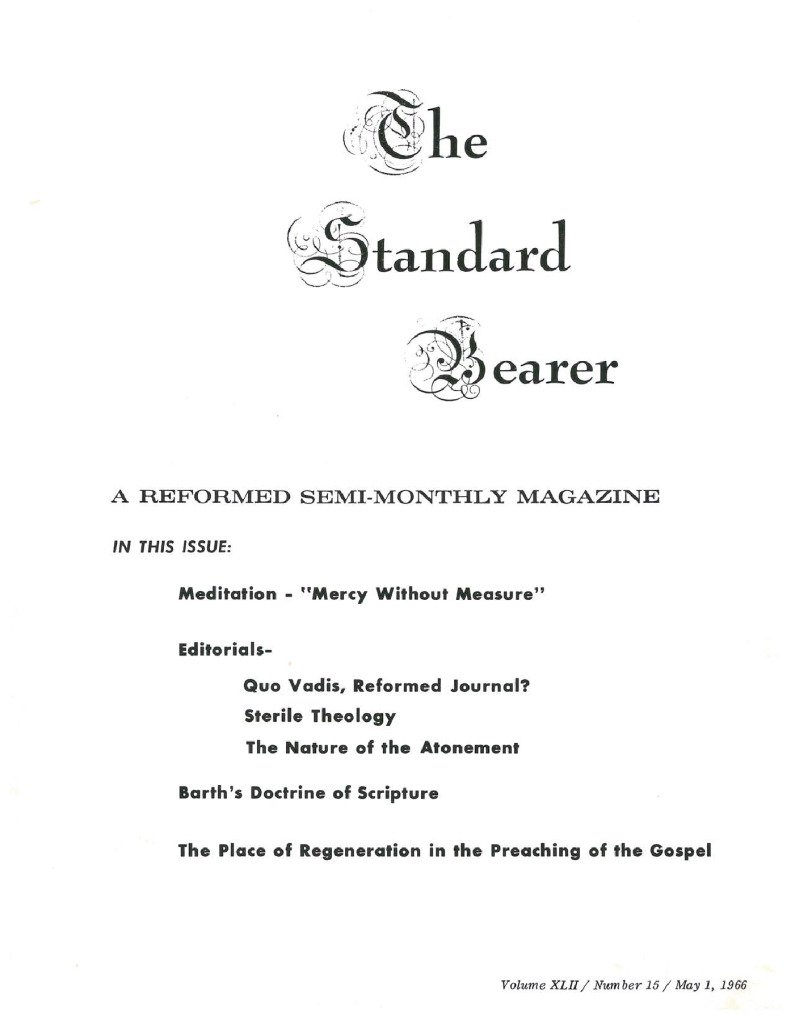