It is with some hesitancy that the author of these lines undertakes to write on the above-captioned subject and that for two reasons, which both hinge on the nature of the subject. The first is the awareness on the part of his own limited background in the field of this subject. The writer considers himself a novice, one without broad reading knowledge and matured judgement. This does not mean that this article will not reflect the conviction of the writer. On the contrary, the writer is firmly convinced that the lines drawn in this article lead us in the right way for our Christian thinking. Another reason for hesitating to write this article, is that not too many readers of the Standard Bearer will in all probability enjoy an article of this nature. One does not relish writing an article, which at best, very few read. However, since I entertain the secret hope, that at least my minister-colleagues will be interested in this subject, plus our theological students, I will proceed in the attempt of a treatment worthy of the subject.

Looking at the formulation of the subject, we notice that it is stated in the most general form. If treated in its full scope and import, literally books could be written on the subject, as indeed, there have been. Our discussion must therefore of necessity be limited to one distinct phase of the subject.

Permit me to affirm at the outset, that, as will be evident to the careful observer the terms “Rationalism” and “Christian Logic” have something in. common. For only that which has something common is easily confused. However, I hasten to add, that these terms are not identical in their denotation. Both proceed from a very distinct principle and motivation. And, as we shall undertake to demonstrate, they are in their methodology diametrically opposed.

It is to this distinctiveness of “Christian logic’ as distinguished from “Rationalism” that I solicit your attention.

That there is great need of clarification on this point, none who have given serious thought to this matter would deny. This is true, when taking the subject in the abstract, and considered apart from any concrete case in point. It is the sine qua non of all correct reasoning and debate. During the past decade and a half, time and again the need of clarification became obvious in the common-grace controversy. Repeatedly the Rev. H. Hoeksema c.s. were accused of “rationalism” when they insisted that Scriptural truths were not self-contradictory. As recently as 1941 Dr. G. Van Til spoke in his paper on “Common Grace” in this tenor of the stand of the Revs. H. Danhof and H. Hoeksema, while it must be said, that Van Til stated that the stand of the Synod of 1924 was that irrationalism.

In the light of these facts, serious minded persons who are not satisfied with a bald assertion, and who nevertheless wish to know the truth and meet the challenge, are necessitated to place themselves before the question: Is the insistence on Logical Consistancy tantamount to “Rationalism”?

Hence, our task at hand is clear. A proper treatment of this matter will necessitate a clear-cut definition of the “terms” in our subject. Should one disagree with our definitions on good grounds and authorities, we, of course, stand corrected. We will therefore first define the term “rationalism” and then “Christian logic”.

What is the common opinion of the parennial philosophy called “rationalism”? I will quote from “Fleming’s’ Vocabulary of Philosophy”. On page 420 we read: “RATIONALISM, in philosophy, is opposed to sensualism, sensuism, or sensism, according to all which, all our knowledge is derived from sense. It (rationalism, G.L.) is also opposed to empiricism, which refers all our knowledge to sensation and reflection, or experience. According to rationalism reason furnishes certain elements, without which experience is not possible. . . The reader does well to bear in mind, that the distinction between these views “in philosophy” is not religious at the bottom at all, but is a question of the relation between the subject and object, of knowledge. Both deny the need of revelation. The beginner in studying philosophy does well to bear this in mind.

It is to this latter fact, that Dr. H. Dooyeweerd has reference when he calls this entire system, which does not reckon with God’s revelation in Christ, ”Immanentie-Philosophie”. Writes Dooyeweerd: DUTCH REMOVED. Wijsbegeerte Der Wetsidee, Deel I, page 17.

They all fall under the verdict of not asking for the light of revelation. We have in mind “rationalism also in this broader sense of the word. Very aptly this is defined in Fleming’s Vocabulary of Philosophy as follows: “Rationalism, in religion, as opposed to supernaturalism, means the adoption of reason as our sufficient and only guide, exclusive of tradition and revelation.”

To this we can add the judgment of Dr. H. Bavinck, in his Gereformeerde Dogmatiek, Deel I, Paragraaf 7 where he treats of the “Principia In De Wetenschap”. Writes he: DUTCH REMOVED. To state it more concisely and clearly than it is stated by Bavinck is not well possible. It gives us rationalism in a nut-shell.

We now turn to defining the term “Christian Logic”.

Turning to the term christian logic, it is imperative that we first define the term “logic”. For a correct understanding of this entire matter, it is of primary importance to distinguish between “Pure” or “Formal Logic” and “Material” or “Applied Logic”. Formal logic is a science, dealing with the Laws of correct thinking. It “is conversant only with the Pure or Formal Laws of thought, and does not concern itself with the material truth of any proposition, “Material Logic” is conversant with the material conceptions of various sciences and endeavors to apply formal laws to the attestation of truth or knowledge.”

The modifying term “Christian” in our subject also must be defined. We do not believe that there are Christian “laws of Thought as Thought” in distinction from non-christian laws. Regeneration is not a new “faculty”, but it gives a new “habitus” to the mind and will. The Christians mind is of “one blood” with the non-christian in the Formal processes of Thought as Thought. The laws of correct thinking are not an arbitrary asset, but they belong to the very nature and fabric of the mind of man. I am now speaking of “Formal Logic”. Both Christians and non-christians must think. “Thought” is logical. It is always the predicating of something to a subject (object?). It deals with “conceptions”, the forming of “judgements” and further of “reasoning”.

All these elements of Formal Logic are both in “Rationalism” and in “Revelational-Thinking” i.e. one having the content of his thinking determined by God’s revelation. To see the distinction we must, turn to the Applied Logic in the concrete and practical. We must turn to Logic as an “art”.. The one Scripture denominates as the “minding of the flesh”, the “natural mind” and other is the “spiritual mind”. We here have man in the Actual thing processes, in the “conceptions formed” the “judgements made”, as these are determined either by faith in the Son of God or unbelief and disobedience to the Son. The question is a religious one at the bottom. This appears from such classical Scriptural passages as John 7:17, “If any man willeth to do this, he shall know of the teaching, whether it is of God, or (whether) I speak of Myself”. Rom. 1:18-23 speaks for itself as does also Eph. 4:14, 17-19 and II Peter 3:5.

I believe that the difference between “rationalism” and “Christian Logic” can be demonstrated by formulating two syllogisms. Rationalism says: The logical is true. The Christian says: Revealed truth is logical. The concepts “truth” and “logical” are not interchangeable as subject and predicate. The following will demonstrate this.

1. Light is a creature. 2. God is light. 3. God is a creature. This is perfectly logical, but it is not true. Do I know this from the syllogism? No, only from the Word of God, His revelation

Here is a syllogism which is also logical and true. 1. All creatures are dependent. 2. Man is a creature. 3. Man is dependent. How do I know this to be true? Because it is logical? No, because the Word of God teaches it. I read this in such passages as Col. 1:11, “and in Him all things consist”. Also in such passages as Matthew 6:25-34 and Acts 17:28 where we read: “in Him we live and move and have our being.” Christian logic does not believe that the Bible affirms and denies the dependency of the creature, and that both would be true. Scripture study does not lead to logical absurdity!

We confess the Articles of Faith our belief in God triune, that is that He is one in essence and three in persons. Is this logical? Strictly logical. Do we therefore confess it? No, we do not. We confess this even as it is so singularly stated in question 25 of the Heidelberg Catechism. “Because God hath so revealed Himself in His Word, that these three distinct persons are the one only true and eternal God”.

In the “Ninety Nine Theses” Luther says (47) “Nulla forma syllogistica tenet in terminus divinis”. No syllogistic form is of force (normative value) in Divine terms. Luther evidently is employing technical language when he speaks of Divine terms. We understand “term” to mean “concept” and as an active process in the mind “conception”. Says James . Hyslop in the above named work “For the purposes of Logic a concept is the same as a term. In itself it is to be viewed from the mental side, and represents the ideal rather than the symbolical element in thought”. We take a “term” to be an expressed “concept” Again (48) “Non Tamen ideo sequitur, veritatem Articuli Trinitatis repugnare formis syllogisticis”. It does not follow, that the truth of the Articles of the Trinity conflict with the syllogistic forms.

That the great reformer distinguishes between Christian Logic and Rationalism is clear from (49). “Si form syllogistica tenet divinis articulus Trinitatis erit scitus et non creditus,” We translate: If the syllogistic form has force (validity as a criterion of truth G. L.) in the Article of the Trinity it would be knowledge and not faith. Therefore Luther proceeds to tell us, that Aristotle cannot help us in the “art” of Logic. He has only syllogistic forms, but no “divine terms” i.e. concepts, such as God, creation, sin, the law of God, the Covenant etc. Says Luther (50) “Brevifer, totus Aristotel ad theologiam est tenebrae ed lucem. Contra Scholasficos.” i.e. Briefly the whole Aristotle is to theology what darkness is to light. Again he says (53) “Usitatiores definitiones Aristoitelis videntur petere princ ipium”. i.e. The more used definitions of Aristotle seem to beg the question.

In conclusion permit us to remark, that to determine whether one is a rationalist we must not ask, whether one wishes to maintain Logical Consistency or not, but whether the concepts employed are those which God has revealed in a given case. Taking rationalism in the broader sense (see above quotation from “De Wijsbegeerte Der Wetsidee”) those maintaining the irrationalistic position of the self-contradictory fall under the verdict of rationalism. It reflects confused thinking to identify ‘logical consistency” with “rationalism”. It is not at all impossible (that those maintaining “Contradictions” in Scriptural concepts are rationalists.

May these efforts in some measure clarify our thinking. 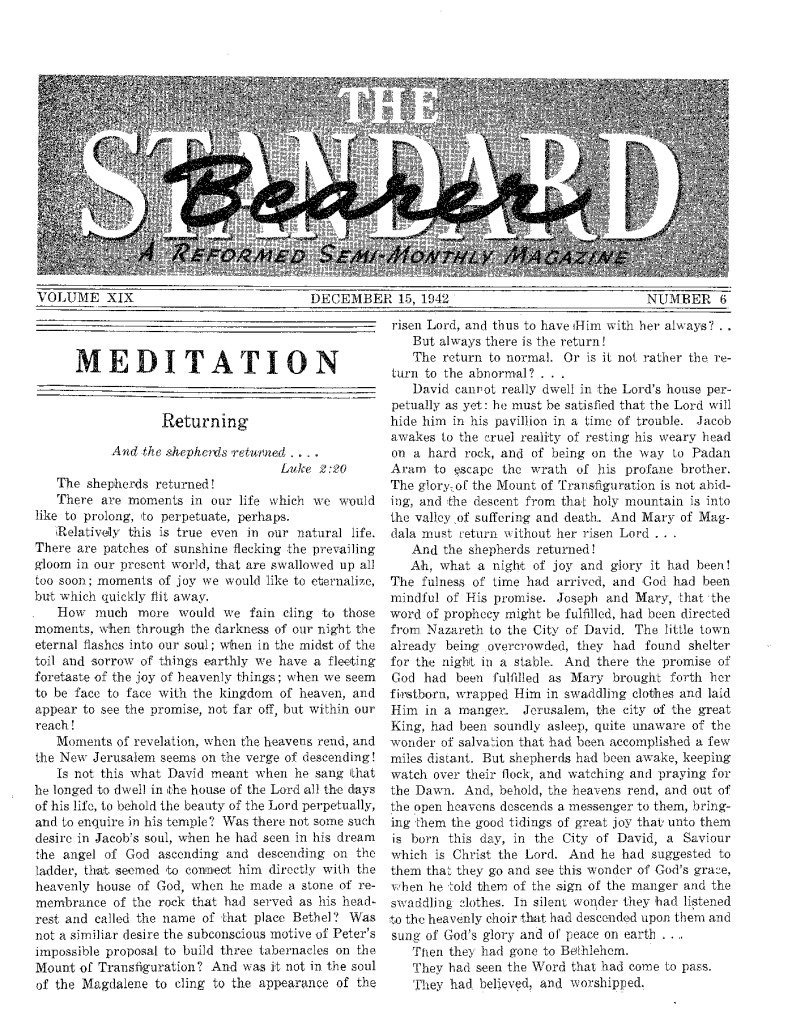