Elsewhere in this issue we made reference to theReformed Journal’s propagating of rank universalism, be it through the pen of a non-Christian Reformed writer. The reference was to the July-August issue, in which an article by Gracia Fay Ellwood appears. The article is entitled “Birth of a New World.” On page 2 it is introduced as follows: “The article “Birth of a New World” was originally a sermon preached in St. John’s Episcopal Church, Los Angeles, on December 6, 1970. Gracia Fay Ellwood is the author of Good News from Tolkien’s Middle Earth (1970), two essays exploring the mythical world of the trilogy The Lord of the Rings. She holds the M.A. degree in theology and literature from the University of Chicago Divinity School.”

There is much in this so-called “sermon” which could be criticized. In fact, there is no gospel in the entire article. But here is the section, at the end of the sermon, to which we had reference:

“What sort of supernormal events shall we look for? Our creed says that Jesus will return in glory, and that his Kingdom shall have no end—that is, no limit, for he is Lord of all. I am not sure just what it means that Jesus will return, but we can be sure that it means more, not less, than the wildest and most beautiful thing ever imagined. If his Kingdom shall have no limit we can expect that every moment of past time will be transformed; that is, every human being that ever lived, every animal, every blade of grass will be revealed as transformed and charged with the glory of God.

“Let us hasten the great day! For he is able to do far more abundantly than all we ask or think!”

I have reference especially, of course, to the statement that “. . . every human being that ever lived . . . will be revealed as transformed and charged with the glory of God.”

Perhaps some would excuse such rank heresy from the Reformed Journal by means of the statement in the masthead, “The comments and opinions published in the Reformed Journal are not, by reason of that fact, necessarily shared by the publisher, or every member of the editorial staff, or every non-staff contributor, or every advertiser. Moreover, no one, unless he expressly so states, presumes to speak in the name of any business firm, school, church, institution, person or group of persons.” A very neat negative statement!

Yet the following facts remain:

1) On its cover the Reformed Journal calls itself “A Periodical of Reformed Comment and Opinion.”

2) Someone, presumably the editorial staff (?) must have decided to place this article in this “Periodical of Reformed Comment and Opinion.”

One tends to expect almost anything in the Reformed Journal—anything, that is, except Reformed comment and opinion

But this universalism is about the worst thing they have published recently.

I would like to see a repudiation by a responsible representative of the Reformed Journal, and, along with it, some thorough-going “Reformed Comment and Opinion” about the entire miserably modernistic article.

Or do the members of the editorial staff (Harry R. Boer, James Daane, Lewis B. Smedes, George Stob, Henry Stob, Nicholas Wolterstorff) agree with this modernism and call it “Reformed Comment and Opinion?” Let them say! 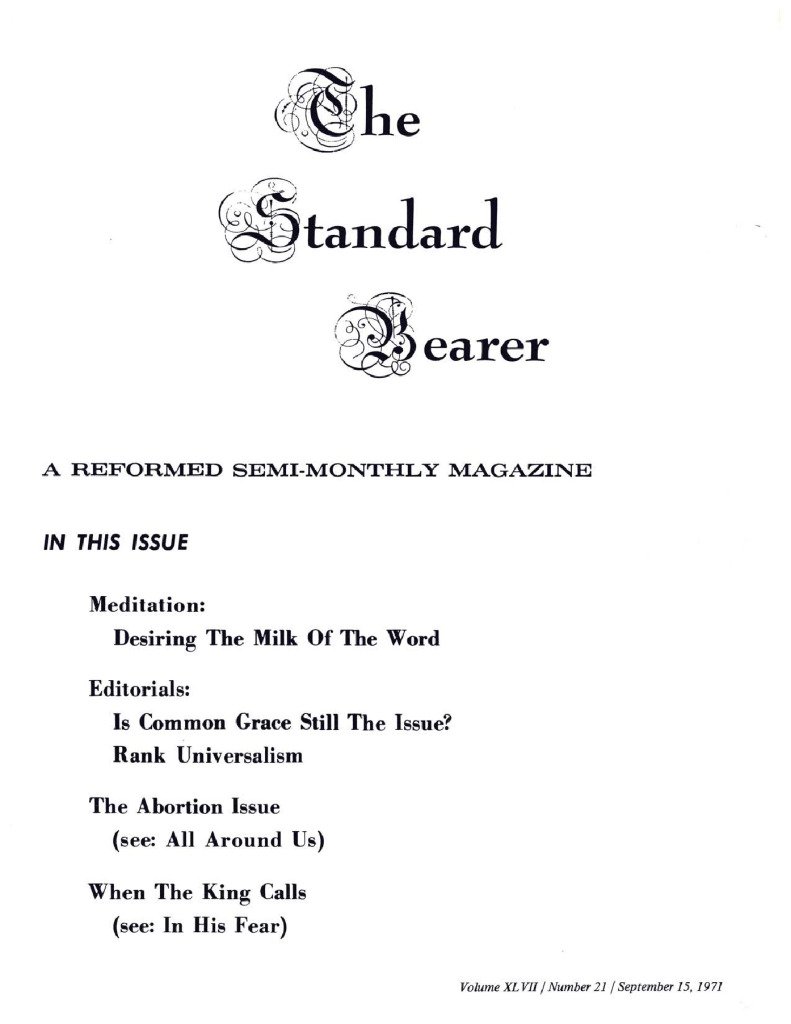