In our previous article we learned that 14C atoms transform into more stable atoms (14N) by giving off a form of radiation called beta radiation. And since the rate of transformation (rate of decay) is a known value, scientists use the amount of 14C still remaining in a substance to determine its age. This method is one of many types of radioactive-dating techniques.

Using radioactive-decay techniques, unbelieving scientists draw conclusions about the age of the earth that contradict the teachings of Scripture on this matter. The unbelieving world often seeks to attack the teaching of Scripture with an appeal to the flawed conclusions of science in order to deny the God revealed in the Scriptures. Their use of radioactive dating is no exception. Therefore, a biblical answer to such an attack is not only warranted but necessary. To a biblical view of origins and a biblical evaluation of 14C dating we now turn our attention.

Secular scientists base their work on the assumption that the natural processes they observe are self-govern­ing processes that have always worked the same way, without interruption or disruption, since the origin of the world. This assumption is called “Uniformitarian­ism.” In II Peter 3:3-4, the Holy Spirit clearly refers to this: “Knowing this first, that there shall come in the last days scoffers, walking after their own lusts, and saying, Where is the promise of his coming? For since the fathers fell asleep, all things continue as they were from the beginning of the creation.” We ought to con­sider this passage in evaluating secular scientists’ ‘proof’ for the age of this earth. What we see today is not the world as it has always been, but a world affected by the Flood (as well as the Fall, although we focus on the Flood for the purpose of this article). The truth of the Flood renders invalid secular scientists’ conclusions that are based on the assumption of Uniformitarianism.

A secular archeologist, for example, uses the princi­ple of Uniformitarianism to predict the age of the earth. Scientists have observed for many years how wind and rain run-off erode soil and rocks. Based on the rate of erosion that is currently observed, the scientists back-calculate to determine how long it must have tak­en to erode a canyon deep into the earth’s crust. It is on the basis of such calculations that the scientists estimate the age of the earth.

Similarly, in order to predict the age of an artifact, scientists assume that the rates of deposition of 14C have remained constant and unaffected over the entire histo­ry of our world. Apart from this assumption, it would be impossible to use the 14C dating method to determine with accuracy the age of an artifact made out of biolog­ical materials.

Effect of the flood

The teaching of Uniformitarianism—the assumption that all natural processes have existed in the same way and form as they always have without interruption—is an erroneous assumption. Such an assumption does not acknowledge a sovereign God who rules by His Word in all creation (including words of judgment on the wicked world and words of miraculous deliverance for His people throughout history), and therefore, denies the biblical teaching of the Flood and its catastrophic effects on the world. After describing the fundamental principle of Uniformitarianism in II Peter 3, the Holy Spirit identifies what underlies the thinking of those who hold to it:

For this they [the scoffers of v. 3 who teach Uniformitarianism, v. 4], willingly are ignorant of, that by the word of God the heavens were of old, and the earth standing out of the water and in the water: whereby the world that then was, being overflowed with water perished: the heavens and the earth, which are now, by the same word are kept in store, reserved unto fire against the day of judgment and perdition of ungodly men” (II Pet. 3:5-7).

The Holy Spirit teaches here that it is the judgment and rule of the sovereign God of creation that ungod­ly scoffers willingly deny. They do not want to hear the inspired words of the apostle that as the pre-Flood world was destroyed in the judgment of God by water, so the current world will be destroyed in the judgment of God by fire. They suppress the truth of God’s judg­ment, in part by denying that the picture of it ever hap­pened. As there was no Flood, so also will there be no final judgment.

II Peter 3:5-7 is clear: the pre-Flood world and the post-Flood world are different worlds. To assume that everything we observe now has existed in the same way and form since time began, without interruption or dis­ruption, is an error. The truth is that the natural pro­cesses and structures that we observe today have been affected by the Flood. Therefore, we must be very care­ful not to view the pre-Flood world through post-Flood ‘glasses’—making assumptions about what the creation was like based only on what we observe in the creation today.

Knowing that the pre-Flood world was different from the post-Flood world is important in evaluating radiometric dating. The biblical record of the Flood describes a catastrophic interruption of the natural processes of the world that then was. Changes to the earth caused by the Flood could very well have impacted the deposition of 14C. How much and to what extent the pre-Flood world was a different world we do not know. But it was a world distinct from today’s world. This testimony of the Holy Spirit alone gives us pause when we consider the conclusions based on 14C radiometric dating. On the basis of II Peter 3, we can only conclude that a determination of the age of archeological artifacts that precede the Flood is beyond the reach of scientific measurement.

Due to the relatively short decay rate of 14C, scien­tists generally use it to determine the age of artifacts but use the radioactive decay of other elements to date the earth. While it is not the purpose of this article to enter into a description of all these other methods, the assumptions of Uniformitarianism that apply to 14C dating also apply to these other methods. The conclusions drawn from the use of other radiometric-dating tech­niques that the earth is 4.5 billion years old are likewise invalid, because such conclusions do not consider the clear testimony of God’s Word about the Flood. Be­sides, the teaching of Scripture, which we by the grace of God believe by faith alone, is that the earth is only a few thousand years old.

Hardly, however, is it true that, on the basis of II Pe­ter 3, we reject all use of 14C as a tool for dating artifacts. There is order in creation. Since God is a God of order and is an unchanging God, He illustrates that truth to us by providentially maintaining this creation in an or­derly and unchanging way. Day by day, for example, the sun completes its circuit in a precisely repeatable fashion. Year by year, the seasons change in a regular manner. Meteorological conditions can be measured, and, with remarkable accuracy, weather forecasters can predict the next week of weather for a particular area. These predictions can be made because the natural pro­cesses, mechanisms, and structures of creation are gov­erned by the immanent God every moment of the day in an orderly way.

Therefore, it is a proper assumption that 14C deposi­tion occurs in a very similar way today as it always has since the Flood. Thus, it can be helpful in determining the age of an artifact, within the past 4,000 years or so (that is, post-Flood). Any conclusion made using ra­dioactive-dating techniques that predicts an artifact to be beyond the date of the Flood is invalid, because it is based on the faulty assumption that the radioactive-decay process has always existed without interruption or disruption. Simply stated, such conclusions are invalid because they, in essence, deny the Flood and its effects on the creation.

The blessed gift of faith

Uniformitarianism, which denies the Flood and its effects, is a serious denial of our sovereign God. Many, even in the church world today, have succumbed to this lie. In an attempt to harmonize biblical truth with secular science, many compromise the truth. The danger is real. Pray for grace that we might recognize our own sinful natures and inclinations, realizing that we ourselves are not immune to the lies of the devil. “Wherefore let him that thinketh he standeth take heed lest he fall” (I Cor. 10:12).

The words of the Holy Spirit, through the apostle Peter, testify clearly of the Flood and of a world that “then was” and a world that “now is.” In light of God’s faithful, inerrant Word we must carefully evaluate all conclusions of secular science. As children of God who have faith, we do not fear scientific investigations or the tools of science, but continue to search out and marvel at God’s work in the creation. And as we investigate God’s creation, we arrive at significantly different con­clusions than secular science because we have the Spirit of Christ in us and our study of creation is enlightened by the Word of God. May God continue to give us the grace to believe the testimony of His Word regarding the origin of all things and the truth of the Flood. Apart from the precious gift of faith, we all would believe the error that all things continue as they were from the beginning of the creation. Thanks be to God that He has graciously given us trust in His Word!

Finally, by faith we are comforted knowing there is a sovereign God, who speaks an effectual word. Whether it be the world that then was or now is, all are kept (reserved) by that same word—the Word of God. He speaks, and all things are created. He speaks, and all things continue to exist. And, as the God “who hast according to [His] severe judgment punished the unbe­lieving and unrepentant world with the flood, and hast according to [His] great mercy saved and protected be­lieving Noah and his family” (prayer in our Baptism Form), so He speaks today, preserving us unto the great day of deliverance and executing His sovereign will and good pleasure for the glory of His precious name and the salvation of His beloved church. Praise Him for His sovereign and effective word! And praise Him for the blessed gift of faith! 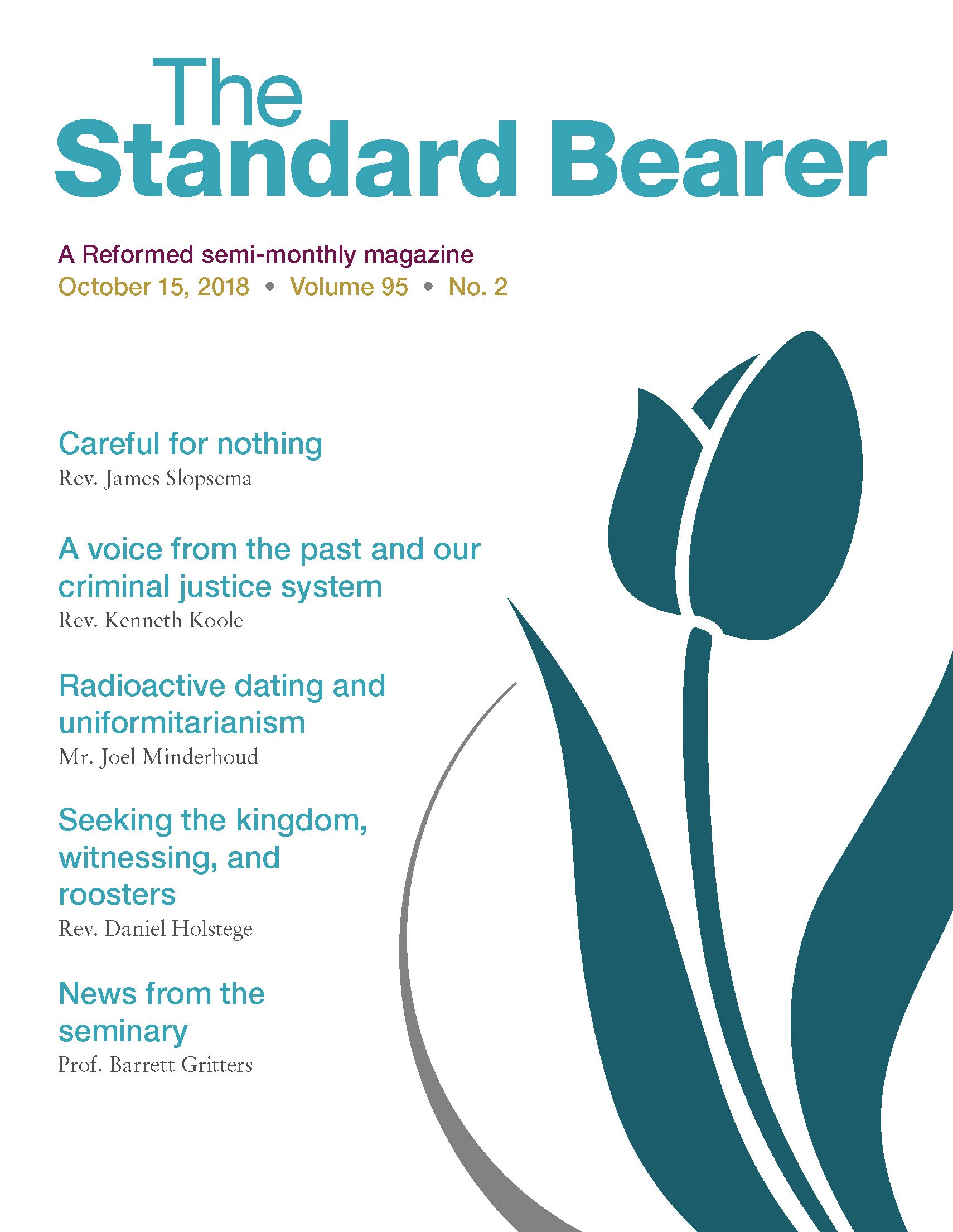