Radio broadcasting is the latest, most up to-to-date form of mission work. It has this great advantage that it knocks at the door of hundreds, or even thousands of homes at the same time, and gains admittance whereever there is interest in religious programs, thereby reaching many that could hardly be reached in any other way.

There is a wide variety of such programs on the air particularly on Sunday, so that a simple turn of the dial frequently carries the listener from a Jewish to a catholic, from a denominational to an undenominational broadcast of various faiths.

One cannot help but marvel as he listens to some of these programs, particularly to those on a nationwide hook-up, that such superficial and empty messages can appeal to a sufficiently large audience to warrant their remaining on the air from week to week and from year to year. This does not speak very well for the spiritual appetite of the religious elements of America, but does reveal a rapid growth of the apostate Church.

Nor can a person help but feel that mission work frequently is understood to mean nothing more than “winning souls”, rather than proclaiming the Gospel of Jesus Christ, the glad tidings unto the praise of the God of our salvation.

Rut rather than writing about mission work in general through the channel of the radio, I would rather limit my subject to radio broadcasting in connection with our mission work as Protestant Reformed Churches. I do this even though fully aware of the fact that I can write only as an interested observer who has taken no active part in radio work itself, nor in the various discussions held on this subject in committees and in our Synodical gatherings, but who only looks on from the sidelines.

As most of us know, the matter of our own radio broadcasting has been a subject of discussion from various angles from time to time. And it is also well known that our churches are already engaged in radio work in no less than three different communities in our denomination. “The Protestant Reformed Hour” is in its second year over a station in Grand Rapids, while the Churches of Northwestern Iowa and Minnesota are also in their second season of broadcasting, and our Redlands Church has also undertaken to broadcast on its own initiative.

These various efforts deserve our interest and our liberal support since there can be no doubt but that we have a distinct calling as Protestant Reformed Churches to make use of the radio as one of the available means for doing mission work.

Overagainst an abundance of superficial preaching, which is mainly even a flagrant departure from the truth of the Scriptures, man-centered instead of God-centered, it is our calling to tell the praises of the ever-living God by maintaining the absolute sovereignty of His Name. Particularly times like these present a definite challenge. Philosophies concerning a universal love and common grace of God, a love of man to man and the good that sinners do, must now suffer shipwreck on the rocks of internecine warfare. Times which challenge us to declare the sure sovereignty of God whose blessing is upon His people, and whose curse is upon the wicked.

By means of the radio we can also reach those who could not possibly be reached in any other way. Many people of Reformed persuasion are entirely held in ignorance or even misinformed about the teachings of our Protestant Reformed Churches. People who, nevertheless, have a sound, Reformed background and are even frequently aware of certain departures from the truth in their own churches. The radio offers an opportunity to teach them and acquaint them with our preaching.

Availing ourselves of this opportunity we can continue to fulfill our Mission mandate and at the same time we may be able to gain an open door for the more personal contact and labors of our missinary.

What many of our people may not know, is that the matter of radio broadcasting in connection with our mission work has been discussed at our last Synod and promises to appear on the agendum again this year.

The reason I state that many of our people may not know this is because our church papers have maintained an almost complete silence on all the actions taken on our last synodical gatherings. Anyone who was not present at those meetings hardly knew whether the Synod had even met. About three or four months later, when most of us had forgotten all about the meeting, the Acts of Synod finally appeared. Then the consistory members, who were privileged with receiving a copy of the Acts, and a few others who availed themselves of the opportunity to buy a copy, could acquaint themselves with the decisions that were made. All of which is conductive toward killing, rather than fostering the interest of our people in our synodical meetings.

Rather than offer an apology for this digression, I cherish the hope that in the future more consideration will be taken of the interest of our churches at large in our broadest ecclesiastical gatherings.

But to return to the matter at hand, our last synod did consider radio broadcasting as one of the channels for mission work. The mission committee came with the recommendation that “our churches start radio broadcasting, regulated, supervised and financed synodically”, with the purpose “to propogate our Protestant Reformed truth and in this manner further the cause of our church extension work.”

This recommendation seems to have been accompanied by a “minority report” of the Western division of this committee, which differed with the Eastern division on the advisability of beginning radio broadcasting, synodically supervised, at this time. Their objections were that the radio broadcasting lacks the personal contact necessary in missionary endeavors, and that, to be successful, it would lay too great a financial burden upon our churches. They also objected that synodically supervised radio work would destroy all personal initiative to carry on that work in a local community. And finally, that this matter should not be imposed on the churches by a committee of ithe Synod, but should be brought to Synod by way of consistory and Classis.

The committee of pre-advice, appointed to investigate this matter and serve the Synod with advise saw two parts in the recommendation of the Mission Committee, and reported as follows:

“The first concerns supplementing the labors of the missionary by radio broadcasting to be done by the missionary in the locality in which he is stationed. We advise Synod to empower the missionary so to supplement his work as opportunity offers and as the Mission Committee deems advisable and financially possible. Such labor may indeed serve to prepare the field for further personal work and contact. It would also be missionary work in the full sense, since it is the calling of the missionary to preach God’s Word to outsiders, as is ‘the case over the radio.”

The second matter deals with the question of our church entering the field of radio work even apart from the work of the missionary, and henceforth to bring all radio broadcasting in our midst under synodical supervision and support. The point here is, whether all broadcasting with which the name of our churches is used ought to be done synodically and not otherwise. We believe there are questions of principle involved in synodically supervised broadcasting that can be investigated and ought to be prior to our entrance into this matter, e.g., Is radio broadcasting ministry of the Word, even when done by a minister not called as a missionary? There are other questions, equally of a principle nature. We believe there is just reason to appoint a committee to investigate these principal questions. Besides, there is the matter of financing any radio work on a large scale. We suggest that Synod appoint a committee of five to study this matter, and report to the next synod; and further, that this report be mimeographed, and copies distributed to all officebearers for study by the consistories, and by the classical bodies, prior to the next synod.

This advice was adopted by the synod, which means that the question of synodically supervised broadcasting is due to come up for discussion at the next synod at which time the committee on radio work will very likely be ready to report. We may hear more of this in the future.

In the meantime, ithe question arises whether the synod should not have approached the matter of radio broadcasting in connection with mission work from another angle. It even seems somewhat questionable whether the Mission Committee actually intended to place Synod before the question as stated by the committee of pre-advice “whether all broadcasting with which the name of our churches is used ought to be done synodically and not otherwise.” And as the matter now stands, there is a possibility that our next synod may discuss the principal question without ever coming to a practical plan of action.

It is not difficult to conceive of other possibilities. For example, Synod could authorize the Mission Committee to consider the advisability of using the radio as a channel of mission work through some local consistory or group of consistories entirely independent from any radio projects that are being sponsored by local initiative.

The advantage of this would be that the mission work done by the Mission Committee through the means of the radio would in no way displace or interfere with radio broadcastings which are now the undertaking of local groups. To my mind, it would also remove any possible objection against synodically supervised broadcasting. And it would also be possible for us to reach new fields where there are as yet no Protestant Reformed Churches or where local groups could not posibly finance such an undertaking.

Whether the Mission Committee had this in mind or not makes no real difference; it is worth considering. Mission work through the channel of the radio is worthy of our wholehearted support. 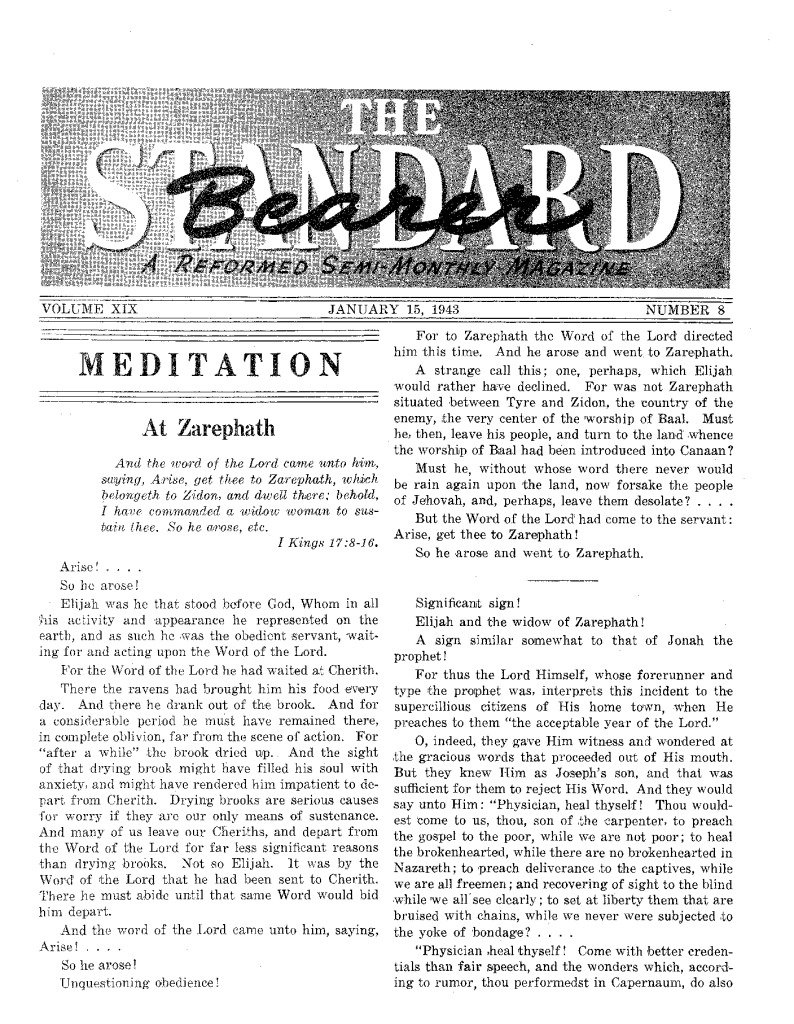