The editor has asked the undersigned (a former Washingtonian) to answer two interesting statements offered by Mr. Lionel Woodworth, a subscriber, of Spokane, Washington. First, he writes:

In reading the article on dispensationalism on pages 176 to 178 of The Standard Bearer for January 15, 1967, I was puzzled by the apparent contradictions between it and the writings of various dispensational theologians. For example, Reverend Harbach writes that “Dispensationalists claim much of both Testaments belongs not to us.” In contrast, Dr. G. Coleman Luck, chairman of the Department of Theology of the Moody Bible Institute, writes that Dispensationalists “insist that no part of Scripture must be relegated to some other age with the foolish statement that it has nothing to do with us at all, ” and goes on to quote II Tim. 3:16; I Cor. 10:11 and Rom 15:4 (Good News Broadcaster, June 1966, p. 11).

Answer: The quotation above given is really no contrast to the statement made in the January article; it is, in fact, a practical admission of the statement. Notice, it is not said in the words posed that dispensationalists “insist that no part of Scripture must be relegated to some other age.” Whoever would come with that statement would not be dispensationalist after all! For that is what the dispensationalist does — he relegates certain parts of Scripture to some other, a past, the present or a future, age. For example, the undersigned was taught in the dispensational school founded by C. I. Scofield that the Sermon on the Mount is not the standard for the Christian, in the Church, but is the constitution of the earthly kingdom of the Jews in a future millennium. Expressions may be found like this, and worse, in Scofield’s introduction to the Four Gospels and in his notes on the Gospel According to Matthew. What the above statement maintains is that dispensationalists “insist that no part of Scripture must be relegated to some other age with the foolish statement that it has nothing to do with us at all (ital. added).” Now that is something else. But who charges dispensationalists with such a foolish statement? Certainly we do not! On the basis of II Tim. 3:16, dispensationalists will admit that certain portions of Scripture do have something to do with us, in that they are profitable for instruction. We may be instructed, for example, as to what belongs to Israel and what belongs to the Church. But what belongs to the Jew, viz., the so-called “earthly promise,” does not apply to us. It cannot be said that such “promises” have nothing to do with us at all. They have something to do with us, but (so the theory goes) they do not specifically intend, and so are not for, us. The posed statement, because it contains an error, and because it refers to an absurdity not ours, is enervated.

The Reverend Harbach also writes: “Dispensationalism does go to the extreme of belittling the Old Testament, its importance and value.” In contrast again, Dr. John F. Walvoord, president of Dallas Theological Seminary, Dallas, Texas, has written: “The recognition of proper dispensational distinctions has often been the means of opening a Bible previously closed. Laymen trained in non-dispensational interpretation have found great portions of the Old Testament without meaning. Once these were understood in their normal and natural sense as providing a prophetic program for the present and future, the Bible became an open book (,i>Good News Broadcaster, December, 1966, p. 9).”

I believe that more people than I may be confused by the seemingly serious disparities between the Rev. Harbach and Doctors Luck and Walvoord as to the theological teachings of Dispensationalists.

Answer: The above dispensationalist remark happens to contain a rather general reference to “the Old Testament.” The words Old Testament are used, but the term “Scripture” could just as well have been employed instead. The statement therefore does not specifically contend for the Old Testament. It rather implies that anyone unequipped with the benefit (?) of “dispensational distinctions” will find, not merely the Old Testament, but the Bible, a closed book, in fact, a meaningless book. But with this assumed superior light provided by these “proper distinctions,” the Bible is claimed to become an open book, which not at all necessarily means that the Old Testament is given such esteem as views it a revelation integral with the New Testament, containing essentially the same message as the New, and directed equally with the New to the Church of all ages. It is a belittling of the Old Testament and a serious error to teach that the Church began no earlier than Pentecost, and that therefore there was no Church throughout the Old Testament dispensations. Read further the forthcoming series on the subject. Anent the so called “theological teachings of Dispensationalists,” it is rather well known that they have denounced all creeds, and have manifested a contempt for theology and theologians, largely because the historic creeds and theological systems contain nothing of the doctrines they deem essential and claim to have rediscovered. (Cp. Prophecy and the Church, O.T. Allis, Pres. & Ref. Pub., Phila., 1945, pm 16). 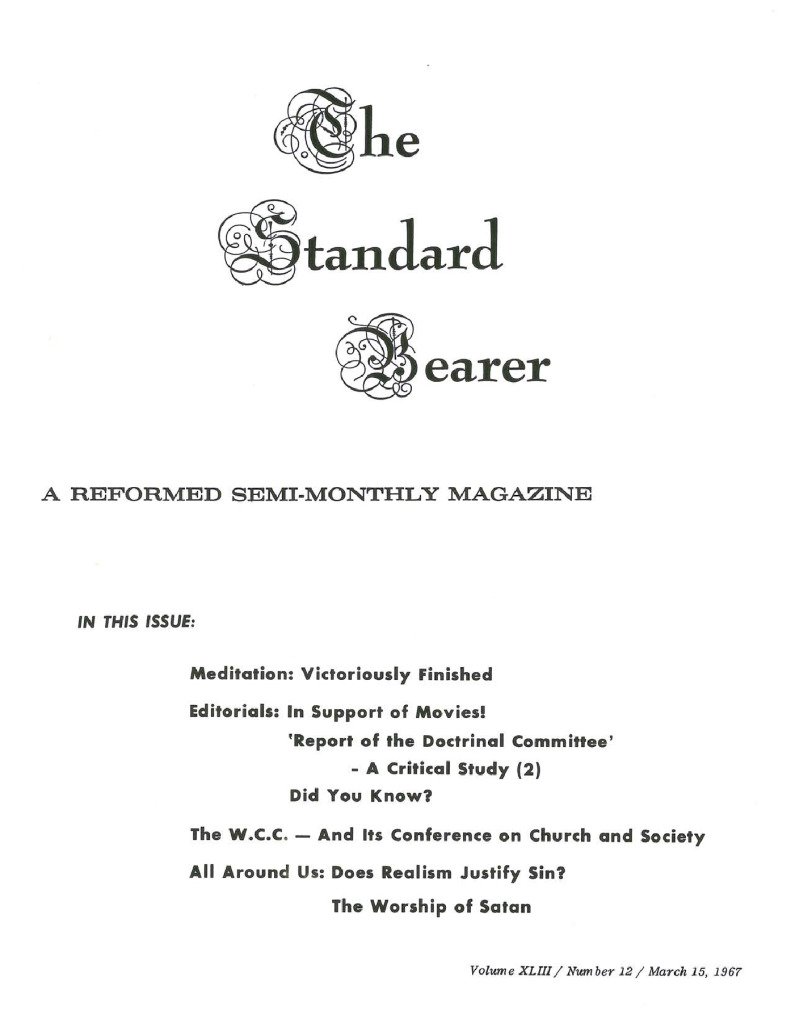