Questions About The Ten Plagues

Questions About The Ten Plagues

From the Men’s Society of Hope Church, Grand Rapids, I received several questions which deal with Israel’s place in the plagues which the Lord sent upon Egypt. I will quote the questions from the secretary’s letter:

First of all, welcome to our question box. May your example be followed by others, especially if the questions deal with such interesting subjects. Our question box gathers a good deal of dust through disuse, and I encourage its use.

I will answer your last question first. For if the suggestion made in that question is correct, namely, that Israel did not suffer the plagues at all, then the other questions fall away. It seems to me, on the basis of the Scriptural record, that the Lord made no distinction between Israel and the Egyptians until the fourth plague, that from the fourth plague on this distinction was made, and that in the ninth and tenth plagues this distinction became still more precise, i.e., a distinction that involved their houses. My reasons are as follows: 1) Not until the fourth plague is there any mention of distinction; and then the mention is very emphatic, Exodus 8:22-23: “And I will sever in that day the land of Goshen, in which my people dwell, that no swarms of flies shall be there; to the end thou mayest know that I am the Lord in the midst of the earth. And I will put a division between my people and thy people: to morrow shall this sign be.”

2) The same is true of the fifth plague (the murrain),Exodus 9:4: “And the Lord shall sever between the cattle of Israel and the cattle of Egypt: and there shall nothing die of all that is the children’s of Israel.” This time Pharaoh even checked up to see whether Israel’s cattle were exempt, 9:7.

3) Also the sixth plague (the boils) was only upon the Egyptians. For while no direct mention is made of a distinction, the implication of 9:11 is clear: “And the magicians could not stand before Moses because of the boils; for the boil was upon the magicians, and upon all the Egyptians.”

4) From the plague of the hail the Israelites were also exempt: “Only in the land of Goshen, where the children of Israel were, was there no hail.” Exodus 9:26.

5) In connection with the eighth plague (the locusts) we do not read of a specific exemption. By this time the exemption was well established; besides, we do indeed read in 10:5, 6 that the plague was directed against the Egyptians: “…and they shall eat the residue of that which is escaped, which remaineth unto you (the Egyptians, H.C.H.) from the hail, and shall eat every tree which groweth for you (the Egyptians, H.C.H.) out of the field: And they shall fill thy houses, and the houses of all they servants, and the houses of all the Egyptians…..”

6) In the ninth plague “all the children of Israel had light in their dwellings.” Exodus 10:23.

7) And, as is well known, in the tenth plague, only those houses which were covered by the blood were passed over by the angel of death.

In the light of the above data, anyone who would maintain that Israel was also exempt from the first three plagues must answer three related questions: 1) Why is there no mention of any exemption in connection with the first three plagues? 2) Why is there sudden mention of such exemption beginning with the fourth plague? 3) And why does Scripture even call special and emphatic attention to this exemption? I know of no satisfactory answer to these questions if Israel was already exempt from the first three plagues; It seems to me to be very plain, on the contrary, that it was part and parcel of God’s dealings with Pharaoh, of the increasing clarity of His testimony against Pharaoh and of the progress in His hardening of Pharaoh’s heart, that the Lord made sharp distinction between Egypt and Israel beginning with the second set of three plagues.

The first two questions from Hope’s Men’s Society are closely related. I would suggest the following elements by way of answer: 1) As far as the event of the plague itself was concerned, Israel suffered the first three plagues in the same way as the Egyptians. This is God’s usual way of dealing with His people in the course of history. And there is nothing strange in it, from this point of view, that when these judgments came upon Egypt, the Israelites, who lived in the same land, experienced them also. When God’s judgments are in the earth, God’s people suffer also. Rain and sunshine, flood and drought, plenty and famine, prosperity and depression, war and peace, lightning and hail, tornado and hurricane, health and pestilence, — all these befall the wicked and the righteous in common. 2) As far as the motivation and the purpose are concerned, however, essentially God always makes distinction. Just as grace is not common, so wrath is not common. God’s people are sanctified and saved through the same means that the world is embittered and destroyed. And is this not clearly illustrated here also.

3) Whether we can say anything specific as to why God caused Israel to suffer under the first three plagues? First of all, I would point to the fact that Scripture’s main emphasis is upon God’s purpose with Pharaoh through the plagues; and the Bible does not say anything directly about this question. Secondly, I would suggest that there is a strong reminder of the fact that there is no natural difference between Israel and Egypt; Israel was not by nature exempt from these judgments. Any difference between Israel and Egypt was purely a matter of divine and sovereign distinction. The Lord Himself made separation. Thirdly, by way of contrast, what a marvelous sign and what a sure comfort it was to God’s people when at the fourth plague He made this separation. In the fourth place, I can agree that the general purpose of the Lord was to humble and sanctify His people. Israel had much to learn, as we know from subsequent history, before they entered the land of Canaan. And these plagues belonged to that sanctifying process. And finally, I would suggest that the suffering of these plagues also served as a later testimony against the rebels in Israel who longed for the fleshpots of Egypt. What was the Egypt for which they longed? It was the Egypt which had made their own situation perfectly galling and impossible in the bondage; and it was the Egypt of which they knew by experience that it was the object of God’s wrath and judgment.

I hope that these suggestions will help Hope’s men. If not, call again! The entire subject of the ten plagues is indeed an interesting subject and warrants thorough study. 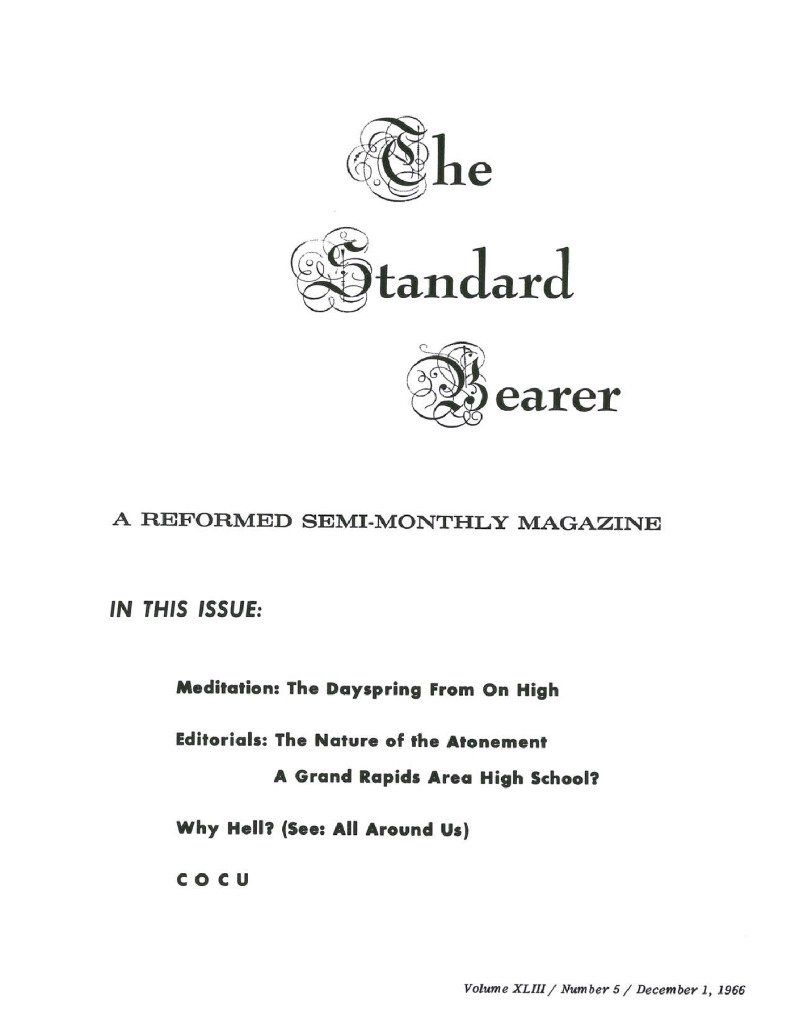